Study on observation of tongue patterns in young adults.

Introduction: The tongue is a unique organ in the oral cavity with unique patterns on its surface. Apart from speech & deglutition, it can be used for individual identification. Materials and Method: Photographs were taken from 20 young individuals. Alginate impressions of the tongue were obtained and a positive cast replica was made to evaluate the shape, size, number and type of fissures and presence of papillation on the surface of the tongue. The study aimed to observe the variations and uniqueness in tongue patterns among the young individuals. Results: Differences in the tongue patterns with different combinations of the size, shape, papillation & fissures in each individual were observed and were found to be unique. Conclusion: The tongue impression can be a useful tool in the identification of an individual because of its uniqueness.

The tongue is an important organ in the oral cavity that is used for various functions such as speech, perception of taste and swallowing. It is an internal organ enclosed and well protected in the Rima Oris from the external environment which can be protruded and displayed for inspection and palpation purposes [1]. Tongue is divided into two parts, anterior and posterior parts by the terminal sulcus which is a V shaped groove. The anterior 2/3rd is called the oral part and the posterior 1/3rd is called the pharyngeal part. The left and right portion of the tongue is separated along the length by a vertical section of fibrous tissue, the lingual septum that results in the median sulcus. The dorsal surface of the tongue is covered with numerous papillae and taste buds [2].

The human tongue differs from person to person in various morphological aspects such as shape, size, texture, papillation, color, margin, grooves, and fissures on the dorsal surface of the tongue which is also known as tongue patterns. Many biometric systems are currently in use such as fingerprints, iris scan, and voice recognition and face recognition. Biometric authentication is an important process for the identification and verification of individuals and has gained popularity in recent years. The search for a new personal identification method has led to the use of the lingual impression or tongue print as a new biometric authentication tool that is unique, as it exhibits dimorphism thus aiding in the identification of the person. It is strenuous to manipulate or forge it, unlike other identification systems. The uniqueness of the tongue print is that no two tongues are similar and studies have found that even the tongue pattern of identical twins also do not resemble each other1. Thus there is a higher level of assurance to use tongue prints for identification purposes [2].

The tongue is an organ by itself and is also unique. It is the only organ that can be easily drawn out of the oral cavity and observed by inspection and palpation. Based on analysis of its shape, texture and color in a particular movement, the lingual impression can be easily used for identification [3]. The impression taken from the surface of the tongue is called a lingual impression. The shape of the individual tongue is constant, and its physiological textures are invariant even as the coating of the tongue changes [4]. The analysis of the lingual morphological aspects preserved using the alginate molding technique, the most reliable technique for duplicating the mostminute details, represents a criterion with a force of evidence upon uniqueness for each and every individual l.3. Hence, this study is conducted to determine and observe various tongue patterns and their characteristics in young adults.

This study was conducted on 20 young individuals (14 females and 6 males) with an average age of 24 years, over a period of 3 months. The participants were selected based on the following inclusion and exclusion criteria. The inclusion criteria were

Informed consent was obtained from the participants followed by visual examination of the tongue. After gently rinsing the oral cavity with water and cleaning with sterile gauze, the individuals were asked to protrude their tongue in a relaxed position.

Photographs were taken using a Nikon D 5200 camera. The height and distance of the camera were taken in a combination to ensure good quality images. The light was adjusted accordingly. The patient was asked to sit upright with a proper headrest. The frontal view of the tongue was captured. This was followed by alginate impressions. Alginate was applied directly on the tongue from the commissure of the mouth to the tip of the tongue and the impression was retrieved after the material attained its primary setting time. A positive replica was made from the impressions using dental stone (Type II). The casts were then observed for:

Shape analysis was done with a three-point method and lines joining the three points1. (Figure 1). The size of the tongue was analyzed by measuring the cast and recording the length and breadth in millimeters (Figure 2). 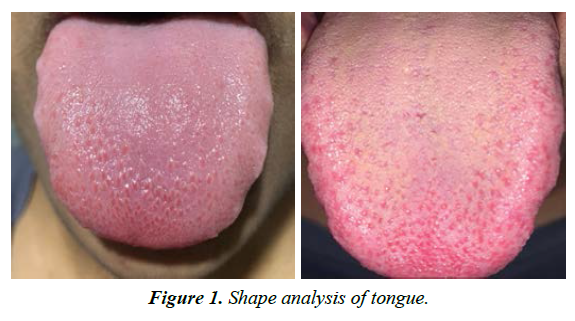 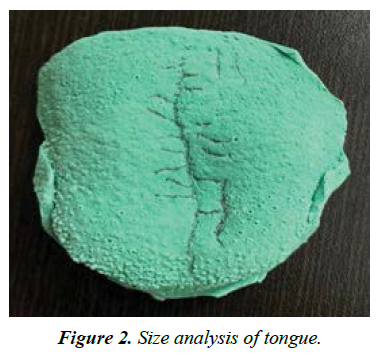 Fissures were analyzed by categorizing them as prominent or not prominent. If prominent, it was further categorized based on the direction and location: central, vertical, and oblique. The number of fissures of each type was also recorded. (Figure 3,4 & 5)

Figure 3: Depicting presence and absence of different types of fissure. 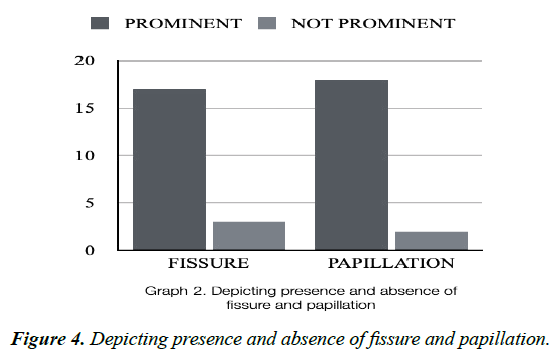 Figure 4: Depicting presence and absence of fissure and papillation. 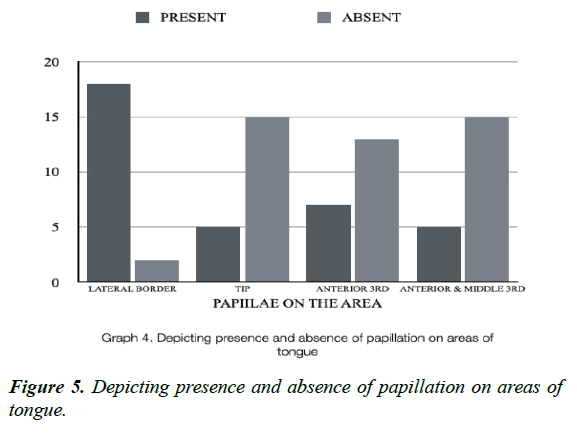 Figure 5: Depicting presence and absence of papillation on areas of tongue.

Papillae were also observed whether they were prominent or not prominent. If prominent, it was further categorized on the area where the papillation was prominent i.e. on the lateral border of the tongue, tip anterior 3rd and middle 3rd of the tongue. (Figure 6 & 7) 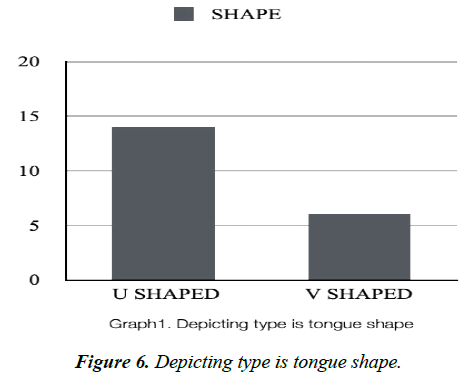 20 individuals participated in this study. After the positive replica of the impressions was obtained, the casts were analyzed for shape, size, number and direction of fissures, prominence of papillae along with their distribution.

The tongue is an organ by itself and is unique in various aspects. Simple visualization of the tongue also enables an individual to distinguish between healthy and unhealthy conditions. All the participants included in our study did not have any pathology of the tongue nor any habits nor systemic illness. Thus this study can be used as an insight for the identification of an individual using tongue patterns. Tongue presents both geometric shape information and physiological texture information which can be potentially used for identification purposes.

It has also been considered in traditional Chinese Medicine as the organ of life.4 The human tongue differs from person to person in various morphological aspects such as shape, size, texture, papillation, color, margin, grooves, and fissures on the dorsal surface of the tongue which is also known as tongue patterns. The search for a new personal identification method has led to the use of the tongue pattern as a new biometric authentication tool that is unique. Tongue prints show an advantage over other biometric systems in genetic independence and its protection in the oral cavity. Not much work has been done in the tongue print recognition system [5]. A study by Diwakar and Maharshi reported tongue as a reliable member of the biometrics family using image stitching and 3D stereo reconstruction [2]. A preliminary study was done on tonguebased forensic identification by Stefanescu et al also proposed the use of alginate impression in obtaining lingual impression as an efficient technique3. In our study, we have used alginate impression and found it to be an efficient and reliable method of recording tongue patterns. The dorsal surface of the tongue provides significant details from a morphological, physiological and structural point of view. It was a chair side procedure and does not require any specialized instruments.

In the present study, we observed the shape, size, fissures (prominence and type) and papillation (prominence and area of its prominence) of the tongue. U shaped tongue was more commonly seen compared to the V shaped tongue with 11 females and 3 males with U shaped and 3 females and 3 males with V shaped tongue. Other studies conducted by Jeddy et al, Stefanescu et al and Johnson et al also showed prominence of U shaped tongue [2-4]. This infers that the U shape tongue is more commonly seen. In the present study, fissures were prominent in 17 participants in which a single central fissure was observed in 9. Vertical fissures were observed in 13 individuals ranging from 1-9 fissures in each. Oblique fissures were predominant in 11, with a minimum of 1 oblique fissure in a cast to a maximum of 17 oblique fissures in another. This shows that every individual has variation in the distribution of fissures. Differences were also observed in their direction.

Based on the characteristics, morphological features and pattern of the tongue a working classification was given by Vijay P, Sharma S et al.

Size of the tongue

Shape of the tongue

Margins of the tongue

Tip of the tongue

A study done by Jeddy et al focused on the direction and depth of fissure and shape of the tongue with a gender-wise distribution of both and concluded that the database can be used for identification purposes1. A study conducted by Zhang et al developed a 3D tongue print image database using the 3D images of the frontal and profile view of the tongue 4. The color, shape, size and texture of the tongue were also observed on the photographs obtained from the patient. The clinical findings were then correlated with the positive replica of the tongue and reaffirmed the observations. Johnson et al conducted a study using photos and alginate impression, classified the dorsal surface of the tongue according to shape and texture of the tongue and concluded that the data of the oral cavity can help in identifying individuals and provide information of the human tongue which delivers a different level of uniqueness [7]. Garg et al classified the border of the tongue into smooth, partial scalloped and scalloped [8] Tooth indentations around the edges of the tongue form a scalloped border. It can be created by the negative pressure produced by parafunctional behaviors in the oral cavity. A scalloped tongue can also result from macroglossia, an irregular tongue enlargement found in nutritional deficiencies, systemic diseases and genetic disorders. The scalloped tongue was observed more in males compared to females [9]. Ménard et al used ultrasonic imaging to measure tongue shapes and position; sections of the tongue were extracted to simulate ultrasound imaging. Various transformations were applied to the tongue contours in order to simulate ultrasound probe displacements: vertical displacement, horizontal displacement, and rotation [8,10]. A study conducted by Venkatesh et al observed the depth of the fissures on the tongue and found that the shallow fissures were more in number compared to deep fissures [11]. Various studies were conducted for biometric analysis using different algorithms systems and modern techniques showing variation in each and every tongue algorithm [12,13].

With recent advances in science and technology, various identification systems have been introduced making use of 2D dual-tree wavelet transform and tongue scanning methods [15]. Our study highlights the various morphological parameters which can be used for the identification of an individual using the simple chair side technique. We observed various morphological aspects of the tongue and can conclude that every individual has a unique set of tongue pattern.

The morphological aspect of the tongue differs from individual to individual and can provide relevant information to be used as a potential secure method for identification.