Oxidative stress and protective antioxidants are the newer aspects of human infertility. This study evaluated the extent of oxidative stress by measuring lipid peroxidation end product, malonaldehyde (MDA) and the role of potent non- enzymatic antioxidant, reduced glu-tathione in the seminal plasma of human subjects with different fertility potential. Semen samples from 48 normozoospermic controls, 34 oligoasthenoteratozoospermics, 34 as-thenoteratozoospermics, and 32 azoospermics were analyzed for physical (sperm concentra-tion, motility, morphology) and chemical (MDA, reduced glutathione) parameters. Signifi-cance of difference among the groups and coefficient of correlation between the parameters was tested statistically. MDA level was found to be significantly higher in the abnormal groups (oligoasthenoterato and asthenoteratozoospermics) than the normozoospermics (p< 0.01). Negative correlation was also found between MDA levels, sperm concentration, sperm motility and sperm morphology. Levels of reduced glutathione were found to be signifi-cantly higher in normozoospermic than the other abnormal groups (p < 0.01). Moreover, it was found to be correlated positively with all seminogram parameters and negatively with MDA level. The study revealed that high lipid peroxidation is associated with diminished fertility potential where as reduced glutathione has a positive correlation with seminogram parameters.

Numerous factors may influence male fertility among which oxidative stress has developed interest among the researchers in recent period. Oxidative stress occurs when the delicate balance between the production of reactive oxygen species (ROS) and the inherent antioxidant capac-ity of any system is distorted. ROS are highly reactive oxidising agents belonging to the class of free radicals containing one or more unpaired electrons [1] which are continuously being generated through various metabolic & pathophysiologic processes in our system. The excess of ROS can damage the living cell at different level like cell membrane, cellular proteins, nuclear DNA etc. lead-ing to different morbidity.

Human spermatozoa are especially susceptible to ROS as their plasma membrane contains polyunsaturated fatty acid in abundance which can undergo a chain of chemical reactions after getting attacked by ROS, called lipid per-oxidation which is grossly damaging to the sperms. They also lack cytoplasm to generate robust preventive and repair mechanism against ROS [2]. One of the important markers of oxidative stress is malonaldehyde (MDA), which is an end product of lipid peroxidation. High levels of MDA represent high lipid peroxidation rate which may cause changes in sperm and diminish fertility [3]. How-ever, there is controversy about the seminal MDA activity and the sperm quality. Suleiman et al [4] demonstrated that the MDA concentration in the seminal plasma was not correlated with sperm concentration and motility which however, contradicts findings of a number of pre-vious studies [5,6].

Antioxidants are known to dispose, scavenge, suppress the formation of ROS or oppose their action. An import-ant endogenous antioxidant in human is reduced gluta-thione (GSH), a sulphydryl containing tripeptide (gamma glutamyl cystenyl glycine) which plays a central role in the defense against oxidative damage and toxins. It serves as a co-factor for glutathione peroxidase and glutathione S- transferase and can react directly with hydrogen perox-ide, super oxide anion, hydroxyl and alkoxyl radicals by its free sulphydryl groups. When present extracellularly, GSH is able to react directly with cytotoxic aldehydes produced during lipid peroxidation [7].

Glutathione has been detected in various concentrations in male reproductive tissues in different species including human being. Its presence has been noticed both intracel-lularly within the sperm as well as extracellularly in the seminal plasma. Fertility promoting role of glutathione has been established through different studies where glu-tathione has been found to be reduced in oligo and azoo-spermics than normospermics [8]. Moreover, in some clinical trial glutathione when given exogenously to infer-tile men, was found to cause significant increase in sperm motility, particularly forward progression [2]. However, studies have shown a higher concentration of glutathione in the seminal plasma of azoospermics than the oligo or normozoospermics [9]. In our present study attempt was made to assess the oxidative stress by measuring MDA levels of the seminal plasma in human subjects with dif-ferent fertility potential and at the same time to measure the levels of reduced glutathione in the seminal plasma of the same subjects. Correlation between the MDA levels and fertility potential as well as MDA level and reduced glutathione were tested statistically.

Semen samples were obtained from 148 male patients of 21-58 yrs of age attending the Reproductive Biology Unit, MGIMS, Sevagram, with complaints of infertility (both primary and secondary infertility cases). Detailed history of present and past illness as well as medical and surgical management was taken. Selected male partners were un-derwent thorough surgical examination of genito-urinary system to rule out the exclusion criteria. Subjects with normally developed genitor- urinary organs were included in the study. All the tests were conducted with due per-mission of the ethical committee of the Institute and with written consent from the subjects. Specimens of semen were collected by masturbation after 3 days of sexual ab-stinence. After complete liquefaction, samples were ana-lyzed by SQA II B sperm quality analyzer (M.E.S. Ltd., Israel) for sperm concentration, motility, morphology ac-cording to WHO guideline [3] and grouped into four categories with following criteria:

Persons with sperm concentration of 20 millions/mL or more, sperm motility of 50% or more (a+b type motility), normal sperm morphology of 30% or more.

Persons with sperm concentration of 20 millions/mL or more, sperm motility below 50% (a+b type motility), normal sperm morphology in less than 30 % of sperms.

Total absence of spermatozoa in semen (even after cen-trifugation). Except for the normozoospermics, all other subjects with abnormal seminogram profile were asked to come for repeat semen analysis after 1 month. If the sec-ond report was also abnormal then they were included in the abnormal groups and the semen samples were utilized for further physio-chemical assessment.

MDA levels were measured as per Thiobarbituric Acid (TBA) method described by Yao-Yuan Hsieh et al [6]. Semen sample was centrifuged at 3000 rpm for 10 min-utes after liquefaction to get the seminal plasma. Then 0.1 mL of seminal plasma was added to 0.9 mL of distilled water in a glass tube, to it 0.5 mL of TBA reagent (0.67 gm of 2 – thiobarbituric acid dissolved in 100 mL of dis-tilled water with 0.5 gm of NaOH and 100 mL of glacial acetic acid) was added and then heated for 1 hour in a boiling water bath. After cooling the tube was centrifuged for 10 minutes at 4000 rpm and the supernatant absorb-ance was read on a spectrophotometer at 534 nm.

The GSH concentration in seminal plasma was measured according to the method of Beutler et al [11]. 0.2 ml of seminal plasma and 1.8 ml of distilled water were mixed with 3 ml of precipitating solution (metaphosphoric acid 1.67gm, disodium EDTA 0.2 gm, NaCl 30 gm in 100 ml distilled water). After allowing to stand for 5 minutes, the solution was filtered. 1 ml of clear filtrate, 4 ml of freshly made disodium hydrogen phosphate (4.6 gm/L) solution and 0.5 ml of DTNB reagent (5,5’dithiobis-2- nitro ben-zoic acid: 20 mg in 100 ml of citrate buffer) were added. Absorbance of the yellow colour developed was read in spectrophotometer at 412 nm.

The differences of mean values of MDA and reduced glu-tathione in different groups were evaluated statistically using ANOVA test (p < 0.05 was considered statistically significant). The relationship between different parame-ters was tested by calculating coefficient of correlation (r- value). All the calculations were done by using STATA 10 software. 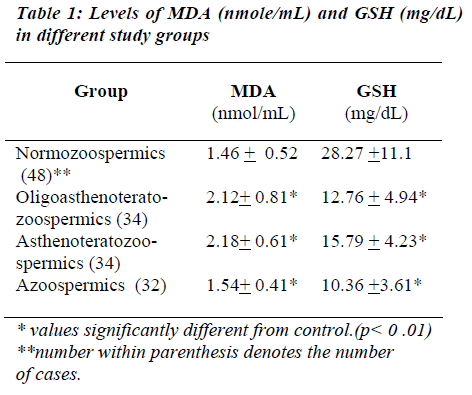 In recent years, it is evident from different studies that oxidative stress has a definite role in inducing male infer-tility. Kobayashi et al [12] demonstrated that MDA con-centration in spermatozoa was significantly related to the number of immotile spermatozoa. Elevated MDA levels were also noted by Fraczek et al [5] in oligoasthenotera-tozoospermia. In our present study, we also found signifi-cantly higher levels of MDA in the seminal plasma of the abnormal groups (including oligoasthenoterato and as-thenoteratozoospermics). A negative correlation observed between sperm concentration, motility and normal mor-phology and seminal MDA levels was in agreement with the findings of Yao-Yuan Hsieh et al [6]. In our present study, high lipid peroxidation was found to be associated with poor semen quality. However, MDA levels in azoo-spermics were found to be slightly higher than the normo-zoospermic group but not statistically significant. The amount of MDA can be attributed to leucocytic infiltra-tion as well as epithelial cellular castings [2]. However, the MDA production which remains unchecked due to lack of spermatozoal antioxidant enzymes like SOD may result in some what higher level of MDA in azoospermics than the normozoospermics. Information about seminal GSH levels and male fertility potential is quite inadequate till date. Moreover, there are lot of controversy and vari-ability in the findings. Daunter et al [13] showed a wide range of variability of seminal GSH level (5-170 mg/dL). In our study, mean level of GSH in seminal plasma of normozoospermics was found to be 28.27 + 11.10 mg/dL which is corroborative with the findings of Mann [14]. Oschendorf et al [9], however observed that there was no statistical difference between the GSH level of seminal plasma of patients with different fertility potential, nor there was any association found between the parameters of seminogram and reduced glutathione content of semi-nal plasma. In our present study, we however found sig-nificantly higher levels of GSH in seminal plasma of the normozoospermics compared to any other abnormal groups. In azoospermic subjects GSH levels were found to be the lowest. The source of seminal GSH remains scattered all through the male reproductive tract starting from the basement membrane of seminiferous tubule, Ser-toli cell cytoplasm, epididymis, a considerable contribu-tion comes from the spermatogenic tissues and is found to be deficient in subjects with azoospermia [9]. Moreover, we observed a positive correlation between sperm con-centration, motility and normal sperm morphology and the levels of seminal GSH. These findings were compatible with that observed by Bhardwaj et al [8]. We also found a significant negative correlation between GSH and MDA levels of seminal plasma. Therefore, GSH might have some fertility enhancing role by reducing lipid per-oxidation. It could therefore be proposed that the concen-tration of reduced glutathione, a non-enzymatic antioxi-dant of seminal plasma, could be used as a chemical pa-rameter to assess male fertility, whereas high levels of MDA can stand for poor semen quality. The beneficial role of GSH to minimize oxidative damage to the sperms can make it a suitable candidate for therapeutic usage in the treatment of male infertility. A series of clinical trial is needed to explore the possibility.

We are grateful to the Dean of MGIMS, Dr. S. Chhabra and Dr. P. Narang, the Hounarable Secretary of Kasturba Health Society, for all round logistic and financial support for this study.