The IT capital of India, Bengaluru in 21st century has seen an unprecedented increase in vehicular noise caused by exponential increase in the number of vehicles. With the steady rise of vehicular traffic in the city, policemen manning the traffic are being exposed to all kinds of health hazards. Noise not only affects hearing but also trigger the body’s stress response. The objectives were to measure noise levels at major traffic junctions in Bengaluru city and the association between noise levels and stress in traffic policemen. The study included 60 traffic policemen deputed at different junctions of Bengaluru. Informed consent was taken and ethical clearance was obtained. Road traffic noise was measured using sound level meter. Stress questionnaire which consisted of questions like sleep deprivation, tension, headache etc was administered to which the subjects responded on five- point likert scale. The stress levels thus obtained was correlated with noise levels using Pearson Correlation coefficient. Road traffic noise ranged from 71.2 to 91dB. There was a significant positive correlation between stress and noise level (r = +0.578, p =0.00). Present study showed there is a significant positive correlation between noise levels & stress. Higher the noise level more is the stress in traffic policemen. Hence some preventive modalities should be undertaken to prevent psycophysiological problems in long run because of job related stress in traffic policemen.

Noise pollution in mega cities is considered to be one of the most important and pressing problems. Increasing urbanization has led to mounting volumes of noise. Noise pollution is the extra, annoying, disturbing and physically harmful noise in the environment. The IT capital of India, Bengaluru in 21st century has seen an unprecedented increase in vehicular noise caused by exponential increase in the number of vehicles. In India, occupational permissible exposure limit for 8 hour time weighted average is 90 dBA [1,2]. Both the intensity of noise and the length of exposure determine its ability to damage hearing. Louder the noise one is exposed to, over a continued period, the faster it leads to hearing loss. Noise not only affects hearing but also trigger the body’s stress response. Not just loud or sudden noises provoke a stress response. Chronic low- level noise also negatively influences the brain and behaviour. Repeated exposure to even moderate levels of noise can be injurious to health, but often unap preciated are the more pervasive physiological and psychological effects [3]. Traffic constables play a very significant role in controlling traffic system especially in the metropolitan cities despite several limitations who are exposed to noise pollution for >8hours a day and these policemen engaged in controlling traffic noise, particularly at heavy traffic junctions; belong to the high risk group to be affected by health hazards of noise. The constable’s physical and psychological well-being is a crucial factor for enhancing their work efficiency [4].

Stress is defined as an upset in the body’s balance due to physical, mental or emotional stimuli and is one of the factors which hinder the activities of traffic policemen. Stress among policemen would manifest in the form of fatigue, depression, inability to concentrate and impulsive behaviour. Stress also has a negative effect on the health of the traffic policemen and makes them more susceptible to heart attacks and strokes. Noise health effects are the health consequences of elevated sound levels [4].

There is no doubt that noise is both a public health hazard and an environmental pollutant. Many of its effects are well known and many of its effects continue to unfold through research. With the above background, the present study has been carried out to estimate noise levels at major traffic junctions in Bengaluru and to study the association between noise levels & stress in traffic policemen so that some preventive modalities in the form of safety equipments and duty scheduling for exposure limitation can be suggested.

Noise levels were measured using Sound level meter at various points in Bengaluru. The Sound level meter is the instrument that displays the amplitude level of sound as its being recorded. In this study, sound level meter of 2231 type with the Front Plate BZ 7110 and software Module “M-11” was used. The amount of Peak, SPL (sound pressure level), SEL (sound exposure level), Leq (Equivalent continuous sound pressure level) and Maximum Peak were measured (Table 1). All the measurements were done in the peak of the traffic. Present questionnaire based study was carried out among 60 traffic policemen deputed at the junctions where noise levels were measured who were manning the traffic for >8hours per day. Informed consent was taken. Ethical clearance was obtained from Institutional Ethical Committee. The causation of sleep deprivation, headache, irritability resulting from other psychosomatic disturbances were ruled out based on disappearance of symptoms when traffic policemen were allotted different work atmosphere (traffic junction) where there was no interference of noise of high intensity. Then stress questionnaire (Table 2) which consisted of questions like sleep deprivation, tension, headache, difficulty in concentrating, making decisions or remembering things, excessive sweating, heart burn, arguments with co-workers, hypertension etc was administered to traffic policemen who were manning traffic (study group) to which they responded on five- point likert scale. The same stress questionnaire was administered to 35 traffic policemen who were involved in administrative work (control group) and were exposed to sound pressure level not more than 65dBA. Questionnaire was prevalidated and tested for reliability (cronbach’s alpha = 0.82). The stress levels (score) thus obtained was correlated with noise levels (sound pressure level) to which the traffic policemen were exposed.

The data was suitably arranged into tables for discussion under different headings. Descriptive statistical analysis was carried out on this data. Results on continuous measurements are presented as mean + standard deviation Significance was assessed at 1% level of significance. The Pearson correlation between stress level and noise level was done Conclusions are drawn based on the outcome of this statistical treatment.

The average age in the study group who were working in traffic junction of high intensity noise was 42.46+- 6.78years (mean+SD). Sound pressure level measured at various traffic junctions showed a mean and standard deviation of 80.86+6.33 dBA (Table 1). Analysis of the overall stress (Table 2) in traffic policemen who were manning traffic showed a mean score of 75.5 on a scale of 25-125 and a standard deviation of 10.25. Stress level was positively correlated (r = +0.578, p =0.00) with noise levels (Table 3). The results of the study in the traffic policemen who were involved in administrative work (control group) and not exposed to sound pressure level of >65dBA (61+2.23dBA) did not exceed score of 60 (50.5+5.25) on stress scale and showed a weak positive correlation with noise level (r=+0.22). 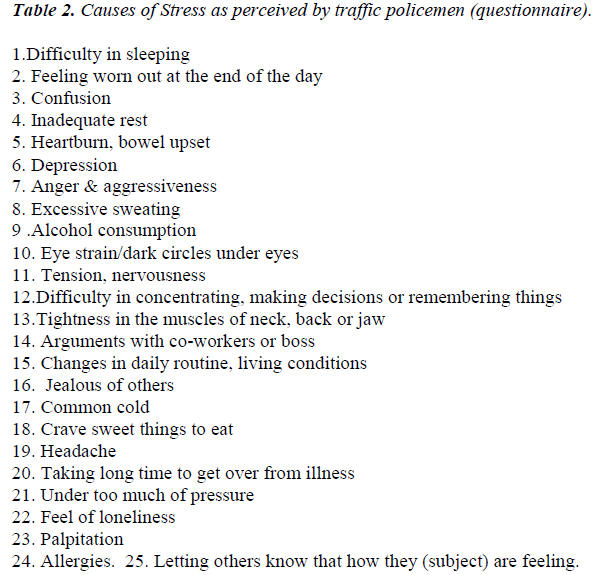 Table 2. Causes of Stress as perceived by traffic policemen (questionnaire).

Traffic policemen play a crucial role in maintaining traffic especially in the metropolitan cities like Bengaluru. In fact, without their efficient services it is next to impossible to keep the city function smoothly. At the same time, it is equally true that they are subjected to job related stress, which sometimes becomes unbearable for them. Literature indicates that there are minimal studies carried out to address the problems faced by traffic policemen in the metropolitan cities in India [4]. In India, occupational permissible exposure limit for 8 hour time weighted average is 90 dBA. Hence, the necessity of the present study was reinforced with a view to know the correlation between noise level and stress in traffic policemen.

Average acceptable noise level for human ear is 55 dBA (decibel, sound pressure level measured with “A” weighting network). In the present study, sound pressure level recorded ranged from 71.2 to 91 dBA. Prolonged exposure to high noise levels can lead to irreversible nerve damage and also affect hormones (corticosteroids or cortisol) and lead to psychological problems in the long run. A survey in January 2009 listed Bangalore as the noisiest state capital in India [5]. In a study done in Cairo traffic policemen, noise level ranged from 72-110 dBA [6]. A study done in thirty-two points in Kaula Lumpur recorded a maximum sound of 108.2 dBA and the noise emitted by vehicles were upto 133 dBA [7].

In the present study, major noise related health effect according to the respondents was lack of concentration. Even low-level noise can be a stressor. It elevates psycho physiological factors and triggers more symptoms of anxiety and nervousness. Traffic noise exposure even at low levels, was associated with annoyance and sleep disturbance. Study among Kolkata traffic policemen found that the main causes of stress were inadequate rest, no leave, abstaining from social occasions and excessive pressure [4].

Previous studies have shown that environmental noise could give rise to psychological and psychosomatic symptoms in the form of headaches, fatigue irritability and annoyance [4,8] which is also present in our study.

Sleep Disturbance is a major effect of environment noise. Exposure to noise can induce disturbance of sleep in terms of difficulty to fall asleep, alternation of sleep pattern of depth and awakenings [9]. Study done among West Bengal Police officers revealed that 42 and 12% were suffering from moderate to high psychological stress respectively [10]. There was a significant positive correlation (r=0.578, p=0.000) between noise levels and stress in the present study which shows that the higher the noise levels, more is the stress in traffic policemen. A positive exposure-response relation was indicated for annoyance and sleep problems with noise levels [11].

Noise pollution is emerging as an environmental problem. This can cause negative impact on public health and welfare. Considering the above aspects, we can conclude that traffic noise dominates the spectrum of environmental noise.

On the basis of the findings of the present study, the following points can be recommended to traffic policemen manning traffic: use of ear protectors (ear plugs/muffs), periodic checkups (audiometric testing), duty scheduling for exposure limitation etc and awareness should be created among traffic policemen about the auditory as well as non-auditory effects of noise by implementing education and training programmes.

The authors are thankful to Institute of Aerospace Medicine, Bengaluru and Dr. S.S Mishra, Professor in Physiology for providing sound level meter, Mr. Praveen Sood, IPS, Additional Police Commissioner, Traffic, Bengaluru for permission to carry out the study and Mr. B. Venkatappa, Assistant Administrative Officer, West division, Police department, Bengaluru for his support and all the traffic staff who has volunteered for the study.