Studies on Oxidative stress in Preeclampsia

Preeclampsia is a progressive, unpredictable and potentially dangerous human pregnancy specific disorder characterised by the onset of hypertension (>140/90 mmHg) and proteinuria after 20 weeks of gestation in previously normotensive, non-proteinuric women. It is one of the most commonly occurring complications of pregnancy, leading to fetal growth retardation, preterm delivery and maternal and fetal morbidity and mortality [1,2]. The aetiology and pathogenesis of preeclampsia remain poorly understood. Increasing evidence indicates that dysfunction of the vascular endothelium accounts for the altered vascular reactivity, activation of the coagulation cascade and loss of vascular integrity that accompanies pree-clampsia [3,4,5].

Recent reports suggest that free radical induced endothelial cell injury might be an etiologic factor [6]. An imbalance of increased oxidant status and decreased antioxidant status in women with preeclampsia has also been noted. Low levels of antioxidants such as the catalase, vitamins A, and E, and glutathione are seen in women with pree-clampsia [7]. Lipid peroxidation seems to play a role in the pathogenesis of preeclampsia, but, the results are conflicting. Few studies do not support the role of oxidative stress in the genesis of preeclampsia [8]. In addition, the role of oxidative stress in the progression of preeclampsia and its associated complications has not been well addressed. Ceruloplasmin is a free radical scavenger as well as a late acute phase reactant protein. It has been shown to be an important antioxidant implicated in the modulation of oxidative stress responses in patho-physiological states such as diabetes mellitus [9]. However, its role in pree-clampsia has not been explained.

A Cross Sectional Study was carried out on 30 normoten-sive non-pregnant women and 30 normotensive pregnant women as controls and 30 patients of preeclampsia as cases, attending the outpatient department and wards of Obstetrics and Gynaecology, Kempegowda Institute of Medical Sciences, Bangalore during the year 2003-2004. The diagnosis of preeclampsia was established (blood pressure > 140/90mmHg, proteinuria and edema) in accordance with the definitions of the report of the Working group members of National High Blood Pressure Education program (NHBPEP) [10]. The inclusion criteria for the subjects were age between 18 to 35 years and gestational age between 28 to 40 weeks, singleton pregnancy and absence of any other medical complication concurrent with preeclampsia for the pregnant women. Patients and controls were matched for gestational age, maternal age and parity. Elderly primigravid subjects, gestational diabetics, chronic hypertensives, multiple gestations and those with a family history of preeclampsia were excluded from the study. Subjects included were also non-smokers, non-alcoholics, and not suffering from any acute infections or chronic illnesses. A history of cardiovascular disease, renal disease or any underlying medical disorders (determined by a comprehensive physical examination and routine laboratory tests) or concurrent intake of any drug were the exclusion criteria in the study. The Institutional Ethical Committee approved the study protocol.

History and personal physical data was obtained from both cases and controls. After informed written consent, 5ml of venous blood was collected from the subjects. The serum was separated and analysed for malonaldehyde (MDA), ceruloplasmin, glucose, urea, creatinine and uric acid. A random urine sample was collected for urine protein (expressed as protein to creatinine ratio), urine glucose detection and urine creatinine tests. Fifteen women were randomly chosen from among the preeclamptic group. Post partum blood and urine samples were collected from these patients within 5days after delivery; these samples were analyzed for the same parameters as the antenatal samples.

Lipid peroxidation was measured by estimating malonal-dehyde (MDA). MDA, a product of lipid peroxidation, reacts with thiobarbituric acid (TBA) to form a pink colored TBA-MDA adduct. This color is measured at 532nm [11]. Ceruloplasmin was quantitated by its oxidase activity. It was measured by its property to catalyze the oxidation of colorless para-phenylene-di-amine to blue or violet colored compounds [12]. Urinary protein excretion was determined by turbidimetric method using sulphosalicylic acid to precipitate the protein [13]. The estimation of serum glucose, serum creatinine, urine creatinine, serum urea and serum uric acid were carried out on Technicon RA-XT autoanalyser using diagnostic reagent kits obtained from Bayer Diagnostics India Ltd.

The analysis of variance (ANOVA) was carried out to find the significance of mean values between the three groups. Once significance was noticed, the post hoc test of Tukey and the Chi-square test [14] were used. 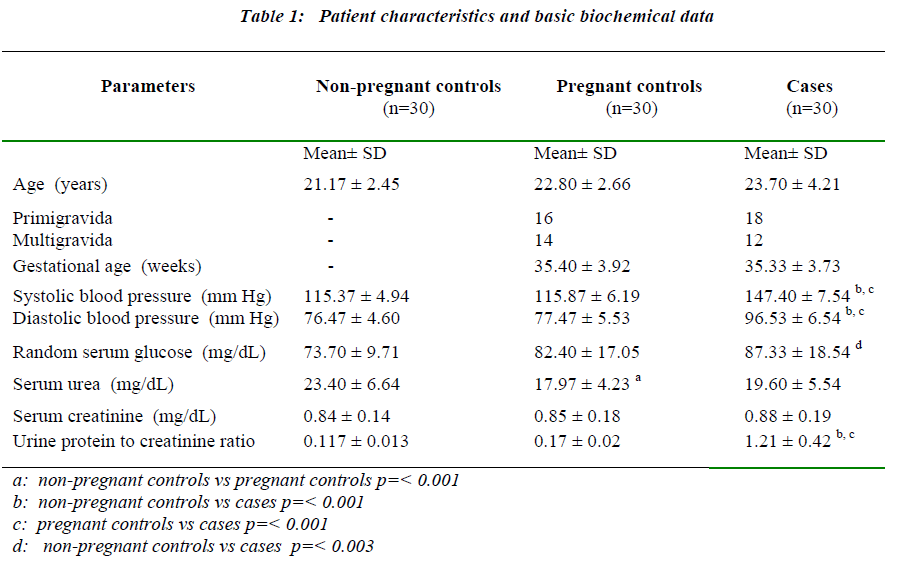 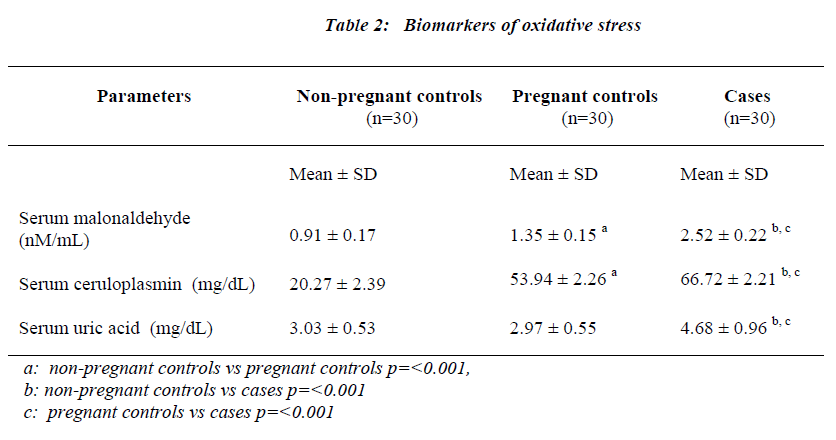 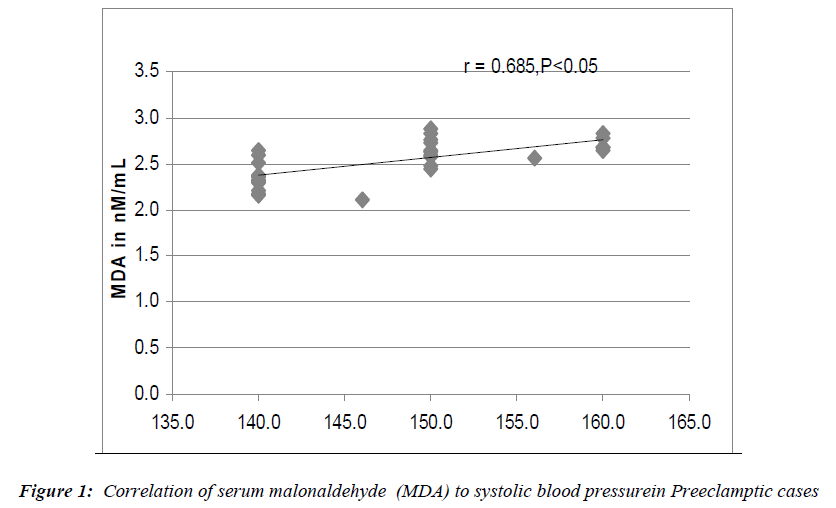 Table 3: Comparison of biochemical data of antepartum and postpartum samples of preeclamptic cases

Markers of oxidative stress during the postpartum period 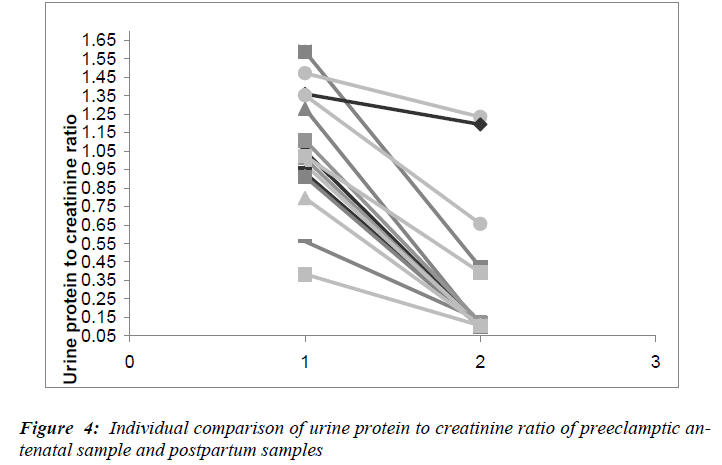 Oxidative stress has been proposed as one of the underlying mechanisms contributing to the pathophysiology of preeclampsia. Most studies on oxidative stress in pree-clampsia have reported increased levels of MDA (malon-aldehyde) in serum from preeclamptic women compared to pregnant women [15,16]. In the present study, lipid peroxidation is significantly increased in preeclampsia when compared to pregnant controls. This is similar to the results of previous studies [15,16].

Oxidative stress as a cause of hypertension: Hypertension is associated with an elevation of reactive oxygen species (ROS) and frequently also with an impairment of endogenous antioxidant mechanisms. Experimental manipulation of the redox state in vivo shows that reactive oxygen species (ROS) can be a cause of hypertension [17]. Exposure of cells or tissues to exogenous oxidants mimics events that contribute to the development of hypertension. Generators of superoxide abolish endothe-lium-dependent relaxation of aortic rings from spontaneously hypertensive rats (SHR), induce contraction of mesenteric beds, and increase chloride reabsorption by isolated thick ascending limbs of the loop of Henle [18,19]. In whole rats, infusion of H2O2 in the renal medulla increases blood pressure (BP) and decreases blood and urine flows, as well as sodium excretion [20]. In both animal models and humans, increased blood pressure has been associated with oxidative stress in the vasculature. This excessive endothelial production of reactive oxygen species (ROS) may be both a cause and an effect of hypertension. Apart from NADPH oxidase, nitric oxide synthase, lipoxygenases, cyclo-oxygenases, xanthine oxidase and cytochrome P450 enzymes, mitochondria also could be considered a major source of reactive oxygen species (ROS): in situations of metabolic perturbation, increased mitochondrial ROS generation might trigger endothelial dysfunction, possibly contributing to the development of hypertension. However, the use of antioxidants in the clinical setting induced only limited effects on human hypertension or cardiovascular endpoints [21]. Antihyper-tensive treatment aims to reduce not only blood pressure values but also hypertension-induced organ damage and as a consequence morbidity and mortality. Reports have demonstrated that lowering blood pressure leads to reduction of oxidative stress [22,23]. In a study conducted by Saez et al. [24], antihypertensive treatment for three months significantly reduced oxidized/reduced glu-tathione ratio and malonaldehyde, significantly increased the activity of superoxide dismutase and catalase. The changes were independent of the kind of antihypertensive treatment (non-pharmacologic, β blockers or angiotensin receptor blockers) and the beneficial effect of treatment increased over time [24]. However, in a study conducted recently, antioxidant supplementation (vitamin C and vitamin E) in a group of preeclamptic women did not result in a reduction in blood pressure [25]. In the present study, the elevated blood pressure returned to normal levels after delivery, but lipid peroxidation was still higher than normal levels. This suggests that factors other than oxidative stress may contribute to the development of hypertension in preeclampsia.

Oxidative stress and progression of renal injury: Pree-clampsia and eclampsia are associated with impaired re-nal function, reduced renal perfusion and glomerular filtration [26]. This may be attributed to intrinsic renal changes caused by severe vasospasm. There is considerable evidence suggesting that reactive oxygen species (ROS) are implicated in the pathogenesis of ischemic, toxic and immunologically mediated renal injury [26]. In experimental immune glomerulonephritis, reactive oxygen species (ROS) are generated by polymorphonuclear leucocytes, monocytes and glomerular mesangial cells. Their formation results in morphologic lesions and in modification of glomerular permeability to proteins through activation of proteases and reduction of pro-teoglycan synthesis [27]. In the present study, both lipid peroxidation and protein excretion remained elevated after delivery in preeclamptic women compared to pregnant antenatal cases. Recently, administration of antioxidants to preeclamptic women resulted in the decrease in magnitude of proteinuria [28]. These findings favor the role for oxidative stress in the causation of target tissue damage such as renal injury.

Ceruloplasmin and oxidative stress and inflammatory response: Ceruloplasmin is a major contributor to the antioxidant defense system of human serum. Ceruloplas-min acts as an antioxidant by several mechanisms like inhibiting iron-dependent lipid peroxidation and hydroxyl radical (HO•) formation from hydrogen peroxide (H2O2) via its ferroxidase activity, reacting with and scavenging H2O2 and superoxide anion and by inhibiting copper-induced lipid peroxidation by binding copper ions [29]. Ceruloplasmin can also function as a pro-oxidant and can oxidatively modify low density lipoproteins (LDL) in vitro [30].

I am extremely grateful to Dr. Vasudha KC, Professor & Head, Department of Biochemistry, M.S.Ramaiah Medical College, Bangalore, for her constant support and encouragement. I am also thankful for the statistical analysis done by Dr. K.P.Suresh, Scientist (Biostatistics), NIANP (ICAR), Bangalore.