Hypoxia is the commonest cause of physical disability and death due to brain damage in neonates during before and after birth [1]. Brain is a visceral organ and decreased in the blood flow results in neuronal damage, inflammation and cerebral ischemia. Literature suggested that 60% of premature babies are suffering from cerebral ischemia associated with mental abnormalities [2]. Hypoxia produces stress on the foetus during the early developmental stage and thereby increases in oxidative stress and inflammation of neurons which leads to neuronal damage [3,4]. Histone Deacetylase (HDAC) is the enzymes which control the expression of gene and functions of different proteins. HDAC inhibitor decreases the expressions of inflammatory mediators like p53, cytokinins and NFκB [5]. Moreover previous study reported the neuroprotective effect of HDAC inhibitors and justifies the role of HDAC inhibitors as a neuroprotactant on the brain of neonatal rats. Literature also reveals that HDAC inhibitor possesses neuroprotective effect as it improves the number of axons and increases of olegodendrocytes [6]. In the recent year so many naturally derived products were investigated for their neuroprotective activity against the cerebral ischemia induced injury [7,8]. Stachydrine is an alkaloid isolated from Leonurus cardiaca L. (Lamiaceae). Previous studies reported that stachydrine possesses a strong anticancer activity, hypoglycemic and in cardiovascular diseases [9,10]. Reports also suggested protective effect of stachydrine on endothelial and it also ceases the synthesis of inflammatory mediators [11]. A fluorimetric assay identified the HDAC inhibitors from an herbal extract Leonurus cardiaca L. by enzymatic assay [12]. On the basis of this the present study investigates the neuroprotective effect of stachydrine by inhibiting HDAC in neonatal rats.

Sprague-Dawley rats pregnant were procured from the Laboratory Animal Department of China Medical University and laboratory was kept under controlled condition as per the guidelines (cycle of 12 h light/day, pathogen free). All the protocol of the given study was approved by institutional ethical committee (V. No: 109/2014). Stachydrine was procured from sigma Aldrich (USA).

Pups (P7) were properly anesthetized by injection of Phenobarbital and permanent ligation was done by exposing the carotid artery. Thereafter all the neonatal rats were placed in the dam and recovered pups was exposed to a hypoxia condition by placing it in an incubator (37°C, 8% O2 and 92% nitrogen) for the period of one hour. The highest tolerance period of hypoxia was estimated by the preliminary study. Temperature of the chamber was kept constant at 37°C and moderately submerged into water. Pups were kept 5 min for recovery after one hour of hypoxia. All the pups were divided in to four groups as follows: Control (normal rats), Negative control (Saline treated cerebral ischemic rats, n=6), stachydrine treated cerebral ischemic rats (5 and 10 mg/kg, ip, n=6). As per the protocol all the groups were given treatment for the period of five days [13]. At 12 h later the treatment protocol (P12) body weight and temperature were estimated and brain of all the anesthetized (phenobarbitone) pups was isolated by intracardial perfusion with saline. The isolated brain separated in to two hemicerebrum and one of them was stored into frozen liquid nitrogen at -70°C for the estimation of protein. Other side of the isolated hemicerebrum was applied to TUNEL staining [14].

Infracted volume was estimated by using 2, 3, 5-Triphenyl Tetrazolium Chloride (TTC) in saline solution for the period of 15 min. Analysis of Images of brain sections was achieved by using computerized image analyzer. Infracted area of slices of the brain of same hemisphere added together to get total infract volume [15].

Brain section were embedded in paraffin and the section was deparaffinized by dipping it into xylene (5 min) and 70, 95, 100% ethanol for hydration. Then tissue was incubated for 5 min with proteinase k (20 g/ml), situ apoptosis estimation kit (Roche Applied Science, Germany) used for the TUNEL method. The tissue sections were cleaned with buffer and thereafter incubated for 30 min. Tissue sections were again stained by mounting it into hematoxylin and then rinse it with water. After dehydration in graded ethanol series and transparent in xylene, the brain sections were mounted onto gelatin-coated slides. The ratio of apoptotic neurons to the total number of neurons was considered as % of apoptotic neurons. The estimation of apoptotic neurons were achieved by histopathological analysis [16].

Frozen hemicerebrum of all the pups were homgenated with ice cold buffer. The composition of buffer is 2 mM EDTA and protease inhibitor (1%) mixed in Tris Buffer (TBS). the fraction of nuclear protein was extracted out by centrifuging it at 800 x for the period of 10 min and cytosolic protein by centrifuging at 9200 x for the period of 15 min. the supernatant was used for the estimation of protein.

Colorimetric detection was used for the estimation of HDAC activity by using kit (Upstate, CA). The absorbance at 405 nm was observed and the HDAC activity was expressed in terms of the % of control group. Effect of stachydrine on expression of acetylated H3 and H4 was estimated by using western blot analysis [17].

The supernatant of tissue homogenate was used for the estimation of cytokinins by specific Enzyme-Linked Immunosorbent Assay (ELISA) kits [18] and the activity of Superoxide Dismutase (SOD) and Glutathione Peroxidase (GSH-Px) in the brain tissues of all the pups estimated by spectrophotometer (Shimadzu, Japan) [17].

Effect of stachydrine on infract volume 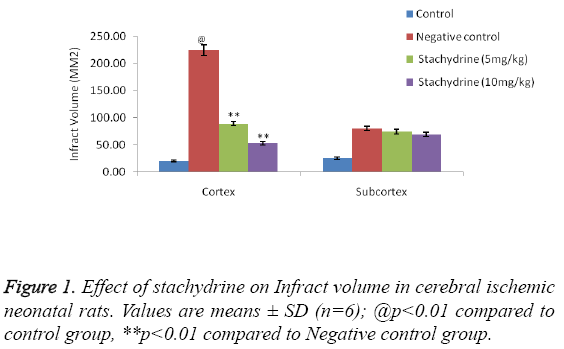 Effect of stachydrine on apoptosis in cerebral ischemic neonatal rats 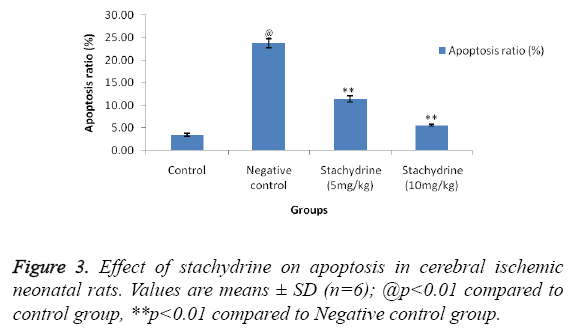 Effect of stachydrine on HDAC activity 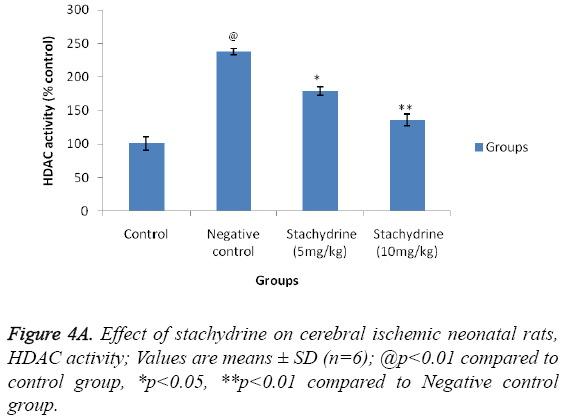 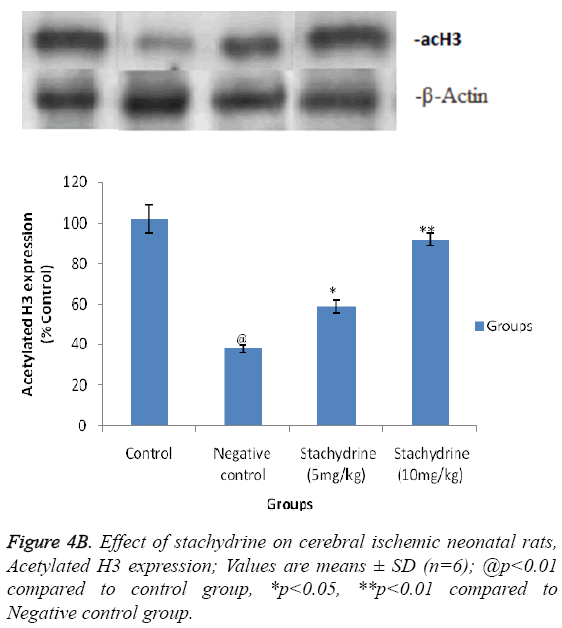 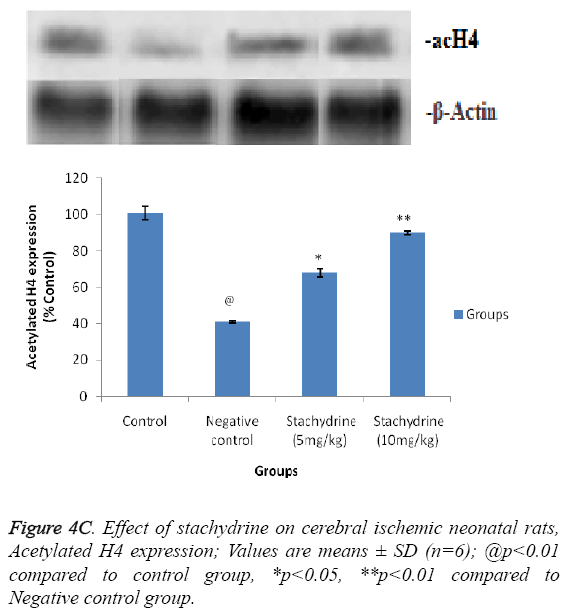 Estimation of cytokines in the brain tissues

Estimation of oxidative stress in the brain tissues

Markers of oxidative stress parameters such as SOD and GSH in the brain tissues of hypoxia induced cerebral injured neonatal rats were found to be decreased compared to control group of rats. It was observed that treatment with the stachydrine significantly increases (p<0.01) in the SOD and GSH-PX level in the brain tissues and thereby it decreases the oxidative stress in cerebral ischemic neonatal rats as shown in Table 1.

Table 1: Effect of Stachydrine on parameters of oxidative stress in the brain tissues of cerebral ischemic neonatal rats.