This case would be useful in a class to discuss the importance of recurrent pancreatitis in pediatrics and outlines the need for further work up for this condition. Additionally, this case illustrates the use of endovascular techniques to repair vascular complications of pancreatitis.

The primary subject matter of this case concerns pediatric gastroenterology. Secondary issues examined include vascular complications of pancreatitis and recurrent pancreatitis. The case has a difficulty level appropriate for second year graduate students. The case is designed to be taught in one to two class hours and is expected to require one to two hours of outside preparation by students.

The incidence of pancreatitis in children has been increasing over the past two decades [1]. The diagnosis of acute pancreatitis requires two of the following three criteria: abdominal pain that suggests, or is compatible with acute pancreatitis, serum lipase or amylase that is at least three times greater than the upper limit of normal, and imaging findings characteristic of, or compatible with acute pancreatitis [2]. Acute pancreatitis in children is typically caused by trauma, systemic illness, biliary disease, or medications, such as valproate or azathioprine. Medications, in general, have been estimated to account for 0.3 to less than 2 percent of all cases of acute pancreatitis with higher incidences in pediatric patients, although this etiology is believed to be underreported [3]. Fortunately, most cases are self-limiting and have a benign course. Additionally, in recurrent pancreatitis it is important to consider anatomic, environmental, metabolic, autoimmune, and genetic factors [4]. Splenic artery pseudoaneurysm (SAP) is a rare complication of pancreatitis, and is more often reported in children following blunt abdominal trauma [5]. To our knowledge, there have been six reports of pediatric SAP unrelated to trauma [6-11], one of which was related to medication9. We present a case of a pediatric patient with SAP following acute pancreatitis in a patient taking valproate.

Two months prior he had symptomatic acute pancreatitis presenting with intermittent abdominal pain which was worse after eating. Amylase was 219 U/L and lipase was 257 U/L. At that time, abdominal ultrasound was normal with a poorly visualized pancreas. Outpatient management included low fat diet. Lipase normalized within 10 days. 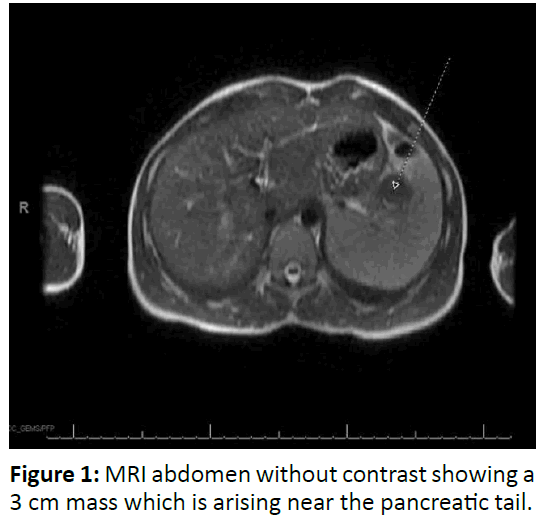 Figure 1: MRI abdomen without contrast showing a 3 cm mass which is arising near the pancreatic tail. 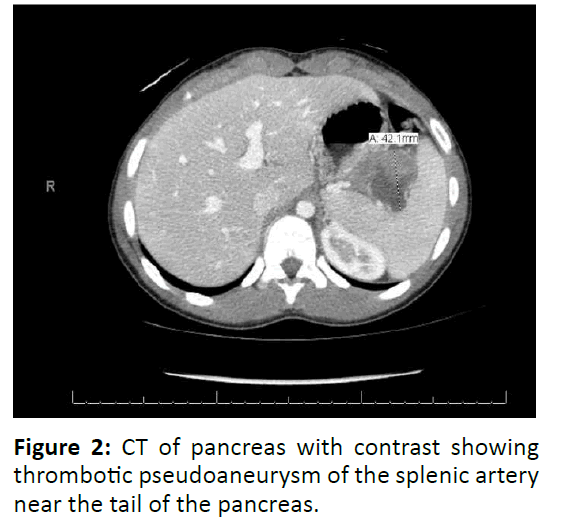 Figure 2: CT of pancreas with contrast showing thrombotic pseudoaneurysm of the splenic artery near the tail of the pancreas.

The incidence of acute pancreatitis is a rising entity among children [12]. The Food and Drug Administration reports pancreatitis as a black box warning for valproate. Most cases of valproate associated pancreatitis present within the first year of therapy; however it can develop at any time [13]. This patient was diagnosed with two episodes of acute pancreatitis based on the clinical definition from the INSPPIRE group2 after two years of valproate therapy. Additionally, he met the criteria for acute recurrent pancreatitis given that he had a documented normal lipase with complete resolution of abdominal pain before the subsequent episode of acute pancreatitis [2]. He also had a SAP, which is very rare in the pediatric population. SAPs can be complications of pancreatitis and are believed to form when the splenic artery wall integrity is compromised following exposure to pancreatic enzymes leading to vascular erosion. This leads to a weak vessel wall and formation of a pseudoaneurysm (PA) as blood leaks out and is contained by surrounding fibrotic tissues. Additionally, PA’s are commonly associated with pseudocysts [6,7,14].

This patient was on valproate which can be considered high risk therapy given the FDA black box warning. However, valproate was deemed the best medication to control his seizures, which is why it was continued after the first episode of acute pancreatitis. For this patient, valproate was a set up for his pancreatitis which ultimately led to his SAP. The patient’s imaging studies did not reveal any congenital or structural abnormalities making this etiology unlikely. Additionally, he had an unremarkable infectious and hereditary work up which further supports valproate as a cause of the pancreatitis leading to the SAP

PA’s most commonly involve the splenic artery due to it’s course along the pancreas [6,8,11]. However, any vasculature along the pancreas can be affected, as illustrated by cases involving the gastroduodenal artery [7] and the superior mesenteric artery6. PA’s take time to develop, usually don’t occur immediately after an episode of pancreatitis, and can develop between weeks to years after an episode of pancreatitis [7,13].

Accurate and timely diagnosis of SAP is vital because of the potentially lethal hemorrhage that could occur if the PA spontaneously ruptures [6,8,13]. Catheter angiography is considered the gold standard of diagnosis and allows visualization of smaller pseudoaneurysms that can be missed with CT and given the significant morbidity of even small pseudoaneurysms, direct angiography might still need to be considered if suspicion is high as it allows the added benefit of embolization at time of diagnosis [7,8]. However, advancements in technology allow multidetector computed tomography (MDCT) to be a sensitive modality that allows less invasive but comparable assessment6. Additionally, MDCT with angiography can be useful for pre-surgical planning [6]. Ultrasonography is a less reliable diagnostic modality as it is operator dependent and may be limited due to bowel gas or obesity8. If these lesions are large, duplex Doppler ultrasound may be able to identify turbulent arterial flow within an anechoic mass [11,15].

Treatment should be initiated immediately given this potential for spontaneous rupture and high mortality [8,13]. With improved technology and endovascular techniques, surgery is no longer firstline therapy. Transcatheter embolization has become the more common therapeutic procedure, offering reduced morbidity and mortality as compared to direct surgical intervention8. Most commonly, only the feeding vessel is embolized to achieve thrombosis of the PA [13,14]. Potential complications from this technique include splenic infarction, migration of coil, intestinal necrosis and vascular dissection [13,14]. Close follow up is necessary to monitor for re-bleeding in which splenectomy would be the definitive therapy [14].

It is important that patients with a second episode of pancreatitis be considered for additional work up for underlying pathology, including additional laboratory studies and imaging. This case further supports transcatheter embolization as a minimally invasive and safe treatment in hemodynamically stable children with SAP. It also demonstrates the importance of maintaining suspicion for a PA in children that present with abdominal pain with a history of pancreatitis and the utility of imaging these children.

–– What is the most common artery involved in pseudoaneurysms associated with pancreatitis usually involved and why? Answer: splenic artery due to its adjacent position and course to the pancreas.

–– What are the most common presenting symptoms of a patient with a splenic artery pseudoaneurysm? Answer: abdominal pain, hematochezia/melena, hemosuccus pancreaticus, and hematemesis.