Plasmodium falciparum (P. falciparum) malaria is an increasingly recognized cause of malaria in Mandya, a rural pocket of the southern part of India. There is a paucity of detailed clinical studies of naturally acquired infections like malaria from these places. 345 subjects were recruited for the study. Smears positive for falciparum malaria were considered diagnostic. Detailed history, physical examination and required investigations were done in all cases. Three major treatment categories were designated as those who received chloroquine with primaquine, artesunate with mefloquine and quinine with doxycycline. Majority subjects were in the age group of 26 – 35 years, 32% subjects used personal protective measures like mosquito nets. 56% of the subjects belong to the middle socio-economic status. Most subjects sought medical care within 1 to 5 days of onset of symptoms. Fever was the commonest symptom followed by headache, nausea with vomiting, myalgia, cough, altered sensorium, abdominal pain, jaundice. The triad of malaria, fever, pallor and splenomegaly were noted in the study group. Subsets uncomplicated cases (282) of P. falciparum malaria patients responded to chloroquine treatment (12.8%), quinine treatment (10.6%) and to artesunate treatment (76.6%). Some uncomplicated P. falciparum malaria patients (62) received artesunate as second line of treatment and responded well. Those with complicated malaria (125) were treated with artesunate (60) and quinine (65). 4% mortality was observed in this study, i.e. 14 among the complicated P. falciparum malaria group.

Malignant tertian malaria is an Anopheles mosquito transmitted tropical disease caused by Plasmodium falciparum (P falciparum). The clinical features range from no or mild symptoms to severe disease and death as observed in many parts of the world [1]. The global burden of malaria is largely carried by the endemic regions with as many as 500 million cases annually and a death toll of one million each year [2]. Human migration and increased travel to endemic areas have led to many cases of imported malaria in countries where it had been priorly eradicated, making it a global health problem [3]. Anually, about 10,000 - 30,000 travellers to endemic areas fall ill with malaria after returning home [4].

In India about 50% of the infections reported are due to P vivax, a little more than 40% due to P falciparum and lesser incidences of mixed infection [7]. P malariae infections are <1% and are reported from Tumkur and Hassan districts of Karnataka [8]. The present study was conducted in Mandya, a rural district of Karnataka, India. This place gets a modest rain fall and has a tropical temperature. This region is considered as an endemic area for malaria due to its water bodies - ponds, lakes and canal irrigation, adding to the morbidity and mortality due to P falciparum malaria. This study aims to understand the symptomatic presentation, clinical course, complications and their response to treatment in patients with P Falciparum malaria infection.

A prospective study design was adapted and the study was conducted in the department of General Medicine, Adichunchanagiri Institute of Medical Sciences, Nagamangala, Mandya over a period of 10 years. (April 2001 – December 2010). The study included 345 subjects who were smear positive for P falciparum malaria. The subjects were recruited from those attending the outpatient department and those admitted in the department of General Medicine. All subjects in the study gave a written consent for their participation. The study was approved by the institutional ethics committee.

Study subjects gave a detailed history including the duration and intensity of fever, any associated chills / rigors. Also symptoms like headache, myalgia, cough, breathlessness, nausea, bleeding tendencies, dark colored / decreased urine output and altered sensorium / convulsions were enquired. Past history of malarial infection, blood transfusion and treatments received were taken in detail. History of similar illness among the family members or in the neighborhood and information about use of protective measures against mosquitoes were enquired.

On presentation with fever and chills, the subjects’ blood was examined for malarial parasite. Samples were centrifuged at high speed in micro capillary PCV tube at 6000 rpm for 5 -10 minutes. The buffy coat formed was used to make a thin smear, stained with Leishman’s stain and observed under oil immersion [9,10]. Smears were repeated every 8 to 12 hrs for the next 48 hours in suspected cases when the first smear did not reveal parasite. Also smears were repeated on completion of treatment and on the 7th day to see the response to treatment.

All uncomplicated cases of P falciparum malaria who visited outpatient department were treated with oral medications and complicated cases (those which had complications at presentation and those earlier treated in outpatient but not responding to orals / intolerance to medications) were admitted and treated as depicted in the Flow chart 1. Choice of treatment regimens of Chloroquine group (Chloroquine and primaquine), Quinine group (quinine and doxycycline) and Artesunate group (artesunate and mefloquine) were based on the socio-economic status, tolerability and clinical presentation (duration, presence of co-mobidities, complications, treatment regimens [11,12,13].

Oral chloroquine (1500 mg) was given as 600 mg stat, 300 mg after 6 hrs and 300 mg daily for next 2 to 7 days; along with above treatment patients received a single dose of primaquine 45 mg. Intravenous infusion of chloroquine was given in intolerant subjects at a dose of 10 mg/kg (max 600 mg) body weight with isotonic saline over 8 hours followed by 15 mg/kg (max 900 mg) body weight over 24 hours.

Oral quinine was given at 600 mg three times daily for 7 days. Intravenous quinine was given 20 mg/kg body weight as bolus with 5% dextrose infusion over 4 hrs and then followed by maintenance dose of quinine 10 mg/kg body weight with 5% dextrose over 2-4 hrs every 8th hourly. When the patient was able to take orally, it was changed to oral quinine 600 mg at 8th hourly. The total duration of the quinine treatment was 7 days. In addition oral doxycycline 100 mg twice daily for 7 days was given.

Other ancillary treatments given were antipyretics (acetaminophen), intravenous 25% dextrose, intravenous fluids and blood transfusion. The cases were fol lowed subsequently after discharge in the outpatient department.

During the study period, 3230 peripheral blood smear samples from suspected subjects’ with malaria was examined. Amongst these 876 were positive for malaria. 397 of the malaria positives were due to P. falciparum. The slide positive rate (SPR) is 27.12 % and slide falciparum rate (SFR) 12.29 %. 345 cases (of 397) that were confirmed parasitologically and came for regular follow-up were taken for the study. Subjects’ details and baseline characteristics like age, co-morbidities, symptom characteristics and duration of hospital stay are as shown in table 1. 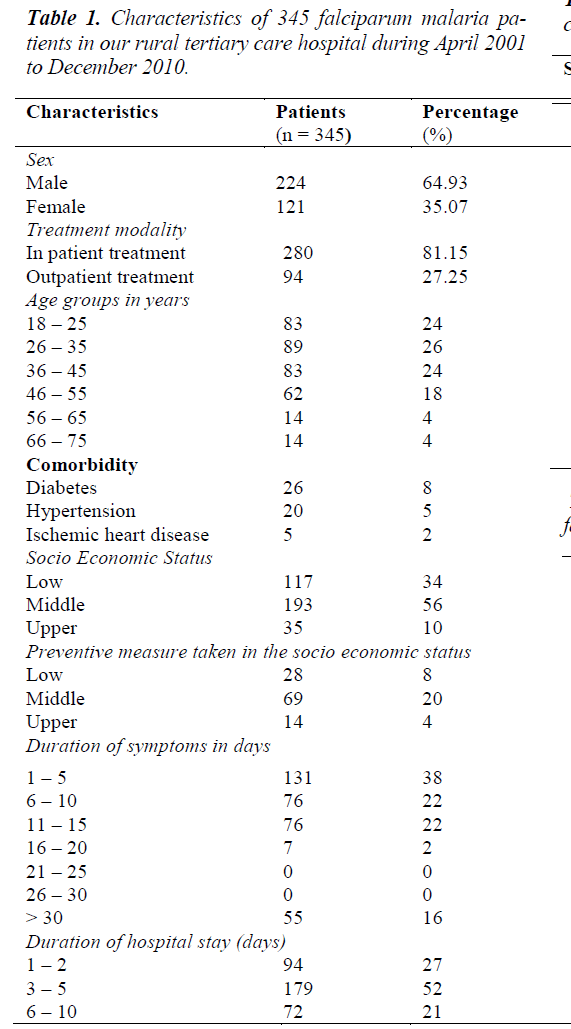 Table 1: Characteristics of 345 falciparum malaria patients in our rural tertiary care hospital during April 2001 to December 2010.

The numbers of positive P. falciparum malaria cases gradually increased from April, peaking in June - July and gradually declined in August - September. The commonest symptom was fever (all cases) followed by nausea with vomiting, headache followed by others as illustrated in the table 2. Fever, pallor and splenomegaly were the predominant signs amongst the others as shown in the table 3. Leucocyte and Platelet count was normal in a fairly large number of patients. Smaller subsets had abnormal counts. 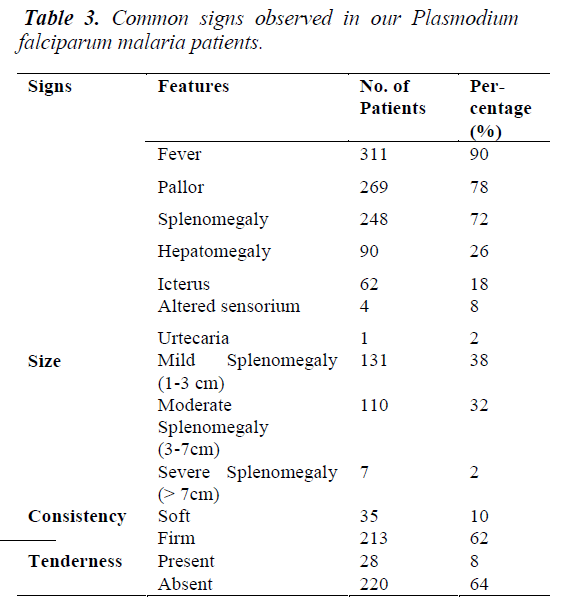 The commonest complications [14] observed was jaundice followed by cerebral malaria, renal impairment, hypoglycaemia, hepatorenal syndrome and haematological (DIC, pancytopenia) as summarized in table 4. Many patients had more than one complication.

Table 4: Complications of plasmodium falciparum malaria observed in our study.

Treatment and response of patients with Chloroquine group (Chloroquine and primaquine), Quinine group (quinine and doxycycline) and Artesunate group (artesunate and mefloquine) as shown in table 5 and table 6.

Since 1995 onwards there is significantly increasing incidence of malaria in Mandya District as per reports from District health office (DHO). Also there is an increase in the number of falciparum malaria cases. In the present study 3230 suspected cases of malaria were examined by peripheral blood smear, 876 were confirmed and 397 were falciparum malaria.

Falciparum malaria was profound in males than female similar to the findings of other studies [15,16]. The reasons put forward for this difference is higher exposure of adult males to risk of malaria, because of the outdoor activities of the males and females are better clothed than males.

Maximum study subjects were in the third and fourth decade (age group of 26 - 35 years) followed by other age groups. This is consistent with the observation that malaria incidence is higher in young adults because of their outdoor activities and mobility [17].

Monsoon and post monsoon period (July to November) showed maximum malaria incidence in previous studies. In the present study, malaria gradually increased from April peaking in June - July and showed gradually declined in August - September, the reason put forward for the above high incidence is due to increased mosquito breeding.

More than half of the patients sought medical help immediately or within 10 days of symptoms. Considerable numbers (about 16%) sought medical treatment after more than 30 days with symptoms on arrival at this study center. This observation can be attributed to the simple reason that this hospital is referral centre (Tertiary Care Centre).

All patients presented fever (intermittent / continuous). This observation is consistent with other studies which suggest that fever with chills and rigor is the commonest mode of presentation [15]. Headache was the second commonest symptom similar to the study previously reported [18].

Altered sensorium and Convulsions was present in 8% and 2% of cerebral malaria patients respectively and was comparable with the earlier study [15,16].

Bleeding was present as melena in a small number (2%) of P. falciparum malaria. Jaundice associated with vomiting was a significant symptom in many (16%) patients with fever of 10 days as reported in earlier studies [15,18].

Total leucocyte count was in normal limits in majority of the patients with fewer cases of leucocytosis in those with anti malarial treatment without antibiotics. Leucopenia was present in very few and those with cerebral malaria as shown in the table 9.

Out come and mortality 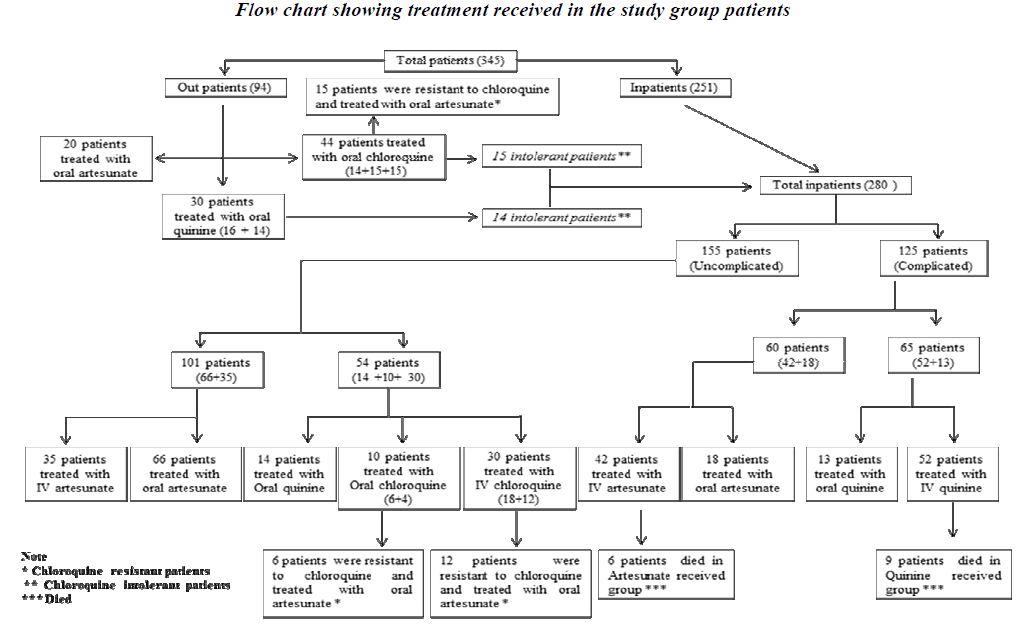