Severe lower gastrointestinal bleeding due to metastatic choriocarcinoma to the jejunum: A rare presentation.

We report a 33-year-old woman with intermittent abdominal pain and lower gastrointestinal bleeding. Upper and lower GI endoscopy did not reveal any lesion. In order to further evaluation, radionuclide RBC scan was performed and suggested the location of bleeding in right upper quadrant of abdomen around the small intestine, then laparotomy was performed and a 1 cm × 2 cm tumor was seen in jejunum approximately at 65 cm from treitz ligament. Pathologic examination was compatible with metastatic choriocarcinoma to the jejunum. The serum β-hCG was 57,000 IU/ml. On uterus evaluation, tumoral mass compatible with choriocarcinoma was detected. Chemotherapy was started after surgery. The patient was asymptomatic on follow-up.

Choriocarcinoma and placental tumors are rare and affected patients usually present with metastasis-related symptoms [1-3]. The most common sites of metastasis are lung and then vagina and pelvis [4]. These tumors in gastrointestinal system usually present with gastrointestinal bleeding (GIB), also they can be manifested as a mass or rupture of viscous [3-5]. Early diagnosis is the only chance of patients treatment. This tumor usually responds to surgery and combined chemotherapy effectively [6]. We report a rare case of metastatic choriocarcinoma to the jejunum.

The patient was a 33-year-old woman with intermittent crampy periumbilical abdominal pain and severe rectal bleeding since 2 weeks prior to admission.

She had no history of any diseases except menorrhagia since 3 months ago. She also denied molar pregnancy, abortion, and ectopic pregnancy. Her last pregnancy was 5 years ago.

Upper and lower GI endoscopy showed no lesion. Small bowel barium study was normal. Radionuclide RBC scan was performed and suggested the location of bleeding in right upper quadrant of abdomen around the small intestine (Figure 1). 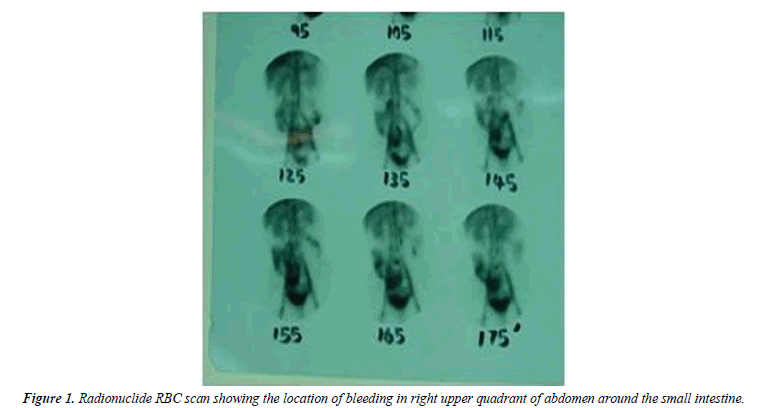 Figure 1: Radionuclide RBC scan showing the location of bleeding in right upper quadrant of abdomen around the small intestine.

She received six units of packed red blood cells before surgery; after that she underwent surgery. Laparotomy was performed and a 1 cm × 2 cm tumoral lesion was seen in the jejunum and it was excised successfully.

On ultrasonography, uterus size was 85 × 52 × 39 mm, a hypoechoic 14 mm lesion was seen in endocervix region. Hysteroscopy was performed and showed the same mass with 7 × 14 mm size at endocervix that its pathological examination was compatible with choriocarcinoma. Chemotherapy was started after surgery. Subsequently, the serum β-hCG level returned to normal and her abdominal pain and rectal bleeding were relieved.

Placental or trophoblastic tumors are rare tumors with a good response to treatment even in advanced or metastatic stages [1]. Nevertheless, prognosis is worse for those patients presenting with small bowel metastases [2].

Affected patients usually present with matastasis-related symptoms [3-5]. The most common sites of metastasis are lung (80%), vagina (30%), pelvic (20%) and liver and brain (10%). In fact, patients with advanced pulmonary involvement may have minimal manifestations or be asymptomatic [2-5]. If the physical examination of pelvic and genitalia are normal, simultaneous metastatic disease will be rare [1,6].

Choriocarcinomas of the small intestine, including both primary and metastatic tumors, are rarely encountered. Gastrointestinal metastasis is very rare and only five percent of patients presenting with choriocarcinoma develop small bowel metastasis [3]. They are seen most commonly in the jejunum, followed by the duodenum and the ileum, respectively [4,7,8]. Metastatic lesions of small intestine are often multiple and ulcerating [7].

Choriocarcinoma most commonly occurs in females following molar pregnancy, spontaneous abortion, or ectopic pregnancy. However, choriocarcinoma after normal pregnancy, as in our case, is not frequent. In rare instances, it presents in males which originates from the testes [4].

Clinicians seldom suspect these tumors because of rare prevalence and long interval from last pregnancy, and in the most cases surgeons are the first ones who diagnose these tumors. Hence, diagnosis of metastatic choriocarcinoma of the small bowel needs a high index of suspicion [1,4].

Early diagnosis is the only chance of patient’s treatment and subsequently preventing mortality and morbidity. This tumor usually responds to surgery and combined chemotherapy effectively [1,2,6,7,9,10], as in our patient.

In conclusion, since the early diagnosis is the sole chance of patient's survival, physicians should keep in mind this disease in any young female with severe or unexplained GI bleeding.