Coronary Artery Disease is the major cause of mortality and morbidity worldwide. Serum paraoxonase is a high density lipoprotein (HDL)-bound enzyme exhibiting antiatherogenic properties. Oxidative stress plays the major role in the atherosclerotic process. In the pre-sent case control study, serum paraoxonase activity and oxidative stress were monitored in 100 patients with AMI and 50 age and sex matched healthy controls. The levels of total cho-lesterol, triglycerides and low density lipoprotein were significantly (p<0.001) high and the levels of high density lipoprotein were significantly (p<0.001) low in the AMI patients as compared to healthy controls. MDA level was significantly (p<0.001) high and antioxidant activity of PON was significantly low in diabetic (p<0.001) and non-diabetic (p<0.01) AMI patients as compared with controls. Our findings show the increased oxidative stress and decreased paraoxonase antioxidant activity in AMI patients and importance of assessing these markers along with lipid profile in AMI patients.

Serum Paraoxonase (PON) E.C.3.1.8.1.is an arylesterase synthesized in the liver and is a HDL associated enzyme which is responsible for the antioxidant properties of HDL [1,2]. This enzyme plays an importance role in pre-venting low density lipoprotein (LDL) oxidation, it is considered to protect against the development of coronary heart disease [3]. The serum HDL concentration is in-versely correlated with atherosclerosis risk [4]. Many studies showed an association between activity of serum paraoxonase and CHD [5]. PON1 activity is inversely related to the risk of developing an atherosclerotic lesion, which contains cholesterol-loaded macrophage foam cells. Although experimental studies have demonstrated the reduction in PON1 activity due to oxygen frees radi-cals in ischaemia and reperfusion [6]. Oxidative stress induced by reactive oxygen species (ROS) is implicated in the pathogenesis of a variety of vascular diseases, in-cluding atherosclerosis, hypertension and coronary artery disease [7]. Malondialdehyde (MDA) is a breakdown product of peroxidation of long chain fatty acids which accumulate when lipid peroxidation increases [8]. The present study was undertaken to investigate any relation-ship may be hypothesized between PON and MDA, in patients with AMI by evaluating MDA concentration as indexes of oxidative stress.

The study consisted of 100 AMI patients who admitted to the intensive Cardiac Care unit, Hamidia Hospital associ-ated with G.M.C. Bhopal. Patients were further sub grouped as diabetic and non-diabetic according to their history and blood glucose and GHb levels. The diagnosis of AMI was established according to clinical criteria:- Chest pain, which lasted for up to 3 hours, ECG changes (ST elevation of 2 mm or more in at least two leads) and CPK elevation . All patients were assessed as risk factors for coronary artery disease, such as diabetic mellitus, hy-pertension, obesity and hypercholesterolemia. The criteria for diabetes was on the basis of fasting blood glucose concentration of >125mg/dl or a patient already on antidiabetic medication. Systemic hypertensions was con-sidered to be present if the patient was taking antihyper-tensive treatment at the time of hospital admission or if blood pressure was recorded 140 mmHg systolic and/or 90 mmHg diastolic on examination during admission. Those having a serum cholesterol level greater than 250 mg/dl were considered to have hypercholesterolemia. Pa-tients whose body mass index (BMI) >25 kg/m2 were considered as obesities. The control group consisted of 50 healthy adults, who had been matched for age, sex, BMI, socio-economic status etc. were selected for study during routing health check-up program, Hamidia hospital. The study was carried out in Hamidia Hospital attached to Gandhi Medical College, Bhopal, India. Fasting blood samples were collected from both controls and patients for a series of laboratory investigation using standard protocols.

The study was approved by the Institutional Ethical Committee, for biomedical research.

MDA was estimated by colorimetric method of Satoch K. etal. In this method, 2.5 ml of 20% trichloroacetic acid and 1.0 ml of 0.67% TBA are added to 0.5 ml of serum, then the mixture is heated in a boiling water bath for 3o min. The resulting chromogen is extracted with 4.0 ml of n-butyl alcohol and the absorbance of organic phase is determined at the wavelength of 530 nm. The determined values are expressed in terms of malondialdehyde (nmole/ml) used as reference standard – 1, 1, 3, 3-tetraethoxypropane [10].

Patients included in the present study were admitted in Intensive Cardiac Care Unit (ICCU) of Medicine Depart-ment. This study was subjected to 100 AMI Cases within 40-75 years. The laboratory of Biochemistry department is well equipped with semiautoanalyzer, colorimeter and spectrophotometer; hence all investigation were carried out on auto analyzer and spectrophotometer. All investi-gation methods used in this study were standardized in our laboratory.

All the data were analyzed by using the SPSS version 10.0.

Values presented are means ± standard deviation (SD). To test the significance between the study group and the con-trol groups were analyzed by a student’s t - test. The p-value (p <0.05) was considered significant.

Table 1 shows the distribution of risk factors in 100 AMI patients in this study.

Table 1: Risk factor distribution of the AMI patients in this study. 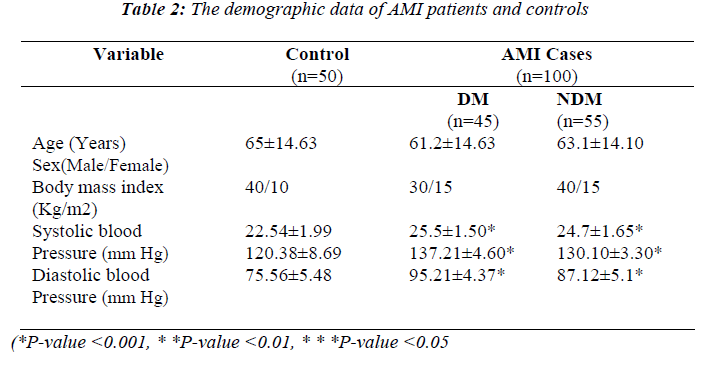 Table 2: The demographic data of AMI patients and controls.

Table 4: MDA and Paraoxonase activity in AMI patients and controls.

The root cause of AMI is mainly atherosclerosis. Oxida-tive stress, arising as a result of an imbalance, between free radical production and antioxidant deficiencies, is associated with damage to a wide range of molecular spe-cies, which includes lipid and lipoproteins also. Athero-sclerosis is a process for which there is substantial evi-dence of a role for oxidative stress. Hypercholesterolemia is universally accepted as a major risk factor for athero-sclerosis, but at any given concentration of plasma choles-terol, there is variability in the occurrence of cardiovascu-lar events, as it has been shown that the oxidative modifi-cation of LDL might be a crucially important step in de-velopment of atherosclerotic plaque [12].

In the present study, serum PON1 activity was signifi-cantly decreased in AMI patients. This reduction in PON activity might play a central role in the atherosclerotic process, because HDL-PON activity modulates the sus-ceptibility of HDL to atherogenic modifications such as glycation and homocysteinylation [13,14]. PON1activity associated with HDL-C in plasma is thought to protect LDL-C oxidation [15]. Several studies have shown that PON1 protects low density lipoprotein (LDL) and HDL against oxidative modification. It can destroy active lipids in mildly oxidized LDL and thereby protect against the induction of inflammatory responses in arterial wall cells. Oxidation of LDL is recognized as an early stage in the development of atherosclerosis, leading to LDL uptake by the macrophage scavenger receptor and hence to forma-tion of foam cells [16,17]. Factors influencing serum lev-els of PON1, either genetic or environmental, will in turn affect the capacity of HDL to protect LDL from oxidation and, consequently, may be linked to atherosclerosis [18]. This is of particular relevance to diabetic patients where higher risk of oxidative stress is suggested to contribute to the greatly increased incidence of vascular disease and other complications [19].

Significant rise in MDA levels (p<0.001), a lipid peroxi-dation product, in our patients is indicative of elevated oxidative stress in AMI patients. This is similar to work of Dubois Rande et al [20] and Mc Murray [21] that showed a decrease in antioxidant enzyme activites and increase in lipid peroxidation products (MDA) in patients with unstable angina and chronic heart failure.

Many study demonstrated a direct association between diabetes and heart failure [22]. CAD occurs due to a number of factors in diabetics; both insulin resistance and elevated lipid levels, common in diabetes primarily trig-gers atherogenic injury. It is also suggested that endothe-lium in diabetic arteries is more prone to atherogenic in-jury due to decreased production of endothelial nitric ox-ide, known to be antiatherogenic, and increased produc-tion of plasminogen activator inhibitor [23].

In conclusion, despite comparable lipid profile, we found significantly low serum PON activity and increased MDA levels in patients with AMI. The rise in MDA and de-creased activity of serum PON more in diabetic AMI pa-tients suggesting the important role of diabetes in the de-velopment of atherosclerosis and finally AMI. We hy-pothesize that reduced PON activity and increased MDA level may contribute to the increased susceptibility for the development of AMI. The present study confirms that there is an elevated oxidative stress reduced antioxidant capacity of PON in AMI patients compared to controls emphasizes the importance of assessing these markers for early diagnosis and therapeutic interventions.