Acute myocardial infarction (AMI) is a critical cardiovascular event due to its associated complications and mortality. The pathogenesis of AMI is complex and usually an array of biomarkers is needed for its diagnosis and prognosis. In this study, we determined serum levels of enzymatic markers of tissue damage including aspartate aminotransferase (AST), lactate dehydrogenase (LDH) and creatine kinase (CK) and the markers of oxidative stress including glutathione (GSH) and malondialdehyde (MDA) in 128 AMI patients and 121 normal subjects. We also studied correlations between the above biomarkers and troponin- T, age, gender, smoking and hypertension. The level of LDH was significantly higher in AMI patients (246.49 ± 9.30 U/L) as compared to control subjects (181.63 ± 5.77 U/L). Although the levels of serum AST (29.07 ± 2.06 versus 22.51 ± 0.80 U/L) and CK (133.78 ± 15.23 versus 121.30 ± 11.93 U/L) were higher in AMI patients than controls, they did not reach the significance level. There was a significant decrease in serum GSH and increase in MDA levels in AMI patients as compared to controls. There was no significant correlation between any of the three enzymatic markers of the tissue damage and age indicating their biomarker value irrespective of the age group. However, gender appeared to be a confounding factor while interpreting AST and CK as it showed a significantly negative correlation with the female gender. There were highly significant correlations between troponin-T and AST, LDH or CK. Although smoking was not correlated with any of the biomarkers studied, hypertension showed significant correlation with CK levels. In conclusion, serum LDH is significantly increased in AMI patients that can be regarded as an early predictor of tissue damage. Both the markers of oxidative stress including GSH and MDA are significantly altered in AMI so they can be used to evaluate oxidative stress in these patients. Further studies are warranted to evaluate the prognostic value of these markers in AMI patients.

Acute myocardial infarction (AMI) is a key component of the burden of cardiovascular disease due to its associated complications and mortality [1]. AMI is the consequence of the chronic development of atherosclerosis lesions. Evidence suggests that reactive oxygen species (ROS) may play important role in the pathogenesis in myocardial infarction [2]. Following ischemia, ROS are produced during reperfusion phase [3,4]. ROS are capable of reacting with unsaturated lipids and of initiating the self perpetuating chain reactions of lipid peroxidation in the membranes [5,6]. In AMI, two distinct types of damage occur to the heart: ischemic injury and reperfusion injury, which lead to mitochondrial dysfunction in heart cells [7]. Diminished antioxidative defense after reperfusion has been found to be associated with impaired myocardial perfusion [8]. Oxidative stress may also lead to the development of serious complications such as left ventricular remodeling after AMI [9] while the redox state of arterial blood can be a predicting factor for left ventricular function after AMI [10].

Aspartate aminotransferase (AST) is an enzyme found mainly in the liver, heart, and muscles. AST is released into the blood by injured liver or muscle cells but is used primarily to detect liver damage. Lactate dehydrogenase (LDH) is an enzyme found in almost all body tissues and plays an important role in cellular respiration. Although LDH is abundant in tissue cells however when tissues are damaged by injury or disease they release more LDH into the bloodstream which can be used to screen for tissue damage. Another enzyme, creatine kinase (CK) is also a better indicator of heart or muscle damage. Assays of serum AST, LDH and CK are widely performed in the early phase of suspected ischemic myocardial injury [11]. CK is a reliable marker for prediction of infarct size and left ventricular function in the acute phase as well as subsequent cardiac events after AMI [12,13]. Murthy and Karmen [14] have found a significant correlation between AST and troponin T in a series of 30 AMI patients.

Although cardiac troponin and CK appear to be the most sensitive and specific markers of myocardial injury there is a need of developing technologies for novel biomarkers or signatures discovery towards point-of-care testing for future management of AMI [15]. Garcia-Pinilla et al [16] have found higher plasma glutathione peroxidase (GPx) activity in patients who experienced acute coronary syndromes and events during follow-up, suggesting GPx as an independent predictor of events during follow-up. Cheng et al [17] have suggested that plasma myeloperoxidase (marker of inflammation) should be considered as a better marker for early diagnosis of AMI. A significant increase in advanced oxidation protein products (AOPP) has been found in AMI patients suggesting its use as a marker of oxidative stress and as a prognostic factor for severe forms of cardiovascular disease [18]. Barsotti et al [19] have observed that advanced oxidation protein products/ thiol ratio may represent a reliable marker of oxidative unbalance in patients with acute coronary syndrome. Lorgis et al [20] validated a new free oxygen radical test (FORT) to assess circulating ROS and concluded that oxidative conditions such as inflammation and diabetes are the major determinants of increased FORT values in patients with AMI. Ho et al [21] have suggested that markers in combination are better for evaluating antioxidant status and monitoring cardiac events than the same markers used separately. In this study, we compared the serum levels of markers of tissue damage (AST, LDH, CK) and markers of oxidative stress including glutathione (GSH) and malondialdehyde (MDA) between AMI patients and control subjects. We also studied correlations between the above biomarkers and the standard cardiac marker (troponin-T) as well as patients’ characteristics including age, gender, smoking and hypertension.

MDA was measured as thiobarbituric acid reactive substances [22]. Serum aliquots were mixed in ice-cold 0.15 M potassium chloride and incubated at 37°C in a metabolic shaker for 1 h. One milliliter of 10% (w/v) trichloroacetic acid was mixed with homogenate followed by centrifugation at 3000 rpm for 10 min. Aliquots (1 mL) of the clear supernatant were mixed with 1 mL of 0.67% (w/v) 2-thiobarbituric acid and placed in a boiling water bath for 10 min, cooled and diluted with 1 mL distilled water. The absorbance of the solution was recorded at 535 nm.

The measurement of GSH in serum was carried out enzymatically according to the modified procedure of Owen [23]. The serum aliquot was mixed with ice-cold perchloric acid (0.2 M) containing 0.01% of EDTA. The homogenates were centrifuged at 10,000 rpm for 5 min. The enzymatic reaction is started by adding 200 μl of clear supernatant in a spectrophotometric cuvette containing 800 μL of 0.3 mM reduced nicotinamide adenine dinucleotide phosphate (NADPH), 100 μL of 6 mM 5,5- dithiobis-2-nitrobenzoic acid (DTNB) and 10 μL of 50 units/ml glutathione reductase (all the above reagents were freshly prepared in phosphate buffer of pH 7.5). The absorbance was measured over a period of 3 min at 412 nm at 30°C.

The data were analyzed by SPSS statistical package (version 10). Mann-Whitney U test (2-tailed) was used to compare means between the patients and controls. Pearson and Spearman correlation tests were used to examine correlations between various biochemical parameters and age, gender, smoking, hypertension, and troponin-T. P values <0.05 were considered as statistically significant. 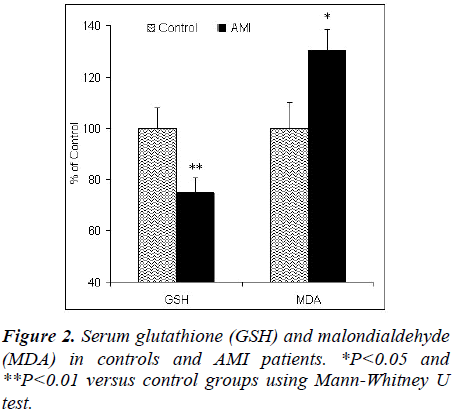 Our results showed highly significant correlations between the standard cardiac marker troponin-T and AST, LDH, and CK, indicating potential relevancy of the later markers for predicting cardiac tissue damage, particularly in the small clinics where troponin analysis facility is not available. We observed significantly high levels of serum LDH in AMI patients as compared to controls however there was no significant difference in AST and CK between the two groups (Fig. 1). Experimental study in rats has shown that elevation in the LDH enzyme activity in the serum correlated with a decrease in the activity of cardiac muscle LDH [24]. Swain et al [25] have found that CK:AST ratio is of limited use for the diagnosis of AMI in elderly patients. Gama et al [26] have suggested that measurement of serum CK and AST on the first two days of admission had a sensitivity of 100% and specificity of 86.8% for the diagnosis of AMI; this has been suggested as an optimal combination of cardiac enzymes to achieve maximum sensitivity with the minimum number of tests. The ratio of m-AST to total AST in serum increased after myocardial infarction, being greatest (20%, range 11- 32%) on the third day after onset. For individuals, peak activities of s-AST correlated well with total CK (r = 0.91) and CK-MB (r = 0.86) peak activities, indicating that s-AST also reflects the infarct size [27]. In patients with AMI, measurement of AST provides diagnostic information that differs from that obtained by determination of CK and LDH enzymes and their isoenzymes [27]. Rotenberg et al [28] have suggested that AST should be determined in every patient with suspected AMI, especially in patients admitted 48-72 h after onset of symptoms, when CK declines to near normal values. Cengiz et al [29] have reported a positive correlation between serum LDH and CK levels in AMI patients. Our findings of significantly high levels of LDH and only slight increases in AST and CK suggest that the former is a better indicator of early tissue damage after AMI. There was no significant correlation between any of the three enzymatic markers of the tissue damage and age (Table 1) indicating their biomarker value irrespective of the age group. However, gender appeared to be a confounding factor while interpreting AST and CK as it showed a significantly negative correlation with female gender (Table 1). Although smoking had no significant impact on the levels of these biomarkers, a significant correlation between hypertension and CK could negate the biomarker potential of CK in hypertensive patients.

Oxidative stress has been regarded as one of the most important contributors to the progression of atherosclerosis [40]. As a natural protective mechanism, myocardial antioxidants inhibit or delay the oxidative damage that consequently prevents thrombosis, myocardial damage and arrhythmias during AMI [41]. However, prolonged oxidative stress due to impaired balance between prooxidant and antioxidant mechanism may lead to lipid peroxidation and tissue damage [42]. There has been a gradual increase in lipid and protein oxidation and a gradual decrease in antioxidant status when the conditions advance from unstable angina to ST-segment elevation myocardial infarction [43]. Blaustein et al [44] have demonstrated that GSH is important in protecting the myocardium against ROS injury and a reduction in cellular GSH content would impair recovery after short periods of ischemia. Experimental studies have shown protective effects of antioxidants against myocardial infarction by inhibiting inflammation and oxidative stress [45-47]. Administration of antioxidants significantly reduced cardiac mortality in patients with AMI [48]. Antioxidant vitamin treatment of AMI patients improves the antioxidant system and reduces oxidative stress, inflammatory process and left ventricular remodeling [49].

In conclusion, serum LDH is significantly increased in AMI patients that can be regarded as an early predictor of tissue damage. Both the markers of oxidative stress including GSH and MDA are significantly altered in AMI so they can be used in tandem to evaluate oxidative stress in these patients. Further studies are warranted to evaluate the prognostic value of these markers in AMI patients.

This study was supported by National Plan for Science and Technology (NPST) Program by King Saud University Project Number 08-BIO571-02. We are thankful for the technical assistance of nursing staff of King Khalid University Hospital, Prince Sultan Cardiac Center and Armed Forces Hospital, Riyadh for sample collection and patient care.