This study aimed to predict the response to pegylated interferon alfa-2a in HBeAg-positive Chronic Hepatitis B (CHB) by evaluating serum Macrophage Inflammatory Protein (MIP) 1α level. Total 31 patients with CHB were enrolled who were treated with PegIFNα-2a at a dose of 180 μg/w subcutaneously for 48 w. Serum MIP-1α level was measured at baseline and different period after PegIFNα-2a treatment. Baseline MIP-1α level of Sustained Virological Response (SVR) group (88.4 ± 21.3 pg/ml) was significantly lower compared to non-SVR group (163.4 ± 77.5 pg/ml). Female patients carrying genotype B, baseline HBV DNA ≤ 7l g IU/ml and baseline MIP-1α level ≤ 100 pg/ml at 12 w after treatment would be defined as easy responders. Those with serum MIP-1α level<110.979 pg/ml had the SVR positive predictive value of 98.065%, and with an area under the receiver operating characteristic curve of 0.817. In conclusion, low serum MIP-1α level is the predictor for the response of HBeAg-positive CHB patients to PegIFNα-2a treatment.

Chemokines promote hepatic inflammation and induce liver immunologic injury in Chronic Hepatitis B (CHB) infection through the recruitment of cytotoxic T Lymphocyte (CTL) to the infected liver [1]. Pegylated Interferon alfa (PegIFNα) based antiviral therapy is the first-line therapy for CHB, but has some disadvantages such as moderate antiviral effect, poor treatment tolerance, and frequent adverse effects. Predicting the response to PegIFNα-2a is the key to distinguish the patients who may benefit from PegIFNα-2a therapy from those who may not [2].

Among CXC chemokines, Macrophage Inflammatory Protein 1 alpha (MIP-1α) is a ligand for CXCR3 which is one of the receptors of Th1 associated chemokines [3,4]. MIP-1α could lead to viral clearance by regulating the differentiation of T helper cells, recruiting CD8+ T and B lymphocytes and inducing NK cells to produce IFN-γ and mediate inflammation [5]. MIP-1α is an inflammatory mediator that increases the secretion of other inflammatory mediators such as TNFα, IL-l and IL-6. MIP-1α activates the immune cells via the interaction with its corresponding receptor Chemokine Receptor 5 (CCR5), which plays a role in immune cell activation and migration in response to viral infections including hepatitis B. Therefore, assessment of CCR5 expression could help better understand the mechanisms responsible for the development of hepatitis B viral infection [6]. We speculated that chemokine MIP-1α would improve viral clearance by promoting the migration of T immune cells to CHB infected liver. In present study, we aimed to evaluate serum MIP-1α level in predicting the response to PegIFNα-2a in HBeAg-positive CHB patients.

This study was approved by institute ethics committee and informed consent was obtained from each participant. Total 31 HBeAg-positive chronic hepatitis B patients who received PegIFNα-2a at Infection Department of Shanghai Tongren Hospital and Ruijin Hospital from February 2007 to September 2012 were enrolled. The inclusion criteria were as follows: adults (22-48 y old), positive HBeAg statue for more than 6 months, HBV DNA levels higher than 105 IU/ml, and serum Alanine Amino-Transferase (ALT) level at 2-10 fold of the upper limit of normal level. The exclusion criteria were as follows: had epilepsy, heart disease, used drug, had hepatic disease such as HCV infection, liver cirrhosis, alcoholic liver disease, and autoimmune-mediated diseases, family psychiatric history, and were pregnant. The candidates with neutrophil count<1.0 × 109/L, platelet count<50 × 109/L and total bilrubin>51 μmol/L were also excluded.

The patients underwent monotherapy with PegIFNα-2a at a dose of 180 μg/w, administered subcutaneously for 48 w, and were followed up for 24 w.

HBV-M, HBV DNA, hepatorenal function and serum MIP-1α levels were evaluated at baseline, 12, 24, 36, 48 w of treatment and at 24-month follow-up. The virus gene types were identified at baseline.

To analyse the efficacy of PegIFNα-2a treatment, we performed single-factor analysis and found that the females with genotype B had a HBV DNA level ≤ 7l IU/ml. MIP-1α level at 12 w post-treatment ≤ 100 pg/ml was used to define the responders (Table 1). However, those parameters at 24 w posttreatment determined by multi-factor analysis could not be the predicting factors (p>0.05). 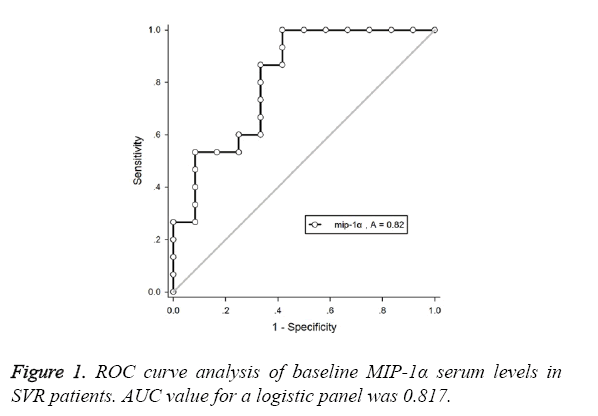 ALT recover, HBV DNA negative conversion, and HBeAg seroconversion in the treatment and follow-up between the responders and non-responders

Identification of the predictors for predicting virological response to the treatment is important to guide the options of antiviral drug for the treatment of viral infection. In this study, for the first time we reported that the chemokine MIP-1α serum level could predict the response to Pegylated IFNα-2a therapy in patients with CHB.

Heydtmann et al. reported that HCV-induced secretion of CCR5 attracted immature plasmacytoid Dendritic Cells (pDCs) to the liver to influence HCV pathogenesis. HCV infected liver cells then trigger the secretion of chemokines, including MIP-1α and MIP-1β, which amplify the recruitment of CD4 T cells [7]. In our study, the percentage of responders to PegIFNα-2a in CHB patients with lower baseline MIP-1α level was higher. A possible explanation could be that decreased number of CHB-positive liver cells after PegIFNα-2a treatment would induce a low level MIP-1α production. The responders had a significant increase of MIP-1α level from baseline at the 12 w post-treatment compared to non-responders. These findings are consistent with previous study that the responders of CHC patients had higher MIP-1α level after 24 h of IFNα and ribavirin combined treatment [8]. However, it is still unclear how increase in MIP-1α level results in decreased response to PegIFNα-2a treatment in HBeAg-positive CHB patients. Further mechanistic studies are needed. In addition, the changes in CCR5 expression pattern in CHB patients during PegIFNα-2a treatment should be characterized to reveal the mechanism by which MIP-1α plays a role in immunological response to HBV infection.

Due to the limitation of small sample size of this study, further large-scale studies are needed to confirm that serum MIP-1α level could predict the response to PegIFNα-2a treatment in CHB patients.

In summary, our study suggests that the increase of MIP-1α level of CHB patients indicates the decreased percentage of long-term response for the management of CHB. Baseline MIP-1α serum level could be used as a predictor of sustained response to PegIFNα-2a treatment in HBeAg-positive CHB patients.