Serum level concentrations of pro-inflammatory cytokines in patients with adenomyosis

1Department of Obstetrics and Gynaecology, the First Hospital of Jilin University, Changchun, China

Materials and Methods: This prospective study examined 16 women with histologically proven adenomyosis and 52 women without adenomyosis, all of whom were undergoing a hysterectomy for nonendometrial pathology at the Department of Gynaecology, the First Hospital of Jilin University, Changchun, China, from December 2011 to September 2012. Serum samples were collected from the patients, and the concentrations of serum IL-2, IL-4, IL-6, IL-10, IL-17A, IL-37, IFN-γ, and TNF were measured by Enzyme-Linked Immunosorbent Assay (ELISA). We then calculated specificity and sensitivity of cytokines, taking Cancer Antigen (CA) 125 as a reference, distinguishing cases from controls by receiver operating characteristic (ROC) curve. The correlation between individual cytokines and CA 125 was also analysed.

Results: IL-37 was detectable in 69.2% and the other cytokines in 30.8% of sera samples from the 52 controls. All the eight cytokines were detectable in the sera samples from 16 patients with adenomyosis. Significantly higher levels of serum IL-37 and IL-10 and significantly lower levels of serum IL-17A and TNF were detected in adenomyosis patients when compared with controls (p<0.05).

Conclusions: Serum levels of IL-10, IL-17A, IL-37, and TNF varied significantly between cases and controls, and could be involved in the pathogenesis of adenomyosis.

Adenomyosis is most common in multiparous women during the transitional years (age 40-50). Unlike endometriosis, adenomyosis is a myometrial lesion characterized by the presence of ectopic endometrial glands and stroma located deep within the surrounding myometrium with adjacent myometrial hyperplasia and hypertrophy [1]. It can result in debilitating pelvic pain (both cyclic and non-cyclic) and abnormal uterine bleeding, and exert a serious adverse effect on quality of life [2]. Abnormal stromal cell invasion has been proposed in the etiology of adenomyosis [3,4]; however, the features in the microenvironment that regulate myometrial penetration by the overlying endometrium and the changes that trigger the development of uterine adenomyosis remain unclear.

Similar to endometriosis, the numbers of macrophages, natural killer cells, and T cells increase significantly in adenomyosis [5] without effective elimination of the ectopic endometrium. Other mechanisms may be involved in the development and progression of adenomyosis, such as immunotolerance and anti-inflammation.

It has been reported recently that several immunosuppressive cytokines including human leukocyte antigen-G [6], interleukin (IL)-10 [7,8], IL-6, and IL-22 may be involved in the pathogenesis of adenomyosis by contributing to the establishment and maintenance of immunosuppression [9,10]. Research has shown that chemokines produced in the ectopic endometrium in women with adenomyosis may contribute to the pathophysiology of adenomyosis. These include IL-6, IL-8, CCL2 (also termed MCP-1), and CCL-5 (also termed RANTES) [11-14].

IL-37 belongs to the IL-1 family, and has been described as an anti-inflammatory cytokine involved in several inflammatory diseases [15]. IL-37 is highly concentrated in the testis, thymus, and uterus, and can be induced in various types of cells such as Peripheral Blood Mononuclear Cells (PBMCs), epithelial cells, Dendritic Cells (DC), monocytes, and keratinocytes [16-18].

Upregulated expression of IL-37 in serum has been reported in many inflammation-related disorders such as Systemic Lupus Erythematosus (SLE) [19], Rheumatoid Arthritis (RA) [20], and acute coronary syndrome [21]. In vitro, IL-37 has been shown to effectively abrogate the expression of proinflammatory cytokines in several cell types, including PBMCs. In vivo, IL-37 has been reported to reduce the inflammatory responses and clinical symptoms of cerebral ischemia, myocardial ischemia/reperfusion injury, psoriasis, and asthma in mouse models [22-27]. In this study, we investigated the expression of IL-37 and other inflammatory cytokines in serum of patients with adenomyosis, and hypothesized that they may be involved in the pathogenesis of adenomyosis.

Serum samples were collected from 16 women with adenomyosis, undergoing a hysterectomy at the Department of Gynaecology, the First Hospital of Jilin University, Changchun, China, from December 2011 to September 2012. All patient information was obtained from the case management system in the medical records room of the hospital. The women were aged 36-52 (mean 44.50, Standard Deviation [SD] 5.1). Fifty-two patients with leiomyoma or benign ovarian cysts, undergoing hysterectomy, were recruited as controls. The control patients were aged 38-50 (mean 38.0, SD 6.9), had no evidence of adenomyosis in the histopathological examination of their hysterectomy specimens, and had no visible pelvic inflammation or endometriosis at the time of hysterectomy. Control patients had no active infections or inflammatory disease. This study was conducted in accordance with the Declaration of Helsinki. This study was conducted with approval from the Ethics Committee of the First Hospital of Jilin University. Written informed consent was obtained from all participants.

Inclusion criteria for the two groups were a normal menstruation cycle, absence of autoimmune or tumor disease, and no hormone therapy within the 6 months preceding surgery.

Adenomyosis was confirmed by histological examination. Serum samples (2 ml) were collected before the surgery and centrifuged. These samples were stored in dry tubes and frozen at -80˚C until use.

All statistical analyses were performed in SPSS version 19.0 (IBM SPSS, Armonk, NY, USA). Adenomyosis and control samples were analysed by Student's t-test for quantitative variables. Considering the non-Gaussian distribution of serum IL levels, statistical comparison between two groups was performed with the Mann-Whitney U-test. Correlations between serum IL levels and clinical characteristics of disease severity were examined using the nonparametric Spearman's rank correlation test. Each variable was studied independently, and they were not analysed in a multitest procedure. A twotailed p<0.05 was considered statistically significant.

Table 1. The major characteristics of cases.

Serum IL-2, IL-4, IL-6, IL-10, IL-17A, IL-37, IFN-γ, and TNF levels were measured in all patients. Among the eight cytokines, serum IL-2, IL-4, IL-6, and IFN-γ concentrations were not statistically different between the adenomyosis and control groups (Table 2). Serum IL-10, IL-17A, IL-37, and TNF concentrations differed significantly between adenomyosis and control groups (p<0.01). Significantly higher levels of serum IL-10 and IL-37 and significantly lower levels of serum IL-17A and TNF were detected in adenomyosis cases than in controls (p<0.01, Figure 1). 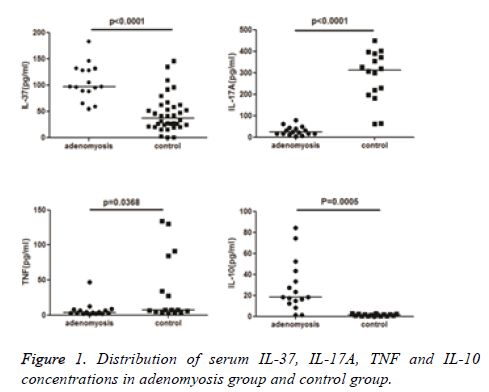 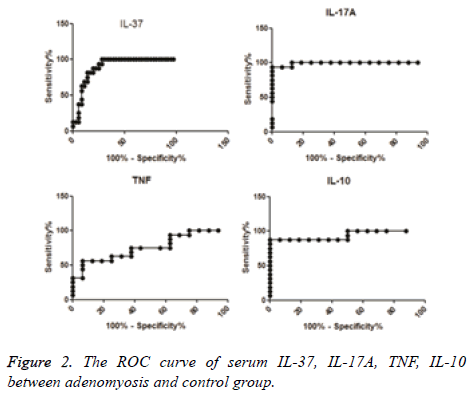 We collected CA 125 values from the patients’ clinical files. We then analysed the correlation between levels of serum IL-10, IL-17A, IL-37, TNF, and CA 125. We found that serum IL-37 levels had a positive correlation with serum CA 125 levels (Figure 3), than with other cytokines. 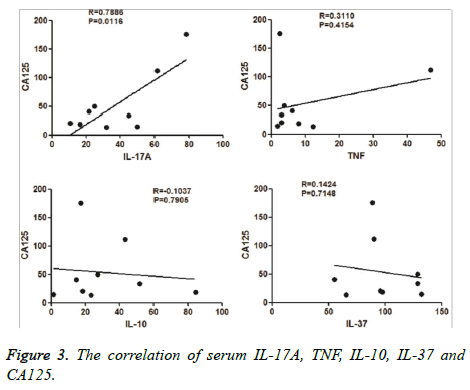 IL-37, formerly termed IL-1 Family member 7 (IL-1F7), was originally discovered in silico in 2000 by several independent groups, and many papers have reported up regulation or down regulation of IL-37 in human diseases, including inflammatory diseases and autoimmune diseases [28]. The IL-37 protein is endogenously present at low levels in human PBMCs, and can be up regulated by inflammatory stimuli and cytokines (Toll- Like Receptor [TLR] agonists, IL-1, IL-18, TNF, IFN, TGF). Other factors exert an inhibitory effect on IL-37 (e.g., IL-12, IL-32, GM-CSF+IL-4) [29]. This suggests that DC differentiation is a consequence of inflammation and does not occur under conditions such as inhibition of inflammation. IL-37 is a down regulator of the inflammatory response by selective inhibition of inflammatory cytokine production through a Smad3-dependent mechanism.

IL-37 plays a protective role in models of colitis [30], Lipopolysaccharide (LPS)-induced septic shock [31], and obesity-induced insulin resistance [32], and is known to regulate innate immune responses. It has become increasingly clear in the past several years that innate immunity can regulate adaptive immunity by modulating the production of cytokines and chemokines and affecting the activity and function of DCs [33-35]. However, the role of IL-37 in adaptive immunity has remained largely unexplored.

In our study, we found that serum levels of IL-37 increased in patients with adenomyosis. We presumed that the immunotolerance associated with IL-37 had an effect on the progression of adenomyosis. Our data showed that levels of IL-10, IL-17A, and TNF were altered in patients with adenomyosis. A previous study found that IL-6 mRNA was significantly expressed in Endometrial Stromal Cells (ESCs) after in vitro co-culture with macrophages in adenomyosis. This aberrant behaviour of ESCs may play a role in the formation of ectopic endometrial implants in adenomyosis. In our study, however, we did not find alterations in IL-6 levels between cases and controls.

Levels of CA 125 are known to be positively correlated with disease severity. We found a positive correlation between levels of IL-37 and levels of CA 125. Perhaps this indicates an association between IL-37 and disease severity, but further studies are required. In this study, levels of IL-10, IL-17A, IL-37, and TNF were higher in the adenomyosis group, and displayed sensitivity and specificity. Although the sample size was small, these findings indicate that serum levels of IL-10, IL-17A, IL-37, and TNF differ between adenomyosis cases and controls, and may be involved in the pathogenesis of adenomyosis.