Bipolar disorder is one of the complex psychiatric disorders courses with episodes of mania/hypomania, depression and mixed [1]. Since its pathophysiology cannot be determined certainly, oxidative stress and inflammatory processes are one of several important factors under investigation along with many other possible etiological mechanisms [2].

Oxidative status is described as a balance between the development and inactivation of reactive oxygen species (ROS) [3]. Any increase in the rate of ROS development, or decrease in their inactivation, may disrupt this balance, resulting in oxidative damage. Ischemia modified albumin (IMA) is a biomarker, which is formed as a consequence of modification of albumin by ROS. Consequently the elevations in ROS may modify the N-terminal portion of albumin causing an increased formation of IMA. These different levels of IMA in the serum may be used as a marker to oxidative stress [4].

Since recent data showed variable results about the complex role of biological and environmental factors in the etiology of affective disorders; last studies started to investigate oxidative stress, which can be altering nerve cell composition and take part in pathophysiology [5]. To the best of our knowledge, this is the first study reporting the analysis of IMA levels on bipolar disorder patients in remission. Aim of our study is to contribute these data about oxidative stress in bipolar disorder, by detecting IMA levels of bipolar disorder patients in remission and also by comparing these results with healthy controls.

Our study's sample consisted of 35 outpatients with bipolar disorder, who being in remission (RE). The outpatients who had applied to the psychiatry department outpatient clinic between June 2015 and December 2015 and who met Diagnostic and Statistical Manual of Mental Disorders, 5th Edition (DSM-5) criteria for bipolar disorder I. 36 healthy individuals, who were working as hospital staff and had no prior psychiatric history or on-going complaints, formed the control group (HC). For the entire sample, inclusion criteria were an age between 18 and 65 y and no history of dementia or cognitive deterioration. The participants with any acute or chronic disease or medication or any addiction except smoking during the study were not included in the study.

Two psychiatrists discussed the patients to confirm that the outpatients (n=35) did not meet the DSM-5 criteria of any bipolar disorder episode (depressive, manic, or hypomanic) for at least 6 months and that the control group participants (n=36) had no proof of a present or previous psychiatric disease. The Hamilton Depression Rating Scale (HAM-D) and Young Mania Rating Scale (YMRS) were also used to support the diagnoses of RE (i.e., HAM-D score<7 or YMRS score<4).

This study was approved by the Ethical Committee from the research office of Ankara Polatli Public Hospital. All the participants gave informed consent for participation in the study.

Hamilton depression rating scale (HAM-D): The original version of the scale, which was conceived by Hamilton in 1960, contains 17 items, each of which is scored as 0-4; the maximum total score is 53. The patients were scored with the 17-item version in this study .Williams advanced a recent version of the HDRS to improve the inter-rater reliability (Structured Interview for Hamilton Depression Rating Scale-21) [6]. The Turkish version of the scale was reported to be valid and reliable [7]. In this study patients, were evaluated with the 17-item version.

Young mania rating scale (YMRS): YMRS is an 11-item diagnostic criterion used to evaluate the severity of mania. Each scale item measures 5 degrees of severity. The Turkish version of the scale was reported to be valid and reliable [8].

Venous blood samples were drawn in the morning around 8 am into gel containing tubes and centrifuged at 1300 g for 10 min to analyze the separated sera. The serums were stored at -80°C until the day of analysis. Haemolysed and icteric serums were not used in this study.

IMA was evaluated by a colorimetric assay developed by Bar- Or et al. based on measurement of unbound cobalt after incubation with serum [9]. Elevated amounts of IMA results in less cobalt binding and more residual unbound cobalt available for complex with a chromogen (dithiothreitol (DTT)), which can be measured photometrically; the procedure was as follows: 50 μL of 0.1% cobalt chloride (Merck KGaA, Darmstadt, Germany) was added to 200 μL of serum, gently mixed, and waited 10 min for adequate cobalt-albumin binding. 50 microliters of DTT (Merck KGaA, Darmstadt, Germany), at a concentration of 1.5 mg/ml, was added as a colorizing agent and the reaction was stopped 2 min later by adding 1.0 mL of 0.9% NaCl. The colored product was measured using a spectrophotometer at 470 nm (Shimadzu, UV1601, and Japan) and compared to a serum cobalt blank without DTT and reported in absorbance units (ABSU).

Statistical Package for the Social Sciences (SPSS) 20.0 was used for the analysis. The Kolmogorov-Smirnov test was used to determine whether the parameters were normally distributed. Results were expressed as mean and standard deviations (SD). The two groups (RE and HC) were examined with the paired ttest. A p-value of less than 0.05 was considered to be statistically significant.

There was no significant difference between both group, in terms of age, gender and IMA levels (p>0.05). Figure 1 shows IMA levels in RE and HC groups. 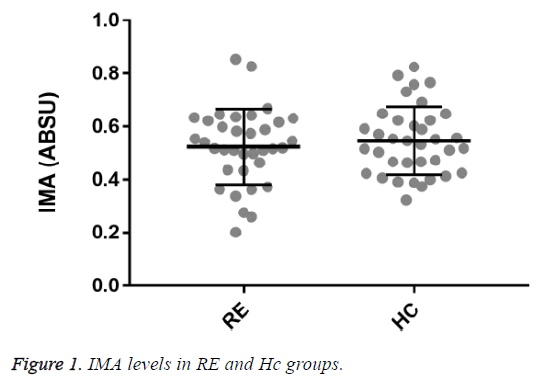 Figure 1: IMA levels in RE and Hc groups.

Oxidative stress plays an important role in the pathophysiology of many diseases, particularly in neurological and psychiatric diseases due to the central nervous system sensitivity to ROS [10]. There is evidence that IMA increases in diseases associated with ischemia and oxidative stress [11,12]. The induced ROS modify the N-terminal portion of albumin causing an increased formation of IMA. In other words, IMA is formed as a consequence of modification of albumin by ROS [4].

In several studies, the role of oxidative imbalance in the etiological of bipolar disorder has investigated [13-19]. However, evidence about oxidative stress in bipolar disorder is controversial. Some studies shown that oxidative stress might be involved in the pathophysiology of bipolar disorder; in a study, Na+-K+-ATPase activity and serum Thiobarbituric Acid Reactive Substances (TBARS) levels were significantly decreased and increased respectively in RE when compared to the HC [13]. In an another study conducted on patients with bipolar disorder in remission, Nitric Oxide (NO) and Superoxide Dismutase (SOD) levels found to be higher than in the HC [14]. There is also a study; Lipid Hydroperoxides (LPH) levels were found significantly high than in HC [15].

The current study reports that IMA levels were not significantly different between patients with bipolar disorder in RE and HC. These results show consistency with the findings of some prior studies researching oxidative stress markers in bipolar disorder. In a study, blood levels of Total Antioxidant Status (TAS), Total Oxidant Status (TOS), and Oxidative Stress Index (OSI), which are other molecules indicating oxidative stress, were showed not to differ significantly between the bipolar disorder patients in RE and HC [16]. In another study, SOD levels could be detected no significant difference between RE and HC, but Thiobarbituric Acid Reactive Substances (TBARS) levels were significantly higher in RE compared to HC [17]. Results of another study demonstrated that SOD and S100B levels were found no significant changes in RE when compared to HC [18]. There is also a study, total radicaltrapping antioxidant parameter (TRAP) and TBARS were found no significant changes between RE and HC [19].

This study was presented as a poster presentation at the 41st FEBS Congress September 2016 in Kusadasi, Turkey. We are grateful to the hospital staff who volunteered for this study.