Selection of surgical approach for the treatment of bilateral thyroid carcinoma

We analyzed 1999 patients diagnosed with differentiated thyroid carcinoma who underwent primary thyroid surgery between June 2008 and December 2011, and among that cases, there were 556 cases diagnosed with bilateral thyroid carcinoma, including 97 males, and 459 females, with a male to female ratio of 1:4.7 and an occurrence between 18-70 years of age (mean: 42.58 ± 9.07). This study was conducted in accordance with the declaration of Helsinki. This study was conducted with approval from the Ethics Committee of China- Japan Union Hospital of Jilin University. Written informed consent was obtained from all participants.

Unilateral thyroid carcinoma cases were treated with gland and isthmus resection, or with contralateral lobe subtotal resection. A small number of cases with failed rapid pathological intraoperative diagnosis underwent subtotal thyroidectomy. Cases with clear diagnosis of bilateral thyroid carcinoma were treated with total or near total thyroidectomy, and few cases with failed intraoperative rapid pathological diagnosis were treated in accordance with unilateral thyroid cancer treatment or benign thyroid disease. We dissected the recurrent laryngeal nerve during the whole resection, and intraoperative recurrent laryngeal nerve monitoring (IONM) was selectively performed. A sophisticated technology was used for the protection of parathyroid outer coating; upper parathyroid was preserved in situ and to protect the surrounding blood supply, a small amount of fat tissue around the gland was left. Inferior parathyroid glands were preserved in situ without affecting central lymph node dissection and its blood supply. If the blood supply was identified to be poor, parathyroid transplantation within the sternocleidomastoid was performed. Routine intraoperative PTH rapid detection of bilateral thyroid cancer is imperative. Upon detection of a significant decrease in the PTH, blood supply should be checked and tissue resected again, and transplantation should be performed within the sternocleidomastoid if necessary.

All cases were treated with L-thyroxine after surgery. In low risk cases, TSH level was maintained at 0.2~0.5; whereas in high risk cases it was maintained at lower than 0.1. I131 treatment was administered if cervical lymph node metastasis was found and total or near total resection was performed. Patients were followed up at the clinic or over the telephone every 3-6 months.

Continuous variables were presented as mean + standard deviation (SD) and compared by t-test or one-way ANOVA among groups. While the frequency distributions of categorical variables among groups were presented with number (proportion) and compared by Pearson χ2 test. The Hardy– Weinberg equilibrium for each variant was assessed by Pearson χ2 test. A two-tailed P value of <0.05 was considered statistically significant. SAS for Windows version 9.1 (SAS Institute Inc., Cary, NC) was used for all statistical analyses. 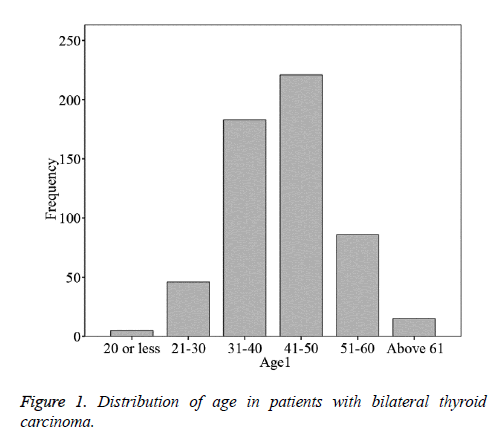 Figure 1: Distribution of age in patients with bilateral thyroid carcinoma. 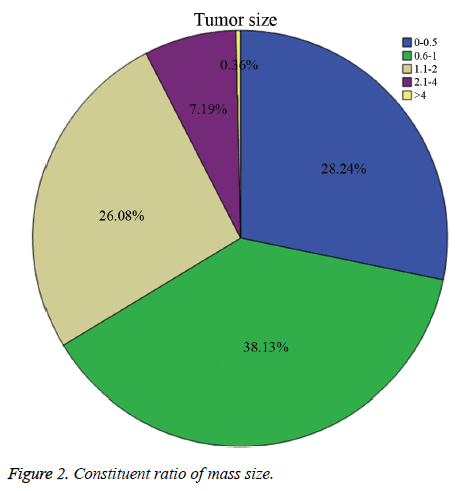 Surgical treatment should aim at avoiding re-operation and reducing complications (recurrent laryngeal nerve and parathyroid injury). A unified view on the treatment of bilateral thyroid cancer is total thyroidectomy or near total thyroidectomy. For bilateral lobes foci, total thyroidectomy is appropriate. For unilateral foci plus isthmus foci, thyroid near total resection is suitable. Bilateral thyroid cancer occurred rapid proliferation, metastasis and invasion within the gland, prone to cervical lymph node metastasis, for which bilateral central lymph node metastasis accounts for 42.9%, significantly higher than the unilateral thyroid cancer. Therefore, resection of all possible foci to reduce recurrence rate is necessary. Recurrence was observed only in 1 patient following subtotal lobectomy. Furthermore, total thyroidectomy would benefit Tg and 131I monitoring for recurrence, and would be beneficial for patients with metastases that occur after 131I therapy. For cases of unilateral foci and isthmus, lobectomy and isthmusectomy were performed, and if feasible, total or near total thyroidectomy was performed. The drawback of near-total resection is the limitation of early I131 monitoring for recurrence. Some scholars have suggested that lateral lobe resection or subtotal resection is feasible for small unilateral lesions as well as bilateral thyroid cancer, mainly to reduce the recurrent laryngeal nerve and parathyroid damage. Thyroid surgery is also performed as recurrent laryngeal nerve and parathyroid surgery. Extent of surgery should be based on tumor staging and prognostic factors. Quality and complications of surgery depend on the surgeon's skill and experience. Scholars consider that after total or near total resection, the recurrent laryngeal nerve and parathyroid temporary injury rates are greater than those observed in subtotal thyroidectomy, with no significant increase in permanent damage [18]. Our data confirmed this point.