Saliva as a diagnostic tool, is gaining attention world wide. Due to non-invasiveness of its collection and non-necessity of skilled technician for collection, and presence of sensitive biomarkers in saliva, it is considered as a worthwile diagnostic tool. Present study made an attempt to evaluate the status of proteins, sialic acid and oxidative stress in oral squamous cell carcinoma. Unstimulated whole saliva samples were collected from healthy controls and oral squamous cell carcinoma (OSCC) patients. Salivary levels of total proteins, free sialic acid, protein-bound sialic acid, malondialdehyde and glutathione were assayed by spectro-photometric methods. OSCC patients had higher salivary levels of total proteins, free sialic acid, protein-bound sialic acid and malondialdehyde, and lower levels of glutathione, when compared to healthy controls. The changes correlated with progression of cancer as evident by more pronounced changes of above biochemical parameters in well-differentiated cases of OSCC, compared to moderately differentiated OSCC and patients with pre-malignant le-sions of OSCC. Elevated levels of proteins and sialic acid suggest role of glycoproteins in carcinogenesis. Oxidative stress is involved in etiopathology of oral cancer, as evident from elevated malondialdehyde and decreased glutathione. Salivary parameters could be of use in diagno-sis and prognosis of oral cancer.

Cancer is the second leading cause of death worldwide. Eleven million new cases of cancer are diagnosed every year [1]. It is estimated that there are approximately 2-2.5 million cases of cancer in India at any given point of time with around 7,00,000 new cases being detected every year . Head and neck squamous cell carcinoma occurs in 50,000 new cases annually in the USA, results in more than 13,000 deaths every year [2]. India has the highest incidence of oral squamous cell carcinoma in the world [3,4]. About 50-70% of cancer-related deaths in India are due to oral cancer. [1,5]. Age-standardised incidence rates of oral cancer per 100,000 population in India were estimated to be 12.8 in men and 7.5 in women [3,4]. The data from WHO Global Oral Health Programme sug-gested that tobacco use and excessive alcohol consump-tion were estimated to account for about 90% of oral can-cers [3-5]. Hereditory factors and viral infections, along with lifestyle and dietary factors contribute to the etiology of oral cancer [6].

Glycoconjugates play important role in malignant trans-formation of cells. Aberrant glycosylations are the uni-versal phenomena in malignant transformation of cells. Carbohydrate residues of glycoproteins and glycolipids are released into the circulation through increased turn-over, secretion and/ or shedding , and are of immense in-terest for their diagnostic and prognostic value in cancer [7-9]. Increased serum levels of total proteins (TP), total sialic acid (TSA), lipid-bound sialic acid (LSA), and in-creased ratio of TSA to TP, have been reported by previ-ous works. Studies have indicated the usefulness of blood levels of TSA, LSA and TSA to TP ratio in diagnosis, prognosis and management of cancers of various types [7-9].

Free radicals are implicated in the pathogenesis of multi-stage process of carcinogenesis. They are proposed to cause DNA base alterations, strand breaks, damage to tumor suppressor genes and enhanced expression of proto-oncogenes [10-13]. The burst of reactive oxygen species and reactive nitrogen species, has been implicated in the development of cancer. Increased blood levels of lipid hydroperoxide, malondialdehyde, and decreased blood levels of antioxidants catalase, superoxide dismu-tase, glutathione peroxidase, vitamin C and vitamin E, have been reported in oral cancer patients [13-16].

Saliva as a diagnostic tool, has gained lot of attention in last three decades [17,18]. Whole saliva can be collected non-invasively and no special equipment or skilled person is needed for saliva collection. Salivary chemical consti-tuents have been analyzed in autoimmune diseases, syste-mic diseases, cancer and infectious conditions. Salivary levels of hormones and drugs were also monitored [17-23]. In India, few researchers have attempted salivary analysis in cancer, oral diseases and infections [24-26].

Salivary analysis is not given due thrust in India. There is paucity of studies on analysis of salivary glycoconjugates and oxidative stress markers in cancer. Because of its proximity to oral neoplasms and pre-malignant lesions, saliva could be the ideal tool for screening, diagnosis, and management of oral cancer.Present study has made an attempt to evaluate the status of salivary total proteins, sialic acid, malondialdehyde and glutathione in oral squamous cell carcinoma.

The study was hospital-based and was carried out at Fa-ther Muller Medical College and Hospital, Mangalore. The study protocol was approved by the Ethical Commit-tee of the institution. Following were the study groups :

Group –II : Comprised of patients who visited the oncol-ogy department and diagnosed of oral squamous cell car-cinoma. Only male patients were included. The diagnosis of OSCC was based on clinical examination and histopa-thological study. The subjects of group-II were further subdivided into three subgroups :

Total number of subjects in group-II was seventy. In-formed consent was obtained from all the subjects of the study.

Unstimulated saliva samples were collected between 9-11 AM, according to the method of Navazesh (27). This was to ensure that the variability in salivary flow rate and composition, be minimized. The subject was asked to rinse the mouth with distilled water thoroughly to remove any food debris and then after 10 minutes, directed to spit into a sterile plastic container. Forcible spitting was avoided.

The saliva samples were centrifuged at 3000 rpm for 10 minutes and the supernatant was taken for analysis of fol-lowing parameters:

1. Total Proteins : estimated by Lowry’s method (28),
2. Sialic acid : Saliva was treated with ethanol to pre-cipitate proteins. Sialic acid contents of both pre-cipitate and supernatant, were estimated. This was based on reaction of sialic acid with acid ninhydrin reagent. The absorbance of colored product was measured at 470nm. Sialic acid contents of super-natant and precipitate were considered as “ free sialic acid” and “protein-bound sialic acid” respec-tively (29),
3. Malondialdehyde, the marker of lipid peroxidation, was estimated as thiobarbituric acid-reactive sub-stances (TBARS) (30),
4. Glutathione, reduced (GSH) : GSH was estimated by the method of Beutler et al (31), which was based on reduction of 5,5/ -dithiobis-(2 nitrobenzoic acid) by GSH.

The values were expressed as mean ±S.D. The data were analyzed by Student’s t test for significance of differ-ences between each group. 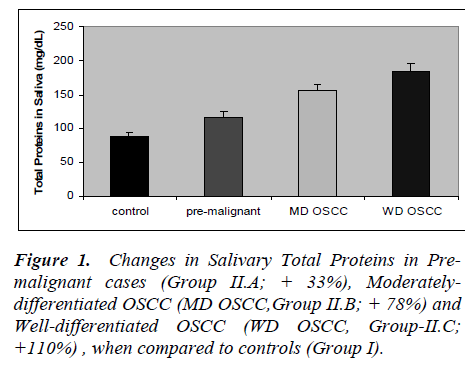 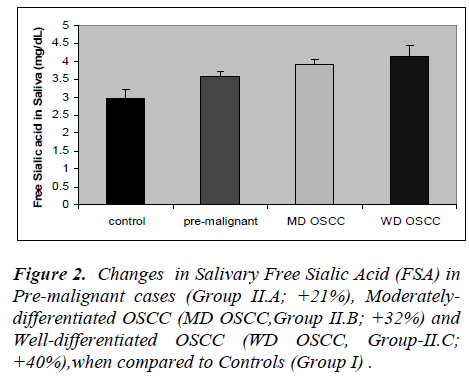 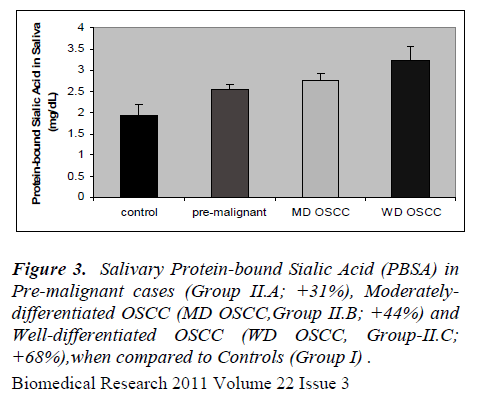 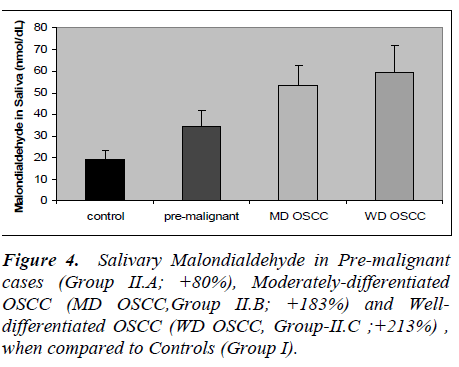 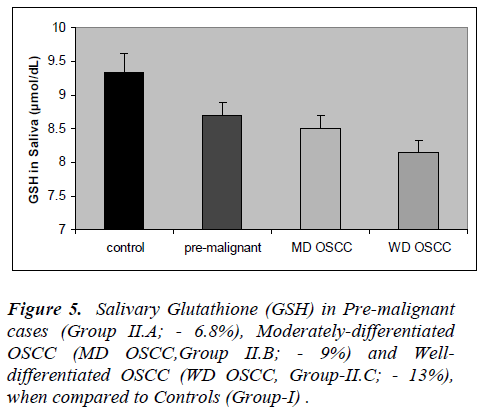 Present study revealed altered salivary total protein and sialic acid status in OSCC. The changes were seen not only in well-differentiated cases but also in moderately differentiated OSCC and cases of pre-malignant lesions. Sialic acid is the major carbohydrate component of gly-coproteins , being present at their termini. Increased se-rum levels of total proteins (TP), total sialic acid (TSA), lipid-bound sialic acid (LSA), and increased ratio of TSA to TP, have been reported by previous studies, in cancers of cervix, ovary, breast, colon and oral cavity (7-9). Cir-culatory levels of sialic acid are proposed to reflect changes in cell surface characteristics, adhesiveness and cellular invasiveness. Salivary or serum levels of sialic acid altered also in non-cancerous conditions like diabetes mellitus, pregnancy and inflammations. Hence, workers in this field considered sialic acid as a sensitive but, not specific tumor marker [7-9]. Salivary proteins and sialic acid were assayed by few researchers in cases of OSCC. Sanjay et al [26] observed elevated levels of total pro-teins, free sialic acid and protein-bound sialic acid in the saliva in OSCC. Elevated salivary levels of proteins de-fensin-1 and statherin were seen in oral cancer [32,33]. Salivary levels of epidermal growth factor, CA-125, CA- 15-3 and CEA were evaluated as tumor markers in can-cers of oral cavity, breast, ovary and cervix [17,23]. San-jay et al (26) observed increased salivary level of total sugars in oral cancer. Some researchers have hinted at possible interactions between antioxidant enzymes and free sialic acid in saliva. They also postulated its role as a hydroxyl radical scavenger, as a component of salivary mucin [34].

Saliva is equipped with enzymatic and non-enzymatic antioxidants. The salivary antioxidant system, is proposed to have a fundamental anticarcinogenic role in the oral cavity, and is aimed at fighting reactive oxygen spe-cies(ROS) and reactive nitrogen species(RNS), which originate from smoking, alcohol, food, drink, and/or vari-ous other volatile sources, entering freely into the oral cavity through the mouth. An age-related reduction in the salivary antioxidant capacity, has been reported (35). Almadori et al [36] reported higher salivary levels of GSH in patients of oral and pharyngeal cancers when compared to healthy controls and patients of laryngeal cancer. There has been a report of decreased levels of antioxidants, and increased levels of protein - and DNA-oxidation products in saliva of OSCC patients [37].

Glutathione (GSH) is the major thiol compound of human body with multiple functions. It is an inevitable molecule concerned with free radical scavenging and detoxifica-tion. Decreased GSH level in saliva in OSCC suggests its depletion due to increased oxidative stress. GSH-mediated action of glutathione S-transferase is responsi-ble for detoxification of many xenobiotics including car-cinogens (38). Increased utilization of GSH in detoxification of carcinogens thus, increased demand could be the reason for its decreased levels in oral cancer.

Saliva as a diagnostic tool has distinct advantage of non-invasiveness of sample collection and non-necessity of skilled persons for its collection. Salivary sialic acid and oxidative stress could serve as sensitive markers of oral squamous cell carcinoma. There is a need for detailed study with larger sample size, correlating findings of sali-vary analysis with those of blood analysis, before estab-lishing saliva as a reliable laboratory tool for clinical ap-plications.

We are indebted to Rev.Fr.Patrick Rodrigues, the director, Rev.Fr.Denis D’Sa, the administrator, Dr. Jayaprakash Alva, the dean and Dr.B.Sanjeev Rai, the chief of medical services, for the infrastructure and support. We thank Dr.Malathi M, Professor and Head of Biochemistry for her kind encouragement and co-operation. The authors are grateful to Indian Council of Medical Research, New Delhi, for the grant of a Short Term Research Fellowship to Ms.Kavya Prabhu, to carry out a part of this research project.