Role of maternal serum ischemia modified albumin as a biochemical marker in preeclampsia.

Preeclampsia (PE) a pregnancy specific disorder is the most common cause of fetal and maternal death yet no specific prevention and treatment is available. Reliable biochemical markers for prediction and diagnosis of PE can have a better impact on maternal health and several of the markers have been suggested till now. Recently Ischemia Modified Albumin (IMA) has emerged as a marker in different diseases where ischemia is the origin or consequence behind disease pathology. Therefore this study was undertaken to evaluate the role of maternal serum IMA in PE and its correlation with the oxidative stress. 45 patients with PE were selected for the study and compared with 31 pregnant healthy controls. IMA IMA/Albumin and Malondialdehyde (MDA) with other routine biochemical markers were estimated in these patients. The results were then statistically analysed. IMA levels were found significantly raised in PE patients as compared to normal pregnant controls (p value <0.001). A significant correlation was also found between IMA levels and MDA levels in PE (r =+0.3 p value <0.05). Thus we conclude that IMA generated by hypoxia/ischemia driven oxidative stress is also raised in PE hence can be used as a biomarker in PE. Further studies are needed to establish the relationship between IMA and disease process and its association with severity of disease. Keywords: Preeclampsia Ischemia Modified

Normal placental development is essential to normal fetal development. Disorders which affect around a third of human pregnancies primarily include miscarriage and preeclampsia. Recent changes in human lifestyle such as delayed childbirth and hypercaloric diets may have increased the global incidence of placental-related disorders over the last decades. There is mounting evidence that oxidative stress or an imbalance in the oxidant/antioxidant activity in utero-placental tissues plays a pivotal role in the development of placental-related diseases. It is one of the most challenging complications of pregnancy affecting 2% of pregnancies is a major cause of maternal and perinatal morbidity and mortality [1].

As placental hypoxic conditions are found in preeclampsia and oxidative stress is implicated in its pathogenesis maternal serum Ischemia Modified Albumin(IMA) can be a potential biochemical marker of preeclampsia. Under physiological conditions the amino terminal of Human Serum Albumin (HSA) binds to transition metals. Ischemic reperfusion injury generates reactive oxygen species which modifies the N-terminal region of HAS, which reduces its capacity to bind to the transitional metals. This chemically changed albumin is called as ischemia modified albumin.

Keeping this in view this study was designed with an objective to estimate serum IMA and determine its benefit as a diagnostic and prognostic marker [6-8].

The present study included 45 preeclamptic women from OPD IPD and labour room of department of obstetrics and gynaecology as first diagnosed case of preeclampsia without any history of antihypertensive treatment and 31 healthy pregnant women. The cases and control group were age and gestational age matched.

Selection of preeclampsia cases were made with the criteria of pregnant women with blood pressure =140/90 mm of Hg with proteinuria > 0.3 gm/l or > 1+ measured by dipstick. Women with known medical conditions history of recurrent miscarriage hypertension or diabetes prior to pregnancy and gestational diabetes were excluded from the study. Blood was collected from preeclamptic cases at the time of admission before subjecting them to antihypertensive therapy. Ultrasonography was done to confirm the gestational age and exclude any obstetrical or gynaecological disorder.

Routine biochemical parameters like haemoglobinfasting blood sugar serum albumin serum urea creatinine uric acid were estimated in the venous blood of cases and control using FLEXOR –XL autoanalyser. Urinary protein was estimated by dipstick method. Serum IMA was done according to Bar Or et al 2000 [9]. Known amount of cobalt was added to serum sample & the unbound cobalt was measured by the intensity of coloured complex formed after reacting with dithiothreitol by spectrophotometer at 470nm. IMA values were expressed in U/ml. One IMA unit is defined as “µgm of free cobalt in the reaction mixture per ml of serum sample”. Serum IMA/Alb was then calculated. Serum MDA was estimated by Thiobarbituric Acid reactive substances by Satoh K [10]. Institutional ethical committee approval was obtained for the study and informed consent was taken from all women. All analyses were performed by using SPSS statistics package.

Preeclampsia is associated with defective placentation leading to failure of conversion of small diameter high resistance vessels to large diameter low resistance vessels hence leading to ischemic reperfusion injury leading to oxidative stress and generation of free radicals [11,12]. Eclampsia is the end stage of the disease characterized by generalized seizures [13]. Pre-eclampsia and eclampsia complicate 2%–8% of pregnancies and overall 10%–15% of direct maternal deaths are associated with these conditions [14].

Biochemical markers not only allow detection of patients at risk but can also help in grouping patients into different categories according to their severity for timely intervention. Many different biophysical and biochemical markers have been investigated based upon pathophysiology of the disease but their reliability in predicting preeclampsia has been inconsistent.

Serum IMA has been observed to be significantly increased in diseases where oxidative stress is the consequence of the disease process. In the present study a significant rise in serum IMA was seen in preeclamptic women compared to normal pregnant women. There occurs hemodilution in pregnancy leading to decrease in plasma albumin concentration so IMA was normalized to albumin by calculating IMA/Albumin ratio. These observations were in accordance with the studies done by Gafsou et al [15] and Yusuf Ustun et al [16]. Placental hypoxia causing ischemic reperfusion injury results in the generation of free radicals which in turn causes alteration of NH 2 terminus of human serum albumin resulting in reduced binding of albumin to cobalt compared to normal pregnant control.

Significant increase in serum MDA was also observed in our study which was parallel to the observations of Ebru Dikensoy et al [18] YoneyamaY et al [19] and Mohd. Sahail et al [20]. These findings on maternal serum MDA provides further evidence that inappropriate or excessive lipid peroxidation may play an important role in pathophysiology of preeclampsia. There is significant positive correlation between the maternal serum IMA and MDA (Figure 1) as well as serum IMA/ALB and MDA in preeclampsia (Figure 2) suggesting that there occurs increase in serum IMA and IMA/ALB with increase in oxidative stress due to ischemia. This is in accordance with the work of Debasis Roy et al [21] who suggested that increased IMA levels may result from increased oxidative stress whether caused by ischemia reperfusion injury or other mechanisms linked to primary reduction in blood flow. 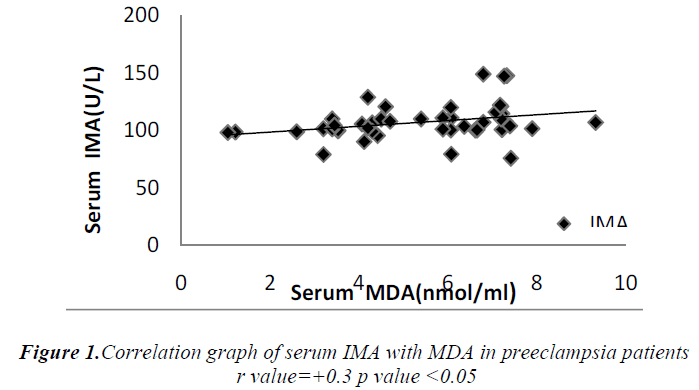 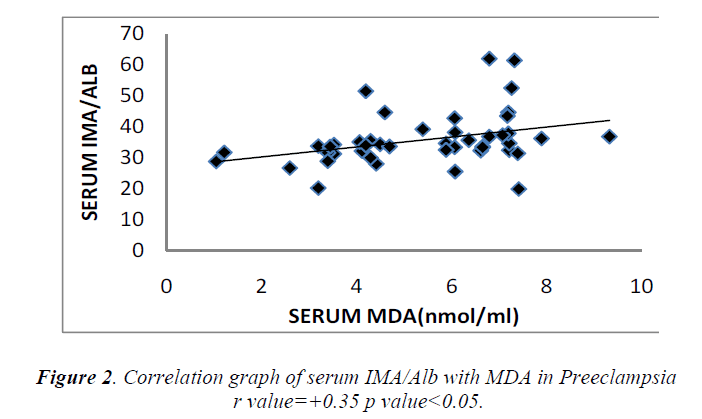 In conclusion IMA IMA normalized to albumin appears to be significantly increased in PE. This suggests that measurement of this oxidative biomarker may be useful in monitoring pregnancies with respect to the development of preeclampsia.

The contribution of participants who supported the study and the laboratory staff of SCB Medical College and Hospital Cuttack Odisha are duly acknowledged.