Conclusion: The high expression of MAP2K6 was associated with radio resistance in human NPC CNE cells. MAP2K6 may a potential biomarker of NPC radio sensitivity. Further research was required.

Nasopharyngeal carcinoma (NPC) is an Epstein-Barr virusassociated epithelial malignancy, with unusual disparity in ethnic and geographical distributions [1]. NPC is a typical regional disease, and most of patients with NPC appeared in South China and Southeast Asia areas [2]. The incidence ranges from 30% ten thousand to 50% ten thousand [3]. The incidence and morality of NPC ranked first around the world. NPC has become an important public health issue in these areas. NPC has high malignant degree, and prone to have lymph node metastasis and distant metastasis without obvious symptoms at early stage. Patients have been in the middle and late stage when being confirmed [4]. The radiotherapy is the primary treatment method. In recent decades, the application of intensity modulated radiation therapy improved the curative effect of radiotherapy for NPC with the great development of radio technology and involvement of electronic computer [5]. Most patients can benefit a lot from the radiotherapy. It was reported that the five-year survival rate of patients with I-IVB stage NPC was approximately 85% [6]. However, there were still some patients who cannot benefit from radiotherapy. The rates of local recurrence and distant metastasis were 8.2% and 20%, respectively [7]. The local recurrence and metastasis caused by radioresistance become a bottleneck of curative effect for patients with NPC [8,9]. As a complex heterogeneous group, the tumor has extensive information interaction with the surrounding environment [10-12]. Most tumor cells can form cell clusters (multicellular spheroids, MCS) under the condition of three-dimensional, its biological characteristics and the responses to the rays and cytotoxic drugs were significantly different from ordinary monolayer culture cells, but was close to cells in the body. Radiation therapy is one of the main treatment of nasopharyngeal carcinoma. The mitogen activated protein kinase (MAPK) includes extracellular regulated protein kinases, C-JUN Nterminal kinase, and p38 and ERK5 protein kinase. These proteins were important signal molecule. MAP3K6 was upstream kinase of p38 that was involved in cell proliferation, development and division. As a king of extracellular signalregulated kinase, MAP2K was the integration points of multiple biochemical signaling pathways. This study explored the influence of mitogen-activated protein kinase kinase 6 (MAP2K6) on nasopharyngeal carcinoma radiotherapy sensitivity and its possible mechanism.

Human CNE cells were from Cancer institute of Xiangya Hospital. Generally, we firstly used the sublethal radiation does in NPC CNE-2 line. Almost all NPC cells were killed after five days of irradiation at 12 Gy. Then we used a dose of 11 Gy for sublethal for selecting CNE2 radioresistant cells. The first generation of subclone cells was generated from the surviving fraction of the parental cells irradiated with the sublethal dose. We repeated this process until the fifth generation CNE cells was considered as the CNE2 cell radio resistant group.

Sample was sonicated three times on ice using a high intensity ultrasonic processor (Scientz) in lysis buffer (8 M urea, 2 mM EDTA, 10 mM DTT, 1% Phosphatase Inhibitor Cocktail and 1% Protease Inhibitor Cocktail). The remaining debris was removed by centrifugation at 20,000g at 4°C for 10 min. Finally, the protein was precipitated with cold 15% TCA for 2 h at -20°C. After centrifugation at 4°C for 10 min, the supernatant was discarded. The remaining precipitate was washed with cold acetone for three times. The protein was dissolved in buffer (8 M urea, 100 mM TEAB, and pH 8.0) and the protein concentration was determined with 2-D Quant kit according to the manufacturer’s instructions.

Examination of radio sensitivity and apoptosis

We used SPSS 14.0 to perform the statistical analyses. The continuous data was expressed by using mean ± standard deviation. We used t-test to compare the difference between groups. 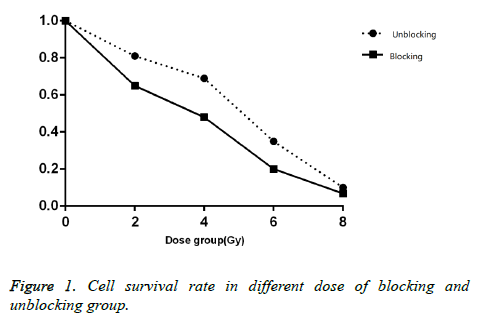 Previous study reported the proteins profiles based on the traditional Two-dimensional electrophoresis [13]. This method can usually identify about 1000 kinds of proteins, and conventional enzymolysis polypeptide based proteomics analysis method can identify about 3000-4000 protein, which only cover the 5-20% of the whole proteins and is far from meet the requirement of high flux quantitative protein expression spectrum analysis. In the current study, we compared to proteins profiles from NPC sensitivity cells and NPC resistant cells through high throughput proteomics and found that MAP2K6 significantly expressed in human NPC radio resistant cells, which aims to provide new clues to reveal the molecular mechanism underlying NPC radio resistance.

The mitogen activated protein kinase (MAPK) includes extracellular regulated protein kinases, C-JUN N-terminal kinase, and p38 and ERK5 protein kinase. These proteins were important signal molecule. MAP3K6 was upstream kinase of p38 that was involved in cell proliferation, development and division. As a king of extracellular signal-regulated kinase, MAP2K was the integration points of multiple biochemical signaling pathways [14,15]. Under the effect of inflammatory cytokines and environmental stress, the MAP2K6 can encode proteins that exert phosphorylation and activation for p38MAPK mediated signal transduction pathways, including the suspension of cell cycle caused by environmental stress, transcriptional activation and apoptosis, and other intracellular reactions [16]. It was reported that 20% of mutations from promote the split the original activated protein kinase signaling pathways were associated with human tumors, and MAP2K6 plays an important role in human ovarian cancer metastasis [17,18]. It was reported that expression quantity of MAP2K6 in prostate cancer and esophagus, stomach and large intestine cancer were significantly raised compared with normal tissues [19]. We compared the expression of MAP2K6 in NPC cell radio sensitivity and resistance group. The expression of MAP2K6 in resistance group was significantly higher than that in the radio sensitivity group. We also compared the expression level of MAP2K6 in different dose level and found that the expression level of MAP2K6 increased by elevation of irradiation. We further test the results by inhibiting expression of MAP2K6 in two cells group. 2Gy irradiation was given to radio sensitivity and resistance groups. The cell survival rate of blocking group was significantly higher than that in the unblocking. This result proved that significant relation existed between expression of MAP2K6 and radio resistance. Our results indicated that expression of MAP2K6 can increase radio resistance of NPC CNE cells, and may could be a treatment target in NPC radiotherapy.

In conclusion, the high expression of MAP2K6 was associated with radio resistance in human NPC CNE cells. MAP2K6 may a potential biomarker of NPC radio sensitivity. The present study was limited in cell lines, and further research was required.