Role of BMI and Venous Resistance in Modulation of Cardiac Filling.

Objective: Through our experiment studying the effect of supine exercise on conduit veins, we attempt to investigate the physiology of venous return, cardiac filling, and its relationship to BMI.

Subjects: Adult subjects free of cardiovascular disease, and without a history of abdominal surgery that might interfere with CT scan measurements of IVC size and no contraindications to performing near-maximal levels of exercise. Interventions: we studied 14 healthy subjects at supine rest, legs elevated and incremental levels of supine exercise. We calculated an index of venous resistance (VR), and measured aortic and IVC cross-sectional areas (CSA), transmitral filling parameters, and IVC ellipticity. The participants were dichotomized based on BMI: normal BMI ≤ 25 (n=6) and elevated BMI >25 (n=8).

Conclusion: VR and ellipticity are higher; and IVC CSA is lower in the elevated BMI group. This study points to a negative effect of increasing BMI on cardiac filling due to diminutive IVC remodeling and extramural compression.

The function of the venous system in influencing venous return and cardiac output has not been studied extensively since Guyton’s original experiments, especially in alert conscious humans [1-3]. This has resulted in difficulty in translating veno–cardiac interactions to bedside clinical care. According to Arthur Guyton venous resistance is 19 fold more important for cardiac output than arterial resistance. In clinical settings where patients have increased intra-abdominal pressure (e.g., acute pancreatitis) or have significant abdominal obesity, major effects on venous resistance and cardiac output may occur.

Cardiac filling and the various factors influencing it have been an area of great interest to physiologists since Starling presented the famous Linacre lecture a century ago [4]. These factors are believed to play an important role in the etiology of diastolic dysfunction. Body mass index (BMI) in the obese and in the overweight range has been shown to be consistently linked to an increased risk of diastolic dysfunction [5-12].

We hypothesize a venoconstrictor remodeling effect on the IVC in overweight, sedentary individuals that reduces the reserve capacity needed to modulate venous resistance (VR) during periods of increased cardiac output.

IRB approval was obtained from the medical university, in which the study was conducted. Informed consent was obtained from young healthy volunteers (n=14, ages 21-41 y). Subjects were free of any known cardiovascular disease and had no history of abdominal surgery that could interfere with computerized tomographic scan measurements of IVC [13]. Also, subjects had no contraindications to performing near-maximal levels of exercise.

Exercise was performed by all subjects using an exercise cycle ergometer specifically designed for supine exercise (Biodex Medical Systems, New York). This device was mounted over the computerized tomographic imaging bed. The bicycle ergometer had an adjustable resistance to increase workload. The exercise was performed in 3-minute stages to achieve steady state during exercise [14]. Subjects were rapidly titrated to maximum workload by maintaining a constant pedaling rate of 60 revolutions per minute. The resistance was increased to a point where the patient could no longer pedal; this was defined as 100% or maximal exercise. Two levels of exercise were performed by each subject. The first was at 50% of maximal exercise and the second at 90% [15,16].

Transthoracic mitral inflow Doppler measurements were performed at baseline and immediately after each level of incremental exercise. These measurements were taken within 2-3 minutes after cessation of exercise. The parameters recorded were: peak velocity of early filling (E), peak velocity of late filling (A), E/A velocity ratio, and E wave velocity time integral (EVTI). Tracings of three consecutive cardiac cycles were analyzed and average velocities were calculated.

After subjects consented, they were asked to lie on the CT imaging table. The subjects rested for 10-15 minutes in dim lighting then baseline hemodynamic readings were recorded. CT images were then obtained followed by mitral inflow recording as outlined earlier. After a rest period of three minutes, the subject’s legs were then elevated passively utilizing stirrups. Hemodynamic, CT images and echocardiographic readings were recorded. The subject’s legs were then brought down to the supine position and following a rest period of three minutes, identical measurements were again recorded. The measurement protocol was similarly repeated immediately after the cessation of both 50% and 90% maximal exercise using the supine bicycle ergometer. After the study, the subjects were taken from the radiology suite and lines were removed and adequate hemostasis was ensured.

All statistical analyses were performed using SAS 9.2 systems package. Statistical significance was accepted at an alpha level of 0.05 unless otherwise noted. Descriptive statistics were calculated for all variables for each condition measured. A mixed model repeated measures ANOVA was performed to examine differences in cardiac related variables. Differences within each BMI group across conditions, as well as differences between BMI groups within conditions, were examined with condition and BMI group considered fixed effects and subject considered a random effect. Post-hoc comparisons were performed by controlling the overall alpha level using a Bonferroni adjustment for comparisons of interest. The Bonferroni-adjusted alpha levels used to assess significance for the post-hoc comparisons were 0.0014 for VR and ellipticity and 0.0042 for the other variables.

The comparison of VR at each intervention between the aforementioned groups is shown in Figure 1. There was a significant group effect of BMI on the VR between the two groups 1.15 ± 0.14 cm H2O.min/L vs. 0.55 ± 0.15 cm H2O.min/L (p=0.011). The VR of the elevated BMI group was consistently higher than the normal BMI group at all interventions with the greatest difference appearing at baseline. This gap was greatly diminished when the subject’s legs were passively elevated. When the subject was placed back into supine position, it was noted that VR did not return to baseline levels. With 50% and 90% maximal exercise, the VR increased slightly only in the elevated BMI group, but remained much lower than at baseline (Figure 1).

Figure 2. Mean ellipticity between elevated and normal BMI groups at all interventions. *p<0.006. The elevated BMI group only loses ellipticity when CVP becomes elevated during legs elevated maneuver or when overall intravascular pressures are elevated with maximal exercise. The P-value for the group effect is p=0.032. 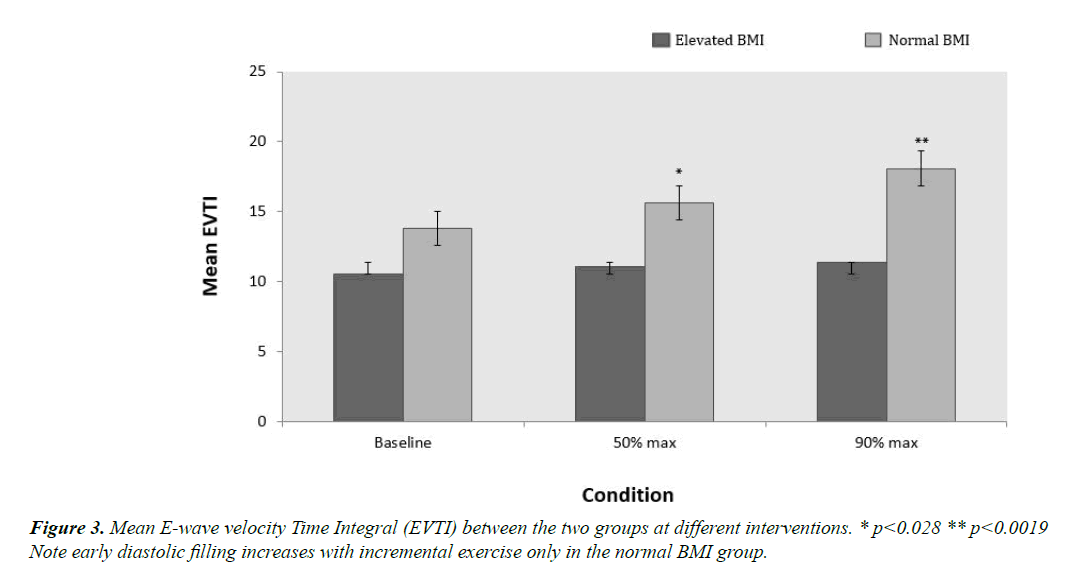 Our findings indicate that higher BMI is associated with increased IVC resistance, higher ellipticity, reduced circumferential area and lower E/A ratio suggesting that increasing BMI has deleterious effect on cardiac filling due to IVC remodeling and extramural compression. Specifically, the study highlights the fact that minor increases in BMI greater than 25, can have significant measurable effects on venous resistance. The ability to mobilize cardiac output with exercise appears to be reduced. This proof of concept study creates the model and methodology for assessing in the future the role of obesity in limiting exercise cardiac output. It also provides a model to assess possible IVC remodeling as part of the training effect, to reduce venous resistance in endurance athletes.

Effect of BMI on venous resistance

From Figure 1, we note a significantly higher VR in the elevated BMI group when compared to the normal BMI group. This difference also parallels IVC morphologies changes due to external compression. The concept of VR and its effect on cardiac filling is crucial to our understanding of how cardiac output is regulated under various physiologic conditions [1,2]. According to the Poiseulle equation (see appendix) the changes in resistance in the IVC are primarily modulated by changes in vessel radius. The resistance in the large veins such as the IVC becomes important in determining preload and cardiac filling because of their function as the most proximal conduit of blood returning to the heart [3,21,22].

We evaluated the dynamics of the venous system through maneuvers such as passive leg raising and varying intensities of exercise. An acute drop in VR was noted in the elevated BMI group with passive leg raising. With this maneuver, a concurrent significant rise in CVP was also noted in this group, suggesting that this increase in intramural pressure may be the mechanism for the drop in VR. In contrast to the elevated BMI group, the normal BMI group tended to have a constant low VR throughout all interventions. This is likely due to the larger IVC sizes seen in this group allowing for increased venous conductance reserve. We also noticed that the normal BMI individuals in our study were very athletic. This is in agreement with the findings of several authors who have reported an increased IVC CSA in endurance athletes with improved venous function with exercise [13,23,24]. Unfortunately, we did not attempt to quantify cardiovascular fitness in the present study.

Unlike the normal BMI group where the VR was fairly constant, the elevated BMI group had a steady rise in VR in response to exercise. This reflects a smaller baseline IVC size with decreased dilatory reserve. The elevated BMI individuals necessitate higher intramural pressures to support the increasing blood flow through the smaller IVC during supine exercise.

The significant differences in morphology between the elevated and normal BMI individuals and its relation to hemodynamics are well explained by the Moreno concept [27,28]. Our observations suggest that the elevated BMI group operates on the vertical portion of the Moreno curve at rest but transitions rapidly to the horizontal portion of the curve during exercise. This changing morphology from elliptical to spherical is presumably due to the increased transmural pressures caused by compression. On the other hand, the normal BMI group maintains a constant mildly elliptical cross sectional area through rest and various interventions. This ability to accommodate increased blood flow without an increase in sphericity is due to lack of external compression and conduit vein dilatory remodeling.

Several authors studying the morphology and hemodynamics of the venous system describe a picture of veins with highly elliptical cross sections which become spherical when intramural pressures are increased [28] However, many fail to clarify that this model of ellipticity does not represent all individuals with varying body habitus.

One of the limitations of our study is that we measured echocardiographic and computerized tomographic scan measurements immediately after the cessation of exercise (within 60 to 90 seconds) rather than during exercise. This may hypothetically result in attenuation of actual changes in the inferior vena cava dimensions and mitral inflow characteristics, which may have affected our results. We chose to measure these parameters immediately after cessation of exercise because of technical difficulty in measuring mitral inflow velocities while the subject is actively exercising. Supine exercise also relates to a relatively small segment of human exercise spectrum. The technical problems associated with performing exercise in the erect position is the interference and compensation for the effect of gravitational forces on cardiac output, central conduit vein morphology, and the circulatory system in general. Such an interrogation would require different techniques. Nevertheless, our protocol proved suitable to detect exercise induced functional changes in conduit veins and to assess their impact on cardiovascular function. Another possible limitation is that the results could be from underlying differences in blood pressure and not obesity per se. Blood pressure is an arterial phenomenon which affects venous hemodynamics only by degree of sympathetic activation. There is relatively sparse central venous sympathetic innervation, which limits venous constriction in the central veins. We found a minor increase in abdominal aortic cross-section with increasing blood pressure, demonstrating that our methodology was sensitive to the arterial stretch effects of the increase in blood pressure. For these reasons, we do not believe differences in blood pressure, contributed to our IVC morphology and hemodynamic data.

Increasing BMI is accompanied by increased venous resistance and reduced ellipticity of IVC together with early signs of attenuated cardiac filling. This work confirms the important role of conduit vein physiology as link between body habitus and cardiac filling. Weight control may hold promise in interrupting this pathway to deterioration of heart function.