Results: Among 313 eligible women, 223 (71.2%) were mild ICP and 90 (28.8%) were severe ICP. By multivariate regression logistic analysis, Total Bile Acid (TBA) and twin pregnancy were the risk factors for adverse fetal outcomes among patients (p=0.001 and p<0.001, respectively). Receiver operating characteristic curve analysis revealed that the level TBA could be used as a predictor of adverse fetal outcomes with a 59.7% sensitivity and a 56.3% specificity when the cut-off value was 24.1 μmol/L at the time of diagnosis of ICP.

Intrahepatic Cholestasis of Pregnancy (ICP) is a medical condition in which severe pruritus associates with elevated liver function tests, affecting 0.7%-5% of all pregnancies [1]. In Europe, the prevalence is 0.5% to 1.5%, and in China, the incidence is 2.3% to 6.0% [2,3]. Pruritus typically occurs in the late pregnancy and gets worse at night and predominantly affects the palms and soles. Skin changes are limited to excoriations due to scratching. Jaundice is not a common symptom in these patients. These symptoms and biochemical abnormalities are spontaneously relieved rapidly after delivery, but may recur in subsequent pregnancies [4]. The treatment of ICP is mainly symptomatic. Ursodeoxycholic acid is widely used and data suggests that treatment can reduce pruritus and lower TBA levels [5].

All the time, ICP is thought to be a relatively benign condition in pregnant women. However, a recent large Swedish study on more than 11,000 patients showed that the risk of later hepatobiliary cancer and immune-mediated and cardiovascular diseases is higher in women with ICP than in women without ICP [6]. Furthermore, ICP can lead to placental insufficiency like gestational diabetes, pre-eclampsia [7]. Most importantly, it is associated with potential adverse fetal outcomes, including premature delivery, stillbirth, neonatal death, intrauterine growth restriction, Apgar score<7 at 5 min, meconium-stained amniotic fluid, neonatal unit admission [8,9]. The etiology and pathogenesis of ICP is complicated and remains unclear. Genetic, hormonal, and environmental factors presumably play important roles in this disease [4,10,11]. The mechanisms by which fetal complications occur are also unclear, and previous studies have not been consistent with predictors of adverse fetal outcomes. Therefore, this study investigated the associations between clinical factors and adverse fetal outcomes, to find the risk factors for adverse fetal outcomes.

The present retrospective cohort study was carried out in the First Affiliated Hospital of Anhui Medical University, China. The study was approved by the Ethics Committee of the Center due to the retrospective nature of the study. The informed consent was waived.

The data included 313 women with ICP who received obstetric care and delivered in this hospital from January 2014 to December 2015. Patients with a diagnosis of ICP were included development of persistent pruritus otherwise unexplained during the second or third trimester of pregnancy, fasting total bile acids (TBA) ≥ 10 μmol/L and/or abnormal liver function. While patients with viral or autoimmune hepatitis or other possible cause of liver function impairment were excluded. Regular monitoring and treatment were performed from the time of diagnosis until delivery, all women received drug therapy.

The adverse fetal outcomes assessed were premature delivery (delivery gestational age<37 weeks), stillbirth, neonatal death (0-27 d after delivery), intrauterine growth restriction (which was defined as birth weight below the 10th percentile for its gestation and gender following the hospital guidelines), Apgar score<7 at 5 min, meconium-stained amniotic fluid and neonatal unit admission. Patients without these criteria were included in the A group and the others were included in the B group. According to the basis of TBA level, patients were further divided into mild (10 μmol/L ≤ TBA<40 μmol/L) and severe (TBA ≥ 40 μmol/L). The prenatal outcomes and clinical records were measured at the time of diagnosis.

Statistical analysis was performed using SPSS17.0 software (SPSS, Chicago, IL). A two-tailed t-test and Chi-square test were used to compare the clinical characteristics between the groups. Independent risk factors for adverse fetal outcomes were analyzed and identified by univariate and multivariate logistic regression analyses. Relative risk with the 95% confidence interval was also calculated. A p-value<0.05 was considered statistically significant. Receiver operating characteristic (ROC) curve was used to determine the cut-off value of TBA for predicting AFOs.

Table 1. The demographic and biochemical characteristics between group A and group B.

In Table 1, serum TBA level was significantly higher among ICP patients with AFO than among those without it (p=0.002). When using a Receiver Operating Characteristic (ROC) curve analysis, the level of TBA ≥ 24.1 mmol/L at the time of diagnosis of ICP and could be used as a predictor of adverse fetal outcomes with sensitivity and specificity was 59.7% and 56.3%, respectively (Figure 1). 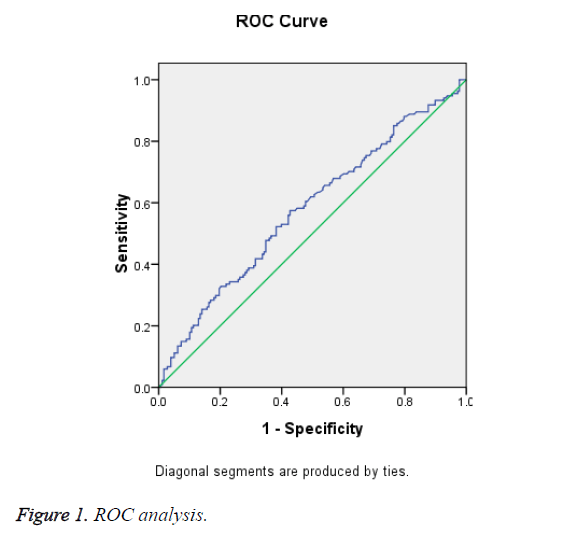 The associations between perinatal complications and ICP have been extensively studied. In our study, 4.44% of deliveries were among women with ICP. Previous research revealed that ICP frequently recurred in multiparous women and was common in multiple gestations [12-14]. In the present study, we also found that among women with ICP, especially those with adverse fetal outcomes were the twin and multiparous.

ICP is a pregnancy complication with a relatively mild maternal symptomatology, but it is associated with a high risk of adverse fetal adverse especially preterm birth, fetal hypoxia and stillbirth [15]. A recent retrospective study analyzed the outcome of 215 women with ICP that was classified as mild, moderate, and severe according to the bile acid level. Spontaneous preterm birth (19.0%) and perinatal death (9.5%) occurred significantly more often in cases with severe ICP [16]. Preterm delivery, including spontaneous and iatrogenic preterm deliveries, was the most common complication. A significant increase in the number of preterm delivery was detected in other study [17]. Our report hints that the gestational age of delivery was significantly earlier, especially in the group with adverse fetal outcomes and in the severe ICP group. In accordance with the literature, an increased rate of preterm delivery (33.9%, 106/313) was detected in our study.

Stillbirth is the most feared complication of ICP and the risk is difficult to estimate. A recent study confirmed the increased risk of stillbirth at least in severe ICP, defined as total bile acids>40 mmol/l, and also other fetal complications increased with increasing serum bile acid levels [17]. When we evaluated ICP according to stillbirth, it was relatively high at 15% in old studies and 3.5% in more recent studies [18]. Another study conducted by Turunen et al., stillbirth incidence was found to be 1.2%, in our study, 11 cases stillbirth are observed, the incidence is about 3.5% [19]. In the same study, ICP was deemed to increase the rates of induction of delivery and cesarean section, and in our study, the rate of cesarean section was 80.8%. When considering ICP is not a sign of cesarean section, we can further conclude that this increase is mainly due to repeated cesarean section.

The finding that patients with adverse fetal outcomes had higher TBA level than those controls indicated that the increased TBA level observed in ICP correlates with poorer fetal outcomes. Many studies have confirmed a significant positive correlation between adverse fetal outcomes (including preterm delivery, meconium-stained amniotic fluid, and intrauterine fetal demise) and maternal total bile acid levels exceeding 40 mmol/L [17,20,21]. So, TBA levels not only are important biomarkers for the diagnosis of ICP, but also they are useful for the clinical grading of ICP [22].

The underlying mechanisms associated with adverse fetal outcomes in ICP are not well understood in detail. The placenta has an important role in protecting the foetus from potentially toxic endogenous substances such as TBA [23]. However, if the level of TBA in the maternal circulation increases, this enhances placental transport, promotes placental hormone production, and causes vasoconstriction of the chorion [24]. Therefore, high levels of total bile acids and their toxic metabolites are suspected to be associated with poor prognosis [20,25,26].

This present retrospective research has several limitations. First, the length of the study period may affect the outcomes, but the diagnosis of the year, including as a variable, in multivariate analysis to control the potential differences associated with this factor. Additionally, the number of patients was small, which could have been a confounding factor. However, these problems could be overcome in future multicenter studies.

The authors thank the patients who agreed to provide medical records for clinical research and statistics. We also thank the experts who provided statistical analysis aid and advice. Finally, we also appreciate all the colleagues who participated in the study.

The authors have no support or funding to report.