Malignant Fibrous Histiocytoma (MFH) is the most common type of soft tissue sarcoma of mesenchymal origin in adults, which mainly occurs in the extremities (68%), trunk (16%) and retroperitoneum (16%), but rarely arises in the chest wall. Here, we reported a 23 y old male patient diagnosed with retroperitoneal giant cell-type malignant fibrous histiocytoma. On physical examination, tenderness was found at the left lower abdomen and periumbilical abdominal. Laboratory assessments showed that the levels of Alpha Fetoprotein (AFP), Carcinoembryonicantigen (CEA) and Carbohydrate Antigen 199 (CA199) were normal. Blood routine examination and chest CT scan were also normal. Abdominal CT scan showed there was a peritoneal huge solid mass with irregular and unaverage density shadow, which was upper to liver and downward to pelvic cavity. Enhanced CT scan revealed a ring-enhancement in solid mass. Immunohistochemical assays revealed that MFH was derived from giant cell. Positive staining of AAT, CD68, vimentin, Ki-67 and negative staining of CK were observed in the tumor tissues. Although the patient didn’t receive radiotherapy and chemotherapy, he was still alive 33 month after surgery.

Malignant Fibrous Histiocytoma (MFH) is the most frequent soft tissue sarcoma, which is commonly found in the extremities, trunk and retroperitoneal region [1]. MFH is mainly found in adulthood and typically in the ages between fifty and seventy, which presents a high propensity for recurrence and metastasis [2,3].

In this report, we described clinical, pathological findings and successful treatment of a 23 y old patients with retroperitoneal giant cell-type MFH.

A 23 y old man complaining of swelling, nausea and vomiting after drinking for three days was referred to our department in the March of 2012. The patient had no history of stomachache, diarrhea, fever, weakness or weight-loss. He has visited another hospital and the abdominal CT scan revealed a giant tumorous lesion in the retroperitoneal region. Abdominal puncture biopsy guided by B-ultrasound has been performed and the 10 ml coffee-like liquid was obtained. However, the pathologic diagnosis was still unclear. Then, the patient was transferred to our hospital. On physical examination, tenderness was found at the left lower abdomen and periumbilical abdominal, but rebound pain and abnormal bowel sounds were not found. Laboratory assessments showed that the levels of Alpha Fetoprotein (AFP), Carcinoembryonicantigen (CEA) and Carbohydrate Antigen 199 (CA199) were normal. Blood routine examination and chest CT scan were also normal. Abdominal CT scan showed there was a peritoneal huge solid mass with irregular and unaverage density shadow, which was upper to liver and downward to pelvic cavity (Figures 1A-1C). Enhanced CT scan revealed a ring-enhancement in solid mass (Figure 1D). Then, surgery resection was performed. In the operation, a free huge yellow solid mass with clearly border in retroperitoneum was observed and removed. There were no metastatic nodules in liver, omentum, abdominal or pelvic. The pathological diagnosis showed that a giant cell-type malignant fibrous histiocytoma with size of 30 × 30 × 20 cm. Microscopically, the different degrees of differentiation of atypical pleomorphic giant cells and polygonal tumor cells were obvious. (Figure 2A) Immunohistochemistry showed that in the formalin fixed tumor tissues, the staining of AAT and CD68 was positive and the staining of CK was negative (Figures 2B-2D) Also, positive expression of Ki-67 and vimentin was found. 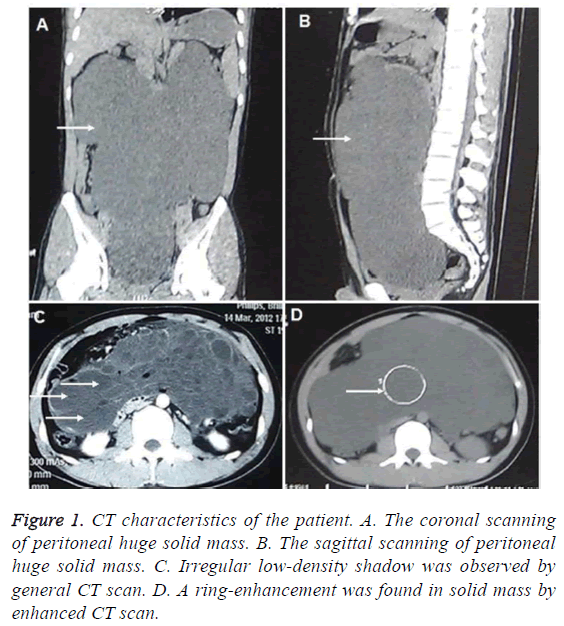 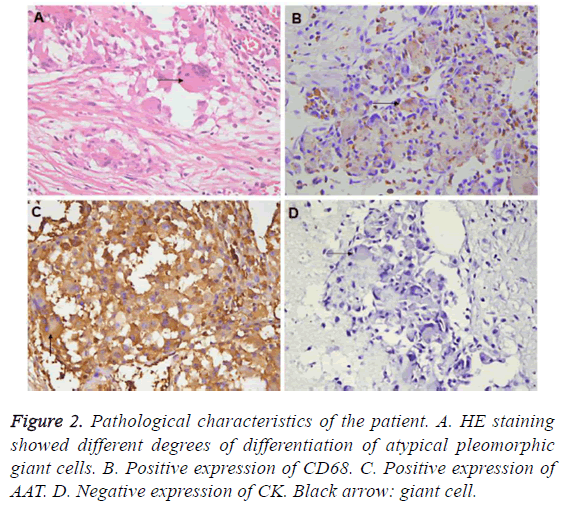 The patient didn’t receive any chemotherapy or radiotherapy after surgery. He was followed up for 33 months after surgery, and no evidence of local recurrence or metastasis was observed (Figure 3). 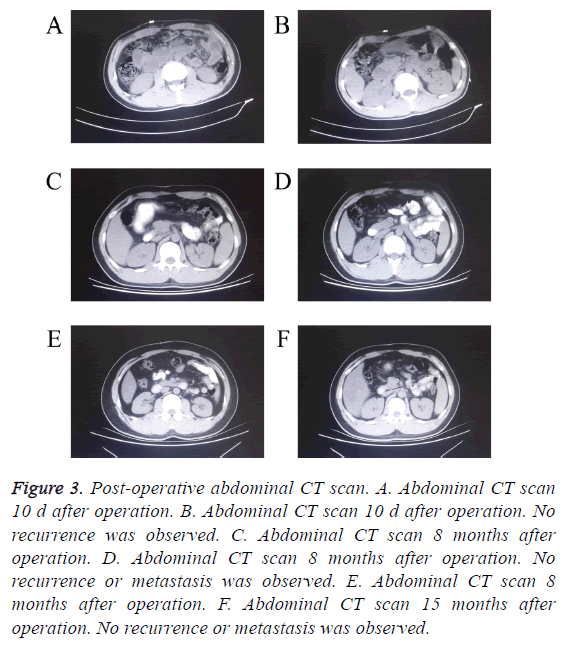 MFH is the most frequent soft tissue sarcoma accounting for 10% of all soft tissue sarcomas, which mainly occurrences in the extremities (68%), trunk (16%) and retroperitoneum (16%), but rarely arises in the chest wall [9]. MFH is prevalent in those older than 50 y, while it is rare in those under the age of 40 [10]. Here, we reported a case of MFH derived from giant cells in retroperitoneal space in a young adult aged 23 y old. Microscopically, MFH is consist of spindle shaped fibroblasts and histiocytes with atypical pleomorphic giant cells with different proportions [11]. MFH tumors are classified into five histologic subtypes: storiform-pleomorphic, myxoid, giant cell, inflammatory and angiomatoid [12,13]. The giant cell, inflammatory and angiomatoid subtypes are generally regarded as the characters of the low-grade sarcomas, while pleomorphic storiform and myxoid subtypes are generally considered as the characters of the high-grade sarcomas [14].

The patients with MFH are always present with nonspecific symptoms, which are reported to be non-painful mass, painful mass or pain without mass [15]. Although Magnetic Resonance Imaging (MRI) and Computed Tomography (CT) are widely used methods to measure the characteristics of these tumors, the imaging characteristics are still considered to be nonspecific [16]. Therefore the preoperative diagnosis on MFH is very difficult. Immunohistochemical staining is considered to be a potential diagnostic method. In recent report, CD68 and vimentin are confirmed to be effective marker for MFH diagnosis [3].

MFHs have a high rate of local recurrence and metastasis [17]. Local recurrence often occurs in 2 y and correlates with tumor location, size, positive resection margins and histological features [18]. Riad et al. reported the occurrence rate of radiation induced soft tissue sarcoma was ranged from 17 to 46%, and the rate of local recurrence was ranged from 26-65% among 42 patients [19]. The prognosis of MFHs is poor. The overall 2 y survival rate is approximately 60%, while the overall 5 y survival rate is less than 20% [17,18]. Surgery resection is considered as the best way in treating MFH, and the radical resection can significantly decrease the incidence of local recurrence [4]. In addition, radiotherapy and chemotherapy were reported to be beneficial for the prognosis of the patients with MFH. Issakov et al. [20] reported that patients with high grade MFH, who underwent surgery section followed by radiation, received a 10 y relapse-free survival of 62% and an overall survival rate of 80%. Shioya et al. [17] reported that a patient with MFH received four-year survival with treatment of both surgery and chemotherapy. However, the criterion of adjuvant chemotherapy and radiotherapy has not been established.

In our case, the patient with retroperitoneal giant cell-type malignant fibrous histiocytoma received only surgery resection without radiotherapy and chemotherapy. This patient was followed up for 33 months after surgery. No evidence of local recurrence and metastasis was observed.