Introduction: Intermediate Uveitis (IU) is a form of uveitis that may be caused by infectious and noninfectious diseases. Infections like TB, syphilis and leprosy and systemic diseases like MS and sarcoidosis may be associated with intermediate uveitis. Case report: Male patient aged 17 years old presented with loss of vision in the right eye on examination organized vitreous hemorrhage was detected and the patient denied any history of trauma. During PPV lower pre-retinal fibrovascular mass resembling retinal vaso-proliferative tumor was observed with adjacent sclerosed retinal vessels denoting retinal vasculitis. Examination of the left eye revealed lower retinal vasculitis that was confirmed by fundus fluorescein angiography. Investigations to exclude infections and other causes of retinal vasculitis were done and were completely negative. As the patient complained of previous attacks of headache and tingling neurological consultation was done that revealed the diagnosis of MS and was confirmed by MRI. Conclusion: MS is a rare cause of intermediate uveitis that may lead to retinal vasculitis and retinal vaso-proliferative tumor. Ophthalmologists should consider MS as a rare cause of unexplained vitreous hemorrhage in young patients.

Intermediate Uveitis is a form of chronic uveitis that mainly affects the vitreous especially the anterior vitreous, the pars plana and the peripheral retina. It mostly affects patients below 40 years of age. The prevalence of intermediate uveitis with respect to the total number of uveitis patients has been reported in multiple studies. Values ranging from 8% to 22% have been reported to intermediate uveitis [1,2].

Some studies reported the frequency of uveitis in MS between 0.65% and 36.7% [6]. The association is still a debate as the uvea has no myelin sheath but both have common embryonic neuroectodermal origin and association of HLA DR 15. Other retinal findings have been detected in MS patients like retinal vasculitis that ranged from 10% to 35% and retinal neovascularisation but the latter was uncommon [7].

The patient underwent 23 gauge pars plana vitrectomy in the right eye, during vitrectomy, core vitrectomy, and removal of the vitreous hemorrhage was done, unexpectedly lower preretinal fibrovascular mass (retinal vaso-proliferative tumor) with surrounding localized retinal detachment was detected attached to the lower part of the retina with adjacent sheathed retinal vessels denoting retinal vasculitis (Figure 1). Shaving of the vitreous base then shaving of the pre-retinal mass with the cutter was done. The surgery ended by air-fluid exchange and 360 endo-laser barrage.

Postoperatively the BCVA in the right eye improved to 0.8, fundus fluorescein angiography for both eyes revealed lower retinal vasculitis in the left eye (Figure 2), urgent selective argon laser photocoagulation to the lower part of the retina of the left eye was done, investigations were done including CBC, CRP, ESR that were within normal range, other investigations to exclude TB infection like tuberculin test and investigations for causes of retinal vasculitis like Behcet disease, sarcoidosis, and SLE were done including HLA B51, ACE, ANA, ANCA and were completely normal. As the patient complained of recurrent attacks of headache neurological consultation and MRI was done that revealed MS with its characteristic periventricular plaques (Figure 3). The patient showed no other manifestations of multiple sclerosis. 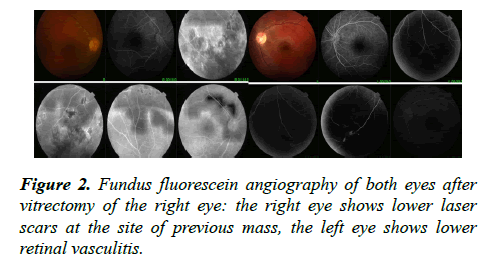 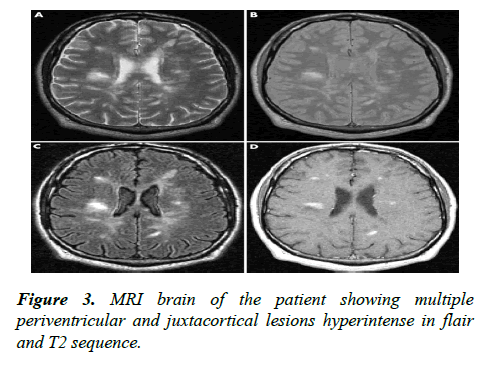 Intermediate uveitis is a type of intraocular inflammation in which the affected eye is frequently white and quiet, on the other hand, multiple vision-threatening complications can occur in this condition because of its chronic nature and its frequent need for prolonged periods of steroid treatment.

The prognosis of intermediate uveitis is most favorable in the absence of complications [7]; however, the presence of retinal vasculitis increases the possibility of developing CME with subsequent visual loss. Retinal vasculitis results in areas of retinal ischemia. Macular ischemia increases the risk of visual loss by 4.4 folds, and ischemia ≥ 2 quadrants raise risks of neovascularization [8]. Also, periphlebitis raises the possibility of new relapsing events in the following 2 years [7].

The prevalence of retinal vasculitis in MS is about 9-23%, the veins are mostly affected in MS. There are few cases in which MS presents only with retinal vasculitis without evidence of uveitis or optic neuritis [8]. This was nearly similar to our patient.

Another recent study that was done in Egypt reported the patterns of intermediate uveitis in Egyptian patients. Peripheral retinal vasculitis was detected in 28.87% of the study's eyes. In this study, multiple sclerosis was reported in 9% of all patients [9]. This is coincident with other studies that support the association between multiple sclerosis and intermediate uveitis [10-13].

In this patient with intermediate uveitis, causes other than MS were ruled out like Behcet disease, sarcoidosis, investigations for other causes of retinal vasculitis like SLE, TB, and syphilis were done but the results were negative.

As regarding the treatment approach, some studies have reported the efficacy of interferon-beta in slowing down the course of intermediate uveitis related to MS [14,15]. According to our patient, the patient presented with vitreous hemorrhage that necessitates vitrectomy to clear vitreous opacity, to our knowledge this is the first case to present with intermediate uveitis on top of MS that presented with vitreous hemorrhage and retinal vaso-proliferative tumor that changed the line of treatment and needed vitrectomy without optic nerve affection.

To conclude this is a case of intermediate uveitis with retinal vasculitis that presented with retinal vaso-proliferative tumor with subsequent vitreous hemorrhage. This case signifies that ophthalmologists should suspect the presence of systemic diseases such as MS when facing a patient with uveitis as early diagnosis, treatment and follow up play an important role in prognosis.

The author certifies that he has no conflict of interest with any organization and no financial interest in the subject material of this manuscript.

The procedure was done under the regulations of the ethical committee of Tanta University which is inconsistent with the 1964 Helsinki declaration and its ethical standards. Informed written consent was obtained from the patient and his father (legal guardian) to publish the images and the findings that belong to the patient. 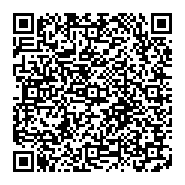