#These authors contributed equally for this work

Aim: This study is to investigate the effects of mechanical ventilation in the treatment of pleural effusion caused by multiple rib fractures.

Methods: A total of 44 patients with pleural effusion caused by multiple rib fractures admitted to our hospital from January 2013 to 2015 January were randomly divided into two groups, Com group (routine medical treatment group) and Mon group (mechanical ventilation group), with 22 cases in each group. Patients in Com group were given conventional medical treatment and those in Mon group were given conventional medical therapy combined with mechanical ventilation. Chest computed tomography (CT) and chest three-dimensional reconstruction (VRT) were performed at admission, the second day, the fourth day and the sixth day after admission. The activity of lactate dehydrogenase was detected by colorimetric method.

Chest trauma is the most common injury in the emergency trauma and rib fractures is the most common trauma in chest trauma [1,2]. Rib fractures can also cause abdominal injury. Multiple fractures in multiple ribs are very severe chest injury, which are often associated with pulmonary contusion, pneumothorax, and hemorrhagic shock [3]. Severe rib fractures can cause paradoxical respiration and mediastinal swing, which has large effects on respiratory and circulatory system, result in acute respiratory distress syndrome (ARDS), and cause the death of patients [4]. Almost all the flail chest patients have lung contusion. In patients with chest trauma, there are respiratory secretions increase and intra alveolar hemorrhage. Chest pain caused by rib fracture makes the patients afraid to take a deep breath and cough, instead rapid shallow breathing [5,6]. If it is not treated timely, it is easy to cause ARDS or different degree of pulmonary atelectasis, pulmonary infection, and pleural effusion. It is reported that 64% of patients with multiple rib fractures without anatomical reset have long-term persistent chest pain and other sequel [7].

A total of 44 pleural effusion patients caused by multiple rib fractures admitted in hospital from January 2013 to January 2015 were enrolled in this study. Pleural effusion occurred in 44 cases, accounting for 68.7% of the total number of cases. In the 44 cases, 24 cases were males and 20 cases were females. The oldest age was 70 years old, the youngest age was 20 years old, and the average age is 45 years old. Two cases died from ARDS, accounting for 4.58% of numbers of pleural effusion cases. Prior written and informed consent were obtained from every patient and the study was approved by the ethics review board of Laiwu Hospital Affiliated to Taishan Medical University.

According to the principle of random voluntary choice for treatment, patients were divided into Com group (conventional medical treatment group) and Mon group (mechanical ventilation group), with 22 cases in each group. There were no significant differences in clinical data between the two groups (P>0.05). Patients in Com group were given conventional medical treatment and those in Mon group were given conventional medical therapy combined with mechanical ventilation. Chest CT and chest three-dimensional reconstruction (VRT) was performed at day 0, day 2, day 4 and day 6 of hospitalization. Scanning parameters: 120 kV, 220 mA, thickness 5 mm, pitch 1. CT value was used to show the performance of fracture healing. CT value=α × (μm-μw)/μw. Note: The factor μm stands for the absorption coefficient (m) of the material and the factor μw stands for the water absorption coefficient (W). The factor α is the indexing factor and its value is 1000.

The pleural effusion was collected under guidance of color Doppler ultrasound. The activity of lactate dehydrogenase was detected by colorimetric method.

Data was analyzed by SPSS 13.0 software. Normality and homogeneity of variance test were firstly performed. If the data was in normal distribution and homogeneity of variance, single factor analysis of variance was used for comparing data among different groups at the same time point, and, the Q test was used for comparing data from the same group at different time points. Otherwise, Dunnett's T3 test was performed. P<0.05 were considered to be statistically significant.

The general clinical manifestations were observed. Before treatment, the patients of each group all had different degrees of chest pain, and the pain got intensified with cough, deep breathing or body rotation. After treatment, the symptoms of chest pain and dyspnea in Mon group were milder than that in Com group.

To observe the fracture line, chest X-ray was performed. As shown in Figure 1, patients of each group had a clear fracture line when admitted to hospital. However, after treatment, the fracture lines gradually blurred for the Mon group compared with the Com group. 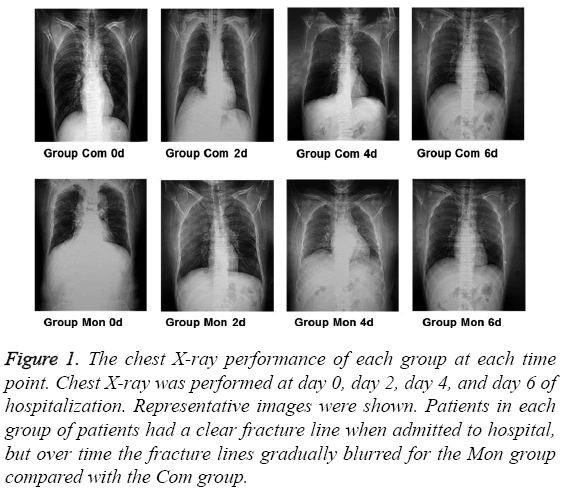 Figure 1: The chest X-ray performance of each group at each time point. Chest X-ray was performed at day 0, day 2, day 4, and day 6 of hospitalization. Representative images were shown. Patients in each group of patients had a clear fracture line when admitted to hospital, but over time the fracture lines gradually blurred for the Mon group compared with the Com group.

Table 1: The comparison of CT value of pleural effusion in each group at each time point (Hu, mean ± SD, n=22). 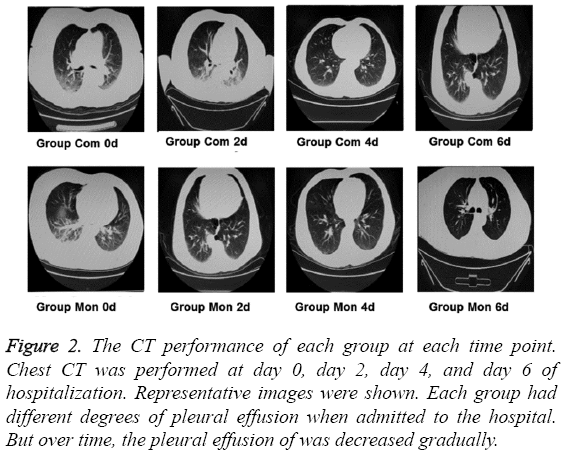 Figure 2: The CT performance of each group at each time point. Chest CT was performed at day 0, day 2, day 4, and day 6 of hospitalization. Representative images were shown. Each group had different degrees of pleural effusion when admitted to the hospital. But over time, the pleural effusion of was decreased gradually.

To further analyze fracture line, patients were examined with VRT. CT value was calculated. The patients of both groups were admitted to hospital with a clear fracture line (Figure 3). The CT value of the two groups was not statistically significant (P>0.05) (Table 2). But with the passage of time, the fracture line of the Mon group was gradually blurred, with callus formation. The CT value of the bone tissue gradually increased (P<0.05) and was more direct than the chest X-ray. There were significant differences between different groups and different time points (P<0.05). 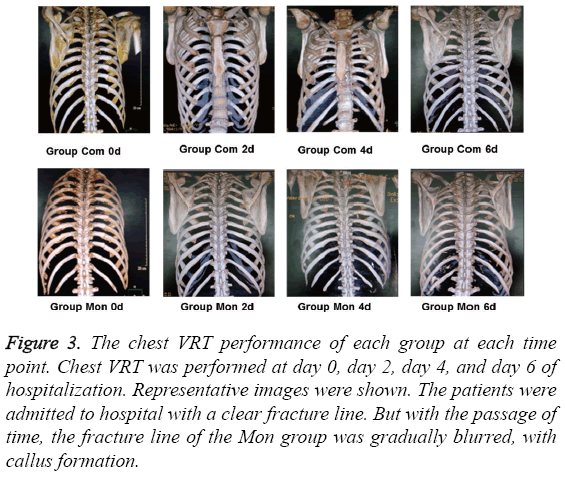 Figure 3: The chest VRT performance of each group at each time point. Chest VRT was performed at day 0, day 2, day 4, and day 6 of hospitalization. Representative images were shown. The patients were admitted to hospital with a clear fracture line. But with the passage of time, the fracture line of the Mon group was gradually blurred, with callus formation. 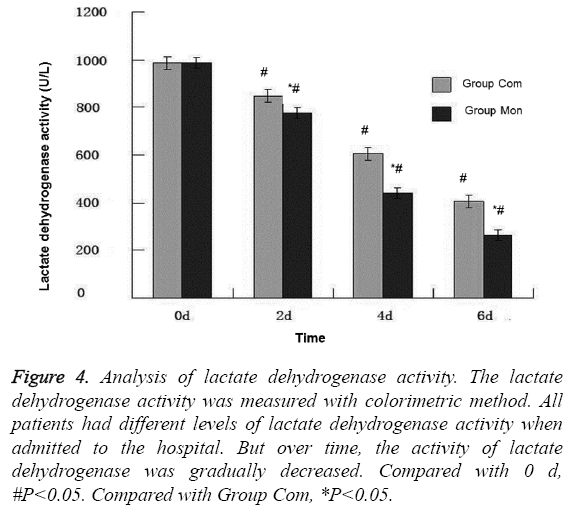 The incidence rate of rib fracture in closed thoracic trauma was 85%, and the common cause of injury was road traffic injury, falling injury, indirect crush injury, direct violence injury, etc. In clinical, there are types of single or multiple fractures of ribs and a plurality of multiple rib fractures. Flail chest is one special type, namely continuous 3 or more than 3 root ribs with multiple fractures [8]. According to statistics, the incidence of flail chest blunt trauma in the chest wall is in about 10%-15% and the total mortality rate is as high as 16%-20% [9]. Rib fracture is the main reason of the combined lung contusion and laceration, and liquid pneumothorax. If the treatment is not timely performed, it could cause chest pain, deformity and other complications [10].

There are mainly 3 conventional treatment methods for rib fracture. Firstly, the chest wall external fixation. Chest wall external fixation after rib fracture can reduce the chest injury and is an important part of subsequent treatment [11]. Chest wall external fixation is used for multiple rib fractures or flail chest and can reduce pain and correct abnormal breathing. After external fixation, there is significantly improvement for the respiratory function in patients and the chest deformity is not obvious. Therefore, it is very important to diagnose rib fractures. Chest X-ray is not good due to the poor location of ribs, often leading to the misdiagnosis or missed diagnosis of occult fractures [12]. Multi slice spiral CT has the advantages of larger range, thinner layer, higher resolution scanning and three-dimensional reconstruction, which can effectively solve the problem of rib fracture in X-ray diagnosis of rib [13]. This study shows that each group had different degree of fracture line when the patients just admitted. With the passage of time, the fracture line gradually blurred. The healing of multiple rib fracture is also associated with the site of trauma, age and other factors. Duane et al. [14] found that the first and second rib fractures often had severe chest trauma and could lead to fatal vascular injury or tracheal injury. The risk of multiple rib fractures in the elderly is 2~2.5 times to that of young people [15-17]. There is a need to pay special attention to children's rib fractures. Due to the low content of calcium, children's chest has a greater flexibility and more prone to deformation [18,19].

In summary, our findings suggest that mechanical ventilation can promote the healing of the rib fracture and reduce the complications.