Cervical and lumbar disc replacements are being performed in the modern world with increasing frequency. The intervertebral discs are fibrocartilaginous cushions serving as the spine's shock absorbing system, which guard the vertebrae, brain, and other structures (i.e. nerves). The discs permit some vertebral motion: extension and flexion. Single disc movement is very limited – however considerable motion is possible when several discs combine forces. Important variables for the function and longevity of such disc anthroplasty implants are clearly defined by the material properties of the components used for their production. Polyethylene (glycol) diacrylate-based hydrogels are powerful tools for uncovering basic cellular biology because they are considered biologically inert (“blank slate”) and their mechanical properties can be varied over a large series of moduli. In addition to, PEGDA hydrogels is an emergent scaffold for tissue engineering and Regenerative Medicine since polymerization can occur rapidly at room temperature and requires low exertion input, has high water contented, is flexible, and can be modified to include a variety of biological molecules. PEGDA hydrogels are easily customizable since ECM proteins and/or growth factors can be incorporated into a hydrogel and its elasticity can be modulated from 10- 100 kPa. The complex form of an intervertebral disc can be made with the help of rapid prototyping to serve as a medium in the spine. Stereolithography was chosen to construct the disc with desired quality and dimensions.

Cervical and lumbar disc degeneration is common in today’s society and can be associated with pain and disability [6]. Until recently, the primary treatment for this conditions has focused on non-operative care or fusion surgery. Current interest has shifted to include the possibility of replacing the cervical or lumbar disc with prostheses analogous to those used for large joint replacement. It is generally believed that the disc is the primary pain generator in the setting of symptomatic degenerative disc disease. As the nucleus extrudes into annular tears, back pain can result because of irritation of the surrounding sinuvertebral nerves. Replacing the intervertebral disc with a prosthetic implant can directly remove the primary pain generator while preserving functional motion.

Out of various materials available in the market for tissue engineering or Scaffold replacement, we chose the most suitable material such as Poly (ethylene glycol) – diacrylate (PEGDA) for the replacement of intervertebral disc in order to provide a better performance and act as a good shock absorbing agent to reduce the back pain in the spine [1]. PEGDA materials have minimized swelling ratio and increased shear modulus when copolymerized with poly (ethylene glycol) monoacrylate (PEGMA).In this approach, PEGDA and PEGMA are copolymerized in a suitable composition to achieve the desired qualities and properties of the intervertebral disc for replacement. The proposed method was achieved with the help of stereolithography.

Stereolithography is a rapid prototyping technique for making 3-dimensional polymeric and ceramic objects using laser-initiated photopolymerization in solutions or colloidal suspensions [2]. In stereolithographic fabrication, a computer-aided design representation of a complex 3-dimensional object is computationally “sliced” into a sequence of 2-dimensional sections. The stereolithography apparatus (SLA) rasters a laser beam across the surface of a liquid pool of photocurable resin. The laser beam polymerizes the surface of the resin, replicating the 2-dimensional section. An elevator platform submerges the cured layer deeper into the resin pool, and the next layer is polymerized. By subsequently building each new layer above the preceding layer, the designed 3- dimensional object is replicated as a real solid structure. The depth of cure determines the thickness of the sections that can be fabricated and, therefore, the number of layers required to fabricate an object [3].

Intervertebral disc (Fig.1) is a soft fibro-cartilaginous cushion located between two vertebrae which allows some motion and serve as shock absorbers. 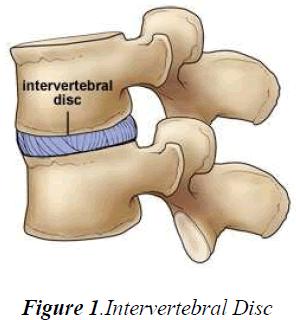 It contains a total of 23 – disc and has occupied ¼th of the spinal column’s length. The rich nutrients in the discs are diffuse through end plates. The functions of intervertebral discs are to support the axial load on the column that is delivered by the body mass and serve ligamental functions between vertebral bodies. It also assists to keep the normal shape & curvature of each spinal region (Fig. 2)(cervical, thoracic, etc.) 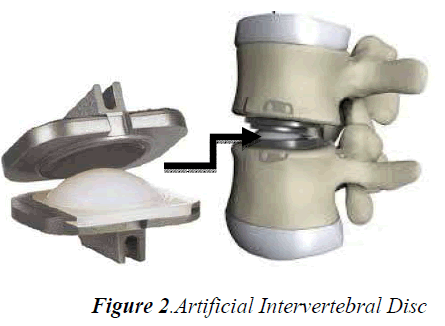 In this process (Fig.3), photosensitive liquid resin which forms a solid polymer when exposed to ultraviolet light is used as a fundamental concept [2]. Due to the absorption and scattering of beam, the reaction only takes place near the surface and voxels of solid polymeric resin are formed. A SL machine consists of a build platform (substrate), which is mounted in a vat of resin and a UV Helium- Cadmium or Argon ion laser [3]. The laser scans the first layer and platform is then lowered equal to one slice thickness and left for short time (dip-delay) so that liquid polymer settles to a flat and even surface and inhibit bubble formation. Slice is then scanned. In this system, a blade spreads resin on the part as the blade transverses the vat. This ensures smoother surface and reduced recoating time [4]. 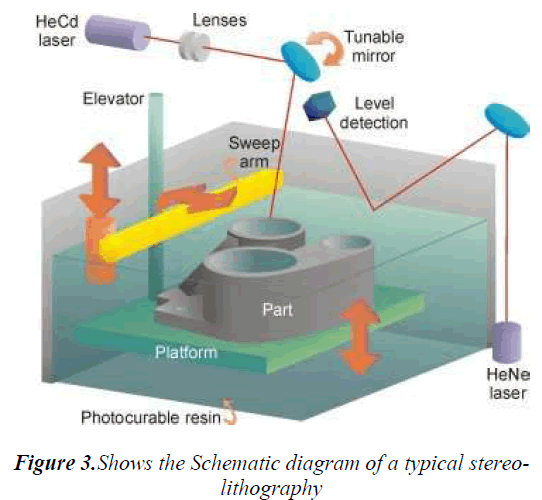 Figure 3. Shows the Schematic diagram of a typical stereolithography

It also reduces the trapped volumes which are sometimes formed due to excessive polymerization at the ends of the slices and an island of liquid resin having thickness more than slice thickness is formed [5]. Once the complete part is deposited, it is removed from the vat and then excess resin is also drained. It may take long time due to high viscosity of liquid resin. The green part is then post-cured in an UV oven after removing support structures.

Poly (ethylene glycol) (PEG) based hydrogels have attracted broad interest as a scaffold material for tissue engineering applications. The PEG backbone of these materials resists the adsorption of exogenous proteins and does not support cell addition. However, the presence of biological ligands allows cell interactions with the scaffold that can be controlled quantitatively [1]. PEGDA networks have been formed using a variety of approaches including radiation cross-linking, variation with fumarate, acrylate or methacrylate groups followed by free radical photopolymerization. Photopolymerization, including photolithography, of PEG di (meth) acrylate (PEGDA) has been employed specifically for tissue engineering applications because these gels can be formed readily in situ. This allows scaffolds to be engineered in a variety of 3-dimensional structures and with gradients of biological mediators. Proteolytically or hydrolytically degradable PEGDA derivatives have been synthesized to enhance the utility of this system as a scaffold material further. Acrylation followed by photoinitiated chain polymerization also has been used widely to form networks (Table 1) from a variety of biological and synthetic materials used for tissue engineering applications [6].

The network structure of PEGDA hydrogels (Fig.4) is distinct from traditional polymer networks that are formed by cross-linking preformed polymer chains or by copolymerizing monomer with a small fraction of a cross-linker. PEGDA hydrogels are formed classically from a single component that serves both as cross-linker and crosslinked chain. 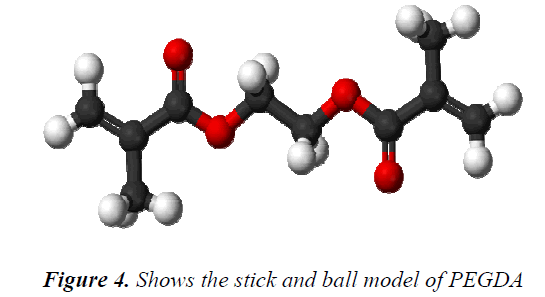 Figure 4. Shows the stick and ball model of PEGDA

The resultant network consists of PEG chains esterified to thick, multifunctional cross-link regions formed from long poly (acrylic acid) kinetic chains [1]. These materials had a special qualities of decreased hydrogel swelling, increased mechanical modulus, and decreased effective transport of non-gaseous molecules diffusing through the gel. Alterations in PEGDA concentration or size alter the kinetics of polymerization, which disturbs the chain length of the poly (acrylic acid) cross-linking nodes and the extent of network defects such as intra-chain cyclic structures or unreacted PEGDA. However, by using equations derived for networks formed from long polymers with tetra functional junctions these analyses neglect the complex nature of the PEGDA network.

When used as a tissue engineering scaffold, the corporeal properties of PEGDA hydrogel scaffolds can alter the behaviour of a variety of tissues including cartilage, flat muscle, and nerve. Increasing the initial macromer concentration or decreasing PEG length results in altered gel properties that affect cell behaviour directly including diminished access to proteins in the extracellular space, altered extracellular matrix production and cell phenotype, or decreased neurite extension [6]. The physical properties of a tissue engineering scaffold can also limit the diffusion of nutrients and growth factors and can alter the rate of degradation of degradable PEGDA derivatives. Withoutmodification, PEGDA hydrogels do not support cell attachment. Since Hern and Hubbell first reported the modification of PEGDA gels with the RGD adhesive peptide, many studies have developed this system as a scaffold for a variety of cell types. In these approach, adhesive peptides were linked to the PEGDA network via PEG-monoacrylates (PEGMA) which participate in the free radical cross-linking of the gel, results in non-network dangling ends [7]. This strategy has also been utilized to link growth factors, inert compounds and other biologically functional moieties to PEGDA gels.

Analysis of Network Structure of PEGDA

Since the hydrogels studied here were formed in solution, the method of Bray and Merrill was adapted to calculate ve, the effective cross-linked chains per gram of polymer, using the following equationand χ is the Flory- Huggins interaction parameter for PEG and water (0.426),

The mechanical properties so obtained by the above calculations, such as the mass swelling ratio and Shear modulus are the important parameters which is to be concerened while dealing with the fabrication process, and the performance were shown in the (Fig.5,Fig.6) to repre sent a clear idea about the behavior of the PEGDA 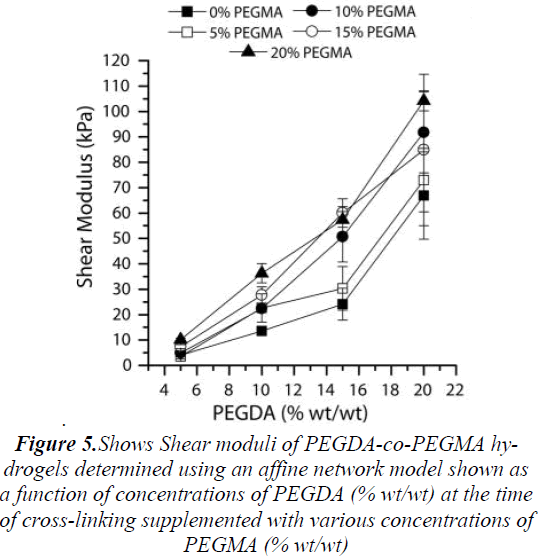 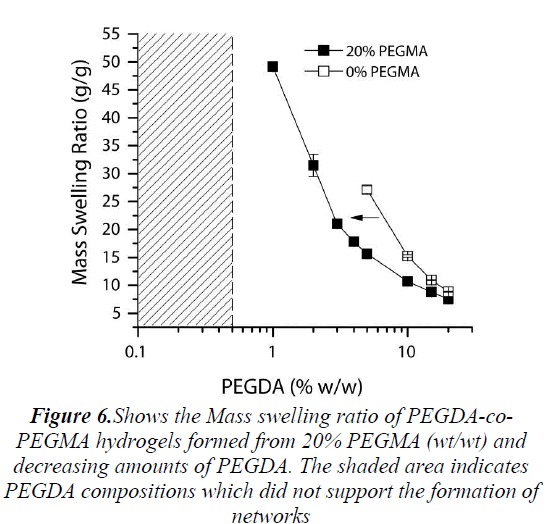 Figure 6. Shows the Mass swelling ratio of PEGDA-co- PEGMA hydrogels formed from 20% PEGMA (wt/wt) and decreasing amounts of PEGDA. The shaded area indicates PEGDA compositions which did not support the formation of networks

Procedure for Fabrication of Scaffold

The procedure to fabricate a scaffold starts with the CAD drawing of the scaffold in drawing format or by scans. The build files containing the traces that the laser will follow to selectively crosslink the photopolymer are obtained using 3DLight year. It is recommended that the build files have a single border for improved geometric accuracy. Process planning plays an important role in fabrication, and process planning includes preparation of the Computer Aided Design and Stereo lithography build files, determination of the build sequence or the sequence of build files to be used, and determination of the different volumes of solution to be added during fabrication [5].

Thus poly (ethylene glycol) diacrylate material satisfies the criteria for the replacement of intervertebral disc with its core mechanical properties such as decreased mass swelling ratio of 5.5 g/g and increased shear modulus of 110 kPa may be the best replacement for intervertebral disc. As the making of such disc were carried out by the help of stereolithography, hence it plays a paramount role in design parameters. A hydrogel with desired mechanical properties could potentially be fabricated by selecting appropriate molecular weight and concentration of PEG. The PEGDA and PEGMA concentration can be varied according to the recommendations, and it is customizable one to act as a better scaffold for tissue engineering applications.