#These two authors contributed equally to this study.

Background: The sustained compression to the spinal cord caused by muscle scars after surgery in Spinal Cord Injury (SCI) models makes it difficult to evaluate the effectiveness of therapeutic regimens. The present study aims to evaluate potential strategies to reduce such compression.

Materials and Methods: Rat SCI models were used and divided into two groups: one with muscle layer sutured after surgery and the other not sutured. The time point of muscle scar formation was determined by hematoxylin and eosin stain. Magnetic Resonance Image (MRI) was performed after the determined time point to observe the severity of compression of muscle scar against the injured spinal cord in both groups. The Basso, Beattie, and Bresnahan score (BBB score) was used to evaluate the locomotor outcomes.

Results: The scar formed in the third week after the muscle was dissected. MRI in the fourth week after surgery indicated that the rats with muscle layer sutured experienced more severe compression against the spinal cord than those not sutured. The concave caused by muscle scars in the injured spinal cord tissue of the muscle layer sutured rats was more obvious than that in non-sutured ones. There were no statistically significant differences in the BBB score between the two groups (p>0.05).

Conclusion: The compression to the injured spinal cord caused by muscle scars after surgical procedures could be relieved if the muscle layer is not sutured, and this non-suturing management may makes it easy to evaluate the effectiveness of therapeutic regimens in rat SCI models.

Treatment and rehabilitation of Spinal Cord Injury (SCI) are still major challenges today [1-3]. Animal models of SCI are a necessary prerequisite for the evaluation of suitable therapeutic regimens clinically [4-6]. An ideal animal model should be able to reflect the process of pathological changes of the injury, and meet the requirements of availability and repeatability [7]. The model also could be used to evaluate the effectiveness of therapeutic regimens [8].

In most rat SCI procedures reported previously, the muscle layer was sutured after dissection [4,9,10]. We followed this management in our own experiments, but found that severe compression to injured spinal cord tissue was caused by the scars formed after muscle dissection. The compression might make any management invalid and make it difficult to evaluate the therapeutic effects of the treatment. In our later surgical procedures on SCI models, we noticed that the compression was reduced in animals without suturing muscle layer.

Ethical approval for the study was obtained from the Ethics Committee of the Second Affiliated Hospital, School of Medicine, Xi'an Jiaotong University. Principles of laboratory animal care were followed, and all procedures were conducted according to guidelines established by the National Institutes of Health. A total of 10 male Sprague-Dawley (SD) rats (250 g ± 10 g) were used in our experiments. The rats were divided into two groups (n=5) randomly: the SCI models with the muscle layer sutured (sutured group) and those with the muscle layer not sutured (non-sutured group).

The rat was anesthetized with an intraperitoneal injection of 10% chloral hydrate solution (350 μl/100 g). After the surgical field prepared and disinfected, the layer of skin, anadesma and muscle were opened respectively and a laminectomy was performed at the T10 level to expose the target spinal cord segment. The rat was then placed in an impactor (the NYU weight-drop device, New York University, New York, USA) and a 10 g rod was dropped from a height of 25 mm to cause SCI.

After that, the muscle, anadesma and skin were sutured in layers in the sutured group. For the non-sutured group, the incision of muscle was aligned but not sutured, and the anadesma and skin were sutured in layers. The rats were then placed on postoperative care with a bi-daily procedure, which involved bladder expression and intramuscular injection of one dose of penicillin (North China pharmaceutical Co., Ltd. China; 200,000 units per rat). The postoperative care procedure lasted until the rats regained bladder function and showed no signs of infection or stress.

Muscle tissues were obtained from the surgical field in 7, 14, 21, 28 d after SCI procedures. The tissues were embedded in paraffin and sectioned at a thickness of 6 μm. Four slices of each specimen were randomly selected for hematoxylin and eosin (H and E) staining.

Evaluating the postoperative compression to the spinal cord

Magnetic Resonance Imaging (MRI) was performed after the determined time point of scar formation and gross morphology of the injured spinal cord was observed. Data on the damaged area were acquired on a 3T MR scanner (Signa; GE Medical Systems, Milwaukee, Wisconsin, USA) using a specialized coil designed for scanning rats. The rat was placed in the coil in a supine position to reduce the influence of respiratory movements on magnetic resonance artifacts of the spinal cord. The relevant parameters of T1-weighted and T2-weighted images of the injured rats were as follows: TR=560 and 2600 ms, respectively; TE=11.3 and 120 ms, respectively; matrix size=320 × 224, FOV=8, and slice thickness=1.5 mm in both.

Hind limb locomotor function was analyzed using the Basso, Beattie and Bresnahan (BBB) open-field locomotor test [11,12]. The hind limb movements of all the injured rats were recorded every 3 d through video recording by one of the researchers. The video recording was performed at 8:00 p.m. because of the large difference in the circadian activity of rats between day-time and night-time. The locomotor BBB scores were evaluated by two other researchers independently.

The H and E staining of the muscle sections revealed granulation tissues in 7, 14 d and scar tissues in the 21, 28 d after the SCI procedures (Figure 1). This observation indicated that scar tissue formation occurred roughly at the third week after the surgical management. 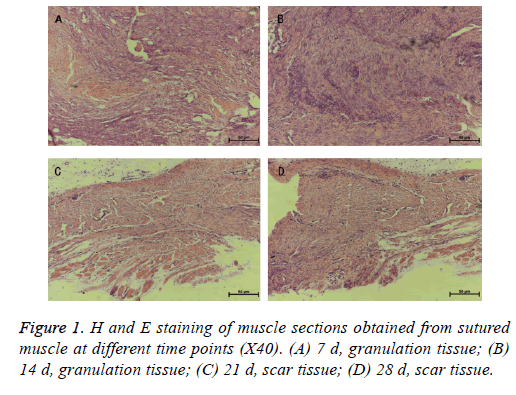 Postoperative compression to the spinal cord 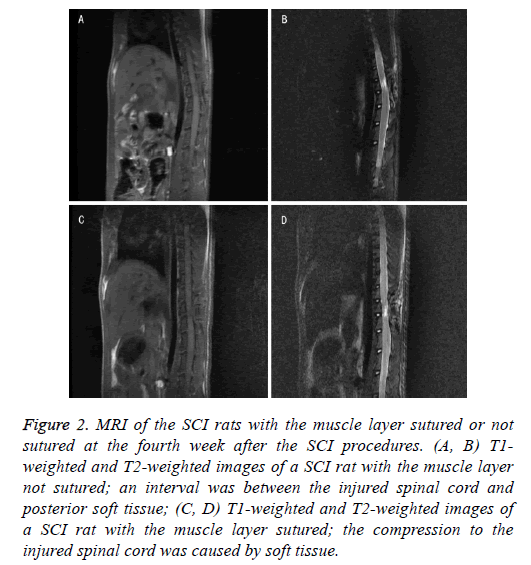 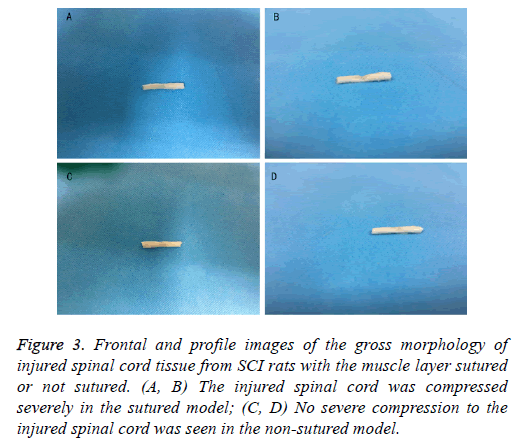 No significant differences (P>0.05) of the BBB scores were found between the two groups at different time points (Figure 4). 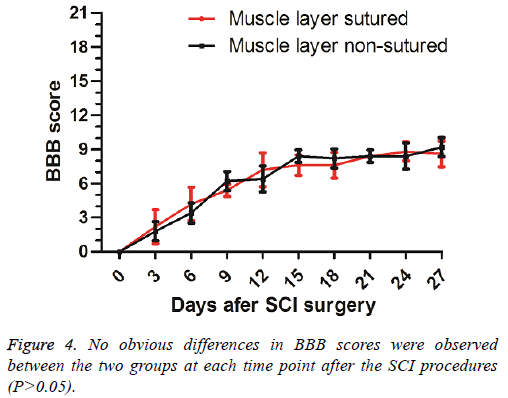 Figure 4: No obvious differences in BBB scores were observed between the two groups at each time point after the SCI procedures (P>0.05).

Evaluation of any therapy for SCI requires the use of animal models. For years, Allen's collision model has been widely used [9,10,13]. However, little attention has been paid to how to improve the models. A severe compression to the spinal cord will certainly worsen the injury, which may hinder objective evaluation of the effects of therapeutic regimens. Animal experiments are the foundation of clinical managements of the injury, and an ideal animal model may accelerate the progress of relevant research [8]. The scar tissue as a result of muscle suturing may form sustaining compression to the injured spinal cord, due to which the therapeutic regimen under investigation may appear ineffective. This might be a crucial reason for the slow development in treatment and rehabilitation of SCI in recent years. We believe that reliving the compression in SCI animal models would improve this situation.

There are some limitations in this study. The study just offered a method to make a curable rat SCI model, which need further verified by therapeutic regimens. Because spinal cord of the rat is too small and the axial image of MRI is unrecognizable, the quantitative data, such as the amount of compression on axial sections was difficult to obtain. Therefore, we did not compare the data of the axial images of MRI between two groups. In addition, electrophysiology recording should be utilized in assessing a wide variety of spinal procedures, especially after SCI.

Not-suturing the muscle layer in a rat SCI model would relieve the compression to the injured spinal cord caused by the scar tissue after the SCI procedure. This operation helps improve the animal model for SCI, which increases the potential of therapeutic methods under concern to cure the injury, and enables more accurate evaluation of the effectiveness of the therapeutic regimens. Hopefully, this may help locate better clinical management strategies for laminectomy.