Butt S*, Cheema AM
Department of Zoology, University of the Punjab, Lahore, Pakistan

Obesity is one of the most important contributors in development and progression of various metabolic/ degenerative diseases. Increased incidence of obesity is attributed to the change in various lifestyle behaviours especially increased food intake and reduced physical activity. It has been found that food intake is increased and physical activity is decreased, particularly in urban populations which results into obesity and associated metabolic disorders [1]. Obesity is attributed to be responsible for various metabolic diseases including hypertension, cardiovascular diseases, metabolic syndrome and type 2 diabetes mellitus [2-4].

Nyamdorj [5] showed that BMI and central obesity are indicators of diabetes incidence in Mauritius. Obesity is strongly associated with degenerative diseases like diabetes, hypertension, cardiovascular diseases and more. Decoda study group [6] showed that obesity indicators including BMI and central obesity demonstrate a relationship with type 2 diabetes. Qiao and Nyamdorj [7] demonstrated that BMI and central obesity are predictors of diabetes independently. Type 2 diabetes mellitus is one of the most important disorders associated with obesity and reduced physical activity. Physical activity is also known to be associated with glycaemic control hence improve the hyperglycaemic situation that exist in type 2 diabetes. Physical activity particularly the one conducted for health or leisure time is specifically known to reduce and maintain weight [8]. Interaction of lifestyle factors with hormones is also studied and contemporary lifestyle has been found to be associated with circulating hormone levels in human and animal subjects [9]. Leptin is a one of the very important hormones that has been found to be involved in regulation of fuel metabolism in body hence related to overweight status and obesity. Leptin is known to control appetite hence involved in weight control. Leptin is a major regulator of appetite and energy expenditure [10].

The present study was planned in this context to investigate the relationship between physical activity with obesity indicators and leptin levels in a type 2 diabetic local population.

In this study, an interview-based questionnaire was filled for each diagnosed type 2 diabetes patient including information about their physical activity status. Weight, height, waist and hip circumference were recorded for each subject. Blood sample was obtained with the help of a trained personnel, which was taken to the lab in ice-box and serum was separated for further assessments.

Body Mass Index (BMI), Waist to Hip Ratio (WHR) and Waist to Height Ratio (WHiR) were calculated using methods described in WHO, 1995 and 1998. BMI was calculated by dividing weight in kilograms by height in meters square. Waist to hip ratio was calculated as waist circumference by hip circumference, both taken in centimetres. Waist to height ratio was calculated by dividing waist circumference by height, both taken in centimetres. Serum leptin levels were measured by Enzyme-linked Immunosorbent Assay (ELISA) in a selective group of patients using commercially available ELISA kit prepared by Diagnostic Automation Inc., USA (Cat #1742-6) following the protocol described in the kit (sandwich ELISA).

All variables were entered into MS Excel spread sheet and analysed statistically using SPSS v17.0. Groups were compared using t test and correlation as per requirement.

Type 2 diabetes mellitus is a degenerative disorder that is on increase in the world and in Pakistan due to contemporary lifestyle marked by reduced physical activity and increased or imbalanced food intake that leads towards reduced obesity and quality of life and economic burden on the society. Interactions of lifestyle with hormonal mechanisms need to be explored for a better understanding of the interactions and finding solutions. The present study was aimed to investigate the relationship of physical activity with obesity indicators and serum leptinimportant hormone involved in such interactions. 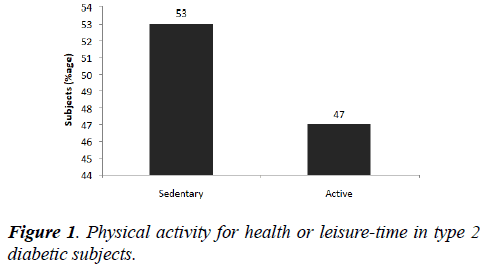 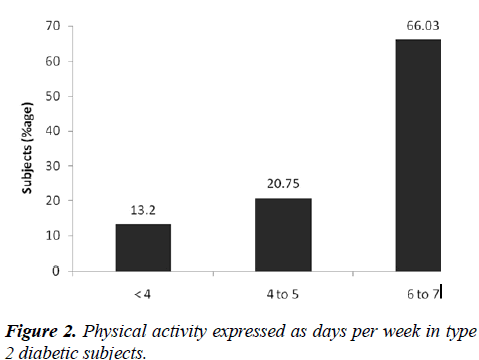 Relationship of Physical Activity with Body Composition and Leptin Levels

Physical activity was found to be strongly associated with body composition and other parameters. Statistical analysis revealed that the BMI of the subjects which are sedentary is significantly higher than those who are physically active (29.2 ± 0.78 versus 26.6 ± 0.59 Kg/m2) (Figure 3). 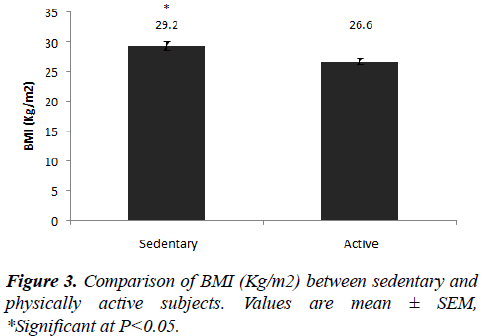 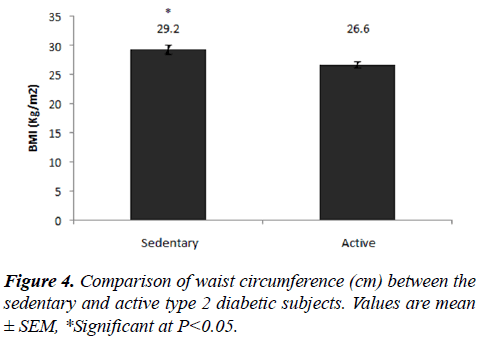 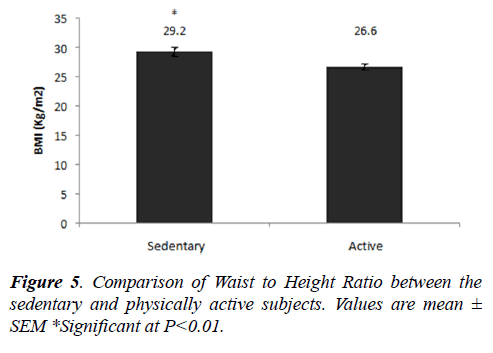 Figure 5: Comparison of Waist to Height Ratio between the sedentary and physically active subjects. Values are mean ± SEM *Significant at P<0.01. 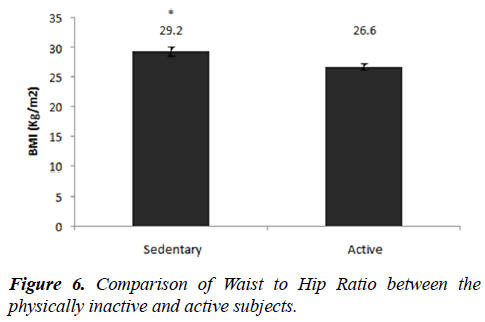 Figure 6: Comparison of Waist to Hip Ratio between the physically inactive and active subjects. 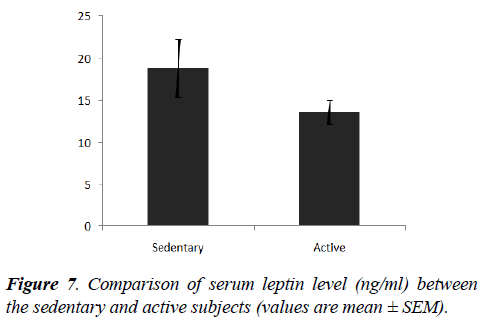 Regarding duration per day was variable among subjects; 28% subjects perform physical activity for 10-30 minutes per day while only 42% do it for 30-60 minutes per day (Table 1). It is concluded that many subjects who perform physical activity, do it quite casually and not up to the limit of reasonable health effects but still they try to do as per their understanding.

Physically active subjects have a significantly lower BMI than the sedentary subjects (P<0.05). Same is true for waist circumference and WHiR. Leptin level were decreased in physically active subjects but could not reach statistical significance. Tuomilehto showed that type 2 Diabetes could be prevented by changes in life styles of high risk subjects [11]. Ramachandran demonstrated that lifestyle modifications can prevent diabetes in Asian Indians with impaired glucose tolerance [12]. Hu et al. demonstrated that after a long term cohort study type 2 Diabetes could be prevented by adoption of a healthier lifestyle to reduce obesity in women [13].