Breast cancer is frequently observed throughout the world as the second cause of cancer-related death in women [1,2]. Young women with higher body mass index (BMI) may have a greater risk of breast cancer [3-11]. In addition, obese individuals have a greater risk of diabetes also [4-9]. Again, they have unusually high leptin levels, as for some of them, the brain does not respond to leptin, so they keep eating despite excessive fat stores, which is known as leptin resistance. Naturally, the following queries arise for scientific investigation. What is the relation of leptin with BMI, age, glucose, insulin and breast cancer biomarkers? What are the associations of leptin with these factors? What are the roles of leptin on these factors? The present note examines these queries based on real data set.

For a multivariate data set, generally associations of a factor with other covariates can only be obtained by suitable probabilistic modeling. Herein the taken data set is a multivariate data, which is given in UCI Machine Learning Repository. The data set contains 116 (52 healthy controls and 64 patients) women containing 10 study variables, and the data description is given in [12]. The data set contains the following factors.

Note that the data set contains glucose and insulin as diabetes marker, and resistin, MCP-1, adiponectin, leptin and HOMA as breast cancer biomarkers. The response leptin is positive, continuous and heteroscedastic, which can be modeled by any appropriate transformation, if it is stabilized under that transformation. But the response leptin is not stabilized by any appropriate transformation. So, it can be modeled by joint generalized linear models (JGLMs) with Log-normal and Gamma distributions [13,14]. Final model is selected based on the lowest Akaike information criterion (AIC) value (within each class), which minimizes both the squared error loss and predicted additive errors [15-18]. Herein the response leptin is modeled using JGLMs with both Log-normal (AIC=869.84) and Gamma (AIC=869.78) distribution. But based on AIC rule, both the distributions give identical results. Again the final model is verified by model checking diagnostic plots such as absolute residuals and normal probability plots in Figure 1. Figure 1a shows the absolute residuals plot which is almost flat diagram with the running means, concluding that variance is constant with the running means. In addition, normal probability plot in Figure 1b does not indicate any lac of fit. So, both the plots reveal that the final fitted leptin model is an approximately a true model of it. The relationship of leptin is given by the following two of its mean and variance equations. The final Gamma fitted Leptin mean ( μˆ ) model is μˆ =exp(-0.227+0.092 BMI+0.006 Glucose+0.010 Insulin+0.025 Adiponectin+0.016 Resistin–0.001 MCP.1–0.001 Adiponectin*Resistin), and Gamma fitted Leptin variance (σˆ2 ) model is σˆ2 =exp(- 3.809+0.042 Age+0.153 Resstin–0.003 Age*Resistin). 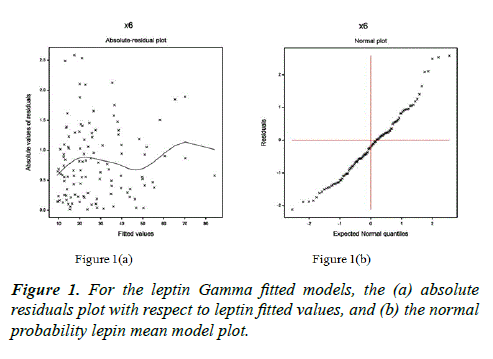 Figure 1. For the leptin Gamma fitted models, the (a) absolute residuals plot with respect to leptin fitted values, and (b) the normal probability lepin mean model plot.

The above two models concludes the following.

• Variance of leptin is directly associated with age (p=0.0034), indicating that leptin variance is higher at older ages than younger.

The report focuses the associations of leptin with glucose age, insulin, BMI and breast cancer biomarkers through probabilistic modeling of its mean and variance. Final model has been selected based on lowest AIC value and model checking plots. The current mean and variance models of leptin focus many interesting associations with many diabetes and breast cancer biomarkers, which have not been reported in any earlier articles. Medical practitioners and researchers will be benefitted from the report. It is shown herein that higher leptin levels invite many diseases such as diabetes and breast cancer. Every individual should care on leptin levels.

This research was supported by the Brain Research Program through the National Research Foundation of Korea (NRF) funded by the Ministry of Science, ICT and Future Planning (2014M3C7A1062896).