Objective: To investigate the usefulness of PLR in predicting severity and complexity of coronary atherosclerosis as assessed by the SXscore in patients with Non ST elevation myocardial infarction NSTEMI who underwent nonurgent coronary angiography (CA).

Background: In NSTEMI patients, there is a debate whether early angiography and revascularization is beneficial compared with a more conservative approach. Platelet to lymphocyte ratio (PLR) is a new prognostic marker that gives idea about inflammation and aggregation pathways and may predict coronary atherosclerotic burden. PLR can be used to select patients who should go under angiography earlier due to excessive ischemic load.

Methods: We retrospectively evaluated 111 consecutive patients who presented with NSTEMI and underwent non-urgent coronary angiography between July 2016 and March 2017. The PLR was calculated as the ratio of the platelet count to the lymphocyte count. The Syntax scores SX of all patients were calculated. A low SX score was defined as ≤ 22, an intermediate score as 23 to 32, and a high score as ≥ 33.

Conclusion: In patients with NSTEMI, PLR has significant association with syntax score and may be used for risk stratification and assessing optimal timing for coronary angiography.

Coronary artery disease (CAD) is the leading cause of morbidity and mortality throughout the world [1,2]. It has a complex pathophysiology, and inflammation seems to play an important role in CAD [3]. Previous studies have shown that higher levels of inflammatory markers are associated with the severity of CAD and worse cardiovascular outcome [4]. Although endothelial damage has been known as the triggering factor for the formation of atherosclerotic plagues, inflammatory process is responsible in the initiation and progression of the atherosclerosis [3] Previous studies have demonstrated an association between high circulating platelet count and major adverse cardiovascular outcomes in patients with CAD as well as in healthy adults [5-7]. Platelet to lymphocyte ratio (PLR) is a new prognostic marker that integrates the risk prediction of these two parameters. It gives an idea about both the aggregation and inflammation pathways, and it may be more valuable than either platelet or lymphocyte count alone in the prediction of coronary atherosclerotic burden. The burden of coronary atherosclerosis is closely associated with prognosis in acute coronary syndrome (ACS) [8]. The SYNTAX score (SXscore) is an angiographic scoring system based on the severity and complexity of coronary lesions [9]. The SXscore has been shown to be able to predict mortality and morbidity at early and late follow-up in patients with ACS [10-12]. Patients with ACS may present an STsegment elevation myocardial infarction (STEMI), non STsegment elevation myocardial infarction (NSTEMI), or unstable angina. Current STEMI guidelines recommend urgent angiography followed by immediate mechanical opening of the infarct-related coronary artery to restore coronary flow (reperfusion therapy), a strategy that has been shown to reduce mortality. In NSTEMI patients, however, there has been continued debate over the last 10 years whether “immediate,” “urgent,” or “early” angiography and revascularization is more beneficial than a more “conservative” or “selective invasive” approach [13]. Since it is well known that inflammatory response is closely associated with the pathogenesis of coronary atherosclerosis, we aimed to investigated the usefulness of PLR in predicting severity and complexity of coronary atherosclerosis as assessed by the SXscore in patients with non-ST-segment ACS who underwent non-urgent coronary angiography (CA). By this way, we also investigated if PLR can be used to select patients who should go through angiography earlier due to excessive ischemic load.

The present study is a single-center and retrospectively designed study, consisting of eligible consecutive patients who were hospitalized at our institution because of NSTEMI and underwent non-urgent coronary angiography (CAG) between July 2016 and March 2017. A total of 111 age and gender matched patients were admitted for analysis. Exclusion criteria consisted of hematologic disorders, active infectious or inflammatory diseases, rheumatologic diseases, severe renal or liver disease, chronic renal disease, use of glucocorticoids, and malignancy. Since the SXscore has been used only for patients with native coronary artery lesions, patients with histories of CAD (bypass grafting and/or coronary stent history) were also excluded. NSTEMI was diagnosed when characteristic chest pain lasted ≥ 20 min with or without associated ST-segment depression ≥ 0.1 mV and/or T-wave inversion in 2 contiguous leads on the electrocardiogram or no electrocardiographic abnormalities and presence or absence of increased levels of troponin.

The SXscores of all patients were calculated by two independent experienced interventional cardiologists who were blinded to the identities and clinical information of the patients from baseline diagnostic CA. Each lesion with ≥ 50% diameter stenosis in vessels ≥ 1.5 mm in diameter was scored using version 2.1 of the on-line calculator at www.syntaxscore.com. The SXscore was defined as low if ≤ 22, intermediate if ≥ 23 and ≤ 32, and high if ≥ 33 [14]. By this definition, patients with SXscores ≥ 23 were considered to have moderate to severe CAD. Thus, the patients were divided into 2 groups, those with low SXscores (≤ 22) and those with intermediate or high SXscores (≥ 23).

All analyses were performed using R 3.3.2v program (open access). Continuous variables were defined as means and standard deviation; categorical variables were given as percentages. Hematologic parameters and the PLR, which was derived from these parameters, were checked for normal distribution using Shapiro-Wilks test. Based on the distribution pattern of variables, Independent Samples t-test (for normally distributed parameters) or Mann Whitney U test (for not normally distributed parameters) was used. Categorical variables were compared by the chi-square test. Pearson’s correlations were used to analyze the correlation between PLR and SXscore. Receiver-operating characteristic analyses were used to detect the cut-off value of PLR in the prediction of intermediate to high SXscore in order to select patients to be prioritized for coronary angiography; p values <0.05 were considered significant. The study protocol was approved by the local ethics committee.

Table 1: Baseline clinical and angiographic characteristics of the subjects.

Baseline laboratory characteristics of the patients are given in Table 2. According to the admission laboratory results, patients in the intermediate to high SXscore group had significantly higher platelet to lymphocyte ratio (PLR), neutrophil to lymphocyte ratio (NLR) and neutrophil count. On the other hand, while platelet count was similar, lymphocyte and monocyte counts were significantly lower in the intermediate to high SXscore group. Receiver-operating characteristic analyses were used to detect the cut-off value of PLR (Tables 3). A PLR value of 178 or lower predicted a low SXscore defined as ≤ 22 with a sensitivity of 91.3% and specificity of 100% (Figure 1). 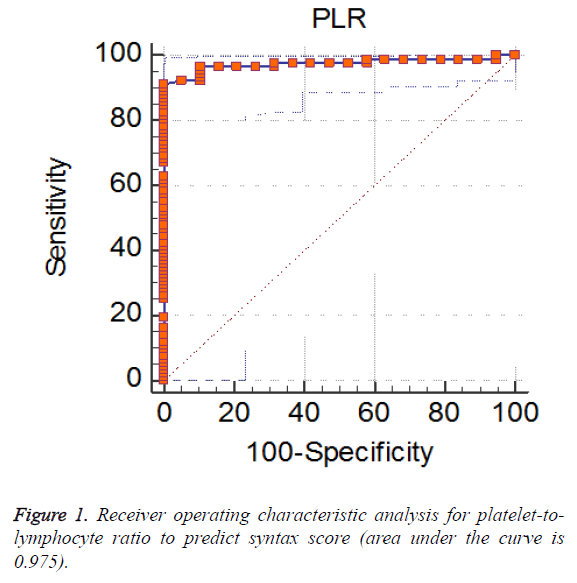 In the present study, we have shown that PLR at admission is an independent predictor of the prevalence of more complex coronary artery lesions (SXscore ≥ 23) in patients with NSTEMI. In addition, the study has shown that a cut-off value for PLR can be detected to predict the severity of CAD in patients with NSTEMI while they have not yet been evaluated with coronary angiography. Platelets and inflammation play an important role in the pathophysiology of CAD. The role of inflammation in CAD has been studied extensively, and a consistent relationship between various inflammatory markers and CVD has been established in the past [15-17]. In cases of sustained inflammation, lymphocyte counts decrease due to increased lymphocyte apoptosis. Also, ongoing inflammatory conditions lead to increased proliferation in megakaryocytic series and relative thrombocytosis.

Lymphocytopenia is a common finding in chronic inflammatory states because of increased lymphocyte apoptosis. Moreover, the leukocyte production in bone marrow makes a shift towards increasing neutrophils and decreasing lymphocytes in response to stress. Lymphocytes represent a more convenient immune response, while neutrophils cause a destructive inflammatory reaction [18]. The diagnostic and prognostic usefulness of a low lymphocyte count was demonstrated in patients with ACS and stable CAD, respectively [19,20]. The circulating platelets may contribute to the initiation of atheromatous plaque formation and trigger its complications [7]. High platelet and low lymphocyte counts in circulation have been suggested to be risk indicators of worse cardiovascular outcomes in previous studies [5-7,18-21]. A recently developed new prognostic marker, high PLR, integrates the predictive risk of these two parameters together. The advantage of PLR calculation could be that it reflects the condition of both aggregation and inflammatory pathways, and it may be more valuable than either platelet or lymphocyte count alone in the prediction of coronary atherosclerotic burden.

In this study, we also found a significant association between platelet lymphocyte ratio (PLR) and The SYNTAX score in patients with NSTEMI. The mechanisms of the relation between PLR and SXscore are not clear. One of the possible mechanisms may be an increased inflammatory response. Balta et al. demonstrated that PLR may be a useful inflammatory marker in clinical practice [22]. Platelets, as an acute phase reactant, may also increase in number in response to various stimuli (systemic infection, inflammatory conditions, bleeding, and tumors), resulting in overproduction of proinflammatory cytokines [23,24]. Higher platelet counts may reflect underlying inflammation, as several inflammatory mediators stimulate megakaryocytic proliferation and produce relative thrombocytosis. Another likely mechanism may be the increased physiologic stress induced by ACS. It has been proposed that in response to physiologic stress during myocardial ischemia or infarction, there is release of cortisol and catecholamine, redistribution of lymphocytes to lymphatic organs, and apoptosis, which lead to lymphopenia [25]. High level of physiologic stress means high levels of cortisol and catecholamine, which may translate into a lower lymphocyte count.

According to our findings, higher PLR values on admission were significantly associated with intermediate to high SXscores in patients with NSTEMI. To our knowledge, this is the first study to have investigated the role of PLR as a predictor measure of CAD severity and ischemic load to give priority to patients in terms of coronary angiography timing in patients with NSTEMI although Kurtul et al. reported in a previous study that PLR at admission is significantly associated with the severity and complexity of coronary atherosclerosis in a heterogeneous patient population consisting both STEMI and NSTEMI [30].

This study has a few limitations. Firstly, platelet functions were not measured and also PLR was based on a single measurement. It would be interesting to know if the PLR changes over time and if the PLR on subsequent tests remains a predictor of the severity of coronary disease. Second, we used a retrospective design for this study, which is not the best design to follow up the effect of coronary angiography timing in terms of both morbidity and mortality. A longer period of follow-up may be necessary to assess the accuracy of deciding the coronary angiography time based on PLR at admission. Finally, all patients were from a single center and the sample size was not large. Despite the limitations of the study, we observed that individuals with higher PLR are significantly more likely to have higher SYNTAX scores. Therefore, further large-scale, prospective studies are needed to gain more information about predicting CAD severity before performing coronary angiography in patients with NSTEMI.

In patients with NSTEMI, PLR has significant association with the SYNTAX score. Future research needs to investigate the relationship with longitudinal data to establish a decision in terms of timing of coronary angiography in patients undergoing non-urgent CAG. PLR is easy to access and inexpensive, so before performing coronary angiography, it appears to be additive to conventional risk factors and commonly used biomarkers for risk stratification and assessing optimal timing for coronary angiography. It can help to identify individuals at high risk for advanced CAD who might need an earlier therapeutic approach and closer clinical follow-up.