The term stroke defines rapidly developing clinical symptoms and signs of focal loss of cerebral function lasting for more than 24 hours leading to death with no apparent cause other than vascular origin [1]. The increasing incidence of stroke in Indian patients (>65 years) is possibly due to industrialization, stress of life, less exercise, increasing incidence of smoking, hypertension and other factors.

Paraoxanse [(PON) E.C 3.1.8.3 aryldialkyl phophatase] has been extensively studied in the field of toxicology because it hydrolyses organophosphate compounds used as insecticides and nerve gases. [2,3] PON is synthesized in the liver and in serum is located of high density lipoprotein (HDL). The serum HDL concentration is inversely correlated with atherosclerosis risk [4]. HDL protects against oxidative modification of LDL [5,6] which is believed to be central in the initiation and progression of atherosclerosis. [7] The antioxidant activity of HDL relates to its enzymes primarily PON, but also leci-thin/cholesterol acyl transferase (LCAT) and these can prevent lipid peroxide accumulation on LDL both invitro and in vivo [8]. Some studies have shown that serum PON activity is decreased in disease that are associated with accelerated atherogenesis [9,10]. Many studies [11,12,13,14) have proposed that PON-192 polymorphisms might be a risk factor for atherosclerosis. But some studies have failed to find such a relationship .Therefore the present study was carried out to assess the serum PON activity in ischemic stroke patients compared to controls.

The study was case controlled in design. We have selected the patients as they have presented. Patients included in the present study were all admitted to the Intensive Care Unit (ICU) or attending the outpatient department of Medicine of Maharaja Yashvantrao Hospital attached to Mahatma Gandhi Memorial College, Indore (M.P).

The study group consisted of 100 patients with ischemic stroke between 60-75 years of age and they were undergoing admission to hospital and 100 age and sex matched controls were taken with no family history of stroke. Brief clinical history covering the signs and symptoms, past, personal and family history of concerned risk factors were taken. All participants gave written informed consent and this protocol was approved by ethical and research committee of Mahatma Gandhi Memorial Medical College, Indore. Serum cholesterol, HDL-c, LDL-c were determined by CHOD-PAP method (Roche Diagnostics). Serum triglyceride was measured enzymatic GPO-POD method (Roche Diagnostics). Serum PON activity was measured by 5.5mmol/l p-nitrophenyl acetate (Sigma Chemicals) as a substrate, the increase in the absorbance of p-nitrophenol formed at 412nm was measured by using ELICO spectrophotometer [15]. The activity of PON was measured in 20mM/L tris buffer at pH8.0 and which contains 1mM calcium chloride. The generated product of p-nitrophenol was calculated by using molar extinction coefficient of 17000 per mole per cm t pH 8.0.Results are expressed as U/ml. (1U, 1nmol p-nitrophenol formed per minute).

Diabetes was diagnosed on the basis of fasting blood glu-cose concentration of >126mg/dl. Systemic hypertension was considered to be present if the patient was taking hypertensive treatment at the time of hospital admission or if the blood pressure was considered >145mmof Hg systolic and 90mmof Hg diastolic. For lipid analysis samples were obtained over an overnight fast. Patients who had serum concentration of total cholesterol >240mg/dl or triglycerides >300mg/dl or LDL-c >160mg/dl or HDL-c<30mg/ dl are considered as hyperlipidemia.

All values are presented as mean+/-s.d. Statistical significance was analysed by student‘t’ test. The level of significance was set at p<0.05.For multivariate analysis median (50 percentile) was used as cut off value (as a marker) for differentiating the presence or absence of the disease. 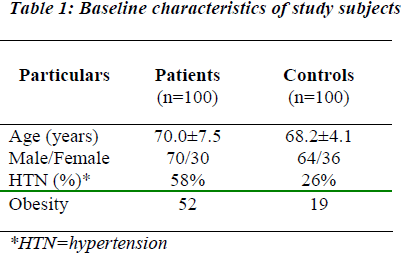 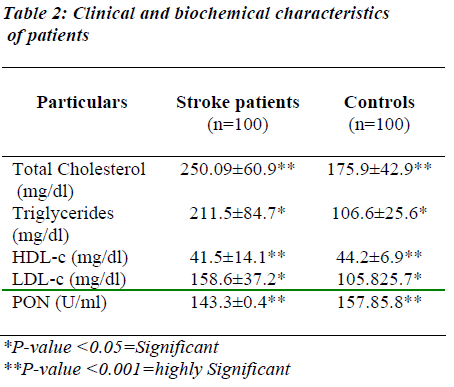 The multivariate regression analysis for risk factors versus ischemic stroke revealed that hypertension, increased triglycerides and LDL-c and decreased HDL-c, paraoxanase activities were significantly associated with the occurrence of ischemic stroke as indicated in Table 3. 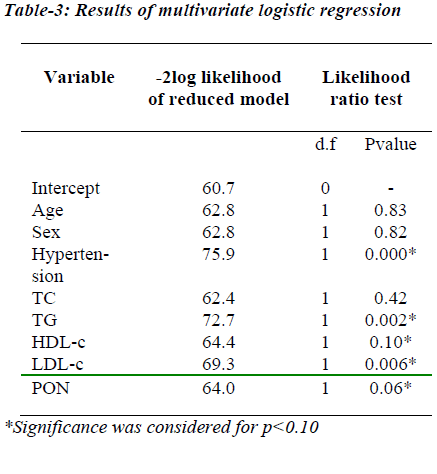 In this study, mean age of patients was 70.0+/-7.5 years. The incidence of ischemic stroke was high as 80% as given by health information in India in 1988. [16] Sex distribution in this study was 70% males and 30% females. The study was predominantly male oriented as ischemic stroke affects male’s severly and commonly than females increased serum cholesterol is causally associated with increased risk of ischemic stroke. Specifically a 10%increase in serum cholesterol is associated with 20 to 30% increased risk of stroke and elevations may be associated with higher risk of stroke as given by La Rosa. [17] Like other 16tudies [18,19,20] in our study hypertension diabetes mellitus were found to be significantly high.

Our current findings show that low serum PON activity in ischemic stroke patients was profoundly lower than controls. Similar observations are noticed in other studies. PON has been suggested as the factor responsible for an-tioxidant role of HDL. Several studies have shown an increase in the products of lipid peroxidation in plasma of patients with ischemic stroke [21] Further more LDL-c isolated from the plasma of patients of ischemic stroke has reported to be more susceptible to oxidation invitro than from normal subjects [22] and autoantibodies oxidized to lipoproteins are increased in patients with ischemic stroke. PON present on serum is reported to be located on HDL, low concentration of HDL increases susceptibility to atherosclerosis and consequently ischemic stroke [23].

In summary, we have shown that PON activities towards nitro phenyl acetate were lower in subjects with ischemic stroke than in control subjects. So that identification of these individual factors has opened up different approaches other than simplify modifying the lipid profile and traditional risk factors in primary prevention of ischemic stroke. PON would thus be seen worthy of further study as an etiologic factor in the development of ischemic stroke and perhaps other diseases. Although the present study validates the earlier views that PON activities are indeed associated with ischemic stroke, further verification in large prospective case control studies to draw a concrete conclusion is warranted.