We investigated the effect of fat meal load (FML) on inflammatory factors during the process of atherosclerosis (ATH). Ten male New Zealand white rabbits (fed with high-fat meal for 12 weeks, and provided FML at the beginning (W1), as well as in the 4th, 8th, and 12th weeks, (W4, W8, and W12, respectively) were used in this study. Blood samples were collected after fasting and at 2, 4, 6, and 8 h after FML (T0, T1, T2, T3, and T4, respectively) to detect plasma endothelin-1 and interleukin (IL)-6, IL-8, and IL-10; ATH conditions in the abdominal aorta were observed ultrasonically. At W12, the animals were sacrificed and ATH conditions were detected by hematoxylin and eosin staining. After continuous high-fat feeding, fasting plasma endothelin-1 was increased in W4, W8, and W12, IL-8 was increased in W4 and IL-10 was increased in W4 and W8. After FML, endothelin-1 was significantly increased at W0-T2, and W12-T1, IL-8 was increased at W0-T1-3, W4-T1-2, and W8-T1-3, and IL-10 was increased at W0-T1-4, W4-T2-4, and W12-T1-2. During early ATH, inflammation was severe and clearly observed at 4-6 h after FML.

Atherosclerosis (ATH) is a pathological process during which the arterial intima is thickened, the vascular wall becomes stiff, and atheromatous plaques appear locally, leading to stenosis or occlusion of the vascular cavity and corresponding clinical symptoms. ATH-induced cardiovascular and cerebrovascular diseases are the leading cause of human mortality worldwide. The occurrence and development mechanisms of ATH are very complicated. Since the inflammation hypothesis was proposed by Ross [1], an increasing number of researchers have considered ATH as a chronic inflammatory response based on endothelial dysfunctions. A recent clinical trial showed that some anti-inflammatory cardiovascular drugs reduced the incidence of major coronary events and total coronary events via their anti-inflammatory effects, but these drugs failed to meet the primary endpoints of reducing the risks of cardiovascular death, heart attack, and stroke [2]. Therefore, systematically determining the relationships between inflammations and ATH is essential for preventing and treating cardiovascular and cerebrovascular diseases.

High-fat meals may cause endothelial dysfunction and mild inflammation in the vessel walls [3,4], and postprandial blood fat disorders play important roles in the occurrence and development of ATH [5]. Giannattasio et al. [6] confirmed that a high-fat diet could cause acute hypertriglyceridemia as well as significantly damage endothelial functions; this damage was much more obvious in patients with existing lipid disorders. After consuming high-fat, high-carbohydrate diets, more intense and more durable inflammation was observed in obese subjects [7]. After one fat meal load (FML), healthy young men show reduced coronary blood flow [8]. In contrast, American society for nutrition once reported a review that presented healthy diets rich in lean fish, raw vegetables, fresh fruit, and poultry, with wine and fewer high-fat dairy products favorably slow the development of ATH by means of improving endothelial dysfunction and mild inflammation possibly [9], and reduce the incidence of cardiovascular events. However, its mechanisms of action are not clear and definite.

Ten healthy male New Zealand white rabbits (3 months old, weighed 2.5-3 kg, purchased from the Shanxi Institute of Animal Husbandry and Veterinary) were fed with high-fat diets for 12 weeks, and a high-fat meal load was administrated at the beginning, as well as in the 4th, 8th, and 12th weeks. Refer to the following related literature, Hypercholesterolaemia and ATH can be triggered in a rabbit with more than 1-2% cholesterol [13], a high-fat diet given (contained 1% cholesterol, 8% egg yolk, and 91% basic feed) are to make rabbit atherosclerosis model, fat-load diet given (an additional 1% cholesterol, the amount of 2% cholesterolon) is the purpose of this test, on the study of the relationship between fat-load induced inflammation and atherosclerosis. This study was carried out in strict accordance with the recommendations in the Guide for the Care and Use of Laboratory Animals of the National Institutes of Health. The animal use protocol has been reviewed and approved by the Institutional Animal Care and Use Committee (IACUC) of the First Hospital of Shanxi Medical University.

In W1, 4, 8, and 12, all animals were intramuscularly injected SumianxinII (0.1-0.2 mL/kg) for anesthesia, and then placed in the supine position to detect the cross-section and longitudinal section of the abdominal aorta from top to bottom along the abdominal midline (color Doppler ultrasound, MyLab 90, vascular probe frequency 7-10 MHz, ESAOTE, Genoa, Italy); conditions such as whether the vascular wall was smooth, the vascular cavity showed stenosis, the intimal-media thickness (IMT) was thickened, and plaques formed on the abdominal aortic wall, as well as their morphologies and sizes, were observed and recorded.

At the end of the experiment (W12), all animals were sacrificed and the abdominal aorta was isolated for conventional hematoxylin and eosin (H&E) staining followed by light microscopy (Olympus BX53, Tokyo, Japan) to observe the ATH conditions on the vascular cross-sections.

Note: comparison among different time points in the same week,*P<0.05 (From table 2, we can see IL-6 was not changed significantly in W4, W8, W12 and after the administration of FML every 4 weeks, IL-6 increased and then decreased, and was significantly decreased at W8-T2, W12-T2). 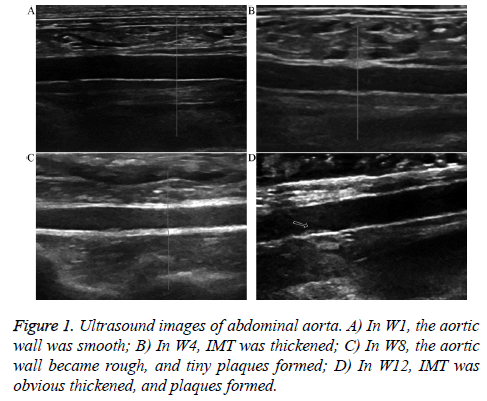 At the end of the experiment, the abdominal aortas of the 10 animals showed ATH. The pathological results are shown in Figure 2. The vascular intima was continuous and smooth and the cells were arranged in order (Figure 2A). In W12, the vascular endothelial cells swelled and the smooth muscle cells were abnormally arranged, with a large number of foam cells (Figure 2B). 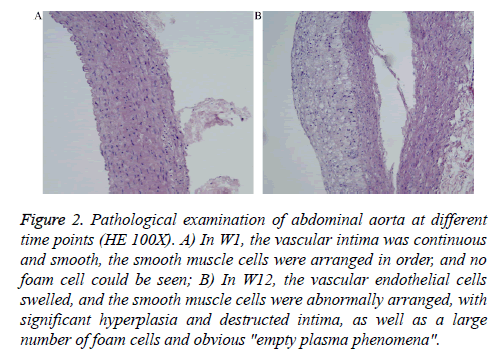 Figure 2: Pathological examination of abdominal aorta at different time points (HE 100X). A) In W1, the vascular intima was continuous and smooth, the smooth muscle cells were arranged in order, and no foam cell could be seen; B) In W12, the vascular endothelial cells swelled, and the smooth muscle cells were abnormally arranged, with significant hyperplasia and destructed intima, as well as a large number of foam cells and obvious "empty plasma phenomena".

Endothelial dysfunction is an initiating event towards the occurrence of ATH. ET-1 is a potent vasoconstrictor, damaging arterial endothelial functions and exhibiting proinflammatory effects [14], thus promoting the formation and development of ATH. Lerman et al. [15] found that patients in the early stage of ATH and coronary artery endothelial dysfunction exhibited increased blood ET-1 levels. Pan et al. [16] found that after feeding with high-fat and high-salt alcohol diet for 13 weeks, the serum ET-1 level in rats was significantly increased. Vogel et al. [17] found that at 4 h after a high-FML, healthy subjects exhibited seriously damaged endothelium-dependent vasodilation. The results of this study are consistent with those of previous studies, particularly that plasma T0-ET-1 was maintained at a high level during the various stages of ATH; further administration of FML significantly increased endothelial damage. As ATH progressed, the postprandial ET-1 peak time was advanced from 4 h to 2 h after the meal, indicating that patients with ATH always exhibited endothelial dysfunction and show greater effects from the FML. Therefore, these subjects should avoid high-FML. This may be related to the lower tolerance of sustained injury stimuli after endothelial function injury, as well as with the influence of a continuous high-fat diet on hepatic metabolic functions.

Inflammation is the basis for the occurrence and development of cardiovascular diseases, and excessive inflammation may induce and promote ATH and cause acute and chronic ischemic events [18]. IL-6 potently alters C-reactive protein-promoted ATH progress [19]. IL-8 activates neutrophils, thus causing the proliferation and aggregation of vascular smooth muscle cells and participating in the early formation of ATH [20]. Circulating IL-6 and IL-8 may promote inflammation and local angiogenesis and increase the risk of thrombosis, so they may be involved in acute and chronic vascular events in patients with coronary heart disease [21,22]. In this study, we found that during ATH development, the T0-IL-6 level in W4 was not significantly increased, but IL-8 was significantly increased, indicating that long-term high-fat diet-induced inflammation plays important roles in vascular remodeling and plaque formation in the early progressive stages of the disease. Thus, atherosclerotic diseases require early intervention and primary prevention measures in populations with a high risk of cardiovascular diseases.

IL-10 may negatively regulate lipid deposition and inflammations and have anti-atherosclerotic effects [29]. Caligiuri et al. [30] found that the low-density lipoprotein levels and procoagulant activities in rats with insufficient apolipoprotein E and IL-10 were increased, and the instability of plaques was increased. Few studies have examined the changes and effects of high-fat diets on IL-10 in various stages of progression of ATH. The results of this study suggest that in the early progressive stage of ATH, the anti-inflammatory responses of the vascular walls were strong, and highcholesterol load may enhance these responses. These results indicate that IL-10, the in vivo ATH-protective factor, plays important roles in the early progressive stage of AS. With the aggravation of vascular wall lesions and the formation of plaques, the mechanisms of protective compensation were weakened. Significant anti-inflammatory responses can be induced 4-6 h after high-fat meals, corresponding to the time that worsened inflammation was observed.

This study was limited by the sample size, individual differences in the experimental animals, and the total experimental time, which may have influenced the results. The changes in inflammation during ATH require further investigation with increased sample sizes and extended experimental times. Limited by the different conditions in different experimental stages, ECG was only applied to observe the conditions of the abdominal aorta, and follow-up studies should observe other arteries such as the coronary artery or record changes in plaques in order to verify our results.

In summary, both long-term high-fat meals and a single highfat diet load can cause vascular endothelial injury and inflammation. Inflammation was severe during the early stage of ATH and high-fat meal 4-6 h after the load. And those research results are in line with previous related study. Nevertheless the mechanisms between high-fat diet load and inflammation and atherosclerosis are reported rarely. In general, healthy diets are particularly important for the health of the population or for those with progressive cardiovascular diseases. Unhealthy diets not only induce the occurrence and development of ATH, but also affect the stability of plaques. The 4th–6th-h after high-fat diets may be a high-risk period of vascular events, and thus particular attention should be paid to this period.

This work was funded by Shanxi Provincial Natural Science Foundation (2014011040-6).