Introduction: Regenerative treatment aimed to restore tooth supporting structure and its functional attachment through regeneration of cementum, periodontal ligaments and surrounding alveolar bone. Diode laser 940 nm wavelength has the potential to act as antibacterial and enhances wound healing. Material and methods: Case one; 30 years old male having infra bony pocket about (10-13 mm depth) at 16, 17, 26, 27, 36, 37, 46 and 37. The treatment was done by using 940 nm wavelength diode lasers; the output power was 800 mw, 50% Duty cycle in pulsed mode. Energy was delivered through optical fibre 300 um in diameter for 20s exposure time at each site of the pocket. The treatment period was three months’ time with weekly recall. Case two; 39 year old male with tilted 36, 37 (a pocket depth of 13 mm at tooth number 36-37) was treated by the same previously method and dose parameter for one month weekly recall.

Results: Restoring the periodontal support of teeth was clear with the stimulation of bone formation surrounding each affected tooth clinically through the absence of the pain and bleeding on probing symptoms. Moreover there was decreasing of the pocket depth which was measured by pocket measuring probe, intraoral X-ray and Orthopantamogram was used pre and post treatment.

Periodontitis is a progressive inflammation of the tooth supporting structures (gingiva, periodontal ligament and the surrounding bone).

It is usually irreversible inflammation but maybe arrested by treatment [1]. The major clinical signs are:

The presence of microbial plaque.

Periodontal inflammation manifested by redness and bleeding on probing.

Loss of attachment of alveolar bone [2].

The later causes bone destruction that forms the infrabony pocket which might be due to the squally of the inflammatory changes in the gingiva or due to trauma from occlusion or both [3].

It was concluded by Oliveira et al. that both red and infra-red laser phototherapy promote an enhancement of osteoblast Alkaline Phosphatase (ALP) and Matrix Metalloproteinase Protein (MMP’s) [7].

Stimulation or inhibition in cellular activities of any tissue through laser bio stimulation ruled by many factors. On the laser side; the incident wavelength, its power density, exposure time and mode of operation. While the targeted tissue; absorption coefficient and its refractive index at that incident wavelength in addition to the tissue temperature at time of treatment plus tissue contained, all have to be studied well before any operation. These case studies are trials to get the efficient laser parameter that enhances periodontal tissue regeneration without any surgical intervention to treat the infrabony pocket in human.

Male patient 30 year old, non-smoking, presented in the private clinic, his chief complaint was pain on chewing and bleeding on molar region area for the maxilla and mandible. No relevant medical history was present. On clinical examination the patient had good oral hygiene and deep pockets Table 1 for the pocket depth at 15, 16, 17, 26, 27, 36, 37, 46 and 37 region.

Table 1. Pocket depth for each region in case 1 before the treatment.

Pocket measuring probe was used to measure pocket depths and it was (7-13) mm depth and at some regions more than that as shown in Figure 1.

The case was diagnosed as localized periodontitis. Routine blood and X-ray investigation were performed.

Treatment started with general scaling and polishing for the upper, lower jaw due to the presence of calculus in addition to root planning (SRP) at the pocket region, oral hygiene instruction were given, too. Patient condition was assessed every one month by using pocket measuring probe to measure pocket depth and X-rays. In addition to one week recall to assess the oral hygiene maintenance by the patient, and a diode laser treatment was performed for each affected pocket.

The informed consent was signed by each patient in addition to the patient agreement to be treated by 940 nm laser according to the form as shown in Figure 2. 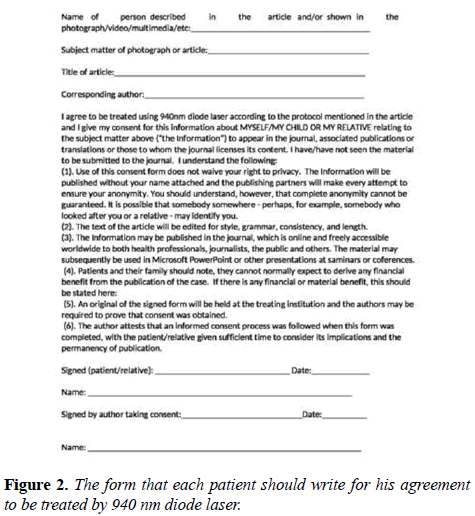 Figure 2. The form that each patient should write for his agreement to be treated by 940 nm diode laser.

No local anaesthesia was given during treatment. No antimicrobial agent was prescribed no periodontal dressing was used.

Treatment took three month with one a week recall for laser treatment, Night guard was not used through the period of treatment.

Laser biolase epic 940 nm wavelengths were used with an output power of 80 mw. In pulsed mode of 50% duty cycle the delivery system was an optical fibre of 300 um diameter, each surface of the pocket was irradiated for 20 second exposure time at each pocket. The treatment was repeated once a week.

39 old male, non-smoker with good oral hygiene. His chief complaint was pain on chewing in between tooth number 36, 37. He was treated previously by surgical excision to the lingual papilla between the previously mentioned teeth.

On x ray periapical view a deep pocket at 36, 37 regions was obvious due to vertical bone resorption. Pocket depth more than 13 mm was measured using pocket measuring probe. Root canal treatment was performed to tooth 36 due to the presence of deep filling with an obvious lamina dura on the mesial root of the tooth in addition to the dull pain that the patient was complaining of. Followed by laser treatment to the pocket region as previously mentioned case. There was an improvement with in the first month. The pocket depth was decreasing and no pain was present.

No adverse effect was recorded in both cases postoperatively; no antibiotic or analgesic was prescribed post operatively.

There was no pain or bleeding in the pocket region from the first visit in addition to the gradual reduction in the pocket depth according in between visits according to the Table 2.

With the absence of bleeding during probing the gingival pockets through the pocket measuring probe during the routine examination was obvious as shown in Figure 3. 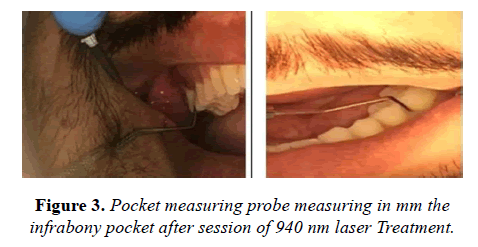 Orthopantamogram X ray (OPJ) was used once a month to assess the progress in the treatment Figure 4. 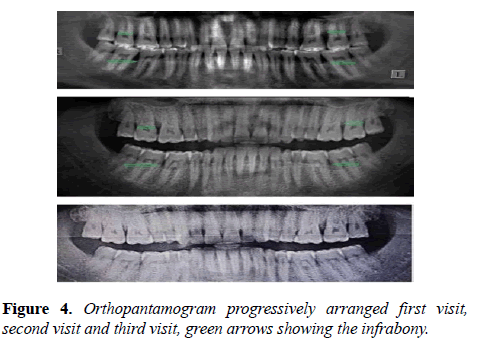 For more details in between visits periapical x ray was recommended Figure 5. 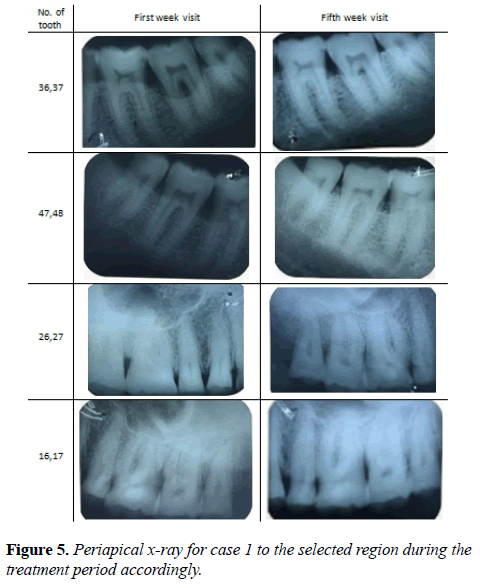 Figure 5. Periapical x-ray for case 1 to the selected region during the treatment period accordingly.

The OBJ was taken to the patient as shown in Figure 6 after 18 month of his last treatment visit. During the routine check-up there was 5 mm periodontal pocket at tooth number 26, 27. There was no complained by the patient of pain or bleeding from the periodontal ligament. The classical treatment of scaling and polishing was performed at the pocket site. 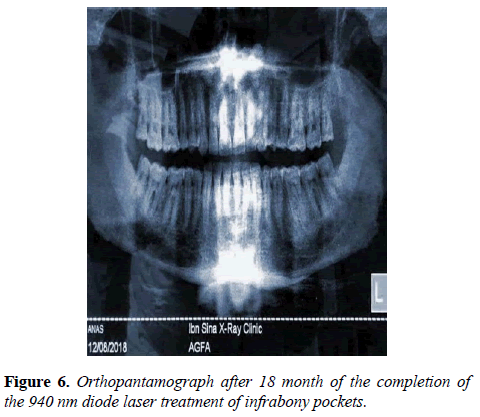 Figure 6. Orthopantamograph after 18 month of the completion of the 940 nm diode laser treatment of infrabony pockets.

The same previously mentioned precautions were taken for the first treated case. Clinical examination, using the pocket measuring probe and Periapical X-ray were used since the case is locally present bone resorption due to tilted teeth 36, 37 as shown in Figure 7. 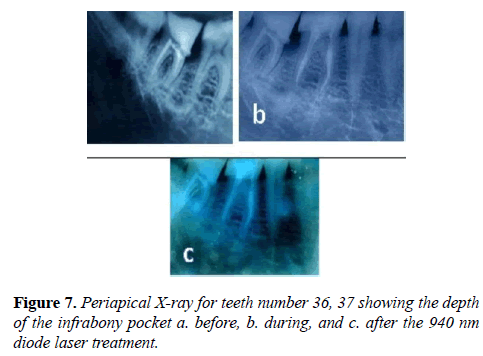 Figure 7. Periapical X-ray for teeth number 36, 37 showing the depth of the infrabony pocket a. before, b. during, and c. after the 940 nm diode laser treatment.

Laser-tissue interaction (i.e. the behaviour of light in the tissue) is a sensitive process that depends on the incident wavelength, the incident power density, mode of operation and the exposure time. In addition to the tissue content and its optical property like refractive index and absorption coefficient.

Andreas et al. reported in his review of regenerative periodontal treatment that there is always a chance of tooth loss due to progressive bone resorption after conventional treatment for deep pocket ≥ 6 mm in depth and bifurcation involvement. Conventional non-surgical or surgical treatment has usually been associated with formation of long periodontal attachment on almost the entire periodontally exposed and instrumented root surface rather than periodontal regeneration [11].

In this work we used 940 nm wavelength lasers at 56 W/cm2 and the results were encouraging to regenerate the periodontal tooth supporting structure.

940 nm wavelengths have an absorption coefficient in blood about 0.25 mm-1 scattering coefficient about 0.64 mm-1 for an optical extension of 0.86 mm-1 [12]. If we cancel the reflected part of the laser beam which is 0.34 mm-1 [13] that occur at the first interface then the diffused laser beam through the variable refractive index of the clotted blood, the remaining power seem to be enough to regenerate the periodontal support of the tooth structure after sterilization of the area, this finding is in agreement with [10,12,14].

Laser treatment using 940 nm diode lasers to treat periodontitis and infrabony pockets service as adjunctive treatment to the conventional scaling and polishing. Laser treatment should be considered as alternative to surgical treatment to regenerate periodontal support to human teeth.