Recall rate and incidence of congenital hypothyroidism: A 5-year experience of hospital-based study in Bahrain

Congenital hypothyroidism (CH) is one of the most common preventable causes of intellectual disability. It affects 1:2000 to 1:4000 new-born infants worldwide [1,2]. The clinical manifestations are usually subtle or not present at birth [3]. Different neonatal screening programs for CH have been implemented in both developed and some developing countries. It is estimated that only 1/4 of the worldwide birth population undergo screening for CH [4,5].

In many countries, different mass screening programs are performed for early diagnosis and treatment of CH [6], yet most have encountered problems such as high recall rate and therefore, more substantial numbers of falsepositive results are found, which carry a risk for unjustified anxiety and psychological harm in families. On the other hand, fewer false positive results increase physicians’ and parents’ trust, reduces families’ psychological stress, efficiently organize the medical staff members’ workload and reduce expenses by minimizing unnecessarily repeated laboratory tests [7,8]. In this study, we determined both CH incidence and recall rates based on our local neonatal population that was screened over the study period and redefined the cord blood thyrotropin-stimulating hormone (CBTSH) cut-off levels for identifying neonates at risk of CH.

This is a retrospective cross-sectional study that was carried out from January 2012 to December 2016 in Bahrain Defense Force Hospital. All inborn deliveries conducted during this period were part of the study. Primary CBTSH with backup T4 measurements were assayed on single specimens using the electrochemiluminescence immunoassay “ECLIA” by Cobase immunoassay analyzer (ROCHE Diagnostics, Germany) with a measurement range of 0.005 to 100 μIU/ml and 0.3 to 100 pmol/l for TSH and free T4, respectively. For confirmation, infants were recalled if cord blood TSH was >37.5 μIU/ml, and serum TSH and free T4 measurements were obtained at an average of five days after birth. Thyroid scans using Tc- 99m were requested to determine the underlying etiology. Clinical data were obtained for all positive cases included sex, gestational age, nationality, type of delivery and single or multiple gestations.

Table 2. Population incidence of congenital hypothyroidism in Bahrain from 2012 to 2016

Table 2 shows the number of neonates screened annually and number of true positive and false positive cases. No false negative cases were observed in this study and the overall incidence of congenital hypothyroidism during the study period was 1:1489 (Figure 2). 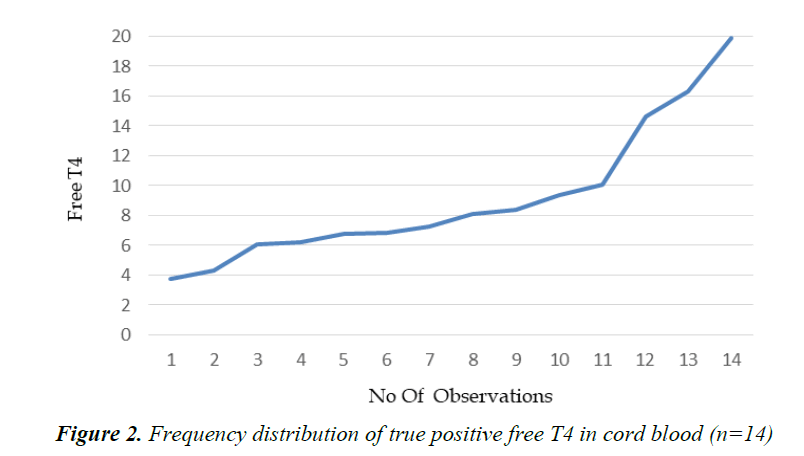 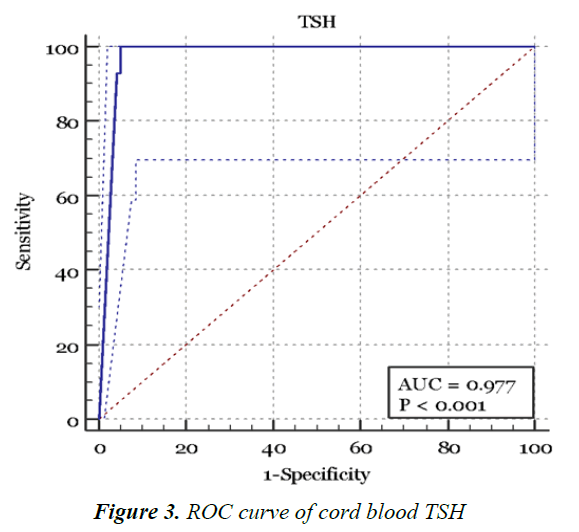 Table 5. Criterion values and coordinates of the ROC curve

The use of CBTSH as a screening tool for CH has been validated in numerous studies [11]. CBTSH values have been evaluated and compared with filter paper samples obtained via heel prick [12]. Hardy et al. [13] found CBTSH to be more sensitive than cord blood free T4 screening.

There are wide variations in screening strategies worldwide with regard to timing and methods of screening [14,15]. Primary TSH with backup T4 measurements is widely used in Europe, Japan, Canada, Mexico and the United States. Some programs in North America, Israel and the Netherlands also use primary T4 measurements and both methods use heel prick samples at 2 to 5 days after birth [5,16,17].

The use of CBTSH as a screening tool in developing Asian countries provides an attractive alternative because of its simplicity and accessibility considering the obstetric practice in which the majority of mothers are discharged within 24 to 48 h after delivery [14,18,19].

The lowest TSH value detected in confirmed CH cases was 94 μIU/ml, which is consistent with values from a Swedish study (100 μIU/ml) and from Najarn province in Saudi Arabia (117 μIU/ml) [26,27].

The ROC curve identified a new cutoff CBTSH value as 93 μIU/ml. When used, it would improve the efficiency of the test and lead to less false positive cases, and hence lower recall rates, which in return will significantly improve the cost-effectiveness of this screening tool and minimize concerned parents’ anxiety for whom their infants are identified as at risk [6,8].

Study limitations included the retrospective design and use of primary TSH and backup free T4 measurements, which may miss cases of central hypothyroidism and cases with delayed TSH elevation seen in low birth weight and very low birth weight infants (LBW and VLBW, respectively) and infants with thyroid-binding globulin (TBG) deficiency. An approach using simultaneous TSH and free T4 measurements seems to be the preferred ideal method to diagnose CH [16,28].

To date, there is no universal TSH cutoff point to screen for CH. Each country should collect enough data to determine a credible and feasible screening method and cutoff values aiming to achieve low false positive results and recall rate. CBTSH screening per se will detect neonates with primary CH, yet cases with central hypothyroidism and those with delayed TSH elevation can be missed. Our study supports setting higher CBTSH cut-off values based on our population findings and recommends simultaneous cord free T4 measurements as the ideal screening approach.