#These authors have equally contributed to this work.

Cell migration is a central process by which multicellular organisms can be properly established and maintained. Lamellipodia are an actual motor that is critical for cell migration. Rab8b, a member of Rab small GTPase, is known to play a role in secretion, endocytosis and ciliogenesis. However, it remains unknown whether Rab8b is involved in cell migration. In the present study, we show that Rab8b is ubiquitously expressed in the mouse tissues including kidney. We further show that depletion of Rab8b in the kidney epithelial cell line mIMCD-3 resulted in reduced velocity of cell migration, which is likely associated with defective formation of lamellipodia. Our data suggest Rab8b plays an important role in cell migration and lamellipodia formation.

Cell migration is the process by which cells move from one location to another on certain substratum through distinct motility modes, such as mesenchymal, amoeboid or collective migration. This cell activity is a fundamental event to establish and maintain proper organization of multicellular organisms [1]. The collective cell migration is a hallmark of the tissue remodeling events that underlie embryonic morphogenesis, wound repair and cancer invasion [2]. Failed or defective cell migration can result in many defects during development or life-threatening abnormalities, such as immunosuppresion, autoimmune diseases, defective wound repair, or tumor dissemination [3,4]. Lamellipodia are actin cytoskeletal projections on the leading edge of the cells and they are an actual motor which pulls the cell forward during cell migration [5,6]. Lamellipodia formation has long been known to be actin-dependent and controls directed cell migration [7].

The Rab family of small GTPases plays important roles in regulating vesicular transport in all eukaryotes. In the past decade, a line of evidences have linked some members of the Rab family, such as Rab5, Rab8, Rab21 and Rab25, to the mechanistic aspects of cancer cell migration and invasiveness [8]. Rab8b was originally cloned from rat basophilic leukaemia cell line, RBL.2H3, and encodes a 207-aa protein Rab8b which is highly homologous (82%) to Rab8a with distinct C-terminal domain [9]. Rab8b is mapped on chromosome 9 and spans around 76 kb of genomic DNA that contains 8 exons and 7 introns. Northern blot analysis revealed that Rab8b is ubiquitously expressed in different tissues of rat with highest levels of expression of Rab8b in the spleen, testis and brain while Rab8a exhibited a different expression pattern [9]. The first interacting partner of Rab8b, termed TRIP8b, was identified a few years later, which might define a role of Rab8b in the regulated secretary pathway in AtT20 cells [10]. Otoferlin, another interacting partner of Rab8b, is defective in a human autosomal recessive deafness form, suggesting that Rab8b may be also involved in this disease [11]. Recently, human RAB8B was identified to be an essential evolutionary conserved component of Wnt/β-catenin signaling through the regulation of LRP6 activity and endocytosis [12]. Rab8b together with Rab8a is essential for several apical transport pathways but insufficient for ciliogenesis [13]. More recently, it was reported that Rab8b, like Rab7 and Rab24, has a key role in autophagosome maturation [14]. Rab8b is also specifically involved in the trafficking of West Nile Virus (WNV) particles from recycling endosomes to the plasma membrane [15]. Rab8b was found to be associated with the actin, intermediate filament, and microtubule cytoskeletal networks, and participates in adherens junction dynamics in the testis [16]. Although Rab8a, the isoform of Rab8b, was shown to be involved in cancer cell migration and invasiveness, it remains unknown whether Rab8b itself has a similar role in this cellular process.

In the present study, we investigated the role of Rab8b in cell migration and lamellipodia formation in a kidney epithelial cell line. We also examined the expression profile of Rab8b in mouse tissues.

Total protein was extracted from 1 month-old mouse tissues. Tissue lysates were denatured with 6 × sample buffer and boiled at 100°C for 10 min. The samples were then loaded into 12% SDS-PAGE. After gel running, proteins were electrotransferred onto a nitrocellulose membrane (Bio-Rad), followed by blocking with 5% non-fat milk in TBST (1 × TBS with 0.05% Tween-20) for 1 h at room temperature (RT). The membrane was then blotted with primary antibody, Rab8b (Proteintech, Cat. No. 11792-1-AP) or GAPDH, for 2 h at RT. The membrane was then washed with TBST for 10 min/3 times followed by incubation with the secondary antibody (goat anti-mouse or goat anti-rabbit) for 1 h at RT. After washing with TBST for 10 min/3 times, membrane-bound antibody was detected with ECL (enhanced chemiluminescence) kit.

The viruses produced in the media were then collected to infect mIMCD-3 cells (80~90% confluence) with additional fresh DMEM/F12 media containing polybrene. Puromycin selection (2 μg/ml) was started at ~48 h post-transduction. Based on the knockdown efficiency, Rab8b KD4 cells at earlier passage were used for later experiments.

The Rab8b knockdown cells and scramble control cells were cultured with DMEM/F12 media in 6-well plate until reaching confluent. The wound was created along the diameter of the well with a 20 μl tip. The cells were washed with DPBS twice and fresh DMEM/F12 media were replenished. Images were taken along the wound at the same spots at different time points, including 0 h, 6 h and 9 h. Prior to imaging at each time point, the cells were washed with DPBS to remove the floating or dead cells.

To examine the expression profile of Rab8b in mice, we collected samples from mouse heart, brain, lung, liver, muscle, kidney, spleen, thymus and small intestine. Tissue lysates were blotted with specific antibody of Rab8b. The data showed that Rab8b is ubiquitously expressed in mouse tissues with variable levels. In the brain, lung, liver, kidney, spleen and small intestine, Rab8b is highly expressed, while in the heart, muscle and thymus, Rab8b has much less abundance, especially in the heart (Figures 1A and 1B). 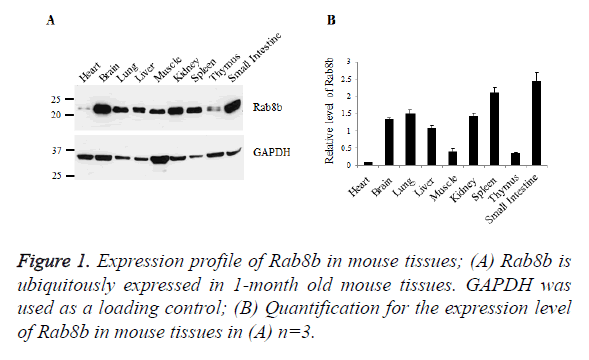 Knockdown of Rab8b in the kidney epithelial cells

To investigate the function of Rab8b in the kidney, we knocked down Rab8b in a mouse inner medullary collecting duct cells (mIMCD-3), a commercially well-characterized mouse kidney cell line. The cells were transduced with lentiviruses bearing shRNAs which are targeted to distinct sites of Rab8b transcript and then stably selected with puromycin. The Western blot data show that Rab8b KD4 has the highest knockdown efficiency, compared with other 3 targets (Figures 2A and 2B). We further performed immunostaining to confirm the knockdown efficiency for Rab8b KD 4. The data show that Rab8b in highly depleted in the knockdown cell line compared with the scramble control cells (Figure 2C). These data suggest that the Rab8b-depleted cell line was successfully established. 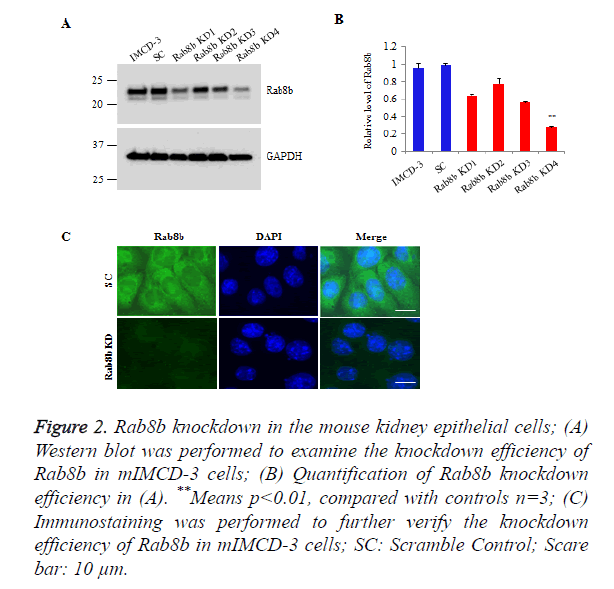 Rab8b is known to be involved in multiple cellular processes, while it remains unknown whether it is involved in cell migration. To address this question, we performed wound healing assay in the Rab8b knockdown cell line.

A similar size of cell wound was created in the Rab8b knockdown and its control cells. The velocity of wound healing was monitored at three different time points, including 0 h, 6 h and 9 h. 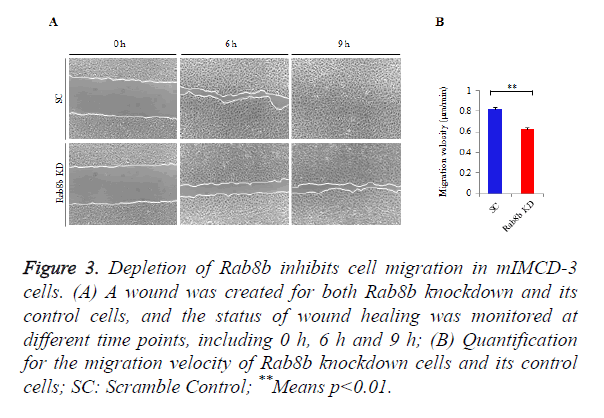 Figure 3. Depletion of Rab8b inhibits cell migration in mIMCD-3 cells.
(A) A wound was created for both Rab8b knockdown and its control cells, and the status of wound healing was monitored at different time points, including 0 h, 6 h and 9 h;
(B) Quantification for the migration velocity of Rab8b knockdown cells and its control cells; SC: Scramble Control; **Means p<0.01. 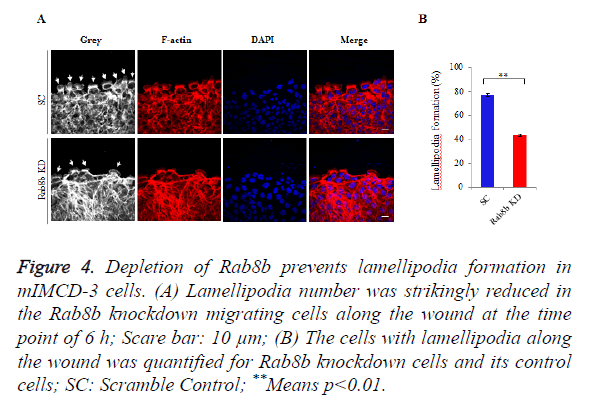 Rab8b was first discovered in the rat basophilic leukaemia cell line and it is ubiquitously expressed in all types of animal tissues. The transcript of Rab8b was shown to be more abundant in the heart, brain, spleen, liver, skeletal muscle and testis of the rats while it was less in the lung and kidney [9]. Another study from different group showed that Rab8b can be detected in the brain, testis, heart, kidney and spleen of the rat with highest level in the brain and lowest level in the heart [16]. In our study, we found that at the protein level Rab8b is more abundant in the brain, lung, kidney and spleen of the 1- month old mouse. The discrepancy is likely resulted from the difference in species, animal age and/or post-transcriptional modification.

The homologous protein of Rab8b, Rab8a, was previously shown to promote the formation of new surface extensions through reorganization of actin and microtubules, and play an important role in directed membrane transport to cell surfaces in fibroblasts [17]. This process is likely monitored by a Rab8- specific activator Rabin8 [18]. Rab8a was also shown to play a key role in membrane traffic during neuronal process outgrowth and identified as a critical component of the cellular machinery that specifically drives the local delivery of AMPA-type glutamatergic receptors (AMPARs) into synapses [19,20]. By a yeast two-hybrid assays and Fluorescent Resonant Energy Transfer (FRET) techniques, Rab8a, but not Rab8b, was identified to be an interacting partner of myosin Vb, which is important in recycling a variety of receptors [21]. Rab8a is known to be involved in regulating the actin-dependent movement of melanosomes [22]. In line with this finding, scientists also found that Rab8a regulates the formation of actin containing structures such as filopodia, lamellipodia, protrusions and primary cilia, and is known as one of the important regulators for cell migration, epithelial polarization and ciliogenesis [23]. Based on this line of evidences, we hypothesized that Rab8b might also have a function in regulating the formation of lamellipodia and cell migration since it is an isoform of Rab8a. We knocked down Rab8b in a kidney epithelia cell line, and examined the velocity of cell migration and the capability of lamellipodia formation. The data from our present study strongly support our hypothesis. Our findings are important advance for the understanding of Rab8b in addition to its roles in endocytosis, ciliogenesis and autophagosome maturation [12-14].