Pulmonary Alveolar Microlithiasis (PAM) is a rare, chronic lung disease with bilateral intraalveolar calcium and phosphate deposition throughout the lung parenchyma with predominance to lower and midzone. Although, etiology and pathogenesis of PAM is not fully understood, the mutation in SLC34A2 gene that encodes a sodium-phosphate co-transporter in alveolar type II cells resulting in the accumulation and formation of microliths rich in calcium phosphate (due to impaired clearance) are considered to be the cause of the disease. Chest radiograph and highresolution CT of thorax are nearly pathognomonic for diagnosing PAM. HRCT demonstrates diffuse micronodules showing slight perilobular predominance resulting in calcification of interlobular septa. We present a case of 30 years old female diagnosed with this rare disease.

A 30 years-old women presented with a 1 year history of progressive shortness of breath on exertion and dry cough. At physical examination, auscultation of the lungs revealed coarse crackles. Cardiac auscultation was normal, and no cyanosis, clubbing and lymphadenopathy or peripheral edema was observed. There was no history of smoking, occupation or previous known pulmonary disease. On routine blood examination, blood counts and serum chemistries were found to be normal. Pulmonary Function Tests (PFT) showed a mild restrictive ventilatory defect. The sputum was negative for AFB and CBNNAT was also negative for MTB. Human immunodeficiency virus testing was negative as well.

The chest plain films revealed a diffuse symmetric dense bilateral micronodular pattern (Figure 1). Based on this finding, HRCT scan was obtained, revealing diffuse ground glass attenuation and septal thickening, more pronounced in lower pulmonary regions, with calcifications along the interlobar septa and subpleural regions (Figure 2). The patient underwent a fiberoptic bronchoscopy with bronchoalveolar lavage and transbronchial lung biopsy. The lavage fluid was negative for tuberculosis or fungi. Microliths were not found. Histology revealed round, concentrically laminated microliths in the alveoli associated with slightly thickened interstitial septa, consistent with the diagnosis of PAM. 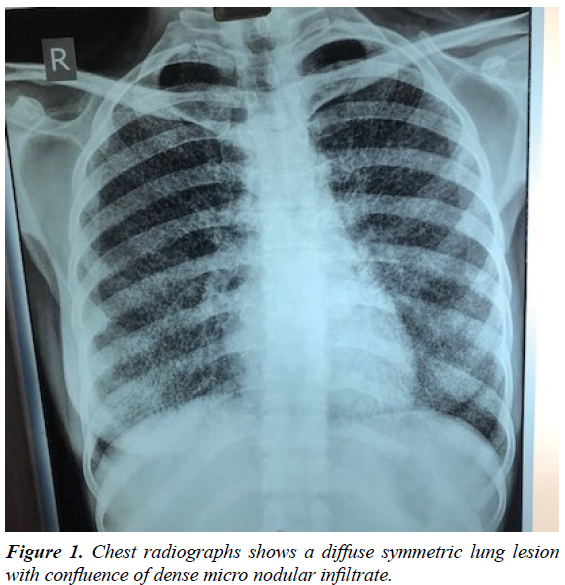 PAM is a rare disease that presents chronic evolution, poorly defined etiology and pathogenesis, and is characterized by numerous small calculi (denominated calciferites, calcospherites or microlites) within air spaces [1-6]. Patients may remain asymptomatic for many years and usually become symptomatic between the third and fourth decades [3,5]. At clinical presentation patients usually demonstrate a lung disorder with restrictive pattern. There is progressive deterioration of the pulmonary function and death usually occurs in mid-life because of respiratory failure associated with cor pulmonale. Mean age at the time of diagnosis in the literature is 35 years and apparently there is no important predominance of gender [2,4]. The disease has autosomal recessive inheritance pattern. Recently, a few reports have described the role of mutation in the type IIb sodium-phosphate cotransporter gene (SCL34A2 gene), which is expressed in type II alveolar cells. It is believed that the dysfunction in SCLC34A2 may reduce the clearance of the phosphate, leading to the formation of microliths. Besides that, some authors demonstrated the usage of measuring the serum concentration of surfactant protein-A (SP-A) and surfactant protein-D (SP-D) in patients with PAM. Alveolar type II cells and Clara cells produce these two proteins in the lungs. The diffuse parenchyma fibrosis, consequent to PAM, causes an increase in permeability, leading to an increase in the levels of these two proteins in the blood. Therefore, SP-A and SP-D measurement may be an alternative to monitor the progression and activity of the disease [6].

Nevertheless, no effective treatment for end stage PAM currently exists, with the exception of lung transplantation. Transplantation should be considered in cases where either severe respiratory failure or right heart failure are present [4].

In the radiological diagnosis of PAM, chest radiographs usually reveal diffuse, bilateral areas of micronodular calcifications (‘‘sand storm’’) that predominate in the middle and lower lung areas [2-6]. The heart borders and the diaphragm are usually obliterated. The chest radiographs of our patient showed a diffuse symmetric lung lesion with dense micronodular aspect, corroborating the pattern described in the literature.

The HRCT findings in patients with alveolar microlithiasis vary considerably [2-6]. Subpleural linear calcification, confluent and diffuse calcified nodules and dense consolidations are also a common finding. Calcifications along the bronchovascular bundles and at the central region of the bronchovascular tree can also be seen [2-6]. Recently, it was described the unique characteristics of the mosaic pattern seen in alveolar microlithiasis, due to deposition of calcipheriths within the peripheral lobular parenchyma, adjacent to the septa.

Some authors consider this pattern very specific and even pathognomonic of PAM on the HRCT scan.

In conclusion, PAM is a rare disease that can affect young patients, with chronic and deteriorating evolution. Clinicians should be aware of its existence and the radiological features associated. Clinicians should have in mind that some findings seen in PAM, such as nodular calcifications, can be found in other diseases like tuberculosis, metastatic osteosarcoma, amyloidosis and silicoproteinosis. Besides that, dense consolidations can also be found in metastatic pulmonary calcification, talcosis and amiodarone lung toxicity. In this way, associated CT findings and clinical features should always be correlated, since these diseases have different kinds of presentation and evolution. 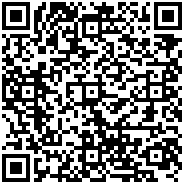