Amikacin (aminoglycoside) antibiotics frequently used in the treatment of Gram-negative bacterial infection in neonates, but its usage restricted due to nephrotoxicity and ototoxicity as a major side effect. The current study was concluded to examine the possible potential effect of piceatannol on nephrotoxicity induced by Amikacin in neonatal rats. Swiss Albino (Wistar) new born rats were used for the current study. The new born rats were divided into the following groups: Group I: rats treated with saline; Group II: treated with Amikacin (1200 mg/kg); Group III: treated with Amikacin+piceatennol (10 mg/kg); Group IV: treated with Amikacin+piceatennol (20 mg/kg), respectively. The antioxidant and renal parameter were scrutinized. Amikacin control group rats showed the enhanced level of Nitric Oxide (NO) and Malonaldehyde (MDA), which was significant (P<0.001) restore to the level near to the normal control treatment with piceatannol. Amikacin group demonstrated the low level of Glutathione Peroxidase (GPx) and the treatment with piceatannol significantly increase the level of GPx at dose dependent manner. The Catalase (CAT) and Superoxide Dismutase (SOD) level were not significant in the all group of rats. The level of the insulin like growth factor-1 was higher in the Amikacin control group rats, which was significantly reduced by the piceatannol at the dose-dependent manner, but the level of insulin like growth factor-1 was not reached near the normal control. During the histopathological observation, amikacin control rats showed the renal toxicity via injury in the tubular epithelial and expansion of renal necrosis. The piceatannol group rats confirmed the protective effect on the renal toxicity via improvement the renal damage induced by amikacin. Amikacin-induced nephrotoxicity is associated with oxidative stress and is confirmed by histopathological and biochemical findings. Piceatannol can be beneficial renal protective agents for modulating the amikacin-induced nephrotoxicity in neonates.

Aminoglycoside antibiotics such as amikacin frequently used in the treatment of gram-negative bacterial infection in the neonatal intensive care unit [1]. AK commonly used anti-bacterial due to their high anti-bacterial effectiveness, low resistance, fast onset of action, synergy with beta-lactam antibiotics and low costs. Since the clinical uses of AK may be restricted by the expansion of nephrotoxicity, it is important to identify the risk aspects that frequently concerned with a high occurrence of renal toxicity. AK induces renal dysfunction mechanism still unknown [1]. The renal dysfunction side effects of AK have been recognized in various species of experimental animals. Several experimental studies had confirmed that generation of the free radical play a significant role in the pathogenesis of nephropathy and it has been shown that renal toxicity might be prohibited with several antioxidants [2].

In the current experimental study, we aimed to scrutinize the beneficial role of piceatannol (98% pure) against amikacin-induced nephrotoxicity and to investigate the effects of biochemical, antioxidants and histopathology alteration on neonatal rats.

The current investigation was executed under the guidelines provided by the Experimental Animal Laboratory and approved by the Animal Care and Use Committee of our institution.

Firstly, a preliminary experimental study was executed to estimation the appropriate dosage to formulate nephrotoxicity to new born rats. After selecting the dose, the new born rats were randomly allocated into following groups (n=6).

Group I rats received the saline for 3 days. AK (1200 mg/kg) was dissolved in the distilled water and intraperitoneally administered to the new born rats.

The biochemical parameters such as urea and creatinine was estimated using the diagnostic kit (Sigma Aldrich, USA) via following the procedure provided by the manufacture’s [3,4].

All group rats were sacrificed using the excess of anaesthesia. Both kidney samples of all group rats were successfully removed, washed, weight, decapsulated and divided into 2 longitudinal pieces. Right, kidney samples were placed in the formaldehyde (40%) solution for histopathological examination using the light microscope. The left kidney samples were washed using the physiological saline for the estimation of antioxidant parameters viz., Superoxide Dismutase (SOD), Catalase (CAT), Glutathione Peroxidase (GPx), Glutathione (GSH), Nitric Acid (NO), respectively [5-8]. Renal tissue was homogenized in phosphate buffer saline (pH=7) using the tissue homogenizer. Cell debris, unbroken and nuclei cells were sedimented via centrifuged at 3000 rpm for 15 min at 4˚C. After humanization, the tissue samples immediately performed the analysis the biochemical parameters.

The accumulation of AK in renal tissue supernatant was estimated using the available commercially kits via using the fluorescence polarization immunoassay. The tissue MDA concentration was measured from the homogenate via using the double heating method of Kara et al., [9]. The fundamental principle of the current mechanism generated the colour reaction of the thiobarbituric acid with MDA. Firstly, the solution was prepared and cooled using the tap water and its absorbance was estimated using the spectrophotometer. The MDA concentration in the renal tissue was estimated to calculate the absorbance coefficient of MDA-TBA complex and the concentration was presented as nmol/g protein.

Determination of CAT and GPx

The colorimetrically used for the estimation of NO content using the Griess reaction. Griess reagent reacted with nitrite to create pink to dark pink colour after incubation the reaction mixture for 10 min. The content of NO was estimated via calculate the absorbance at 540 nm and expressed as micro molar of protein, were determined using a standard NaNO2 solution.

The SOD content was determined in the supernatant according to use the reported method of Kumar et al. [10-12]. The determination of SOD content is based on the reduction of Nitroblue Tetrazolium (NBT) inhibition via the xanthine/ xanthine oxidase system as a superoxide generator. The ethanol phase of the supernatant was used for determination of SOD activity, after adding the ethanol/chloroform (1.0 mL) mixture was added to the same volume of sample and centrifuged the sample at 15000 rpm for 5 min. The activity of SOD was presented as U/g protein.

The concentration of IGF-1 was estimated by using the hydrochloride acid- ethanol extraction Radioimmunoassay (RIA), using the human IGF-1 for labelling, according to the reported method of Sjoberg et al. [13].

Kidney samples of half of the rats were fixed in the buffered formalin (10%) and then place in fresh formalin solution and embedded in paraffin solution, sectioned at 5 mm and hematoxylin-eosin use for the staining. The light microscope was used for identification of semi quantitative evaluation of renal tissues. Tissues were scrutinized for inflammatory cell infiltration, tubular epithelial modulations (desquamation, dilation, necrosis, vacuolization, casts and atrophy), glomerular and oedema changes. All the histopathological parameters were graded as follows:

Grade ++ (moderate) = change at different foci throughout the kidney

In the current experimental study, AK treated rats showed the altered level of biochemical and antioxidant parameters. It also induced the acute renal toxicity, evidenced by significantly increase the renal lipid peroxidase estimated as NO and MDA as shown in Figures 1 and 2. AK control group rats showed the increased level of NO and MDA in the renal tissue as compared to normal control, which was significantly (P<0.05) decreased by the piceatannol at effective dose-dependent manner. AK group rats demonstrated the reduced level of GPx as compared to control as shown in Figure 3. 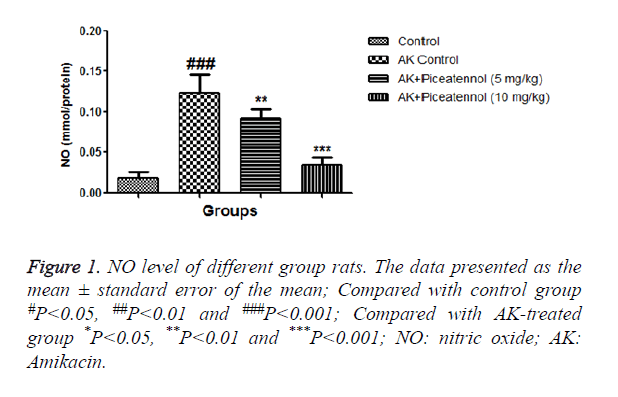 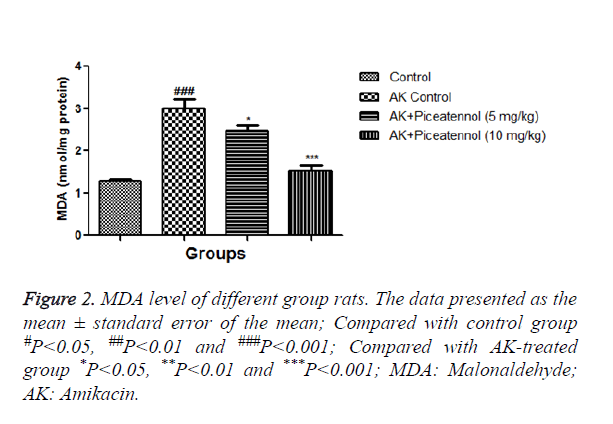 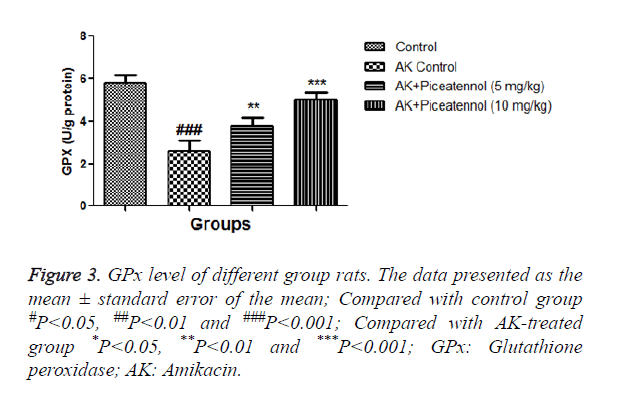 AK group rats were treated with piceatannol significantly (P<0.05) improved at effective dose-dependent manner. Conversely, the level of CAT and SOD were remained almost same to controls at the end of the experimental study as shown in Figures 4 and 5. 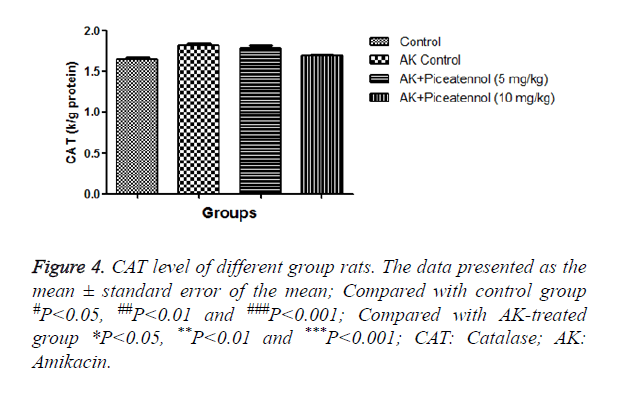 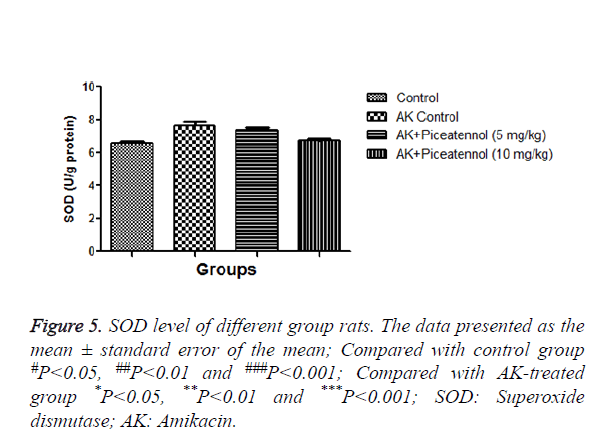 AK control group rats increased IGF-1 as compared to controls and the level of IGF-1 was significantly reduced by the piceatannol at dose-dependently as shown in Figure 6. Table 1 showed the histopathological changes in the different groups. 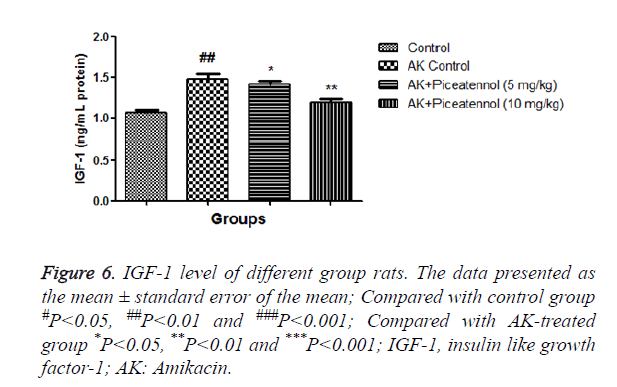 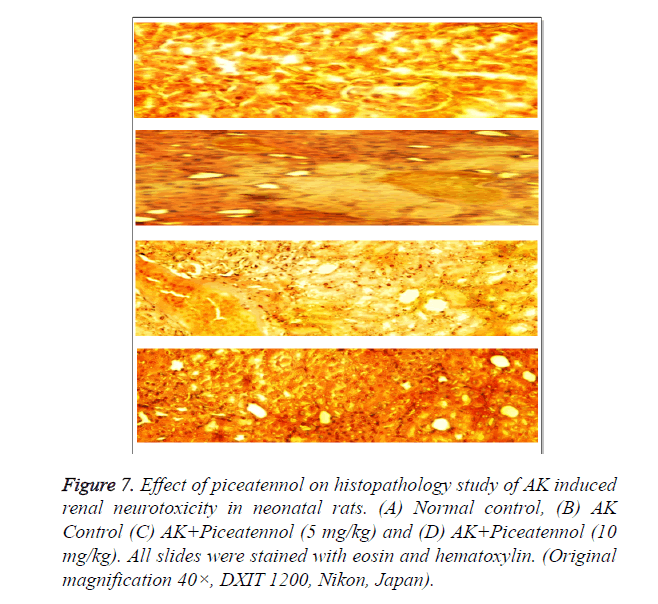 Various drugs routinely used in paediatric and prenatal medicine, which offended induce the nephrotoxicity [14]. Some of the drug such as aminoglycosides induces the nephrotoxic side effects via three common mechanisms: decrease renal blood flow, inhibited Glomerular filtration, and renal tubular toxicity. Aminoglycosides antibiotics including amikacin have been used as an antibacterial drug against several gram-negative infections [15]. Since the use of amikacin may be limited due to the expansion of nephrotoxicity, it is important to be aware of those risk factors linked with a greater occurrence of renal injury. AK induces the renal toxicity via damage the primer site of the proximal renal tubular cell. The side effect (nephrotoxic) of AK antibiotics has been recognized in various species of experimental animals via over generation of free radicals, which cause lipid peroxidation by demolishing the unsaturated fatty acid in the cell membrane.

Several researchers have used various methods of measuring the renal injury to scrutinize the relative sensitivity of the kidney to AK as well as the effect of dose and age. Several investigations showed that the AK induces the renal toxicity via generation of free radical and reactive oxygen species. Various studies revealed that antioxidant treatment has ameliorated AK induced renal toxicity. The aim of the current study was to scrutinize the beneficial effect of piceatannol on AK induced nephrotoxicity in neonatal rats. Before starting the experimental study, a preliminary experiment study was executed to conclude the appropriate dosage of AK to make nephrotoxicity to new born rats.

The result of the current investigation, we observed the increased MDA level in AK control rats, which was significantly decreased by piceatannol at dose dependently. Intraperitoneal administration of AK markedly induces the nephrotoxicity and significantly alters the renal parameter and marked changes in the renal histopathology. It is also scrutinized AK induced renal injury and evaluated the preventive effect of piceatannol using biochemical and oxidative markers (CAT, SOD, MDA, NO, IGF-1 and GPX) and morphological alteration of renal as determined under light microscopy, commonly exploited to screen the expansion of renal injury. AK control group rats showed the tubular injury via interstitial oedema, tubular vacuolization, and tubular dilation and confirmed the renal injury. Also, histopathological results were parallel with biochemical findings in AK group rats and this revealed that free radicals may have a vital role in renal nephrotoxicity and piceatannol are beneficial via their antioxidant mechanism.

In the renal system, transportation or secretion of urine xenobiotic wastes product and xenobiotics metabolite via proximal tubule. Aminoglycosides are very well known to be nephrotoxic and take part in the endothelial damage via inhibiting the density and structure of fenestrated endothelium. NO synthase produced the endothelin singling cascade in renal. Both endothelin and NOS were present in the nephron segments, such as proximal tubules. The various research showed that enhance the level of NO and MDA found during the renal damage due to overproduction of free radicals and oxidative stress. NO production has been implicated in renal disease and the action of several nephrotoxic compounds. The current study showed that renal tissue NO and MDA content significantly increased in AK control group rats, which was significantly decreased by piceatannol.

Moreover, GPx and CAT using the same substrate for their activities, in the current investigation, AK group rats showed the reduced level of GPx, but the level of CAT was almost unchanged because we performed the short time of experimental study and also used the new born rats. We collect the sample after 3 days of experimental study, due to collection the data after a short time. CAT was near to normal control but we thought that if we increase the time, we could find the growing level of CAT. GPx is the first step enzyme and protects the cell form the H2O2; consequently, CAT takes part in the enzymatic reaction.

In conclusion, the possible mechanism to induce the nephrotoxicity via AK may be the tubulointerstitial damage linked to the oxidative stress. The nephrotoxicity induced by the AK, further confirmed by the biochemical and histopathological findings. AK control group rats showed the increased level of NOP and MDA as well as reduce the level of GPx as compared to normal control. Piceatannol treatment significantly altered the biochemical and antioxidant parameters and claims as a preventive effect for AK induced nephrotoxicity induced in neonatal rats. In this regards, to find the preventive effect of piceatannol in neonatal rats, more experimental and clinical studies are recommended.