Cisplatin ototoxicity is a major dose-limiting factor in the treatment of several neoplastic diseases. Oxidative stress might play an important role of pathogenesis of cisplatin ototoxicity. The aim of this study was to examine protective effect of mirtazapine against cisplatin-induced ototoxicity and DNA damage. A total of 16 albino male guinea pigs were assigned into 3 groups: control, cisplatin (10 mg/kg, i.p.), cisplatin (10 mg/kg, i.p.) plus mirtazapine (10-15 mg/kg, p.o.) for 7 days. After sacrification of all animals by high-dose anesthesia, the cochleae were removed and subjected to histological (the left ear) and biochemical (the right ear) analyses. Cisplatin administration increased malondialdehyde content by 3.01-fold, depressed glutathione level by 64% and elevated 8- hydroxy-2-guanine level by 140% in the cochlear tissue as compared to the control group (p<0.05 for all). Mirtazapine administration reversed the effect of cisplatin administration on the cochlear measurements. Mirtazapine administration alleviated damages caused by cisplatin on the outer hair cells, spiral ganglion cells and Reissner membrane. In conclusion, mirtazapine alleviated cisplatin-induced oxidative stress and DNA damage through exerting antioxidant effect in guinea pigs cochleae. Antioxidant property of mirtazapine may increase effective usage of cisplatin in cancer patients.

Although cisplatin is one of the most widely used chemotherapeutic agent for various forms of cancers, its clinical use has been limited due to a number of side effects including ototoxicity, nephrotoxicity, neurotoxicity and myelotoxicity [1,2]. Reports indicate that an elevation in hearing threshold can occur in up to 75-100% of patients [3]. The main targets of the ototoxic effects seem to be the outer hair cells (OHC) in the organ of Corti, the spiral ganglion cells (SGC), Reissner’s membrane, and the cells of the stria vascularis in the basal part of the cochleae. Destruction starts in a progressive manner, from the base to the apex [2,4].

Reactive oxygen species (ROS) may trigger the process of apoptosis caused by cisplatin in cochlear structures through initiating tissue damage [5], as reflected by elevated 8-hydroxy-2-deoxyguanine (8-OH-Gua), a DNA oxidation product [6,7]. Increased ROS, superoxide, and hydrogen peroxide in cochlear tissues generate a toxic environment for the cells [1,8-10]. Superoxide can react with nitric oxide and generate peroxynitrite. It can also be transformed into hydrogen peroxide, which can form the hydroxyl radical through catalysis by iron. Peroxynitrite and hydroxyl radical contribute to the degenerative process of the cochlear structures [1,11]. The harmful effect of these free radicals is reduced by antioxidant defense mechanism continuously or eliminated completely [12-14].

Antioxidant treatment may prevent the disease or delay the onset of diseases. Mirtazapine is used for major depression. Studies coping with protective effects of mirtazapine on stomach [8], kidney [15] and brain [6] after applying indomethacin, cisplatin and ischemiareperfusion, respectively are available. In these experiments, mirtazapine was shown to repress the production of enzymatic and non-enzymatic oxidation indicators. We therefore investigated if mirtazipine exerts cytoprotective effects against cisplatin-induced ototoxicity and DNA damage in the albino male guinea pigs.

Eighteen albino male guinea pigs weighing 1.5-1.8 kg were obtained from the Medical Experimental Research Centre, Ataturk University and used upon the approval by the local ethic committee on the use and care of laboratory animals. The animals were reared under a light-dark photo period of 12:12 h at 21oC and fed a standard commercial diet and given water ad libitum.

These applications were applied as follows: Because mirtazapine was delivered via distilled water, guinea pigs assigned to the cisplatin and control groups were given distilled water by gastric lavage. When cisplatin was applied one hour after One hour after mirtazapine, guinea pigs assigned to the mirtazapine and control groups were applied to saline because of dissolving cisplatin in saline. Thus, all animals were loaded with equal volume of carrier.

Approximately 0.2 g whole cochlear tissue was homogenized in ice with 2 ml buffers (containing 1.15% potassium chloride, pH=7.5 for malondialdehyde (MDA) analysis and phosphate buffer for the other analyses). Then, they were centrifuged at 4°C, 10,000 rpm for 15 min and the supernatant was used for total glutathione (tGSH), 8-OH-Gua, and guanine (Gua). (Biochemical substances were purchased Sigma (Munich, Germany) and Merck (Darmstadt, Germany).

The amount of GSH in the total homogenate was measured according to the method of Senlac and Lindsay with some modifications [16]. The sample was weighed and homogenized in 2 ml of 50 mM Trish buffer containing 20 mM EDTA and 0.2mM sucrose at pH 7.5. The homogenate was immediately precipitated with 0.1 ml of 25% trichloroacetic acid, and the precipitate was removed after centrifugation at 4,200 rpm for 40 min at 4◦C. 1500 μl of measurement buffer (200 mM Tris-HCl buffer containing 0.2 mM EDTA at pH 7.5), 500 μl supernatant, 100 μl 5,5-dithiobis (2- nitrobenzoic acid) (DTNB) (10 mM) and 7900 μl methanol were mixed and vortexed and then incubated for 30 min in 37°C. Chromogen, DTNB forms a yellow-colored complex with SH groups. The absorbance was measured at 412 nm using a spectrophotometer. The standard curve was obtained by using reduced glutathione.

The cochlear tissue MDA content was determined by the spectrophotometric method [17]. Briefly, the supernatant obtained from hemolyzate samples (0.2 ml) were mixed thoroughly with 0.8 ml of phosphate buffered saline (pH 7.4) and 0.025 ml of butylated hydroxytoluene solution. After addition of 0.5 ml of 30% trichloroacetic acid, the samples were placed on ice for 2 h and then centrifuged at 2000 x g at 25°C for 15 min. The absorbance was determined at 532 nm. MDA level was expressed as nmol/mg protein.

DNA was isolated from the cochlear tissue according to Shigenaga et al.’s modified method [18]. Samples (50- 200 mg) were homogenized at 4°C in 1 ml of homogenization buffer (0.1 M NaCl, 30 mM Tris, pH 8.0, 10 mM EDTA, 10 mM 2-mercaptoethanol, 0.5% (v/v) Triton X- 100) with 6 passes of a Teflon-glass homogenizer at 200 rpm. The samples were centrifuged at 4°C for 10 min at 1000 x g to pellet nuclei. The supernatant was discarded, and the crude nuclear pellet re-suspended and rehomogenized in 1 ml of extraction buffer (0.1 M Tris, pH 8.0, 0.1 M NaCl, 20 mM EDTA) and re-centrifuged as above for 2 min. The washed pellet was re-suspended in 300 μl of extraction buffer with a wide-orifice 200-μl Pipetman tip. The re-suspended pellet was subsequently incubated at 65°C for 1 h with the presence of 0.1 ml of 10% SDS, 40 μl proteinase K, and 1.9-ml leukocyte lysis buffer. Then, ammonium acetate was added to the crude DNA sample to give a final concentration of 2.5 mol/L, and centrifuged in a micro centrifuge for 5 min. The supernatant was removed and mixed with two volumes of ethanol to precipitate the DNA fraction. After centrifugation, the pellet was dried under reduced pressure and dissolved in sterile water. The absorbance of this fraction was measured at 260 and 280 nm. Purification of DNA was determined as A 260/280 ratio 1.8.

Approximately 50 mg of DNA was hydrolyzed with 0.5 ml of formic acid (60%, v/v) for 45 min at 150°C (19). The tubes were allowed to cool. The contents were then transferred to Pierce micro-vials, covered with Kleenex tissues cut to size while securing by a rubber band, and frozen in liquid nitrogen to remove formic acid. Before analysis by HPLC, specimens were re-dissolved in the eluent (final volume 200 μl).

The cochleae were fixed in 10% neutral buffered formalin for 24 h at room temperature. The tissues were then decalcificied by submerging in 10% EDTA at room temperature for 7 d. Following rinsing under tap water for 3 h samples were refixed 10% neutral buffered formalin for 24 h. The tissues were embedded in paraffin and 5 μmsections were stained with haematoxylin and eosin for histopathology under light microscope (Olympus BX51, Olympus America Inc., Melville, NY) equipped with a camera (Olympus DP 71). Loss of OHC in the organ of Corti, shrinkage of intermediate cells and edema in the stria vascularis, enumeration-shrinkage-vacuolization of cell in SGC and epithelial cell swelling in the Reissner membrane were attained.

No pathological finding was observed in organ of Corti, SGC, stria vascularis, Reissner’s membrane in the control group (Figure. 1, panel I). 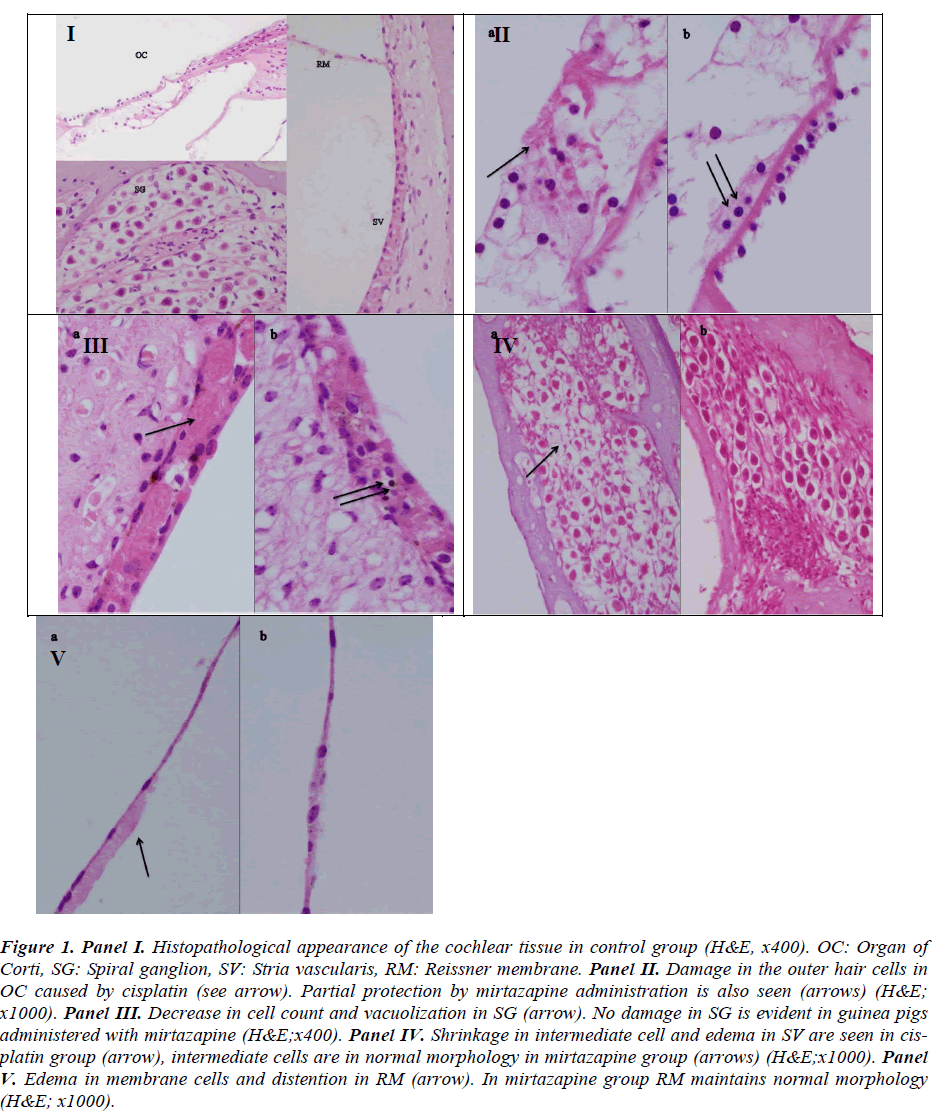 Despite the development of new regimens and dosage limits, the ototoxic effect of cisplatin treatment is still unavoidable. Unfortunately hearing loss is still a major dose-limiting side effect presenting as bilateral, irreversible and progressive sensorineural hearing loss leading to a decrease in quality of life cancer patients [2,22].

A number of experimental studies have attempted to find out an ideal otoprotectant by administration of antioxi- dants against ROS at an early stage in the ototoxic pathways [2,3]. Steroids, especially transtympanic administration of dexamethasone against cisplatin-induced ototoxicity presents different magnitudes of protective effect. Hill et al. [23], Daldal et al. [24] and Murphy et al. [25] reported that intratympanic dexamethasone injections may provide some protection against cisplatin-induced ototoxicity in an experimental model. Paksoy et al [2] observed a significant protective effect from intratympanic dexamethasone and vitamin E injections on cisplatin-induced ototoxicity in rat. Waissbluth et al. [22] used systemic dexamethasone against cisplatin ototoxicity and did not find significant protection. Other agents, including erdosteine [1], amifostine [26], resveratrol [27-29] and salicylate [30] administered systemically as well as Nacetylcysteine [31] and thiosulfate [4] administered transtympanically had variable effects in experimental conditions. To date, there is no FDA- approved product that completely prevents or reduces cisplatin ototoxicity.

The pathophysiology of cisplatin-induced ototoxicity is not completely understood. It has been postulated that cisplatin destroys primarily the cochlea especially OHC [32], leading to excessive production of ROS in the organ of Corti, stria vascularis, spiral ligament, and SGC [28]. ROS have been shown to be implicated in the process of apoptosis caused by cisplatin in cochlear structures. Cisplatin administration in vivo has been shown to deplete cochlear tGSH an endogenous antioxidant, and decrease the activity of antioxidant enzymes in the inner ear such as superoxide dismutase, glutathione peroxidase, glutathione reductase, and catalase [33]. GSH plays an important role in a number of critical cellular processes, including providing the major line of defense for the protection of cells from oxidative and other forms of stress [6]. GSH can scavenge free radicals, reduce peroxides and be conjugated with electrophilic compounds. It thereby provides cells with multiple defenses against both ROS and their harmful products.

MDA is one of the end products of lipid peroxidation resulting from attacks of free radicals. An increase in MDA tissue level reflects degrees of cellular damage [34]. MDA in its turn causes more advanced cellular injury. Cisplatin treatment can cause a marked organ damage, characterized by a significant increase in tissue MDA level [35].

Mirtazapine is used for major depression. It has been shown that mirtazipine repress the production of enzymatic and non enzymatic oxidation indicators while increasing the antioxidant parameters [6,8]. Mirtazapine also blocks 5-hydroxytriptamine2/3 (5-HT2/3) receptors specifically. Blockade of these receptors may contribute to the protective properties of mirtazapine, because some of the substance-induced neurotoxicities are mediated via 5-HTergic transmission involving 5-HT2/3 receptors [36,37]. Bilici et al. demonstrated gastroprotective effects of mirtazapine in indomethacin-induced ulcer, as manifested by elevation in gastric GSH and depression in gastric MDA and myeloperoxidase [8]. The antioxidant effect of mirtazapine on cerebral tissue of rats subjected to cisplatin-induced oxidative stress was also reported [6]. In the present experiment, aggravated MDA content in cisplatin- administered guinea pigs was suppressed by mirtazapine administration (Table 1).

The oxidative stress, which is created by excessive production of ROS leads to damage not only lipids, but also protein and DNA. Hydroxyl radicals remove hydrogen from nucleic acids or react with double binds, resulting in DNA damage. ROS induce several types of oxidative DNA damage in studies employing induction by cisplatin [38]. The disturbance of DNA repair enhances the accumulation of 8-OH-GUA [39]. Normally there is a balance between demolition and construction of DNA, causing a small amount of DNA damage in a healthy person. [40]. The overproduction of 8-OH-Gua is also thought to be responsible for apoptosis [41]. Similar increase is shown in cancer patients (e.g., pancreas and breast) [42,43] as well as in vitro conditions employing cancer cell lines (e.g., lung, colorectal) [44,45]. In the present experiment, mirtazapine administration reversed DNA damage, caused by cisplatin administration, as reflected by decline in 8-OH-Gua (Table 1). Indeed, it was shown that mirtazapine may be an effective treatment option in managing cancer patients with multiple distressing symptoms, including nausea and sleep disturbance [46].

In conclusion, mirtazapine prevented ototoxicity of cisplatin through alleviating oxidative stress and DNA damage. Mirtazapine could be considered supplementary drug to increase dosage and residue side effect of cisplatin in cancer treatment. Due to increased frequency of depressive disorders in cancer patients, combined usage of cisplatin with mirtazapine may provide dual benefits.