Children’s with Developmental coordination disorder (DCD) have a significant defect in gross and fine motor skills and handwriting skills are a challenge to rehabilitate. Conventionally, visual perception and kinesthetic orientation is a pre-requisite skill to achieve in the rehabilitative process. We propose a tripod grasp strategy in achieving goals in Children with DCD with poor fine motor skill acquisition.

Handwriting training in children with a DCD is challenging to teachers and therapists handling children with DCD. The possible difficulties in the progression of rehabilitation in these cases is the lack of the gold standard assessment tool to quantify the handwriting difficulty among children with DCD in Indian context, Assumptions on poor handwriting skill are the poor fine motor control, floppy muscle tone and week intrinsic muscles of hand.

The incidence of DCD is reported to be 6-8% in Kattankulathur village [1,2]. In the rehabilitation of handwriting skill, perceptual training and postural adaptation is an integral part [3] prior to strengthen the muscles of hand and wrist.

The associated visual perceptual deficit can be a setback in children with DCD, which can always impose a threat in achieving handwriting skill [4,5]. The objective of this case report is to describe a low-cost rehabilitation technique that can be used without loading the child with bilateral coordination skill training and other complex motor training to the child with DCD and help the child to achieve academic success.

A 6-year-old boy suspected as DCD in DCDQ assessment form filled up by her teacher and her father. The clinical presentation of the child was poor visual perceptual skills and handwriting skill. However he has an intact sensation. He used to have frequent academic failure and difficulty in getting pass grade in qualifying examination in school and he used to isolate himself from peer group as because of his untidy handwriting and clumsiness. He appears psychologically depressed too.

His parents when questioned in detail regarding his academic activity and writing ability, they revealed that their child have difficulty in maintaining speed of writing. He usually met with problems in grasping the pencil or pen, sweating hands, shivering hands while initiating writing task. They searched for the appropriate diagnosis about their child ’ s problems as majority of the therapist and others who coined their child is having motor neuron disease (Figures 1-3). 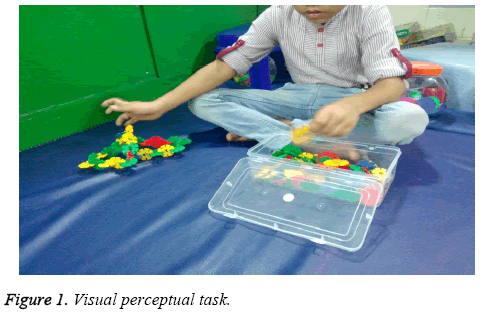 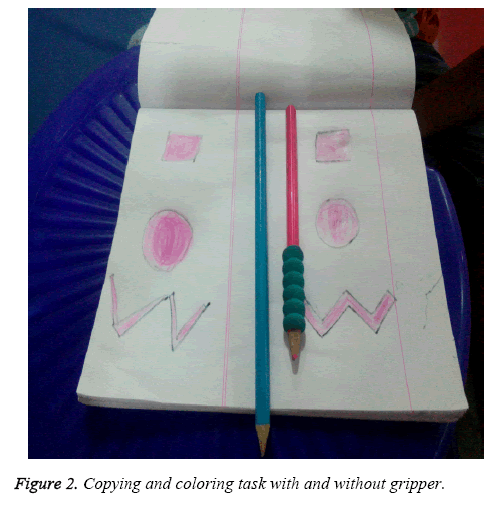 Figure 2. Copying and coloring task with and without gripper. 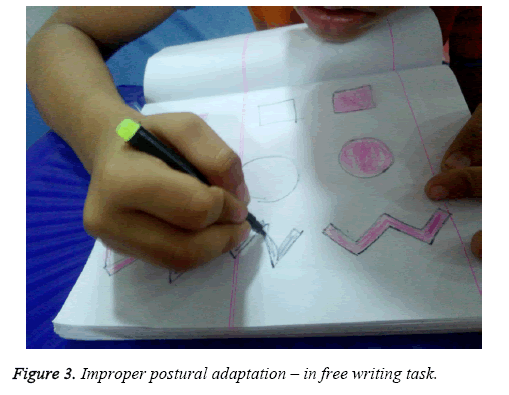 The initial assessment of the neurological level and the Manual muscle test (MMT) was grade five in all the muscles of both the lower limbs.

The part of motor training task was followed from the first week (Table 1).

After initial baseline assessment, on the first week, the child with DCD is trained for enhancing their writing skill to execute fine motor control. Free writing task were instituted by the therapist. Initial training is given with the gripper-pencil, which is holed by tripod grasp by the child. However the movements at wrist and shoulder should be avoided and the child is instructed to start free writing by allowing him to write whatever he wants, therapist starts the timer and records the speed and acuity. 1 attempt was allowed for free writing and coloring task. If the child fails in 1 attempt, then the child is motivated to paint with color pencil inside the pre-designed shapes.

The handwriting skill training protocol can be safe and effective in improving writing and sequencing. Since the reeducation of writing pattern is successful only with prior visual perceptual skill training and checking the visual acuity of the child at the baseline is needed. [6]. This strategy could be a crucial intervention in promoting orientation to writing despite the comorbidities.