Prognostic significance of advanced age in patients with intrahepatic cholangiocarcinoma: A retrospective study of the SEER database

This study analyzed the prognostic significance of age in patients with intrahepatic cholangiocarcinoma (ICC). Cases diagnosed with ICC between 1988 and 2009 were extracted from the Surveillance, Epidemiology and End Results (SEER) database as the primary cohort. The enrolled patients were divided into 2 groups: the elderly group (≥ 65 y of age) and young group (<65 y of age). The 1, 3 and 5-y cancer-specific survival (CSS) rates were obtained. Kaplan-Meier curves were applied and multivariable Cox regression models were built to analyze the risk factors for prognosis. A multifactorial, integrative nomogram for prognostic prediction was formulated by software R. Cases diagnosed in 2010 from the SEER database were enrolled as the validation cohort. In total, 2161 patients were ultimately included in the primary cohort. The 1, 3 and 5-y CSS rates were 34.3%, 12.5% and 6.5% in the elderly group and 49.8%, 21.3% and 11.5% in the young group, respectively. Univariate (P=0.001) and multivariate (P<0.001) analysis revealed a significant difference in CSS between the two groups. Clinical variables including age, pathological grade, primary tumor stage, lymph node invasion and metastasis were integrated to formulate the nomogram for prognostic prediction, and its predictive power was higher than that of conventional TNM staging. The results were confirmed in the validation cohort. In conclusion, aging could provide important prognostic information for ICC patients and further serve as a critical stratification parameter for the choice of treatment.

Intrahepatic cholangiocarcinoma (ICC) is the second most common primary liver cancer after hepatocellular carcinoma (HCC) [1,2]. During the past three decades, its incidence and mortality have increased rapidly worldwide [3]. Clinically, hepatectomy remains the cornerstone of the curative treatment for this fatal malignancy [4].

However, only a few patients can survive long-term after diagnosis because of a high probability of loco-regional recurrence and distant metastasis [5]. Based on critical clinical parameters such as tumor number, vascular invasion and lymph node status, the 7th American Joint Committee on Cancer (AJCC) staging system is currently used for ICC clinical staging and prognostic evaluation.

Circulating biomarkers such as carbohydrate antigen (CA) 19-9 and carcinoembryonic antigen levels should also be considered for predicting ICC outcome [6]. However, due to their relative rarity, other parameters clinically applicable for ICC prognostic prediction are still lacking and require further exploration.

Compared to HCC, ICC shows distinct etiological features; one of which is that it occurs more commonly in elderly patients and age>65 y is considered a general risk factor for cholangiocarcinoma [7,8]. Aging plays a vital role in the initiation and progression of cancer development [9].

In recent years, several large cohort investigations have reported the potential link between aging and ICC [10-12]. However, an explicit correlation between aging and prognosis remains to be clarified. On this point, most of the previous studies were limited by small sample sizes or they did not adjust for potential confounding factors [13-18].

Additionally, those studies merely focused on patients receiving hepatic surgery, but they did not consider the nonoperative group when analyzing the prognostic significance of age. In consideration of the low resectability of ICC, especially in elderly patients, the impact of aging on clinical outcome merits further investigation in large cohorts.

In this study, we used data from the Surveillance, Epidemiology and End Results (SEER) database to analyze the prognostic value of age in ICC patients while controlling for background diseases and other confounding factors.

This was a retrospective observational study using the SEER cancer database. The current SEER database represents 18 population-based cancer registries in the USA. This database contains no personal identifiers and produces public-use data for cancer studies. The National Cancer Institute SEER*Stat software (version 8.3.2, http://seer.cancer.gov/seerstat) was used to access the SEER database.

The date of last follow-up was defined as the last date the patient was contacted by the hospital or seen by the doctor, or the date of death. The primary endpoint was cancer-specific survival (CSS), which was calculated from the date of diagnosis to the date of cancer-specific death. Deaths attributed to ICC were defined as events, and deaths attributed to other causes were considered as censored data. To investigate the short-term and long-term survival outcomes, 1, 3 and 5-y CSS was calculated.

This research was based on the publicly available data from the SEER database and the data-use agreement was assigned the reference number 12945-Nov2016. Patients’ informed consent was not required because no direct interaction with patients was performed and there was no personal identification. This research was conducted in compliance with the Declaration of Helsinki and approved by the Institutional Review Board of Huashan Hospital, Fudan University, and Shanghai, China.

Variables including age, gender, race, pathological grade, primary tumor stage, lymph node invasion and metastasis were extracted from the SEER database. All patients were restaged according to the AJCC Cancer Staging Manual (7th Edition, 2010). Patients diagnosed with ICC were divided into two subgroups according to age: group A (≥ 65 y of age) and group B (<65 y of age).

We used SPSS version 19.0 (SPSS Inc., Chicago, IL, USA) to conduct the statistical analyses. χ2 tests were used to analyze the correlation of age (elderly and young) with other clinicopathological features. Kaplan-Meier methods were used to generate survival curves, and univariate analyses were performed by log-rank tests between the two groups. Multivariate Cox regression models were applied to analyze risk factors for survival outcomes. All tests were two-sided and P<0.05 indicated statistical significance.

Construction and validation of the nomogram

Based on the results of multivariate Cox regression analysis, a nomogram was generated by statistical computing software R version 3.3.1 (https://www.r-project.org/) with the RMS package. A final model selection was conducted using a backward step-down process in accordance with the Akaike information criterion [19].

One thousand bootstrap resamples were applied to calculate the concordance index (C-index) and formulate the calibration curves, which assessed the performance of the nomogram [20]. Comparison between the established nomogram and conventional tumor staging system (AJCC 7th edition staging) was performed by the C-index [21]. A larger C-index implied a more accurate predictive model for prognosis [6]. Calibration curves were conducted by comparing nomogram-predicted survival with observed survival both in the primary and validation cohorts.

In the primary cohort, a total of 2161 eligible patients with ICC in the SEER database were identified during the 21-y period (1988-2009), which included 1202 cases (55.6%) in group A and 959 (44.4%) in group B. No significant difference was shown in main demographic and clinical variables between groups A and B. Additionally, 414 patients were ultimately included in the validation cohort. Patients’ characteristics are summarized in Table 1.

Impact of age on short and long-term survival 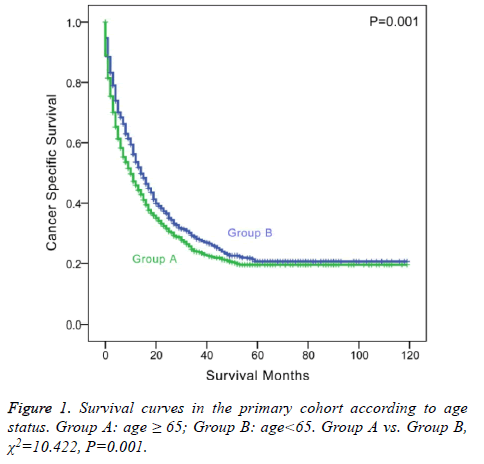 Stratified analysis of effect of age on CSS

We further analyzed the impact of age on CSS stratified by different races. In Caucasians, elderly patients showed poorer prognosis compared with young patients (P=0.011). In other races, elderly patients were also associated with poorer survival outcome (P=0.036). We also analyzed the correlation between age and CSS stratified by different cancer stages. In both the early stage (AJCC stage I or II) and advanced stage (AJCC stage II or IV), elderly patients showed poorer survival (P<0.001; P=0.005). Additionally, we analyzed the relationship between age and CSS stratified by different therapy methods. In surgical patients, old age were associated with shorter survival time, although not significantly (P=0.125). In nonoperative patients, old age was a significant prognostic factor (P=0.005).

A nomogram that integrated all the independent prognostic factors was established (Figure 2). To use the nomogram, an individual patient’s clinicopathological parameters were located on each variable axis, and a line was drawn upward to the “points” axis to determine the score for each variable. The sum of these scores was located on the “total points” axis. A line was drawn downward to determine the likelihood of 1, 3 and 5-y CSS. 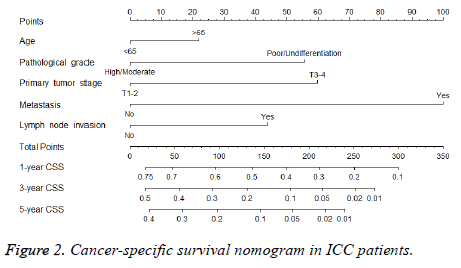 Validation of the predictive accuracy of the nomogram

The predictive power of the established nomogram and AJCC staging system was compared. In the primary cohort, the Cindex of our nomogram to predict CSS (0.652, 95% CI 0.630-0.674) was higher than that of the conventional AJCC stage (0.613, 95% CI 0.591-0.635), although this difference was not significant (P=0.187). The C-index was similar in the validation cohort (0.655, 95% CI 0.621-0.689). Additionally, calibration curves were formulated to assess the performance of the nomogram. The calibration curves in the primary cohort showed optimal agreement between prediction and observation in the probability of 1, 3 and 5-y CSS (Figure 3). In the validation cohort, the results also indicated that the nomogrambased prediction was in good agreement with actual observed survival (Figure 4). 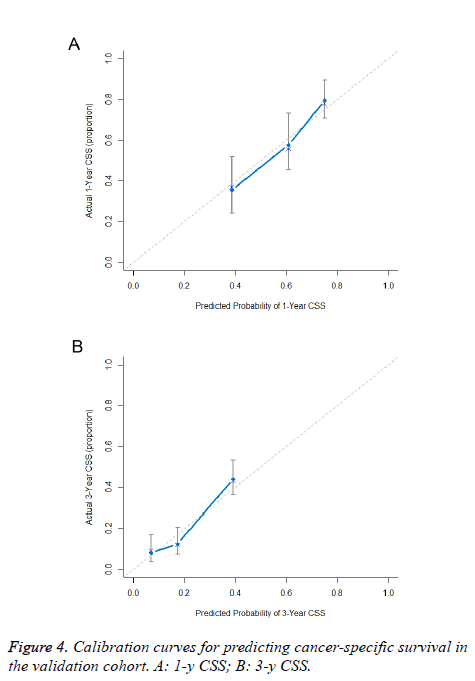 The concept that advancing age acts as a critical risk factor for cancer has been increasingly highlighted [22,23]. During aging, multiple mechanisms, both intrinsic (accumulation of DNA damage) and extrinsic (decreases in adaptive immunity; age-related pro-tumorigenic inflammatory microenvironment), converge to drive carcinogenesis [9]. Intriguingly, recent studies have also demonstrated that the aged microenvironment can drive cancer metastasis and therapeutic resistance in preclinical models, raising the possibility that aging is involved in cancer metastasis and that aged cancer patients might have poorer prognosis [24,25]. Here, based on the SEER database, we found that aged ICC patients (≥ 65 y) showed poorer shortterm and long-term survival than their younger counterparts, especially among patients who did not undergo surgical treatment. Furthermore, by integrating aging and other independent prognostic factors, we established a novel prognostic nomogram for CSS, which demonstrated superior predictive power than the conventional AJCC staging system.

Late-stage cases represent a larger percentage of ICC patients who are not amenable to radical resection and have a more dismal outcome, with chemotherapy or radiotherapy being recommended as adjuvant therapy [1]. Intriguingly, in our cohort of non-operative ICC patients, the CSS rates in the elderly group were significantly worse than those in the younger group. Considering the low resectability of ICC, this result is also of clinical relevance, which indicated that the aged non-operative patients were a higher-risk subgroup for cancer progression. All of this evidence points to old age as a bona fide parameter predictive of clinical outcome for ICC after surgical resection and for other therapies.

In light of the emerging role of aging in predicting the CSS of ICC, we support its potential application in optimizing traditional staging models for ICC, such as the AJCC staging system. In recent years, prognostic nomograms were found to be accurate predictive models for cancer patients. Previous prognostic nomograms for ICC were all constructed to predict the OS of ICC after curative resection [6,30,32]. Here, we constructed a novel prognostic nomogram to predict the CSS of all ICC patients irrespective of treatment strategies, which may be helpful for clinical decision-making.

In conclusion, although the prognostic systems for ICC are in a state of evolution with several novel models, our study demonstrated that aging could also provide important prognostic information for ICC patients and further serve as a critical stratification parameter for treatment choice.

This study was supported by Shanghai Sailing Program (No. 17YF1401600) and the NSFC General Program (No. 81672820, No. 81472677 and No.81672365). The authors acknowledge the efforts of the SEER Program tumor registries in the creation of the SEER database. The contents of this paper are the sole responsibilities of the authors.