Background: Helicobacter pylori (Hp) infection was prevalent all over the world, but the Hp eradication rate remained low. This randomized controlled double blinded study aimed investigated the effectiveness and safety of probiotics combined with the standard regimen in eradicating Hp infection.

Methods: Consecutive adult patients who had C14 breath test positivity (>100) and endoscopically diagnosed as chronic active gastritis or gastric ulcer were enrolled and randomized into control group (n=111) and experimental group (n=111). Demographic and clinical characteristics were recoded. The Hp eradication rate and adverse events were compared between two groups.

Conclusion: These findings proved that the probiotics can improve the effectiveness and safety of the standard Hp eradication regimen.

Helicobacter pylori (Hp) infection has been proved to be an important etiological factor for multiple gastric diseases including chronic gastritis, peptic ulcer, gastric mucosal associated lymphoma and gastric cancer [1,2]. Although great progress has been made on the diagnosis and treatment for Hp infection, its prevalence remains high both at home and abroad [3,4]. In our country, it was estimated that around 60% of the population has Hp infection [5]. Most of the patients with Hp infection are asymptomatic, and some patients only have some nonspecific symptoms like abdominal distention and dyspepsia, which can be easily neglected. However, Hp infection can increase the risk of gastric and esophageal cancer [6]. Thus, it is necessary to guarantee the eradication of Hp infection.

Consecutive adult patients who had C14 breath test positivity (>100) and endoscopically diagnosed as chronic active gastritis or gastric ulcer in our outpatient department of gastroenterology from May 1, 2017 to October 1, 2017 were enrolled. Those patients who were unwilling to participate in this study, pregnant or lactating, or had severe cardiac, hepatic, renal or malignant diseases, or previously took anti-Hp drugs including antibacterial drugs, bismuth agents and proton pump inhibitors were excluded.

The demographic (age, gender, etc.) and clinical characteristics (main symptoms, etc.) were recorded. All the patients gave their written informed consents. This study was approved by the Ethic Committee of Xinjiang military area general hospital and the protocol was in accordance with the Declaration of Helsinki. 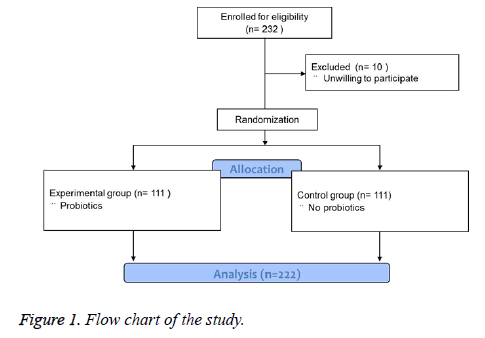 Figure 1: Flow chart of the study.

The main outcome was the effectiveness rate of Hp eradication, which was defined as the negativity of C14 breath test at 1 month after the eradication.

The second outcome was the rate of adverse event including taste disorders, anorexia, abdominal distension, diarrhoea and constipation during the study period.

The continuous and categorical data were presented as mean (range) and percentage (%), and the differences between the two groups were compared by independent student t-test and chi-square test if applicable, respectively.

A two tailed P value less than 0.05 was considered to be statistically significant.

Hp infection has been important risk factors for gastritis, peptic ulcer and gastric cancer. The overall prevalence of Hp infection remained high and it can reach as high as 60% in China. In recent years, with the application of antibiotics in the eradication of Hp, drug resistance and micro-environmental changes could cause the ineffectiveness of the regimen and the increase of the adverse events [9]. Probiotics can benefit the human healthy by regulating the immune function and medicating the normal functional activities, especially in the gastrointestinal tract [10]. The potential molecular mechanism may be involved in the anti-oxidative and anti-inflammatory activities which are able to protect the gastric mucosa, suppress the inflammatory and immune response and rebalance the micro ecosystem after Hp infection [11]. Seen from this, the combination of probiotics and the standard Hp eradication regimen may improve the Hp eradication rate [12].

In this study, our findings proved that probiotics can significantly improve the effectiveness of the standard regimen and decrease the incidence of adverse events. The effectiveness rate of experimental group was obviously higher than that of the control group (94.6% vs. 84.7%, P=0.041). The total incidence of the adverse events in experimental group was obviously decreased compared with that in control group (P=0.023). Although the incidences of taste disorders and anorexia were comparable between the two groups, the incidences of abdominal distention, diarrhoea and constipation in control group were greatly decreased in experimental group (all P values<0.05). Taste disorders and anorexia were mainly associated with the regimen itself, while abdominal distention, diarrhoea and constipation were closely correlated with the intestinal micro ecosystem, which can be regulated by the administration of probiotics. Our results were consistent with previous studies [7,13,14]. In vitro experiment showed that the probiotics can inhibit and kill Hp and prevent the release of interleukin-8 [15]. In addition, the probiotics can alleviate the gastric mucosal inflammation caused by Hp infection and decrease the incidence of antibiotics associated diarrhoea [16].

There were still limitations in this study. First, all the patients were from one single center, and those who had ever received such Hp eradication regimen were excluded. Second, there may be other factors influencing the therapeutic efficacy of the Hp eradication like dietary factors and the like, which have not been evaluated.

Taken together, our findings supported that the probiotics can be introduced to the current Hp eradication standard regimen, which improved both the therapeutic effectiveness and safety. Future large scale multi-center investigations are also needed to validate the role of probiotics in the eradication of Hp.