Prevalence of viral hepatitis B, C and Delta, syphilis and hiv in the prison population in the closed penal system of the western Amazon

Introduction: The prison population is considered vulnerable to sexually transmitted infections (STIs) related to conditions of confinement, social marginalization, drug dependence, low socioeconomic status and poor health service conditions. The Studies with institutionalized population shows that most subjects had not performed any testing during their lifetime, or if they had, they had done so infrequently, resulting in underreporting of cases and lack of data revealing the real prevalence of these diseases in the prison population. In the Brazilian West Amazon, where the prevalence of viral hepatitis, mainly B and Delta, are high, specific studies in the prison population are extremely relevant in order to describe their epidemiological profile and justify the promotion of public health policies that improve the quality of life of the institutionalized.

Objective: This study aimed to detect the prevalence of viral hepatitis B, C and Delta, HIV and syphilis in the male prison population in a closed penal system.

Conclusion: The results show an at-risk population with behaviors that favor transmission and maintenance of the intramural and extramural chain of transmission, upon their reinsertion into future society. It highlights the need to apply and improve public health policies specific to the prison population.

The prison population is a vulnerable group for infectious diseases, mainly sexually transmitted infections (STIs) such as HIV, syphilis and viral hepatitis. These pathologies are directly related to the practice of unprotected sex and sharing of needles with high chances of parenteral-sexual transmission, representing a public health problem with social and economic repercussions [1-4].

Due to difficulties in accessing health services and a lack in public health policies directed at institutionalized individuals, testing for the diagnosis and treatment of sexually transmitted infections in the penitentiary system is still limited. Studies with the institutionalized population show that most subjects had not performed any testing during their lifetime, or if they had, they had done so infrequently, resulting in underreporting of cases and lack of data revealing the real prevalence of these diseases in the prison population [2,5,6].

As a result of the vulnerability associated with the lack of research directed towards incarcerated individuals, specific studies have been carried out in several regions of Brazil to determine the role of incarceration in maintaining the intra- and extramural transmission chain of sexually transmitted infections [7,8].

In the Brazilian West Amazon, where the prevalence of viral hepatitis, mainly B and Delta, are high, specific studies in the prison population are extremely relevant in order to describe their epidemiological profile and justify the promotion of public health policies that improve the quality of life of the institutionalized [5].

Considering the importance of the topic, the present study aimed to characterize the prevalence of viral hepatitis B, C and Delta, HIV and Syphilis in the male prison population in a closed penal system in Porto Velho, Rondonia.

A cross - sectional quantitative study was conducted to investigate the prevalence of and factors associated with the transmission of sexually transmitted infections in the prison population. The study was approved by the Research Ethics Council at the Tropical Medicine Research Center of Rondônia, under CAAE no. 38428.1147.0000.0011, and was developed between August 2016 and May 2017. 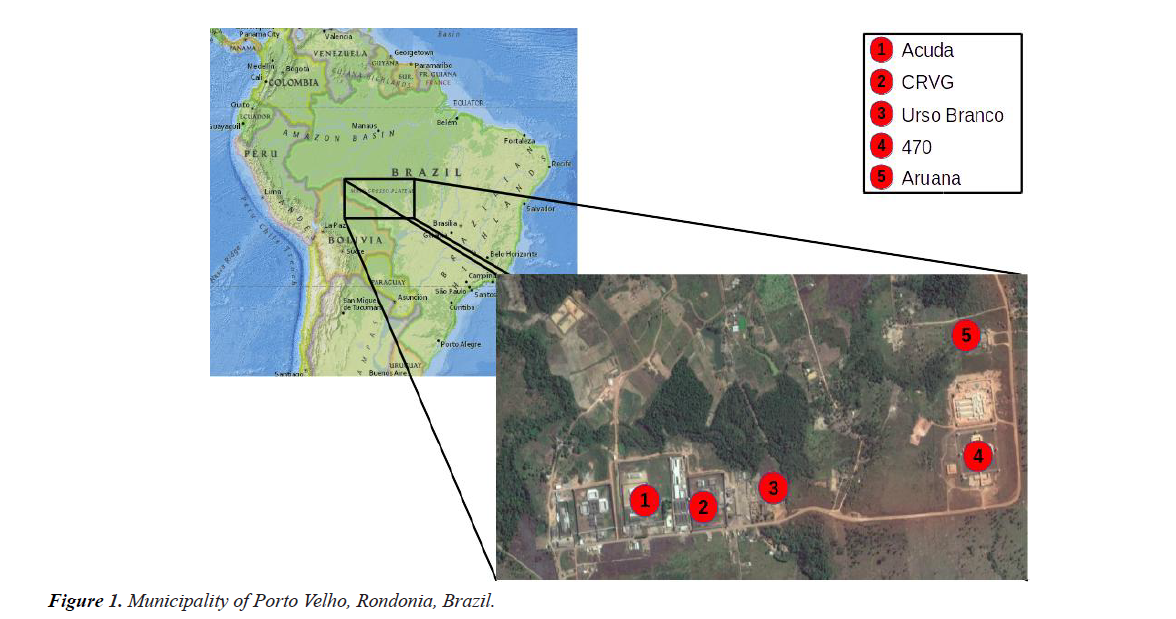 The study included institutionalized individuals in a closed prison system, male, aged 18 to 70 years old, who agreed to participate in the study by signing an informed consent form. Data collection included the completion of an epidemiological investigation card including identification data, sociodemographic data, health and life history. At the end of the interview, the following were performed individually: pre-test counseling, a nursing consultation to identify the current health conditions and collection of 10mL of venous blood in Vacutainer-type tubes, with no anticoagulants for serum separation.

Biological samples were stored at -20°C and then screened by rapid-run immunochromatographic assays (Rapid Tests) for anti-HIV, HBsAg, anti-HCV and anti-T. pallidum detection. Reagent samples in the screening were submitted to confirmatory serological and/or molecular biological tests, according to flow charts published by the Ministry of Health [9-11].

Individuals with confirmed results were referred for clinical follow-up, following the recommended sequence of patient care. Patients with viral hepatitis were monitored by the research group’s clinical team.

After the epidemiological and clinical approach, the data collected was stored in a database in EpiInfo® and analyzed using the Exact-Fisher statistical test to establish the prevalence of and relationships between interdependent factors. Both the statistical analysis and the construction of graphical representations were performed with the aid of the software GraphPadPrism 6.0®.

Table 1. Social and demographic factors associated with positivity for syphilis, HIV, HBV and HCV in 846 individuals from the prison population, Porto Velho-RO, Brazil

Data stratification demonstrates sociodemographic factors linked to the risk of contracting infections (Table 2). Statistical analysis showed that individuals under 30 years of age, 30.7% (P-value=0.0006; OR=0.4167; Confidence Interval 0.25-0.69), have a lower chance of contracting syphilis.

Table 2.Sexual and behavioral factors associated with positivity for syphilis, HIV, HBV and HCV in 846 individuals from the prison population, Porto Velho-RO, Brazil.

Table 2 represents the statistical analysis used to determine the association between sexual and behavioral habits associated with syphilis, HIV, HBV and HCV infection. Injectable drugs taken in non-biosafe standards, tattoos performed under inappropriate conditions, and sharing of needles and syringes were not related to positivity for infections. For syphilis, the group of inhaled narcotic substance users, including crack and cocaine, (p-value =0.0128; OR=0.53; Confidence Interval 0.33- 0.86) were less likely to contract the infection when compared to the non-dependent group.

For the other variables, the statistical analyses showed no correlation between the variables and an increase or reduction in the number of cases of infections addressed by the authors.

The prison population that composes this study is mostly young individuals with low education levels. The incarceration of less favored populations was also observed in studies carried out in other places in Brazil [2,12,13] and around the world [2,14,15].

Marginalization acts were observed to be a determinant in maintaining the chain of transmission of sexually transmitted infections. In Brazil, in 2016, parenteral-sexual transmission was more prevalent in people with low socioeconomic levels [16-18]. Of course, the prison population, which has the same characteristics, has high prevalence rates [2,15,19,20].

The seroprevalence of syphilis in this study was 8.9% (75/846); of these 2.7% were coinfected with HIV. Studies carried out with other at-risk groups indicate rates varying between 3.9% and 34.7%, with higher concentrations among incarcerated persons [2,21,22], homosexuals [23,24] and homeless people [25], highlighting the role of HIV as an exposure factor.

Regarding the age profile, in this study those incarcerated under the age of 30 presented lower infection rates; an event explained by Puga et al. [13]. Who associated this with prolonged exposure to risk factors throughout life.

However, the age profile of patients with syphilis is quite discrepant; studies with vulnerable populations show different profiles. Albuquerque et al. [5]. Found a higher prevalence among incarcerated patients under 30 years of age [25]. Demonstrated that syphilis is widely distributed among homeless people between 18 and 60 years of age [23]. Upon investigating the rate of infected homosexuals and transsexuals showed higher rates among people under 25 and over 30, respectively.

The prevalence of HIV among prisoners detected in this study, 1.4%, is similar to other studies performed in the same population. Seroprevalence between 1.1% and 1.8% was demons Compared with the national average of 0.4%, the data show the vulnerability of the prison population in contracting the HIV virus [9].

Research carried out with vulnerable populations associated HIV prevalence with injectable drug use, unprotected sex and sexual practices with other men [5,13,26,27].

In this study, the statistical association (p<0.05) demonstrated that subjects who had intramural sex did not represent an atrisk group for HIV infection. However, it may be related to the reduced sample size “n”, 12 individuals.

Another group with lower prevalence rates was those institutionalized who did not have an active sex life over the last year, which can be explained by the low exposure to the unprotected sex risk factor.

The prevalence of Hepatitis B in the Brazilian general population is 0.37%; when the data is restricted to the northern region of the country, considered to be highly endemic for HBV infection, the index is 0.63% [18]. However, some groups present higher rates, including HIV-infected subjects, patients with chronic renal failure, individuals with coagulation disorders and injectable drug users [22,28,29].

In this regard, prisoners are also considered an at-risk group, with high prevalence rates. The positivity for HBV in this study was 1.4% (n=12), the same rate detected in penitentiary units in Mato Grosso [28]. Some studies show even higher rates, higher than 10.0% [22,23,29]. Such high indices in specific populations are due to exposure to risk factors, including unprotected sex, injectable drug use, multiple partners, and same-sex relationships [23,29].

Studies performed with prison populations detected prevalences of HCV ranging from 2.7% to 4.3%.

In this study, the seroprevalence was 0.9% (9/846), similar to that identified by de Falquetto [29] and Soares [21], both 1.0%. These rates may be associated with the low number of injectable drug users, one of the major risk factors for HCV transmission. Unexpected sexual intercourse is not considered an important exposure factor for hepatitis C, taking it out of the STI category [17].

Usually, HCV infection is associated with ages over 40 years old, injectable drug use, needle and syringe sharing, and HIV positivity, a participant profile not shown in this study [12,13,21- 23].

The study demonstrated above-average prevalence for the sexually transmitted infections studied and points to the prison population as vulnerable in the transmission of infections by the parenteral-sexual route.

The study reinforces the role of penitentiaries in maintaining the chain of transmission of these pathologies in the intramural environment. It is also important to emphasize that the prison population has the prospect of returning to social life in the future, becoming a source of contamination for society.

The results of this study point to the need to implement specific public health policies for the prison population, with emphasis on health education activities and broadening access to health services within the units.

It reinforces the need to strengthen primary care, aiming at early diagnosis and treatment in a timely manner, improving the current health status of the penitentiary system in Brazil.

FIOCRUZ Rondonia for supporting the submission decision of the article.

The authors declare no potential conflicts of interest.