Materials and Methods: Sixty-six of the 650 clinical blood samples collected have turned out to be positive for S. typhi. Antimicrobial susceptibility and MIC was done as recommended by CLSI. Phenotypic screening of ESBL production and the PCR amplification ESBL coding genes blaCTX-M2, and blaCTX-M9 was also achieved.

Results: Sixty-six out of 650 clinical blood samples have turned out to be positive for S. typhi with an incidence rate of 10.15%. Among 66 isolates (n=44) isolates were MDR. The significant increase in MIC was observed between 128-256 μg/ml to cefetoxime, among the isolates, 9 S. typhi isolates reported positive for cefetoxime-mediated ESBL production. The PCR amplification of ESBL coding genes blaCTX-M2 and blaCTXM-9 yielded amplicon size of 884 and 692 bp, respectively. The ciprofloxacin resistant and cefetoxime sensitive standard MTCC S. typhi 734 and S. typhi BST 63 strain showed absence of both blaCTX-M2 and blaCTXM-9 genes.

Conclusion: The study shows an increase in the incidence rate of MDR S. typhi infection and ESBL production in S. typhi clinical isolates.

Majority of Salmonella sp. causes various types of clinical syndromes in humans and have been broadly categorized into two groups. The first, enteric fever, is caused by Typhoidal salmonella (TS) like S. typhi (typhoid fever), S. paratyphi A, and S. paratyphi B (Paratyphoid fever) and are mostly transmitted through contaminated water and food. The second type of clinical syndromes like diarrhea and gastroenteritis are caused by non-typhoidal Salmonella serovars [1]. In India, enteric diseases are most prevalent in urban areas, with the incidence approaching one percent of the population annually in some endemic areas [2]. Earlier studies have shown that majority of enteric fevers are prevalent in most of the developing countries like India, Pakistan, Bangladesh, and several African nations. In India, some reports suggest the incidence of typhoid fever in urban slum areas was as high as 0.2% (2 typhoid positive patients per 1000 population) per year among children less than 5 years of age, and 0.51% (5.1 typhoid positive patients per 1000 population) per year among those under 10 years of age [3]. Incidence of typhoidal infection varies with age. Studies from Kolkata have shown that the incidence of typhoid fever is higher in persons with average age of 14.7 y [4]. In contrast, the incidence of paratyphoid fever is higher among persons mean age of 17.1 y [4]. A study conducted in north India shows that incidence ratio of typhoidal fever is higher in children between 5 and 12 y of age, and the ratio is far higher in children aged less than 5 y; 24.8% of cases per year were reported among the children aged less than 5 y [5].

Extended Spectrum Beta-Lactamases (ESBL) were originally recognized in the year 1983 [6]. They belong to group of amber-class A β-lactamase enzyme that potentially hydrolyze β-lactam antibiotics with an oximinino group such as thirdgeneration cephalosporin’s and aztreonem, and are completely inactivated by β-lactamase inhibitors. The screening of the positive ESBL production in S. enterica serovars was detected and reported from various countries like Italy, France, and Nepal [7]. The significant increase in the production of CTXM- β-lactamases, a family of ESBLs, preferably hydrolyze cefetoxime (CTX) has been recognized and reported with increasing frequency [8]. CTX-M type of ESBLs or cefotaximases encoded by blaCTX-M genes located in a plasmid or on the chromosome belongs to type of class A β- lactamases [9]. This widespread resistance mechanism across the most part of the globe, from Europe, Africa, Asia, South America, and most recently from North America with several reports of clinical isolates producing these lactamases [8,10].

The CTX-M-type ESBLs causing serious concerns by displaying significantly increased level of resistance to both cefetoxime (CTX) and ceftriaxone (CTR) than that to ceftazidime (Caz). Approximately, 40 various types of CTX-M enzymes have been identified, and classified into five groups based on their amino-acid sequence homology, subsequently, been reported in different enterobacteria [11]. The first cefotaximase to be reported in Salmonella sp. was CTX-M-2, subsequently, over ten other CTX-M enzymes have been identified and reported in different Salmonella serovars with S. enterica serovar typhimurium being the most frequent, producing CTX-M-type enzymes such as CTX-M-5 and CTXM- 15 [6,12,13].

Presently, ciprofloxacin is preferred as a drug of choice for the treatment of typhoid infections. Its frequent administration has resulted in dramatic emergence of S. typhi with reduced susceptibilities to fluoroquinolones [2]. A study conducted in Kolkata has given a strong evidence of fluoroquinoloneresistant S. typhi with the Minimum Inhibitory Concentration (MIC) as high as 16 μg/ml to ciprofloxacin and norfloxacin [14]. Fluoroquinolone resistance in India is similar in pattern to other Asian countries [15].

The principal objective of the conducted study was to determine the incidence of multidrug resistance (MDR) and screening of extended spectrum β-lactamase (ESBL) in S. typhi strains isolated from typhoid patients from Kalaburagi region, Karnataka, India, and PCR amplification of plasmid-encoded blaCTX-M2 and blaCTX-M9 genes majorly responsible for cefetoxime-mediated resistance in S. typhi isolates.

In the present study, 650 blood samples were collected from typhoid-suspected patients confirmed by Widal test from Government Hospital, Kalaburagi, India and Pooja Diagnostic Centre, Kalaburagi, India during July 2013-December 2013. The samples were enriched in tryptic soy broth with 100 units of streptokinase to dissolve clot. They were processed and tested biochemically according to standard guidelines for S. typhi isolation [16]. The isolated S. typhi strains were screened in relation to Standard MTCC S. typhi 734 and genotypically confirmed by 16S rDNA sequencing at Chromous biotech laboratory, Bangalore, India, with universal primers.

The S. typhi isolates and standard MTCC S. typhi 734 were tested for antibiotic susceptibility and resistance for various groups of antibiotics by Kirby-Bauer disk diffusion method as per the standard guidelines of Clinical Laboratory Standard Institute (CLSI) [17,18]. The 16 antibiotic disks (Himedia Pvt. Ltd., Mumbai, India) selected for this study are listed in Table 1. The zone of inhibition post incubation was measured using standard antibiogram scale.

Table 1: Antibiotics selected for the study.

Double disc synergetic test: Double disc synergy test is the confirmatory test to combination disc method and was performed by standard protocol of Drieux et al. [20]. This test was performed on MHA seeded with S. typhi isolates and impregnated with amoxiclav or augmentin (combination of amoxicillin with 10 μg of clavulanic acid) at the center surrounded by cephalosporin antibiotic discs like cefetoxime (30 μg), ceftazidime (30 μg), cefexime (30 μg) set 30 mm from the center (Standard CLSI Guidelines, 2012) and incubated at 37°C for 24 h. A significant enhancement in the inhibition zone with either one of the test antibiotics to Augmentin disc is confirms positive for ESBL production.

PCR analysis was carried out to detect plasmid-encoded blaCTX-M2 and blaCTX-M9 responsible for cefetoximemediated drug resistance in S. typhi. The primers, sourced from Chromous Biotech Pvt. Ltd, Bangalore, India, were for blaCTX-M2, 5’-CGGTGCTTAAACAGAGCGAG-3’ (Forward), blaCTX-M2 (reverse) 5’ CCATGAATAAGC AGCTGATTGCCC-3’, blaCTX-M9 (forward) 5’- GATTGACCGTATTGGGAGTTT-3’, blaCTX-M9 (reverse) 5’- CGGCTG GGTAAAATAGGTCA-3’ [21]. For PCR amplification, about 100 ng of DNA was added to 50 μl mixture containing 10 mM of dNTPs, 0.4 mM of each forward and reverse primer and 3 U of Taq polymerase in 10X PCR buffer containing 1.5 mM MgCl2. Amplification was performed in a Corbett CGI-96 thermocycler with cycling parameters comprising the following steps, initial denaturation at 94°C for 5 min, sequentially followed by, denaturation 94°C for 30 s, annealing at 50°C for 30 s, extension at 72°C for 1 min and final extension at 72°C for 10 min for 35 cycles [22]. Finally, after accomplishing amplification, DNA ladder of 100 bp and 500 bp (Bangalore Genei Pvt Limited, India) were used to determine the size of amplicons.

Of the total 650 samples, only 66 have shown culture positivity for S. enterica Serovar typhi with isolation rate of 10.15%. Results of 16S rDNA sequencing show 100% resemblance with S. typhi isolates in nucleotide BLAST analysis in comparison with existing databases. The sequences have been submitted to National Centre for Biotechnology Information through bankit and the accession number of three MDR isolates, namely, BST 51 (accession no. KR537431) BST 103 (accession no. KR537432) and BST 130 (accession no. KR537433) were obtained from the existing database through BLAST and phylogenetic tree constructed using bioinformatics tool (Figure 1). 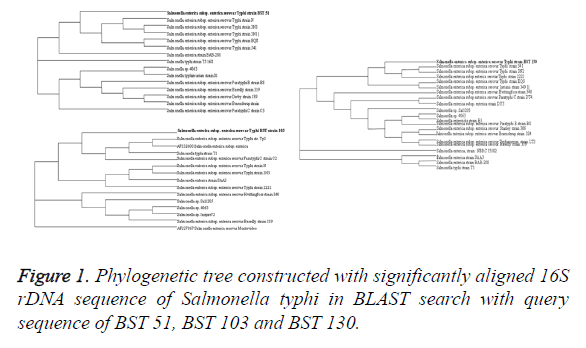 Sixty-six positive S. typhi isolates were chosen for this study. Among them, 06.06% (n=04) were ampicillin resistant but 100% (n=66) of isolates showed reduced susceptibility to aztreonem. In addition to that 24.25% (n=16) strains were resistant to cefexime, ceftazidime respectively, in contrast only 13.63% (n=09) to ceftriaxone. However, 46.97% (n=31) isolates were cefetoxime resistant, comparatively higher to other cephalosporin’s. Subsequently, 42.42% (n=28), 46.97% (n=31) of isolates shown resistance to nalidixic acid, ciprofloxacin respectively in contrast 100% (n=66) isolates were showed reduced resistance against higher-generation quinolones such as levofloxacin and gatifloxacin. In addition to that, all n=66 isolates were entirely sensitive to cotrimoxizole and azithromycin. We observed decreased resistance in S. typhi isolates to aminoglycoside antibiotics; streptomycin and amikacin, i.e., 06.06% (n=04), 1.5% (n=01) respectively (Figure 2). Only 10.60% (n=7) isolates were resistant to tetracycline and 03.03% (n=2) to chloramphenicol. However, standard MTCC S. typhi 734 strain showed resistance to ciprofloxacin, in contrast it was susceptible to cefetoxime, cefexime and ceftriaxone belongs to group of cephalosporin’s (Table 2). 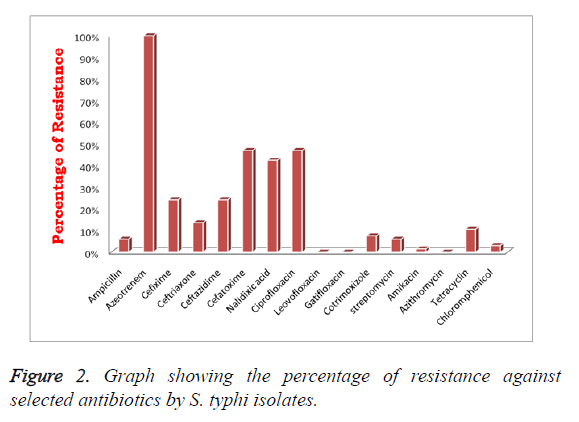 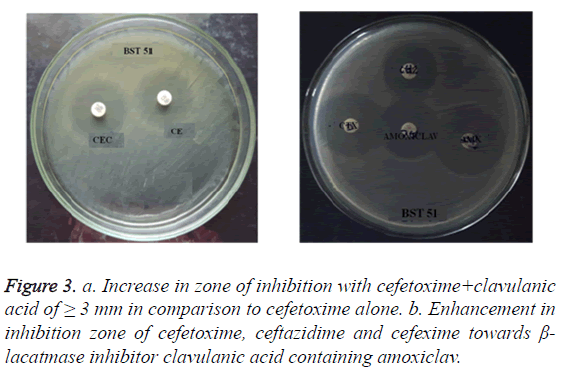 The present study evaluates the incidence of MDR S. typhi and cefetoxime-mediated ESBL production in S. typhi strains isolated from Kalaburagi City, Karnataka, India. Of the total of 650 Widal-positive samples collected, n=66 have shown positivity for S. typhi at the incidence rate of 10.15%, which is significantly higher in comparison with earlier studies conducted in this area [34]. Sixty-seven percent (n=44) of isolates were MDR and have shown resistance to more than three antibiotics. Antibiotic susceptibility test has shown 46.97% (n=31) strains having reduced susceptibility to ciprofloxacin; in contrast, to all n=66 highly susceptible to third- and fourth-generation antibiotics like levofloxacin and gatifloxacin. Decreased resistance of 7.15% (n=02) was observed in ampicillin, chloramphenicol, streptomycin and 10.6% (n=07) in tetracycline, respectively. Altogether, 66 isolates have shown 100% susceptibility to both cotrimoxizole and azithromycin. Interestingly, 54.54% (n=36) have shown remarkably reduced susceptibility to third-generation cephalosporin’s. The percentage of resistance is relatively higher in cefetoxime 86.11% (n=31), cefexime 44.44% (n=16), ceftriaxone 25% (n=9) and ceftazidime 44.44% (n=16) respectively.

Twelve out of 31 ciprofloxacin-resistant S. typhi isolates have shown an elevated level of MIC in the range of 128-256 μg/ml. There is a substantial increase in MIC level to cefetoxime with four (n=4) isolates in the range of 256 μg/ml; the result is relatively similar in comparison with the studies conducted in China by Yu et al. [35] on S. typhimurium. Four isolates have shown MIC to ampicillin in the range 256-512 μg/ml and also we found relatively higher range of MIC to chloramphenicol of 512 μg/ml.

Our study shows that the significant increase in the level of drug resistance among S. typhi isolates to higher-generation antibiotics like cephalosporin’s and higher-generation fluoroquinolones with higher level of MIC. Emergence of ESBL in S. typhi majorly in developing countries reflects poorly on sanitary conditions, inadequate medical attention, and contamination of water and food. Antibiotic susceptibility test and ESBL detection are recommended prior to treatment.

The authors declare of no conflict of interest in conducting this study.