Sawsan A Omer1, Ashwag A Alzuraiq1 and Osama B Mohammed2*

This study was conducted to investigate the prevalence of Sarcocystis infections in camels slaughtered using different detection methods. Tissues from the oesophagus, tongue, skeletal muscle, diaphragm and heart were collected from 80 camels (60 males and 20 females) slaughtered. Pepsin-digestion and histological methods were used in the study. Bradyzoites were purified using Percoll density gradient centrifugation and molecular detection was attempted from the DNA extracted from purified bradyzoites. The prevalence of Sarcocystis infections in camels in Riyadh city was 50% using the pepsindigestion method and 41.3% using microscopic method. Males revealed 24 (40%) Sarcocystis infection following the pepsin digestion method while 13 (21.7%) showed microscopic cysts in histological sections (Chi square=4.7281 and p<0.05). While females revealed 80% and 45% prevalence using the pepsindigestion and the microscopic methods, respectively (Chi square=5.2267 and p<0.05). The skeletal muscle showed the highest bradyzoites count in the 5 minutes count (606 ± 74) while the heart showed the lowest count (101 ± 18). The highest prevalence on histological sections was reported from the tongue while the skeletal muscle revealed the lowest. Attempts to amplify the 18S rDNA from purified bradyzoites DNA revealed successful amplification of the expected DNA fragment for Sarcocystis spp.

Sarcocystosis is caused by different species of Sarcocystis, an intracellular protozoan parasite belonging to phylum Apicomplexa. More than 220 species of Sarcosystis are known as parasites of domestic and wild animals; their distribution is worldwide [1]. These parasites are of considerable veterinary and public health importance, they have an indirect life cycle, with the sexual stages in their definitive host and the asexual stages in the intermediate host, some species are pathogenic to their intermediate hosts [2,3].

Sarcocystis in camels has first been reported by Mason as thin and thick walls [4]. Dubey et al. [5] named the thick-walled sarcocyst found originally by Mason as S. cameli, but they did not assign a name to the other thin-walled sarcocysts which were named S. ippeni by Odening [6]. Specimens which were reported by Mason [4] or sarcocysts from other camels were not examined by Dubey et al. [5] or by Odening [6]. The presence of thick and thin-walled sarcocysts was confirmed in camels from Saudi Arabia [7] and Somalia [8]. In Egypt, Abdel-Ghaffar et al. [9] studied the prevalence of Sarcocystis infection in camels and only one morphological type was detected.

Sarcocystis infection in camels is common throughout the range of distribution of the dromedary camels in Saudi Arabia [7,13,14]. The aim of this study was to determine the prevalence of Sarcocystis infections in camels slaughtered for human consumption at the slaughterhouse in the Riyadh city, using both microscopic and pepsin-digestion methods and attempting to detect these parasites using molecular techniques.

Tissues from the oesophagus, tongue, skeletal muscle, diaphragm and heart were collected from 80 camels slaughtered. Of those 60 were males and 20 were females. The age of the males ranged between 9 months to 2 years old while females’ age ranged between 4 and 6 years. In the laboratory, the tissues were investigated using the pepsin-digestion method and cystozoites (bradyzoites) recovered from each organ were counted for 5 minutes using previously described techniques [15,16].

Pieces of tissues were examined macroscopically for the presence of macroscopic cysts. Representative samples were preserved in Neutral Buffered Formalin (NBF) and processed for histological examination in paraffin blocks. The paraffin blocks were cut into thin sections (5 μm) and stained with H and E and examined microscopically.

The bradyzoites recovered as a result of pepsin-digestion of muscle tissues were purified using a density gradient centrifugation using Percoll [17]. DNA was extracted from the purified cystozoites using QiaGen tissue and blood DNA extraction kits (Hilden, Germany). The extracted DNA was subjected to PCR amplification using primers which amplify the 18S rDNA gene [18]. PCR products were detected through agarose gel electrophoresis. Digital image was obtained from the PCR product amplified.

The prevalence of Sarcocystis infection in the dromedary camels (Camelus dromedarius) in the Riyadh city was found to be 50% using the digestion method (Table 1) and 41.3% examining the histological tissue sections (Table 2). The difference in the prevalence using the pepsin-digestion and the histological methods was found to be significant (Chi square value 36.1, p<0.01). Since all males investigated were less than 2 years and the females were between 4 and 6 years, therefore, the gender factor is similarly applied for the age factor. Bradyzoites were detected following the pepsin-digestion method in 24 (40%) of the male camels while it was detected in 16 (80%) of the female camel investigated. There was a significant difference in the prevalence using the pepsindigestion method between male and female individuals (Chi square value 9.6, p<0.01). Results obtained from the pepsindigestion method was found to be significantly higher from the microscopic method in both males and females (for males Chi square value=4.7 and p<0.05; for females Chi square vale=5.2 and p<0.05). 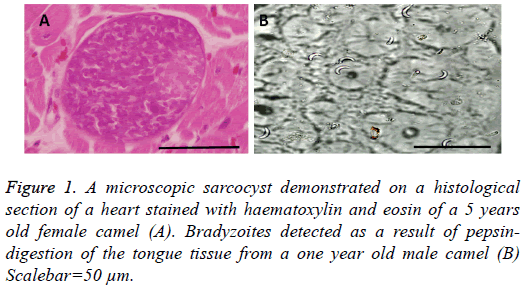 Figure 1: A microscopic sarcocyst demonstrated on a histological section of a heart stained with haematoxylin and eosin of a 5 years old female camel (A). Bradyzoites detected as a result of pepsindigestion of the tongue tissue from a one year old male camel (B) Scalebar=50 μm.

The purified bradyzoites obtained from the digestion of tissues containing cysts revealed high molecular weight DNA. The PCR resulted from the DNA using primers which amplify the 18S rRNA gene was a fragment of 1800 bp size which the expected PCR when amplifying DNA from Sarcocystis spp.

In Saudi Arabia, large and small-scale slaughterhouses prepare and provide meat from livestock for human consumption within Saudi Arabia. Camel meat is among the preferred meat in Saudi especially young camels. In the present study only microscopic cysts of Sarcocystis were detected from different muscle tissue collected from camels in Saudi Arabia. The overall prevalence of Sarcocystis infection in the dromedary camel was found to be 50% using the pepsin-digestion method and 41.3% using the microscopic examination. Previously, microscopic cysts were detected from camels in 56.7% in Saudi Arabia [14], in 50% of camels examined in the United Arab Emirates [19], in 61.5% of camels from Afghanistan [20], in 52% of camels from former USSR [21] and in 45.5% in camels from Ethiopia [22]. The prevalence of Sarcocystis infection in camels, as shown in the present study, using the pepsin-digestion method was significantly higher than the microscopic method. Previous work from camel has also shown much higher prevalence rates as high as 91.6% in camels examined from Iraq [23]. The results of the present study concur with the previous assumption that pepsindigestion method is the most sensitive method of detecting Sarcocystis infections in intermediate hosts [5,14,15,24,25]. A possible explanation for this finding is that larger pieces of tissues (20 g) are generally examined in the pepsin-digestion technique relative to that examined histologically. In the former method, the sarcocyst wall is broken down by pepsin and HCl, releasing many bradyzoites which are readily detected. Whereas in the latter method, if the cyst is not included in the region prepared for histological examination, it will not be detected. In contrast, Dubey and Powell [26] detected a higher prevalence of Sarcocystis in sows from Iowa by using histological methods than by the digestion technique. They sampled only heart tissue, and they may have examined histological sections from pigs raised on open pasture.

In the present study, male camels were less than two years old when they were slaughtered while females were over 4 years old. The prevalence of Sarcocystis infections in older camels was much higher than that of younger camels and the same applies for gender in the present study (prevalence in the females was much higher than in males). Similar observations were noticed in different animal species including camels [14,27,28,20-30]. One explanation is that sarcocysts take a long time to develop into mature cysts, which would possibly reduce the chance of identifying sarcocysts in the tissues of young animals [1].

The mature sarcocyst wall on histological sections stained with H and E appeared smooth and their thickness ranged from 1-2 μm. Dubey et al. [5] revised Sarcocystis species infecting camel and two of the named Sarcocystis spp. were regarded invalid which are Sarcocystis camelocanis and S. miesheri. Furthermore, S. camelicanis which was proposed by Abdel- Ghaffar et al. [9] was synonymized with S. cameli. Only Sarcocystis cameli and S. ippeni were considered valid species infecting the dromedary camel. The redesceription was based on Transmission Electron Microscopy (TEM) characteristics of the cysts and since no TEM was performed during the present study it would not be possible to characterize the species we are dealing with.

Detection of the Sarcocystis purified bradyzoites DNA obtained from digested camel tissues was possible and this could be a reliable method of obtaining DNA from other Sarcocystis species which will help in molecular studies.

Sarcocystis sp. infecting camel in Saudi Arabia is prevalent in Riyadh. The infection was detected using pepsin-digestion and histologial methods. Pepsin-digestion digestion method was found to be more sensitive than the histological methods. The bradyzoites resulted from pepsin-digestion were purified successfully and DNA was extracted from these bradyzoites. DNA of the sarcocyts obtained from camels was amplifiable using 18S rDNA primers. This method may be very helpful in obtaining pure bradyzoites of Sarcocystis sp. from camel and will help in phylogenetic studies.

This project was supported by a grant from the “Research Center of the female Scientific and Medical Colleges”, Deanship of Scientific Research, College of Science, King Saud University.