The value of pretreatment neutrophil-to-lymphocyte ratio (NLR) and platelet-to-lymphocyte ratio(PLR) in predicting survival in patients undergoing hepatectomy for hepotocelluar carcinoma was assessd. We conducted a retrospective analysis of 80 patients who underwent hepatectomy for hepatocellular carcinoma. Data of haematological laboratory values as well as demographics and histopathology were collected. Univariate and multivariate analyses were applied. Pretreatment high NLR was associated with shorter overall survival (OS)(P=0.034). Pretreatment high PLR was linked with shorter overall survival and disease-free survival (DFS)(P=0.038 and P=0.020). The patients with both high pretreatment NLR and PLR had shorter median OS and DFS than those with both low pretreatment NLR and PLR (P=0.026 and P=0.015). On multivariate analyses, pretreatment NLR (P=0.008), tumor–node–metastasis (TNM) stage (P=0.003), capsule invasion (P=0.025) and tumor differentiation (P=0.000) were independent of prognostic factors for overall survival. Pretreatment PLR (P=0.040), TNM stage (P=0.003) and tumor differentiation (P=0.011) were independent of prognostic factors for disease-free survival. Pretreatment high NLR and PLR might be potential biomarkers in cases of poor prognosis for patients undergoing hepatectomy for hepatocellular carcinoma.

Hepatocellular carcinoma (HCC) is one of the most common malignant tumors with limited treatment options. The hepatocarcinogenesis involves a series of mechanisms, such as chronic virus infection, gene mutation, cellular signal transduction, tumor neovascularization and so on. With growing evidence on the role of inflammation in carcinogenesis, the presence of a systemic inflammation has been proposed as having prognostic significance in a wide range of cancers [1]. Some haematological laboratory values, such as NLR, PLR, serum albumin level (SAL), absolute neutrophil count (ANC), have been reported as predictors of either prognosis or chemosensitivity [2,3]. The aim of this study was to assess the value of pretreatment NLR and PLR in predicting survival in patients undergoing hepatectomy for hepatocellular carcinoma.

Eighty patients who received surgical resection for histologically confirmed hepatocellular carcinoma at Chinese PLA General Hospital (Beijing, China) between 2003 and 2008 were included in this study. Patients were excluded if they were histologically diagnosed with intrahepatic cholangiocarcinoma, received preoperative neoadjuvant chemotherapy or radiotherapy, or had a history of any other cancer.

Calculation of NLR and PLR

Automated full blood counts, which included total white blood cells, neutrophils, lymphocytes and platelets, were carried out before surgery. The NLR was defined as the number of neutrophils to lymphocytes in the blood. The PLR was calculated as the ratio of the platelets to lymphocytes. DFS was measured from the day of surgery until disease progression or death. OS was calculated from the date of surgery until death or last clinical follow- up.

SPSS17.0 software was used for statistical analysis. The correlations between categorical variables were analyzed by the Chi-square test or Fisher’ test as appropriate. The Kaplan-Meier was used for prognostic single factor analysis and the significance of difference was calculated by log-rank test. Cox regression model was adopted for multivariate analysis. A P value less than 0.05 was considered to be statistically significant. 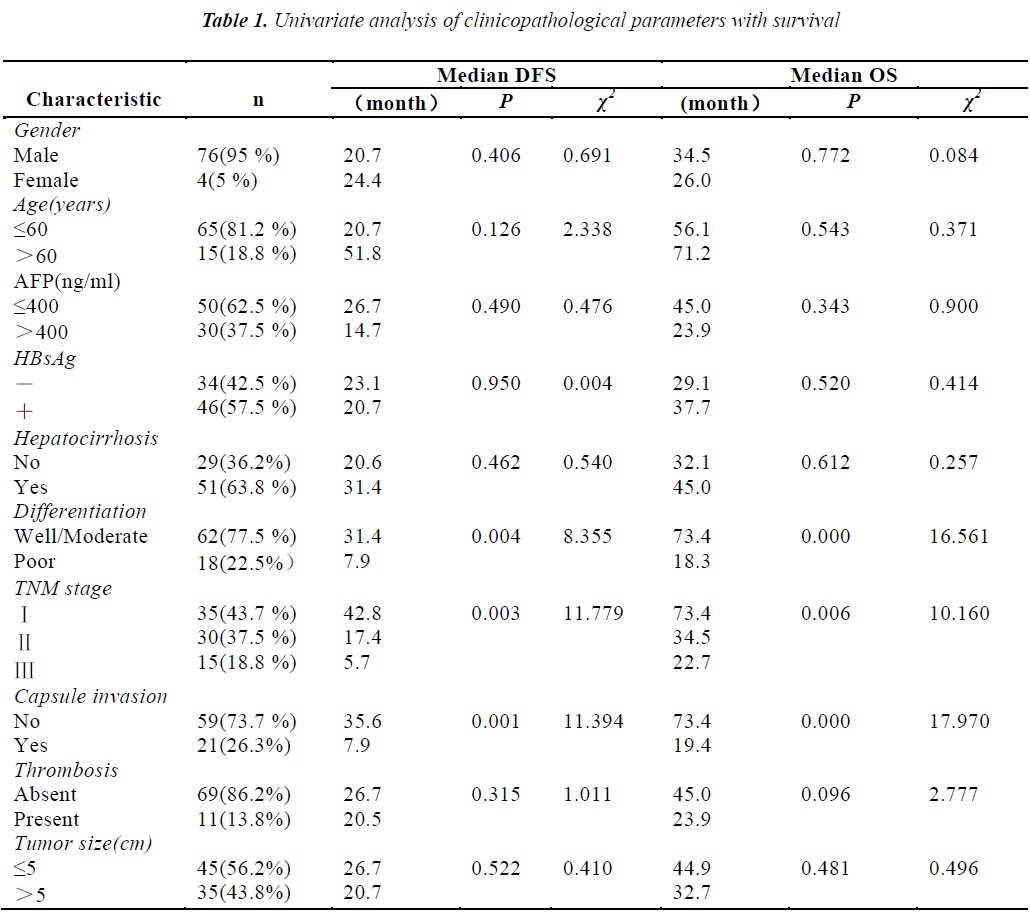 Table 2: Univariate analysis of correlations between NLR, PLR and prognosis. 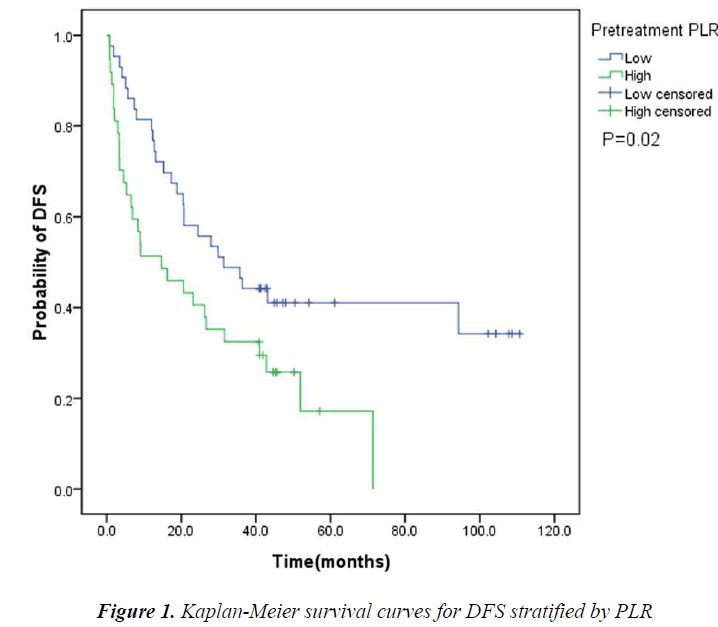 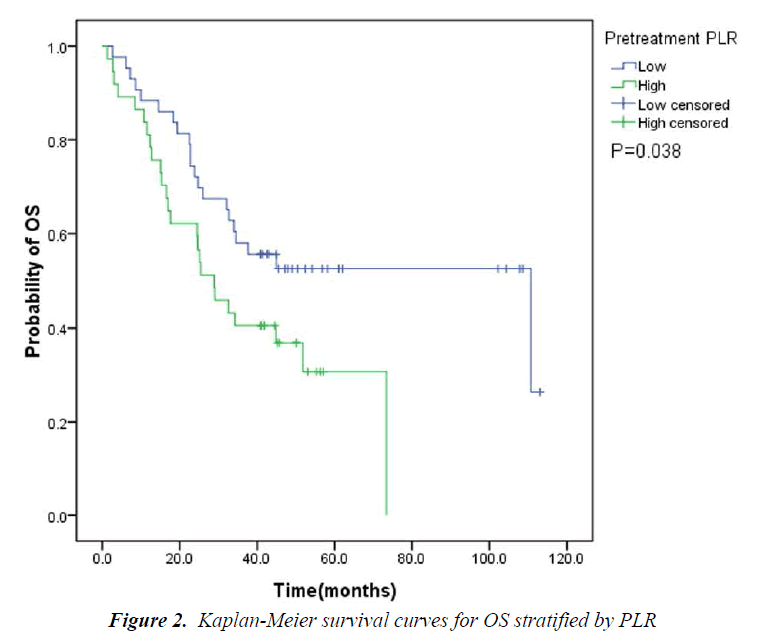 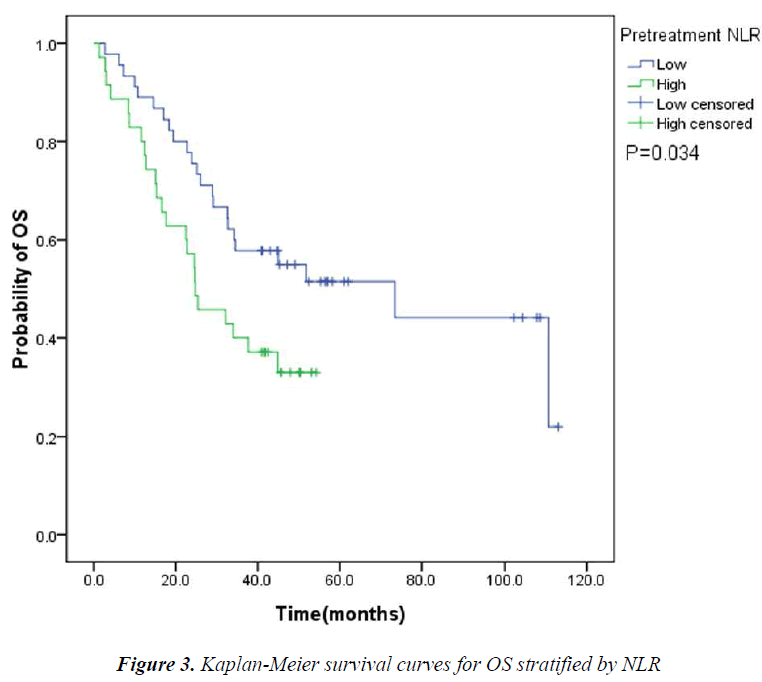 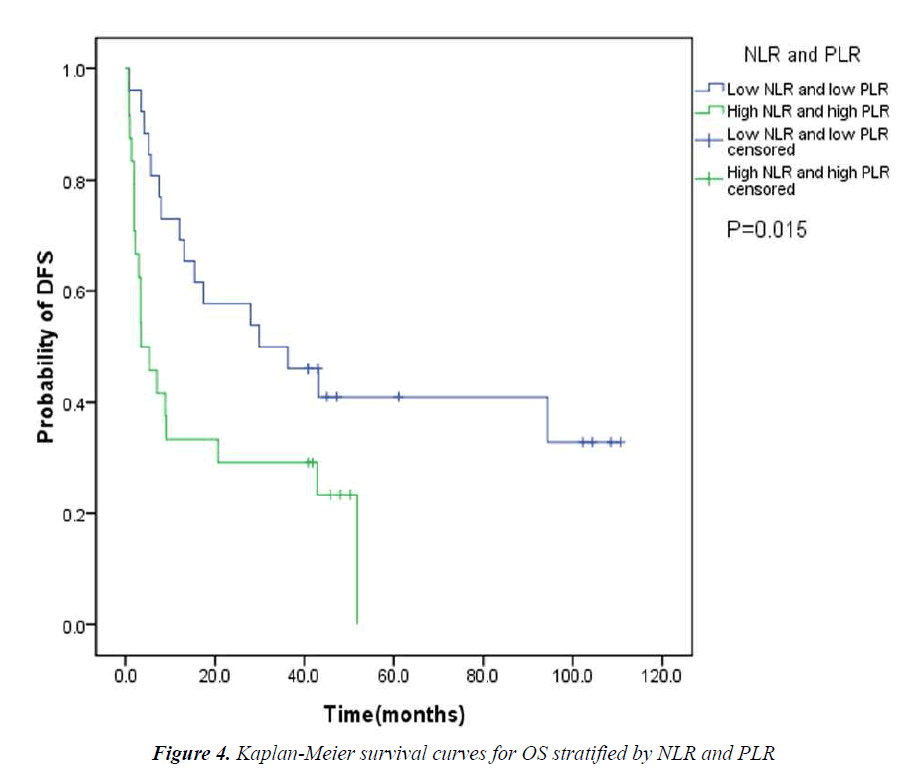 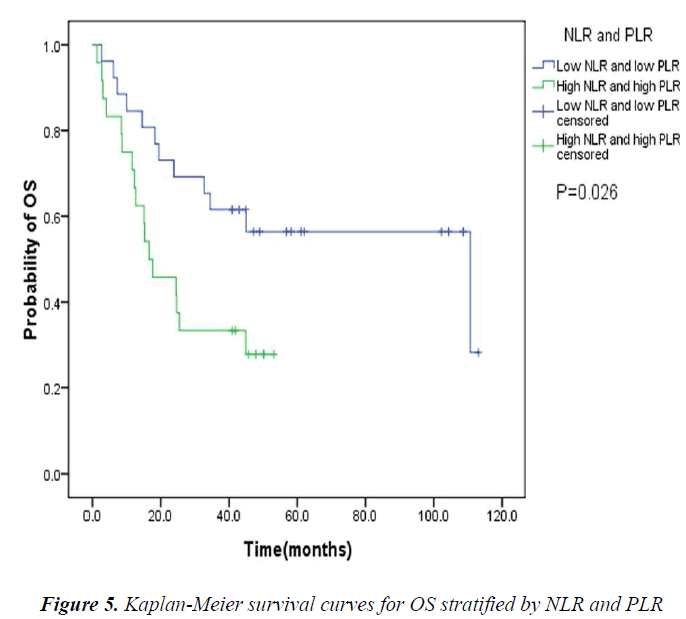 NLR. Similarly, there is no difference between patients with high PLR and low PLR (Table 3). 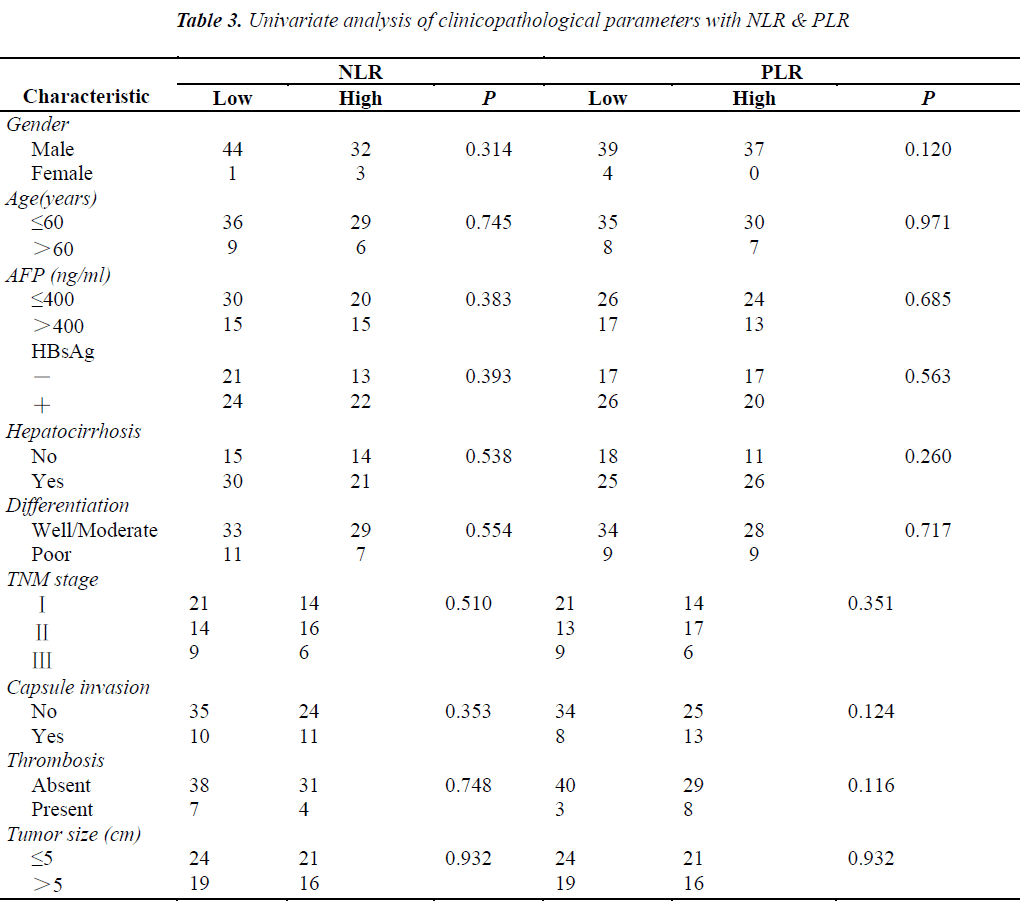 Inflammation is recognized both as a condition that leads to cancer development and also as a condition that arises due to oncogenic changes in cancer cells [4]. HCC is an example of inflammation-related cancer and represents a paradigm of the relation occurring between tumor microenvironment and tumor development [5]. Several studies have shown that chronic hepatitis virus infection, such as hepatitis B virus (HBV), is the etiological factor for hepatocarcinogenesis. HBV DNA load and HBV reactivation are major risks that influence the long-term survival of HCC patients who underwent hepatectomy and, thus, may cause postoperative liver function deterioration, tumor recurrence, and reduce patient's overall survival [6].

Tumor cells produce various cytokines and chemokines that attract leukocytes [7]. Neutrophils, the most common leukocyte, play a role in cancer-related inflammation and have been recently noticed because of the significant clinical relevance in predicting survival. High baseline neutrophil count in either tumor or blood, or both, was identified as strong, independent risk factor for poor outcome in multivariate analyses, and the negative prognostic impact of neutrophils was not eliminated by increasing the dose of cytokines, chemotherapy, or targeted therapy [8].

NLR is a cost-effective marker of inflammation. Several studies have shown the interaction between cancer and NLR. Elevated pretreatment NLR has been associated with poor prognosis in various cancers, such as nasopharyngeal carcinoma, renal cell carcinoma, breast cancer, non-small cell lung cancer (NSCLC), pancreatic cancers and so on [7,9-12]. A large-scale study of 1061 cervical carcinoma patients has identified higher pretreatment NLR as an independent poor prognostic factor for survival. Also the higher NLR group was younger in age and had more advancedstage disease when compared with those of the lower NLR group [13]. Another retrospective study of 958 patients undergoing hepatectomy for HCC similarly suggested that NLR was an independent prognostic factor in overall and recurrence-free survival. The 5-year survival rate after hepatectomy was 72.9% in patients with low NLR and 51.5% in those with high NLR [14]. In our study, we found high pretreatment NLR was significantly associated with shorter OS. The median DFS of patients with low pretreatment NLR was longer than those with high NLR (28.0 vs 18.8months). But the difference did not have any statistical significance (P=0.126).

The pretreatment NLR was also found to have the correlation with the prognostic value of the pathologic response to chemotherapy. Shimonagakubo et al [15] reported an elevation in the pretherapeutic NLR associated with a lower chemosensitivity in patients receiving neoadjuvant chemotherapy (NAC) for advanced esophageal cancer. The pathologic response rates were 56% in the patients with low NLR and 21% in patients with high NLR. Yao Y et al [16] also found that elevated pretreatment NLR might be a potential biomarker of worse response to first-line platinumbased chemotherapy and shorter progression free survival (PFS) and OS for advanced NSCLC patients. A study with 199 never-smokers with advanced lung adenocarcinoma suggested an early reduction in the NLR after effective treatment indicating survival improvement in the patients with a high pretreatment NLR [17].

Recent new evidences suggest that PLR is another biomarker closely related to clinical outcomes in cancer patients [7]. Lai Q et al [18] found that PLR is a good predictor for the risk of post-liver transplantation (LT) recurrence. Use of this marker, which is available before LT, may represent an additional tool to refine the selection criteria of HCC liver recipients. But there are also studies which failed to confirm the prognostic significance of PLR [19]. In our study, we found that the overall and disease-free survival were significantly associated with PLR. Pretreatment high PLR is an independent prognostic factor of poor DFS. When we took NLR and PLR together into consideration, the assessment seemed better for predicting the prognosis. The patients with both high pretreatment NLR and PLR had significantly shorter OS and DFS than those with both low pretreatment NLR and PLR.

In conclusion, pretreatment NLR and PLR might be potential biomarkers of prognosis in patients undergoing hepatectomy for hepatocellular carcinoma. Changes of NLR and PLR in blood might be an early warning of disease recurrence. The dynamic observation of these haematological laboratory values is necessary.

This study has been approved by the ethics committee of Chinese PLA General Hospital and have been performed in accordance with the ethical standards laid down in the 1964 Declaration of Helsinki and its later amendments. The consent for publication in print and electronically has been obtained from the patients of this paper.