Titanium dioxide, commonly known as titanium dioxide, is a kind of inorganic semiconductor material with various functions and widely used in many fields [1], which has anatase, rutile and titanium plate type 3-types of crystal forms [2,3]. So the morphology is more diverse and easy to control when we synthesized [4]. However, nano titanium dioxide shows strong surface activity because of its large specific surface area On the other hand, it is lack of coordination [5,6] that form a plurality of weakly bonded interface with larger size aggregates and influences the effectiveness of its application directly. Besides, nano-TiO2 also has many other advantages such as high chemical stability, non-toxic, non-selective degradation of organic matter [7]. It is photocatalyst that most talked about and has broad application prospects currently. But it turns out to be more difficult to improve the photocatalytic performance due to its own limitation, for example, the carrier is easy to compound and the utilization rate of light is low [8-10].

In recent years, there have been many studies on the formation of nano carbon materials and nano-TiO2 composites, the composite materials we obtained not only have the excellent conductive and optical properties of the carbon materials but also excellent photocatalytic properties of nano-TiO2 [11,12]. Graphene, which consists of single layer and sp2-hybridized carbon lattice with a remarkably high crystal quality and good electronic property [13]. Planar hexagon is the ideal structure of grapheme, a strong Sigma (σ) bond was formed between each carbon atom and 3 carbon atoms in the vicinity, but remaining a P electron was perpendicular to the graphene plane, which forms a big Pi (π) bond with surrounding atoms throughout the whole layer. The P electrons can move freely so that graphene has good electrical conductivity [14]. Since its discovery in 2004, graphene has become a new research hotspot because of its excellent electrical, thermal, mechanical and optical properties, and has been widely used in the field of photocatalys is and other fields [15]. In view of its excellent properties, many researchers began to study the photocatalytic properties of composites of graphene and other materials. By making use of the high conductivity of graphene, the composites can be used to prolong the lifetime of the electron and the hole of the light, so as to improve the photocatalytic activity [16]. However, nano-TiO2 prone to accumulation and agglomeration, which plays a certain role in the photocatalytic performance of graphene and nano-TiO2 composite materials [17].

In this paper, KH-550 was used to inhibited the aggregation of nano-TiO2 by grafting the organic groups onto the surface of the nano-TiO2. Then the KH-550 modified nano-TiO2/ RGO composites were prepared by hydrothermal method. The crystal structure, morphology and elemental speciation of the composites were analyzed by XRD, SEM, TEM, XPS and Raman. In addition, methyl orange solution was used as simulated pollutants to discuss the effect of different graphene contents on the photocatalytic activity of the composites.

Preparation of KH-550 modified TiO2: Quantitative nano- TiO2 was dried at 100°C for 12 h before used. Then drying nano-TiO2 and proper amount of toluene were added into a single-necked flask under ultrasonication for 40 min.

The solution was stirred for 1h at room temperature to make it evenly. Next, the corresponding ratio of KH-550 and triethylamine were added with nitrogen gas and heated up to 80ºC. The reflux reaction continued for 24 h. Afterwards, the black KH-550 modified nano-TiO2 precipitate formed in the solution was collected by filtration, which was washed three times with acetone, and dried in an oven at 60°C. After cooling to room temperature, weighing and grinding. KH-550 modified nano-TiO2 powder was obtained.

Preparation of graphene oxide: Graphite oxide was prepared using Hummers method from graphite powders [18]. The specific steps are as follows: concentrated H2SO4 (98%) was added to a beaker (250 ml), the solution was cooled below 4ºC. Then graphite powder and NaNO3 was added under magnetic stirring for 1 h to ensure adequate mixing. KMnO4 was added slowly in portions within 5 min to keep the reaction temperature below 4°C. The mixture maintains this temperature stirred for 2 h in ice bath. The beaker was transferred to oil bath. The reaction was warmed to 35 ± 3°C and stirred for 2 h, at which time appropriate deionized water was added slowly, producing a large exotherm to 95°C and continued to stir for 15 min. The reactant shifted into a 500 ml beaker diluted with distilled water to degree scale, and 5% H2O2 were added until the solution became brown. By high speed centrifugation and washed with HCl (5%) until the upper solution has no SO42- (detection by BaCl2). And then wash the upper solution with distilled water until it is neutral. Finally, the reaction liquid was placed in an ultrasonic instrument for 5 h. So graphene oxide solution was obtained.

Characterization of the samples

An X-ray photoelectron spectrometer (Thermo ESCALAB 250, Waltham, MA) was used to examine the element composition and valence state of the composites. The molecular structure of the composites was determined by Raman spectrum (DXR Smart). Transmission electron microscopy (TEM, Tecnai 12) and scanning electron microscope (JSM-6480) were used to analyze the morphology and structural details of the samples. The X-ray diffraction (XRD-6000, Shimadzu) of the product was carried out to analyse crystal structure, using Cu Ka radiation (λ=0.154) with the range of 10~80°.

The photocatalytic activities of the composites were evaluated by the degradation of methyl orange in a 50 mL beaker, and a 500 W mercury lamp was selected as the visible light source. In a typical experiment, 0.1 g of the as-prepared composites was dispersed in the methyl orange solution (50 ml, 20 mg/L). And then the solution was continued to stir in the dark for 1h, in order to reach the adsorption-desorption balance. During irradiation, 3 mL of the sample solution was taken out every 15 min and analyzed by UV-vis spectroscopy. The degradation rate of methyl orange can be calculated via the formula: η = (1-A/ A0) × 100%, where A0 and A are the absorbance values of the original methyl orange solution and irradiated solution.

Figure 2 shows the SEM image of different samples. Figure 2A shows the scanning electron microscopy (SEM) image of nano-TiO2 particles. The phenomenon of agglomeration can be found for the particles, and there is a large gap between the accumulation. This can be account for the small diameter of the nano-TiO2, and its surface has a large number of polar hydroxyl groups and quantitative surface energy, so that the particles appear to be agglomerated together. Compared with Figure 2A, there is no accumulation and aggregation phenomenon between the sample particles (Figure 2B). The reaction of KH-550 with the hydroxyl group on the surface of nano-TiO2 is supposed to be the crucial reason for the phenomenon. During the reaction, the surface of nano-TiO2 grafted with the organic group, the interaction between molecules make the particles separated, which inhibits the phenomenon of agglomeration. The nano- TiO2/RGO composites is formed on the basis of nano-TiO2 in Figure 2C, in which things like cotton attached to the nano-TiO2, and it has proved to be graphene. However, the accumulation and agglomeration of nano-TiO2 has not disappeared yet. The experimental results show that it has no impact on the overall structure of nano-TiO2 although graphene was attached to the nano-TiO2 surface. The SEM image in Figure 2D proves a uniform distribution and small voids between the composites. 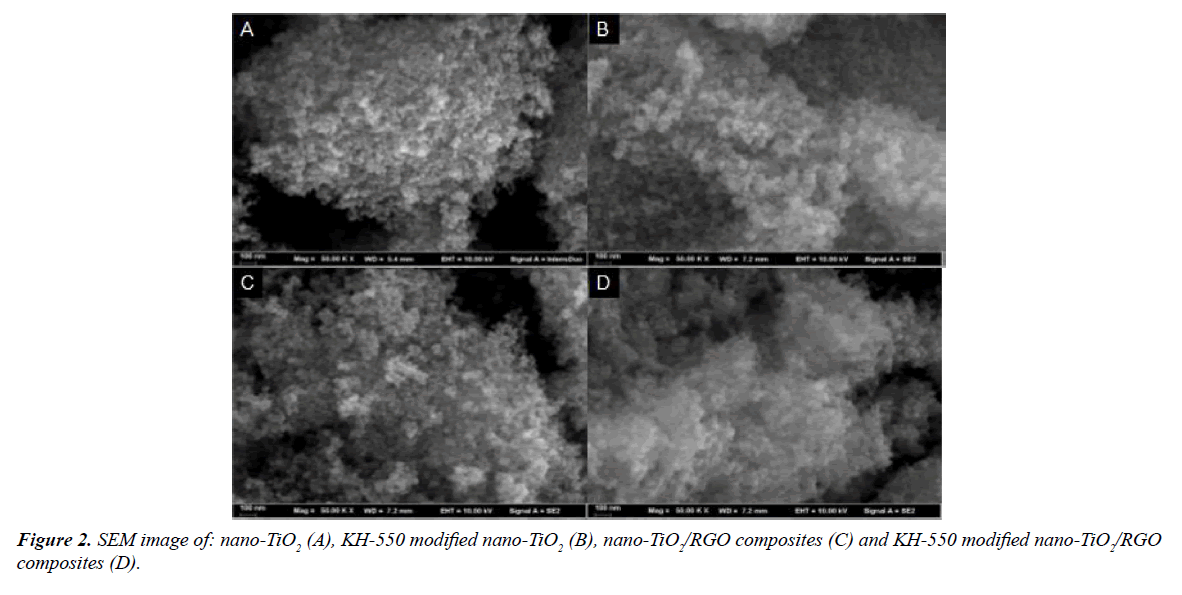 Graphene was attached to the entire surface and more regular, and the phenomenon of accumulation and aggregation has not appeared. All these results indicate that KH-550 functioned well as a good modifying agent to reduce the phenomenon of agglomeration.

Transmission electron microscope analysis of different samples: Figure 3 shows the TEM image of different samples. Figure 3A-3C are nano-TiO2, nano-TiO2/RGO composites and KH-550 modified nano-TiO2/RGO composites, respectively. Figure 3A shows that both ends of the particles appeared the phenomenon of accumulation and aggregation. This is due to a large number of polar hydroxyl groups and quantitative surface energy in the nano-TiO2 surface. Graphene is the structure of two-dimensional layer with many folds on the graphene sheets, which are the characteristics of single layer grapheme [20]. The Figure 3B proves grapheme with many wrinkle lines, and also a lot of particles on the grapheme can be found, these particles are nano-TiO2. The phenomenon of aggregation and accumulation of nano-TiO2 on grapheme in the composites of nano-TiO2 and grapheme, this is due to the graphene is loaded matrix, the structure and properties of nano-TiO2 can't change. KH-550 modified nano-TiO2 evenly dispersed on grapheme in Figure 3C, this is due to the reaction of KH-550 with the hydroxyl group on the surface of nano-TiO2, which the surface of nano-TiO2 grafted with the organic group, the interaction between molecules separate the particles, thus inhibiting the phenomenon of agglomeration, so KH-550 modified nano-TiO2 dispersed evenly on graphene. 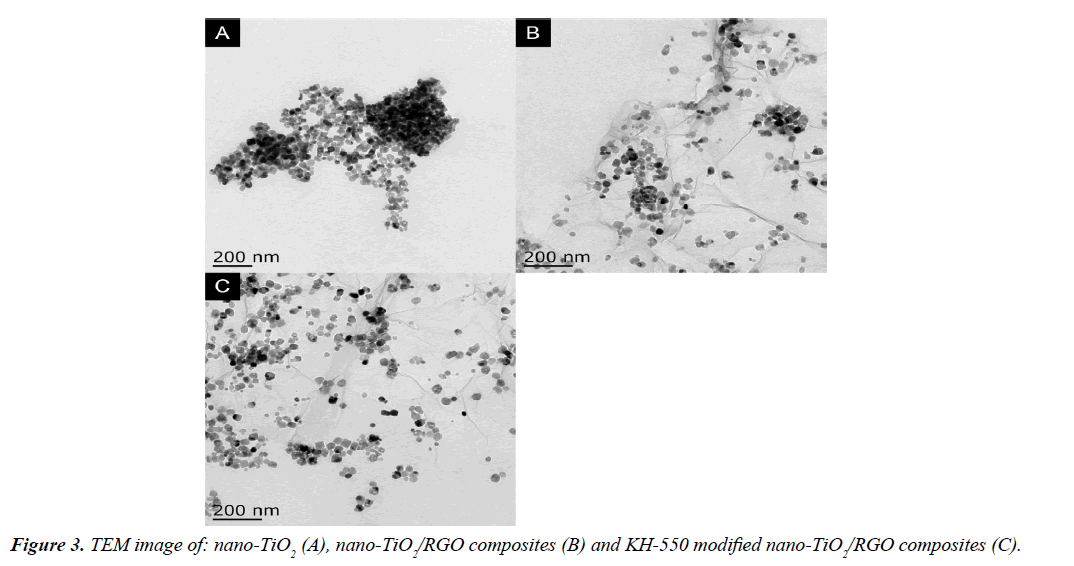 Raman spectroscopy as an effective analytical method, and apply to sp2 and sp3 hybrid applications in the characterization of carbon atoms on the graphene plane, used for study the disordered arrangement and defect of the carbon atoms on the surface of grapheme, raman vibrational peak of carbon atom SP2 plane are located at 1601 cm-1, and commonly called G band, corresponding to the D band is located at 1344 cm-1, this is raman vibrational peaks of SP3 hybrid. By comparing the peak intensities of D bands and G bands, the degree of disordered carbon atoms on the graphene plane can be expressed indirectly [21]. Figure 5A-5C shows that the D band and G band peak intensity of nano-TiO2/RGO and KH-550 modified nano-TiO2/ RGO composites are similar, the degree of disorder with both of grapheme are similar, which proves similar disorder degree between these two kinds of graphene. In addition, there have three raman vibration peaks in 394 cm-1, 518 cm-1 and 640 cm-1, corresponding to three vibrations of B1g, A1g and E g bands in nano-TiO2 [22].