The low level of high-density lipoprotein cholesterol (HDL-c) is a major risk factor for atherosclerotic cardiovascular disease including Lower extremity artery disease (LEAD). The variability of proprotein convertase subtilisin/kexin type 5 (PCSK5) gene was proposed as regulator of HDL-c metabolism. The molecular mechanisms are not fully elucidated. Several studies suggest that several genetic anomalies could influence the risk of developing LEAD. Considering these data, the aim of our study was to identify PCSK5 gene variants in patients with LEAD using multiplex ligation-dependent probe amplification (MLPA) as a screening method. The study included 48 patients with LEAD documented by angiography. All patients had low levels of HDL-c and a high total cholesterol/HDL-c ratio. DNA extraction was performed using the precipitation method, while polymorphisms of all PCSK5 gene exons were assessed using MLPA. The MPLA results were subsequently analysed with Coffalyser® software. Analysis of PCSK5 gene expression showed normal genotype in 45 patients. Heterozygous deletion of exon 9 of PCSK5 gene was identified in only 3 patients and was not correlated with HDL-c values. Our data cannot establish a clear correlation between mutational profile of PCSK5 gene and LEAD, so more extensive genetic testing in larger cohorts are required.

Atherosclerosis is a progressive inflammatory disease characterized by the accumulation of lipoproteins, mononuclear cells, smooth muscle cells and extracellular matrix in the arterial wall [1]. It is known that low levels of high-density lipoprotein cholesterol (HDL-c) represent a major risk factor for atherosclerotic cardiovascular disease including lower extremity artery disease (LEAD) [2]. Several experimental and human studies suggested the involvement of genetic alterations of proprotein convertase subtilisin/kexins (PCSKs), a serine endopeptidase family, in the metabolism of HDL-c, very low-density lipoprotein and chylomicrons [3-6]. The members of endopeptidase family are precursors of biologically active products and often interact with rennin through a mechanism not fully elucidated [7]. PCSK type 5 (PCSK5), as well as PCSK type 3 and PCSK type 6, acts on endothelial and lipoprotein lipases that modulates HDL-c levels [8]. PCSK5 is a precursor protein with 1860 amino acids (206.942 Da) and two isoforms, and is encoded by PCSK5 gene located on chromosome 9 (78505560-78977255 bp from p-terminal end (9q21.13-31)) [9]. In patients with impaired HDL-c levels seven variants of PCSK5 gene were detected, but none of these variants was a missense mutation [10]. Some experimental and clinical studies have identified PCSK5 in the atherosclerotic plaque and suggested that PCSK5 modulates the inflammation in atherosclerosis. It has been shown that PCSK5 activates matrix metalloproteinases and integrins, while the levels of PCSK expression increase during macrophage differentiation [11]. In contrast, Tampere Vascular Study, a unique study by its design, based on collection and comparative analysis of human atherosclerotic plaques in different vascular territories and control arteries, suggested that PCSK5 is significantly downregulated [12]. Similarly, Turpeinen et al. have shown that the PCSK5 gene is under expressed in smooth muscle cells of atherosclerotic plaques, but this seems to be not specific for atherosclerotic lesions [13]. On the other hand, recent sophisticated genetic approaches consider that the variation in the genetic code and its interaction with environmental factors may also be involved in the pathogenesis of LEAD [14]. Taking into account the above considerations, the connection between PCSK5 expression and atherosclerotic vascular disease such as LEAD is not fully elucidated and should be clarified in further studies. This study aimed to identify PCSK5 gene variants in patients with LEAD using multiplex ligation-dependent probe amplification (MLPA) as a screening method.

Our study included 48 patients (41 men and 7 women, aged between 45-85 years) admitted to the Cardiology Department, “Sf. Spiridon” Emergency Districtual Clinical Hospital Iasi between July and December 2012. All patients came from the North-East region of Romania. The study was performed in accordance with the ethical standards of the institutional committee. The patients were previously informed about the purpose of the study and were included after signing an informed consent. The patients eligible for the study had LEAD documented by angiography. Dyslipidemia was confirmed by a fasting lipid profile analysis (cholesterol, HDLcholesterol, LDL-cholesterol and triglycerides).

A blood sample was also taken for genomic Deoxyribonucleic Acid (DNA) extraction. The exons of PCSK5 gene were analysed in DNA. The extractions were carried out by using Wizard® Genomic DNA Purification-Promega Kit (Promega Inc., Madison, WI, USA). The DNA was quantified using a Nanodrop 2000® spectrophotometer and then aliquoted and labeled in order to achieve DNA collection in Medical Genetics Department.

The gene sequences were amplified using MLPA technique for PCSK5 exons, with a 60 ng/μl DNA concentration. The technique was performed using P273-A1 PCSK5 MRC kit (provided by MRC-Holland). It contains 48 samples consisting of amplicones between 130 and 493 nucleotides and 9 control sequences with amplification products of 120 nucleotides (4 sequences check DNA quality, 3 sequences for DNA control and 2 sequences identify the gender of patient). The MLPA reaction was divided into five steps: DNA denaturation, hybridization and ligation, PCR amplification, capillary electrophoresis and data analysis. The Cy5 fluorochrome with absorption at 649 nm and emission at 670 nm was used. The fluorescence level was measured by spectrophotometry and the results were further analysed using Coffalyser® software.

MPLA gene analysis showed a normal amplification in 45 patients (Figure 1), with values ranging between 0.8 and 1.2. Thus, we considered that all these patients were homozygotes for normal alleles of PCSK5 gene. 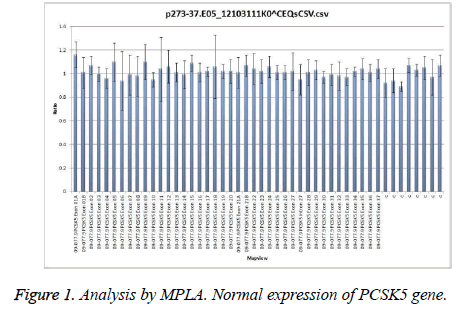 Three of our patients (6.25%) had heterozygous deletion of exon 9 of PCSK5 gene as shown in Figure 2. 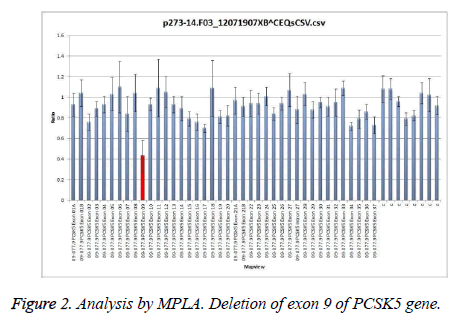 Figure 2: Analysis by MPLA. Deletion of exon 9 of PCSK5 gene.

The three patients belonged to different families; they were aged over 60 years, and had low HDL-c levels. One of the patients was female and non-smoker. It appeared that these patients were carriers of the same mutation. We divided the patients according to the presence/absence of the described mutation. In order to assess the role of the proprotein convertase in regulating HDL-c levels in the two groups, we applied the Student’s t-test. No significant differences between the two groups were found (p=0.052), so the null hypothesis is true.

Lower extremity artery disease is a significant public health problem that impairs quality of life, as well as a major cause of cardiovascular morbidity and mortality [15]. Genetic investigation of LEAD is an evolving concept useful for understanding its pathogenesis and for identification of new therapeutic targets. Several studies suggest that the risk of developing LEAD is influenced by additional factors such as genetic anomalies and unstudied environmental components [14]. The study of PCSK5 gene is justified by its role in HDL-c metabolism, a major risk factor for LEAD. Thus, the detection of gene mutations could be correlated with the risk of developing or progression of the disease. It was suggested that some polymorphisms of PCSK5 gene could be associated with a variable expression that generates mild forms of atherosclerotic disease [16]. The expression of PCSK5 gene in atherosclerotic plaque is also important, because endothelial lipase has the maximum concentration in vascular endothelium, and its inhibition by the proprotein convertase would acts directly on the endothelial lipase. For example, Marchesi investigated the specific function of PCSK5 in endothelial cells and showed that knockout rats for PCSK5 gene mutations appeared more likely to develop the vascular ageing lesions than did the normal rats [17]. Cardiovascular ageing is known to be significantly associated with arterial stiffness and a reduced arterial diameter, caused by interstitial collagen deposition, leading to vascular disease [17]. Our study aimed to analyse PCSK5 gene mutations in patients with documented atherosclerotic LEAD by using a genetic screening method that identifies the number of copies of gene sequences. MLPA technique identified a heterozygous deletion of exon 9, namely loss of one half of amplified gene alleles. This lack of amplification may be caused by several conditions: complete exon deletion, partial exon deletion, exon mutations (point mutations, deletions, insertions, duplications, translocations, etc.) [18,19]. The mutation identified in exon 9 of PCSK5 gene was not associated with HDL-c levels. Although in our study the carriers of mutation were not related, they might have relatives with the same anomaly. This finding may be a starting point to establish if this mutation could be a family characteristic (through descendants). The study included only patients from the North-East region of Romania. Thus, it is interesting to find out if the discovered mutation could be a genetic feature for LEAD in this population. Secondly, the discovered gene mutation is present in subjects with advanced LEAD. It would be interesting to expand the study in patients with asymptomatic disease or early clinical manifestations. Thirdly, it is important to detail other aspects related to PCSK5 mutation such as cleavage of protein, interactions with the substrate, as well as the variability of expression levels in pathological conditions (e.g. interaction with growth factors receptors and enzymes). Also, MLPA is a fast method of screening but it requires confirmation by other methods such as PCR, qPCR, FISH, Southern blot etc. By using a confirmation method it is possible to exclude the presence of one of the three normal variants (polymorphisms) of PCSK5 gene described in literature [6,16,17]. Previous studies have documented the polymorphisms of exons 1, 12, 18, and introns 4, 7, 8, 11, 16, 17, 19, 20 in human atherosclerotic lesions [16]. Thus, the presence of this mutation should be addressed in studies by using other molecular techniques for an optimal characterization. In conclusion, the clinical significance of our data requires further studies using more complex genetic testing in larger cohorts.

This study is part of PhD thesis “Modern therapeutic approaches in lower extremity artery disease” and it was not supported financially.