Predictors of seizures after lateral skull base tumor resection: A retrospective study.

Copyright: © 2017 Wu/Li. This is an open-access article distributed under the terms of the Creative Commons Attribution License, which permits unrestricted use, distribution, and reproduction in any medium, provided the original author and source are credited.

Objective: Lateral skull base tumor resection can lead to many complications, including seizures. The actual cause of such seizures is not well understood. We carried out this retrospective study to help identify predictors of post-lateral skull base tumor resection seizures. Methods: Twenty-eight American Society of Anesthesiologists (ASA) grade I-II adult patients, aged 18-62 years who underwent lateral skull base tumor resection were included in this retrospective study. Clinical data were obtained from electronic medical records. Data on of operation time, anesthesia time, end tidal CO2 and use of dexamethasone, mannitol and furosemide were obtained from electronic anesthesia records. MRI signal value of temporal lobe on MRI was determined from preoperative and postoperative MRI images take taking from on the lesion side and from the contralateral side. Data were analysed using the Mann-Whitney-Wilcoxon test or the Chi-square test. Results: Of the 28 subjects in this study, 4 had seizures after surgery, 2 generalized and 2 partial. These 4 subjects were put into a group called S+ and the remaining 24 subjects were put into a group called S-. Comparison of clinical data for members of the two groups showed no significant differences in basic clinical characteristics, aside from preoperative total protein levels, which were significantly lower in the S+ group compared to the S- group (66.50 ± 5.26 vs. 73.42 ± 5.34). Interestingly, operation time and anesthesia time were significantly shorter in the S+ group (3.34 ± 1.67 h and 3.77 ± 1.64 h, respectively) compared to the S- group (6.84 ± 2.60 h and 7.35 ± 2.64 h, respectively). In addition, postoperative MRI signal value on MRI was significantly higher in the S+ group compared to the Sgroup (509.50 ± 24.91 vs. 411.79 ± 72.70). Conclusion: Acute temporal lobe swelling may lead to seizures after lateral skull base surgery, especially after surgeries lasting less than 4 h.

Lateral skull base tumors, most commonly glomus jugular tumors or acoustic neuroma, are located deep inside the brain. Thorough and meticulous surgical resection is the primary treatment for the majority of these tumors. These lesions are generally difficult to reach, thus resection can lead to many complications, including facial nerve palsy, hearing loss, cerebrospinal fluid leak and postoperative headache [1-3] and seizures [4].

In our practice we have observed that a fraction of patients undergoing lateral skull base tumor resection suffer seizures postoperatively. We performed this retrospective study with the goal of identifying predictors of post-operative seizures in these patients.

This was a retrospective study. Approval of the research protocol was obtained from Eye, Ear, Nose and Throat Hospital Ethics Committee for Human Studies. 28 American Society of Anesthesiologists (ASA) grade I-II adult patients, aged 18-62 years, with body mass index (BMI) 18-30, who underwent lateral skull base tumor resection from July, 2014 to December, 2015 were included in the study (cases of acoustic neuroma, facial neuroma, jugular foramen tumor, temporal bone tumor, external auditory canal carcinoma and cerebellopontine angle tumor were 13, 4, 7, 2, 1 and 1, respectively). Exclusion criteria included history of epilepsy and incomplete medical information. Subjects who experienced post-operative seizures were defined as the S+ group; those who did not were defined as the S- group. 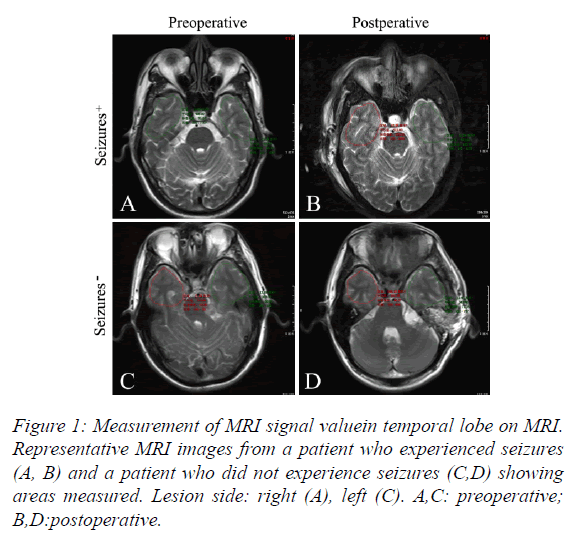 Figure 1: Measurement of MRI signal valuein temporal lobe on MRI. Representative MRI images from a patient who experienced seizures (A, B) and a patient who did not experience seizures (C,D) showing areas measured. Lesion side: right (A), left (C). A,C: preoperative; B,D:postoperative.

Of the 28 lateral skull base tumor resection patients included in this study, 4 had seizures in the recovery room after resection surgery. Two of these subjects experienced generalized seizures, and two experienced partial seizures. These patients were transferred to the postoperative intensive care unit (PICU), where seizures were controlled within 16 h using a combination of midazolam and sodium valproate. SPO2 never dropped below 95% during seizures or recovery period. These 4 patients were placed into the S+ group for the purposes of this study. The remaining 24 patients were placed into the Sgroup.

Clinical characteristics of S+ and S- groups are shown and compared in Tables 1 and 2. There were no differences between the two groups in terms of gender, age, body weight and height.

Table 2: Use of dehydration drugs and gender in patients with and without seizures (Comparison analysis was performed using the Chi square test with SPSS. S-: Patients; who did not experience seizures; S+: Patients who did experience seizures; M: Male; F: Female. No significant differences were observed).

The risks and complications of postoperative seizures are broadly recognized by neurosurgeons, but the actual causes of postoperative seizures are not clear. Two possible mechanisms that have been suggested are extravascular leakage of blood components leading to free radical generation, and ion imbalance across cell membranes caused by ischemia or hypoxia [9]. In this retrospective study, we found temporal lobe swelling after surgery in the S+ group, as evidenced by an increase in MRI signal value after surgery. In contrast, MRI signal value decreased after surgery in the S-group. Our current data does not allow us to distinguish whether the increased MRI signal value was the cause of seizures in the S+ group or the result of the seizures.

A case has been reported in which transient brain edema in the medial temporal lobe was induced by seizure [10]. Persistent restriction of cerebral diffusion and cytotoxic edema might be associated with seizures [11]. Break down of the blood-brain barrier due to mitochondrial encephalomyopathy lactic acidosis can lead to vasogenic edema [12]. The 4S+ patients in the present study suffered seizures in the recovery room not long after surgery. We postulate that these seizures could be due to abnormal discharge of temporal lobe neurons following disturbance of mitochondrial energy metabolism caused by pathological changes during surgery. Unfortunately, we did not do bispectral index monitor and examine of electrical activity of the brain monitoring during and after the surgery, so we are not able to confirm that hypothesis.

Acute temporal lobe edema may lead to seizures after lateral skull base surgery, especially after surgeries lasting less than 4 h. Further studies with larger sample size will be necessary to confirm these findings.