Methods: The retrospective analysis was performed on clinical data of 1,945 cases with thyroid tumor who were admitted to our hospital between January 2013 and March 2016. Also, the procedures of SNIM in emergency treatment for severe complications following surgery were summarized.

Results: SNIM was introduced to our department in 2008 and was modified based on original one in January 2013. In this study, 1,945 cases received surgical treatment. SNIM was executed since admission of these patients, including assessment of patients, design of medical care plan, regular assessment of complications after surgery for thyroid gland using the Postoperative Complications Modular Evaluation Sheet (PCMES) on shift basis, early detection of severe postoperative complicates and immediate treatment by collaboration with surgeons. After modification of the SNIM, patient satisfaction increased by 5.9%. The mean duration of stay was reduced by 3.4 d. Most surgeons and nurses believed that the modified SNIM was better to demonstrate professional skills of nurses and enhance collaboration with surgeons in management following thyroid gland surgery.

Conclusion: SNIM enables adequate assessment of medical condition and enhances surgeon-nurse cooperation during perioperative period. With such management, it is possible to make regular assessment of patients following surgery and provide immediate treatment if any severe postoperative complications are identified, which helps promote recovery following surgery and improve recovery rate and quality of life.

Thyroid tumor is a common tumor seen in endocrinology. According to the epidemiological study of thyroid disease, the mobility of thyroid diseases has raised to top 2 in the list of endocrine diseases in recent years [1-4]. The surgery for thyroid often causes a range of complications because the thyroid that is loaded with many vessels are adjacent to complex structures where are surrounded with abundant vessels and complicated nerves [5,6]. The Surgeon-Nurse Integrated Management (SNIM) was introduced to our department in 2008 and was modified based on original one in January 2013. In summary, the modified one includes regular assessment of complications after surgery for thyroid gland using the Postoperative Complications Modular Evaluation Sheet (PCMES) on shift basis, enhanced collaboration with surgeon during perioperative period, immediate treatment if any severe postoperative complicate is observed, early detection and early treatment to help recovery after surgery.

1,480 cases who received thyroid surgery between January 2008 and December 2012 were included in the control group. 1,945 cases who received thyroid surgery between January 2013 and March 2016 were included in the test group, including 392 males and 1,558 females at the age of 7-85 y (mean age of 48.96 y) with tumors ranged from 2 cm to 20 cm in diameter. In the test group, 1,361 cases had unilateral thyroid tumor and 584 cases had bilateral thyroid tumors, including 293 cases with thyroid cancer. The control group received conventional management. The test group received SNIM during perioperative period and regular assessment of complications after surgery for thyroid gland using PCMES. Patients in both groups could think and communicate normally and had no consciousness disorder and severe cardiopulmonary disorders. All patients received routine examinations before surgery. For patients with giant thyroid tumor, additional CT of neck was performed. No notable abnormality in motion and closure of vocal cords were observed in all patients according to laryngoscopy. All cases received surgical treatment and pathological examination after surgery. There were no significant differences in gender, age and type of diseases between two groups (P>0.05) (Table 1).

During hospitalization, patients in the control group were given with care provided by a surgeon and a nurse. The surgeon together with the nurse made ward-round and provided treatment for postoperative complications when detected.

Establishment of the SNIM mode for patients undergoing thyroid surgery (Figure 1): The surgeon team was separated from nurse team, but two teams worked together to provide SNIM for patients since admission. SNIM included assessment of patients, design of medical care plan, which ensured successful surgery for patients. After surgery, SNIM enhanced monitoring and assessed if any postoperative complication occurred using PCMES. The nurse was at good position to detect complications, and then reported to and worked together with the surgeon to treat complications. In case of severe symptom, immediate treatment was particularly provided to save patients. 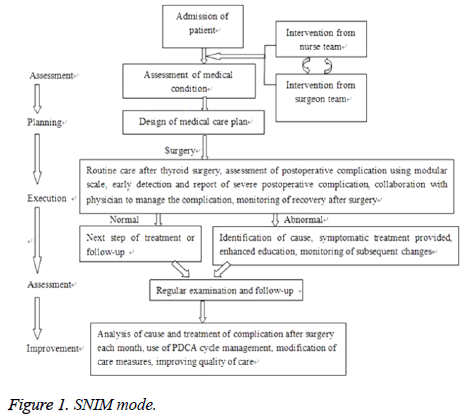 Design of PCMES: PCMES was designed based on the characteristics of postoperative complications and review of literatures. Four aspects including bleeding, dyspnea, hypocalcemia and thyroid crisis were considered as severe postoperative complications and listed in the module. Each module was consisted of emergent symptoms, analysis of cause and emergency treatment. Each part included specific items. The on-shift nurse was responsible for assessment and report to the surgeon. If any change occurred in medical condition, another assessment was conducted. If any symptom in the module occurred, the cause was analyzed and symptomatic treatment was given. Also, the nurse immediately reported it to the surgeon and worked with the surgeon for treatment.

Recent knowledge training: The literature study was conducted twice a month to keep the track with newest medical care for thyroid diseases in the world.

Observation and treatment for severe complications after thyroid surgery: The nurse collaborated with the surgeon to make ward-round based on the classification of care. The PCMES was used to assess medical condition of patients including wound, area surrounding the wound, drainage liquid, vital signs, symptoms such as numbness of lip, mouth, face, hand and foot or convulsion of four limbs. When any of the above symptoms in the PCMES occurred, symptomatic treatment was given and this event was immediately reported to the surgeon. For patients with bleeding, sandbag was used to compress the wound to stop bleeding and ice pack was used. If it was not effective to stop bleeding, this event was reported to the surgeon to seek for help. To stop bleeding, 2 mg of noradrenaline in 50 mL of cold saline was injected to drainage tube. For severe patients, surgical haemostasis was performed. If dyspnoea occurred, drainage tube was slightly adjusted and flushed to draw the blood clot and hence alleviate symptoms. When severe dyspnoea occurred, treatments such as hematoma clearance, tracheal intubation and tracheotomy were provided based on individual conditions. When numbness of lip, mouth, face, hand and foot, or convulsion of four limbs developed, treatments including calcium supplement, blood calcium monitoring and parathyrin were given according to medical order. When high fever and rapid heart rate developed, it warranted thyroid crisis and symptomatic treatments including oxygen inhalation, temperature lowering, sedative, oral thyroid drug, intravenous drip of hydrocortisone were given to prevent life-threatening risk.

The specific patient satisfaction questionnaire was used to determine the satisfaction of patients. The satisfaction and mean duration of hospitalization were compared between two groups. 15 surgeons and 18 nurses were surveyed to determine their opinion on new and old management mode after thyroid surgery. 33 questionnaires were distributed and 33 effective questionnaires were collected, which meant the response rate was 100%. The questions included whether procedures of management after thyroid surgery was optimized in new mode, whether the profession of nurses was improved, whether it could improve the ability of nurses to identify and manage severe complications, and whether it could promote surgeonnurse cooperation.

SPSS 17.0 software was used for statistical analysis. The measurement data was expressed as mean ± standard deviation (± s) and analyzed by t-test. The enumeration data was analyzed using X2 test. P<0.05 was considered as statistically significant.

Surgery was successfully performed in 1,945 cases with thyroid tumor. 168 cases developed different complications after surgery. In the test group, there were 64 cases with severe complications, including 16 cases with bleeding, 3 cases with dyspnoea, 44 cases with numbness of hands and feet or convulsion due to hypocalcemia, and 1 case with thyroid crisis. 1 case received tracheal intubation, which was removed four days later. 1 case developed low oxygen saturation and severe dyspnoea following surgery due to tracheomalacia and tracheal collapse caused by persistent comprehension on trachea by giant tumor. Thanks to early detection and immediate report to the surgeon by the nurse, immediate tracheotomy was performed to resolve airway spasm and ventilation dysfunction. 1 month later, the tube was closed. The patient had recovered from dyspnoea, had normal motion of vocal cord and could speak relatively well. Hence, the tracheal tube was removed. This case was recovering and no severe consequence occurred. No death occurred in all cases. The patients were followed for 6-36 months and recovered well (Table 2). After modification of SNIM mode, the satisfaction of patients increased by 5.9%. The mean duration of hospitalization was reduced by 3.4 d (Table 3). Majority of surgeons and nurses suggested that the modified SNIM mode was more helpful to demonstrate professional skills of nurses and enhance collaboration with surgeons in management following surgery for thyroid gland (Table 4).

Table 2. Comparison of complications after application of SNIM after thyroid surgery.

Table 3. Comparison of mean duration of hospitalization and satisfaction between two groups.

SNIM is also known as surgeon-nurse cooperation, which was first proposed by American Nurses Association. It is a process reliable cooperation between surgeons and nurses. During the process, surgeons and nurses recognize and accept their behaviours as well as their responsibilities, and protect their benefits and work together to achieve their goals [7-9]. SNIM was introduced to our department in 2008 and was modified based on original one in January 2013. The new SNIM includes regular assessment of complications after surgery for thyroid gland using the Postoperative Complications Modular Evaluation Sheet (PCMES) on shift basis, enhanced collaboration with surgeon during perioperative period, immediate treatment if any severe postoperative complicate is observed, early detection and early treatment of severe complications.

Complications commonly occur following surgery for thyroid because the thyroid has special anatomical location where has complex adjacent structures including abundant vessels and complicated nerves, and the severer ones include bleeding, dyspnoea, hypocalcemia and thyroid crisis. Many factors are involved in occurrence of complications after thyroid surgery. Bleeding often occurs within 24 h after surgery, which is often caused by inadequate homeostasis during surgery or dislodged stitches. Dyspnoea is frequently triggered by injury of bilateral recurrent laryngeal nerve, compression by hematoma, laryngeal edema or tracheal collapse. Hypocalcemia is resulted from injury of parathyroid gland. Thyroid crisis is the severest complication after thyroid surgery, mostly due to inadequate control of thyroid function before surgery, over stretch during surgery and stimulation of thyroid gland. If the above complications are detected as early as possible and early effective treatment is provided, it is often able to correct the complications and avoid severe late complications [10-13]. Conversely, if they are not detected and treated at early stage, they tend to cause severe late complications and even lifethreatening danger. Therefore, it is important to enhance perioperative care, especially postoperative monitoring and treatment.

The original management mode after thyroid surgery had some limitations, such as many factors for complications following thyroid surgery, complicated nursing work, variant levels of professional skills among nurses, insufficient experience faced by younger nurses, and sometimes missing of monitoring and care. In the new SNIM following thyroid surgery, the PCMES is used to assess medical condition of patients per shift, which summarizes the symptoms of severe postoperative complications, analysis of causes and immediate treatments in a clear way. This enables nurses to get key points, take initiative in thinking and report the events to surgeons. Thereby, the complications can be addressed efficiently. In this group, all cases were managed using the SNIM mode since admission. The excellent communication between nurses and doctors ensured that all medical care procedures are well connected. Thanks to early detection of severe complications and good cooperation with surgeons to treat the complications, favourable outcomes were achieved, including lower rate of another surgery, improved prognosis of patients, faster recovery of patients, reduced duration of hospitalization and more satisfaction of patients.

The authors have no conflicts of interest to declare regarding this article.