Necrotizing Fasciitis (NF) and sepsis shock is a rare disease in human caused by bacteria infection which is detrimental to patients. We report the diagnosis, progress, treatment and prognosis of patients with NF and sepsis shock caused by Aeromonas hydrophila (A. hydrophila). A 64 y old man was admitted for Gustilo type-iii B open fracture of the left tibia and fibula. Debridement and exopexy were carried out immediately after which he received liquid infusion and empirical antibiotic therapy in ICU. However, the condition became worse 24 h later and large extensive necrosis of the fascia and surrounding tissue was observed and the patients was in hypodynamic septic shock. Therefore, the infected limb was amputated and in the meantime, culture test for the necrotic tissue revealed presence of A. hydrophila and Klebsiella. Piperacillin and Tazobactam were applied to the patient for eliminating klebsiella and A. hydrophila respectively. Eleven weeks after admission, all blood biochemical parameter recover to normal and the patient was discharged. We present a rare case of A. hydrophila NF and sepsis shock in an elderly patient and suggest that resecting debridement of necrotic fascia and even limb-amputation is required for successful treatment.

Aeromonas hydrophila is gram-negative bacteria and is member of the family Vibrionaceae. It is mainly found in sewage, fresh or brackish water, soil, tap water, and nonfecal organic materials [1]. They can cause variety of infections including gastrointestinal bleeding, skin and soft tissue infections, sepsis and other syndromes [2]. Thus, the understanding of the feature and treatments will be beneficial for treating them in clinic application. Necrotizing Fasciitis (NF) is a rapidly progressing fatal lesion in the skin and muscle tissue for mixed infection [3]. There are sporadic reports of cases of sepsis or necrotizing fasciitis caused by A. hydrophila but no case of severe infection secondary to trauma. Here we present the clinical course of a patient suffering necrotizing fasciitis and sepsis caused by A. hydrophila after traumatic injury. Furthermore, we used the PubMed database to search for recent case reports of infections caused by A. hydrophila. 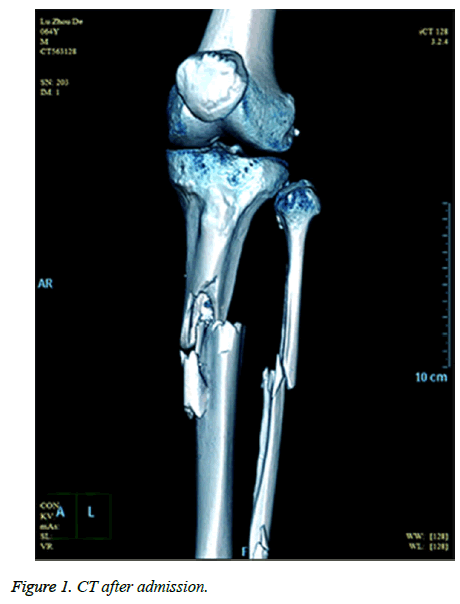 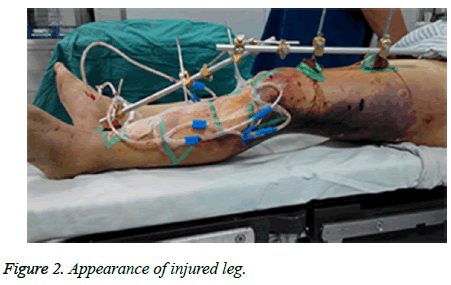 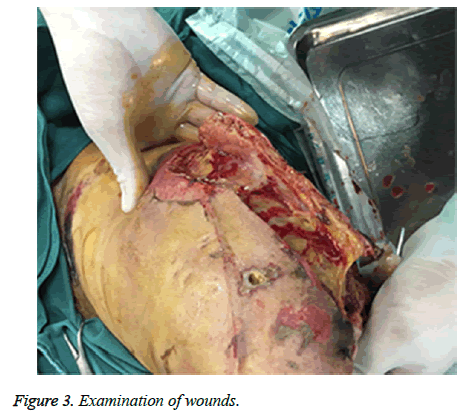 Patients’ family initially refused amputation at higher level and the patient was brought to the operating room for revisiting the left leg, including debridement, and Vacuum Sealing Drainage (VSD). Imipenem 1.0 g × 4 and tigecycline 50 mg × 2 were administrated instead for antibiotic therapy after sepsis shock occurrence. After surgery, the patient remained febrile, hypotensive and oliguric renal failure with a greater demand for vasoactive medications and rising lactate concentration (from 2 mmol/l to 5 mmol/l). On the fact of obvious extremis, the family agreed and the patient received middle of left leg amputation below hip and VSD irrigation. During the surgery the patient received multiple units of packed red blood cells and fresh frozen plasma. The patient had progressive multiorgan failure and deteriorating renal function requiring hemodialysis. After 72 h, Culture test confirmed the presence of A. hydrophila and Klebsiella in wound tissues but not in blood and sputum samples. A. hydrophila is sensitive to cefuroxime, cefotaxime, ciprofloxacin, gentamicin and trimethoprim but resistant to ampicillin, while Klebsiella is sensitive to ciprofloxacin, imipenem, amikacin, piperacillin and tazobactam but resistant to cefotaxime, ceftriaxone and ampicillin. Antimicrobial susceptibility was tested in laboratory. piperacillin and tazobactam 4.5 g × 6 were administrated instead for antibiotic therapy based on culture test and antimicrobial susceptibility tests. Two weeks after, Klebsiella and A. hydrophila were eliminated two and three weeks, respectively later. the patient received 7 times VSD irrigation and debridement to the amputation stump until all necrotic tissue was debrided (Figure 4). In total, the patient was admitted for eleven weeks (including nine weeks in ICU) and white cell count, CRP and Procalcitonin turned normal. He can walk with crutches and move with wheelchair for short distance. The patient was discharged and followed-up at regular intervals. 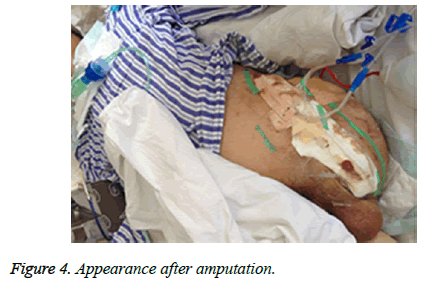 Based on available literatures from PubMed Database, clinical parameters of 10 relevant cases were summarized in Table 1. There were 8 males and 2 females, with a mean age of 59 y old (30-72). Among them, eight cases suffered systemic infection with predisposing factors such as hemodialysis, immunosuppression, diabetes and chronic liver disease. Five cases were without contact history with any aquatic animal, so the infection source could be stagnant water with microorganism and the infection could occur via traumatic penetration through tiny breaks in skin. All cases had been admitted in ICU, with mean duration of 30 d (3-63). Besides A. hydrophila, other pathogens were found in 4 cases. Adequate antibiotics were initially administered for empiric therapy and excisional debridement of the necrotic fascia or immediate limb amputation was performed early to all patients. However, 8 patients recovered while 2 patients died finally.

Table 1. Clinical parameters of patients with A. hydrophila infection.

Aeromonas hydrophila are gram-negative bacilli commonly found in aquatic environments [4], such as stagnating, streaming surface water, wells and even swimming pool [5]. They can also cause diseases in humans including gastroenteritis, water-associated traumatic wound infections including necrotizing fasciitis, meningitis, peritonitis, and bacteremia [6]. Necrotizing Fasciitis (NF) is a deadly necrotic inflammation of skin, soft-tissues, and muscle bundles [7]. The mechanism has been found to be accounted for A. hydrophila infection, which is injury of soft skin tissue, and leading to sepsis and secondary necrotizing fasciitis [8].

We analysed A. hydrophila infection in soft skin tissue in the present case and summarized that in previous reported cases. Most of these patients can be considered immunosuppressed to some degree because of certain medical conditions, such as hemodialysis, immunosuppression, diabetes and chronic liver disease. The mechanism responsible for the severe course of A. hydrophila infection involves production of highly toxic exotoxins, such ascytolysin, hemolysin, cytotoxic enterotoxin, and cholera toxin-like factor [9]. In the 10 cases summarized, only 5 cases (half of ten) were infected through wound exposure and necrotizing fasciitis attributable to A. hydrophila were believed to develop only in an immunocompromised host. And in this sense, sepsis shock, a most invasive form of infection, may be also as a result of immunocompromising in the presence of infection.

Necrotizing fasciitis and sepsis caused by A. hydrophila were associated with high mortality, thus early surgical intervention was essential [10]. Some investigators have reported that A. hydrophila infection can cause severe necrotizing fasciitis and myonecrosis. Early and aggressive surgical intervention must be applied immediately after necrotizing fasciitis is diagnosed as patients could die due to delayed surgical removal of necrotic lesions (including amputation) [11,12]. For our patient, broad-spectrum antibiotics were administered within one hour after sepsis was identified and aggressive multimodality treatments together contributed to patient's prognosis. Including our patients, among the ten cases summarized patients were benefit to receiving excisional debridement of the necrotic fascia or early limb amputation.

In conclusion, together with previous study, a general treatment against A. hydrophila infection can be arrived. And the empiric Antibiotics which should be used started in cases of suspected necrotizing fascitis before treatment. Firstly, rapidly progressing of soft-tissue infection could indicate A. hydrophila infection. Secondly, aggressive antibiotic drugs were essential to administered for empiric therapy. Thirdly, early diagnosis of all forms of A. hydrophila infection is of significance, especially in the case of necrotizing fasciitis and sepsis. Fourthly, amputation, debridement and VSD irrigation in combination with appropriate antibiotic treatment should be applied for good prognosis.