Medulloblastoma is an extremely rare disease in adults. After surgery, the mainstay of treatment is based on chemotherapy and radiotherapy, that provide 5 year suvival rates of 50-80% according to risk factors. Post-therapy nauronal maturation in medulloblastoma is a rare event that has been described only in pediatric age. Here we report the case of neuronal maturation after chemotherapy and radiotherapy in an adult patient. We also assessed that molecular SHH grouping with Illumina Human Methylation 450 k Bead Chip arrays showing that this molecular feature was stable during this maturation. We also discuss about treatment approaches in this rare situation.

Medulloblastoma (MB) is the most common malignant brain tumor in children, but in adults the disease is extremely rare and accounts for less than 1% of all intracranial malignancies [1]. Recent studies have shown that MB is not a single disease but in fact comprises a collection of clinically and molecularly diverse tumor subgroups both in children and in adults. The current consensus is that there are four major subgroups named WNT, SHH, Group 3 and Group 4. These four molecular subgroups are found across all age groups, but they occur at strikingly different frequencies within each age group [2]. In adults, the SHH subgroup represents by far the largest subgroup, accounting for 57% of all tumors. Among the four histological variants classic, large cell/anaplastic (LCA), nodular/desmoplastic (ND) and MB with extensive nodularity (MBEN), the last two in most of the cases belongs to the SHH molecular subgroup. Interestingly, post-therapy neuronal maturation has been reported prevalently in ND and in MBEN and the totality of cases showing such favorable evolution has been reported in the pediatric age.

A 20 year old female patient started complaining of a headache and vomiting. A brain MRI showed the presence of a 43 × 43 mm lesion on the left hemisphere of the cerebellum, with irregular contrast enhancement and hydrocephalus (Figure 1A). The patient had a ventricular shunt put inand underwent sub-total resection of the cerebellar mass. 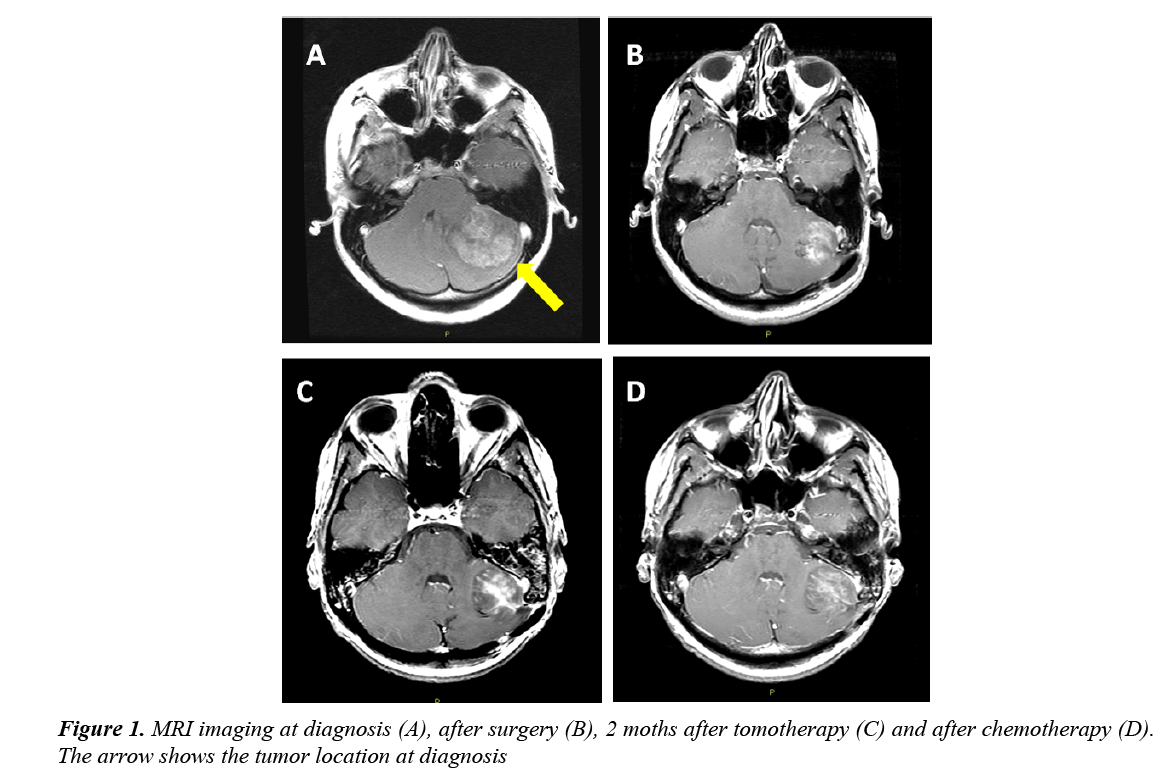 Figure 1: MRI imaging at diagnosis (A), after surgery (B), 2 moths after tomotherapy (C) and after chemotherapy (D). The arrow shows the tumor location at diagnosis

The tumor showed the histological features of a nodular/ desmoplastic medulloblastoma (MB) caracterized by pale islands surrounded by densely packed neoplastic cells (Figures 2A and 2B). The internodular areas showed frequent mitotic features with focal anaplastic changes characterized by enlarged end pleomorphic nuclei with atypical mitoses. By immunohistochemistry, the pale islands showed strong immunoreactivity for synaptophysin compared to the internodular areas. The prolifration index evaluted by Ki-67 reached 60% in the internodular areas and 3% within the nodules. 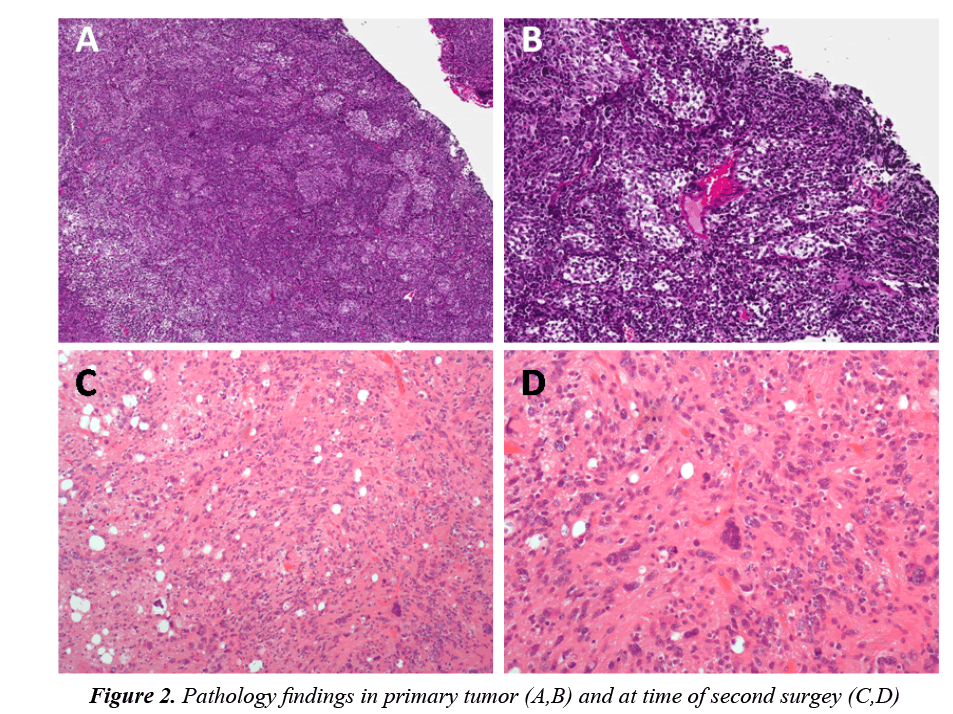 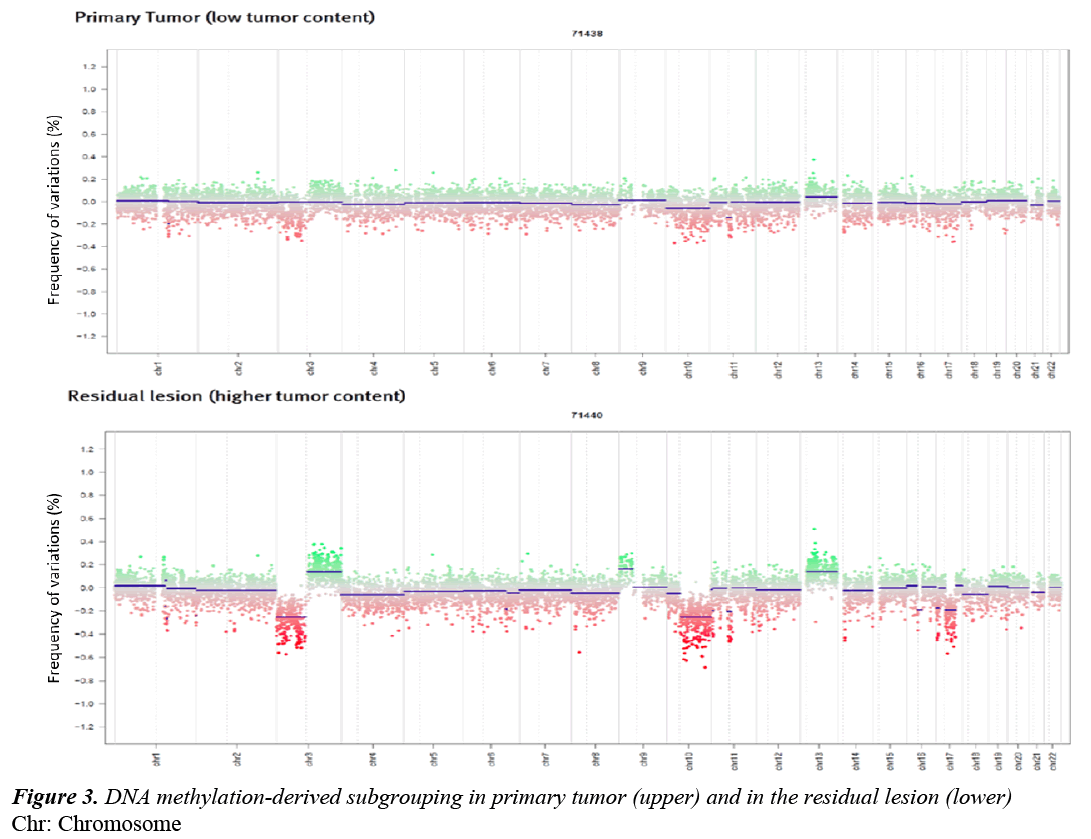 Post-operative cranio-spinal MRI confirmed the presence of residual disease (Figure 1B) and the absence of spinal metastases. Cerebrospinal fluid was negative for neoplastic cells. The patient underwent ovaric tissue preservation and received cranio-spinal tomotherapy (32.4 Gy in 18 fractions) with a boost on posterior fossa (23.4 Gy in 17 fractions, total dose: 55.8 Gy in 32 fractions). A brain MRI performed two months after the end of tomotherapy revealed a minimal volumetric increase of the residual lesion (Figure 1C). The patient underwent two cycles of chemotherapy with Cisplatin 25 mg/m2 on days 1 to 4 and Etoposide 40 mg/m2 on days 1 to 4 every 28 days [4-8]. An MRI performed after two cycles showed no reduction inthe areas of contrast enhancement of the lesion. (Figure 1D). Given the radiological persistence of the disease, the patient underwent surgery and the removal was almost complete.

The tumor specimen obtained at the second surgery showed a neoplasm composed ofneuronal cells showing various degrees of maturation from neurocytic to ganglion cells. No embryonal cells were present. Mitoses were absent. A strong and diffuse positive staining for synaptophisin was observed, the Ki-67 proliferation index was only 2% (Figures 2C and 2D).The residual lesion showed the post-therapy neuronal maturation of a medulloblastoma. Histological examination revealed neuronal maturation of the neoplastic cells.

No other treatments were delivered after the second resection. To date the patient is still alive 44months after primary surgery, with no radiological signs of disease relapse.

Here we report a case of MB in an adult patient showing a post-therapy neuronal maturation and a favourable outcome.

Post therapeutic neuronal maturation is a rare event that can occur in some pediatric neoplasms, such as neuroblastoma and MB [9-14].

To our knowledge, this is the first case of neuronal maturation in an adult patient with MB.Moreover, none of the cases present in the literature have been investigated for the molecular subgrouping [2,15].

Preclinical studies evaluated the role of retinoic acid (RA) in the induction of differentiation and blocking cell growthin MB. RA can induce neuronal differentiation in neuroblastoma cells [16]. A similar effect was also demonstrated in MB cell lines with both all-trans-retinoic acid (ATRA) and 9-cis-retinoic acid [17-19]. However, clinical data have not confirmed this background.

Treatment-induced maturation is a phenomenon that has also been observed in other tumors of embryonal origin, such as embryonal testicular germinal cells tumor (GCT). Indeed, it has been observed that in some cases, following treatment with platin, residual masses have differentiated teratomatous histology [20].

In the case we reported, the decision to avoid further treatments after the second surgery was based on different reasons. First of all, the patient had already received chemotherapy after radiotherapy. Furthermore, the diagnosis of tumor maturation, with an important reduction of proliferation index, discouraged the administration of chemotherapy, given the fact that differentiated cells are more resistant to cytotoxic agents (as has already been seen in testicular cancer maturation) [20].

Tumor maturation is a well known event in pediatric tumors. However, due to the rarity of medulloblastoma in adults, this phenomenon has not been described before.

However, physicians who treat adult patients with neuroectodermic pediatric tumors (i.e. PNET, medulloblastoma) should take into account that tumor maturation may occurr and that its recognition is essential to define the prognosis and to manage patients.