Ultrasound represents the technique of choice for the diagnosis of placental accreta in the second and third trimester where the presence of placental lagoons is the sign that has the highest sensitivity of 93 percent [1-4]. It is associated morbidity is mainly caused by the high risk of massive hemorrhage, infection, and injury to adjacent organs. Estimated blood loss is three to five liters. Representing a high Maternal Mortality of 7 percent in developed countries [5].

Placental Acreta is classified according to the degree of invasion to the Myometrium of corial villi. Acreta the chorial villi inserted directly over the Myometrium. It’s reprented 80 percent of cases followed by placenta increta where they invade Myometrium and represent 15 percent of cases. Placenta percreta account for five percent and invade bladder serous and other organs [5,6].

The purpose of this case report is to describe our experience in five case placentae accrete during a period of 3 years. By sharing our clinical experiences, we learn. The author considers it is important to share and describe how to diagnose and treat this true obstetric emergency.

The average age was 28 years old. With 37 weeks of pregnancy. All case with the same risk factors as placenta Previa and history of previous caesarean section. In one patient with two curettage story. The diagnosis of primary care by ultrasound was Occlusive placenta Previa without current history of transvaginal bleeding. In all case hysterectomy was performed after caesarean section with multidisciplinary team.

Main ultrasound finding in order of frequency are lacunar beds in all cases. Followed by Doppler color turbulent flow that included bladder serosa line and absent clear zone in the hysterorraphy site (Figures 1-3). In all cases it was observed by ultrasound fine lines like velvety hair were noticed between the placenta and serous bladder distorting the line of the bladder serosa. Surgical macroscopic finding is bladder serosa distorted with marked vascularization and tortuous vascular network. In all case is active red code. Multidisciplinary team participation. Blood loss during cesarean delivery was 2000 ml. All case they needed blood transfusion average four globular packages.

Figure 3: Absent clear zone in the hysterorraphy and disorder and turbulent flow Doppler.

No bladder injury reported but one patient presented bowel laceration that require repair in the same surgical time. There were no maternal deaths. In all case the fetal Doppler ultrasound was performed late near 37 weeks’ gestation. This complicates the doctor on duty with great coordination effort. We learned is necessary share case and ultrasound image and surgical finding to improve early diagnosis. One of the strengths identified is the communication through What UP Groups, where all of the medical and administrative team are in action according to roll (Figure 4). 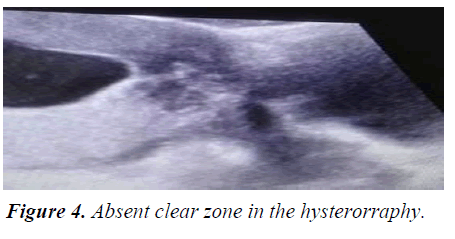 The Success of placental accreta treatment requires identifying risk factor, such as placenta Previa and history of previous caesarean section, or history of curettage. In this context it is mandatory to perform an early fetal Doppler ultrasound. This also depends on the Anticipation and with the most experienced and Multidisciplinary team to avoid Emergency situation. Lacunar beds with turbulent Doppler color flow and clear zone absent is the most frequent presentation ultrasound image.

We consider in some case is a good choice delay the surgical treatment in patient without bleeding or labor until all the human team and materials is completed. Blood bank should always maintain emergency backup.

The cornerstone in prevention is promote institutional efforts to reduce the rate of unnecessary cesarean sections. also efforts at early ultrasound diagnosis, taking into account the variables always present, history of cesarean section with placenta Previa or history of curettage because is the origin of the problem.

Patients with HIV are more susceptible to respiratory infections while HIV is not well treated. At the same time, immune deficiency status in HIV patients may lead to less detectability of SARS-CoV-2 virus and worse clinical condition.

Early detection of symptoms for mucor like cheek swelling, blackening etc got to be reported immediately. Furthermore, if a CT scan finds a mucormycosis fungus, then there's a gold standard treatment and also removing dead tissue through surgery. Clinical suspicion and prompt treatment are fundamental to realize the cure of the disease. More studies are necessary to determine if these two pathologies are related.