Background: Premature failure of the nail with an unstable fracture may lead to non-union, nail migration and shortening. The objective of the study was to determine the mechanical properties of Intramedullary Tibia nail. Materials and methods: In a basic concern, the intramedullary nail was used to enhance the bone healing in spite of external fixator. Finite element analysis was performed to examine the performance of titanium alloy based nail under three type load (axial, lateral and torsion). Mechanical testing (Static bending, fatigue and torsional testing were conducted on titanium alloy (Ti-6Al-4V) Tibia nail. The stiffness of the implant-bone construct and movement of the fragments were tested under axial loading and torsion. The constructs were tested to failure under cyclic fatigue loading. Results: The maximum stress was concentrated at contact area of standard nail. For the new nail the maximum stress was showed at contact area when same force applied. Moreover, the stress developed in the new nail was similar as standard nail. The mean bending stiffness was 120.62 N/mm while the maximum run-out bending moment was 22.8 Nm at 600 N load without any fracture under fatigue load. The mean torque was 65.56 Nm when IMFD was set to be a maximum angle of 100 degrees. Conclusion: From biomechanical point of view, this titanium based nailing system is more preferable implant for tibia fracture osteosynthesis.

Tibial fractures are the most universal long bone injury. Various methods of managing tibial fractures have been described in the literature over the years, ranging from functional bracing, plaster, compression plating external fixation and intramedullary (IM) nailing [1-8]. For a tibia fracture, the rate of healing can be controlled by stiffness and rigidity of the fixation along with the degree of compression applied [9,10]. The shear force and axial compression which develops as a result of movement and twisting of bone fragments [11,12]. So if the appropriate load is applied to the fracture site it will encourage the healing process [13,14].

For the case of the intramedullary nail, it is a universally recognized fixator to fix close tibial fractures. It has several advantages over other fixators like better alignment and mobility of the patients and also patient return to normal lifestyle faster [15]. Most often the nails placed inside the patient to heal the fracture is left inside the patient’s body also after the full recovery of the fracture, therefore, it is very important to verify the strength of the nail by the implant manufacturer [16-20]. Finite element analysis provides effective and accurate results in the field of orthopedic research. The computational simulation provides a better visualization for stress concentration along the structures, and provide an idea about the proof load. It also provides comprehensive results in physical response of a system including several responses which might have been neglected in analytical approach.

Presently, ASTM F1264 standard implements the test methods for studying the mechanical properties of intramedullary fixation devices like static bending test, fatigue test, and torsion test [18]. Four-point bending test was also defined in the standard for testing of tibia nail. The extant test methods are suited for studying torsional and relative bending performance individually in a single load mode at a time. For the void implant, the four-point bending test fixture induces localized surface loads and consequences in an unrepresentative load-deformation. Additionally, the four-point bending test does not induce any axial loading-this load component is important, for example, for limb lengtheners. The full three-dimensional loading during testing introduces a more realistic load scheme for the fixation devices. In this study, we pursue to improve the testing of tibia implants so that multi-axis load conditions can be accounted for. The challenges are the reproduction of a three-dimensional loadcombination into an implant connected to the test fixture. Moreover, a controlled load sequence must be produced at different load rates to practically produce the entire fatigue load spectrum existing due to the patient walking in real-life events. The principles of load components acting on the femur during the patient ’ s movement and the fundamental difference between the standard four-point bending loads and those of a multi-axis fixture.

The aim of this study was, therefore, to assess the mechanical performance of nails with angular stable interlocking in distal tibia shaft fractures. Mechanical stability was assessed by measuring stiffness, intra-fragmentary movement and fatigue under mechanically relevant and physiologically realistic loading conditions.

Model of Interlocking and expert tibia nail was set up with appropriate boundary conditions, including constrained of the nail implant at 76 mm distance from both end and the load was applied in the middle direction when fixed in the horizontal direction. FEM analysis was performed using ABAQUS software for a model made of Ti-6Al-4V alloy. FEA simulations were based on the guidelines given in ASTM F1264-16 (Tables 1-5).

Table 3. Dimensions of the test setup.

Two nails of length 375 mm length and diameter 8 mm and 12 mm are taken for the analysis. From here we can select the nail diameter based on worst-case analysis for further testing (Figure 1). 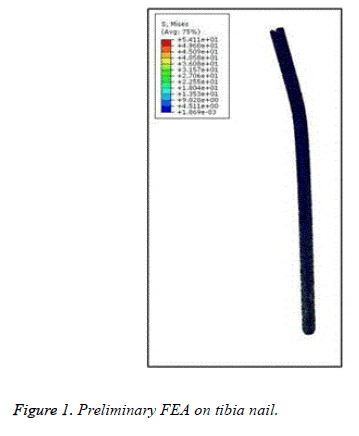 From analysis of above results we have taken nail of 8 mm diameter due to its lowest yield load and bending strength amongst all nail diameters.

The static bending test, fatigue test and torsion test were performed on the intramedullary tibia nail. Total 19 implant samples of 8mm diameter and 375 mm length were chosen to perform a test of Titanium (Ti-6Al-4V) material. 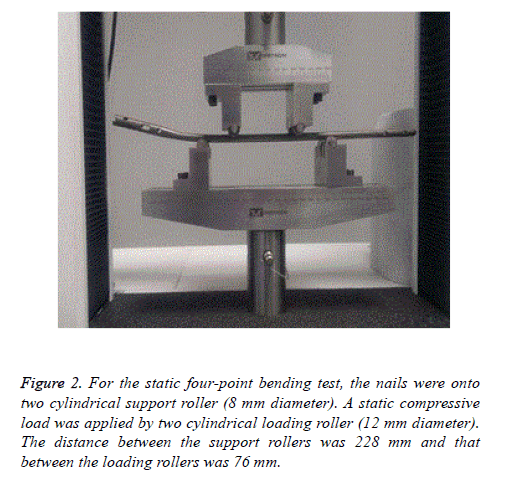 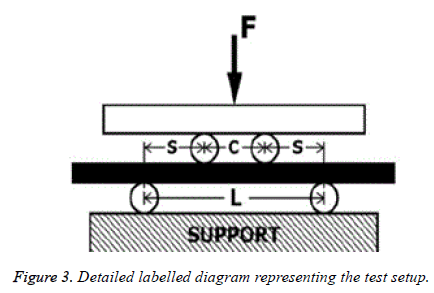 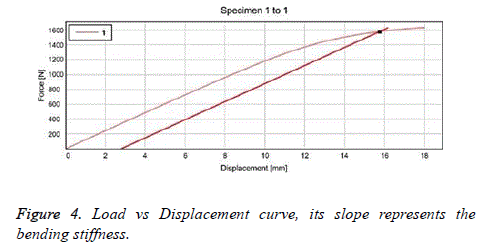 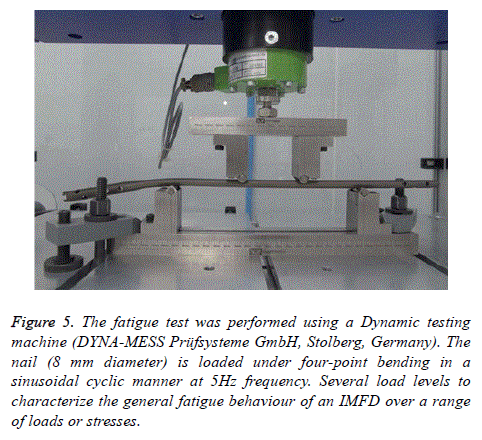 Figure 5: The fatigue test was performed using a Dynamic testing machine (DYNA-MESS Prüfsysteme GmbH, Stolberg, Germany). The nail (8 mm diameter) is loaded under four-point bending in a sinusoidal cyclic manner at 5Hz frequency. Several load levels to characterize the general fatigue behaviour of an IMFD over a range of loads or stresses.

S: Lateral distance between a supporting roller and loading roller

L: Distance between the supporting rollers

An axial displacement rate of 5 mm/min was used for the test. The test was stopped when the machine limit was reached or upon implant failure. All tests were performed in ambient air at room temperature.

The static bending test was performed using a universal testing machine (Instron, Norwood, Massachusetts, US) with a 5.0 KN load cell and computerized digital control (WaveMatrix, Instron, US). The test was performed on 5 implant samples to determine the exact yield load. The graph was generated between load and displacement (Figure 3). The bending stiffness, bending moment to yield and bending structural stiffness was calculated manually by the following formulas.

• Where:F=Yield load, S=the span from a load point to the nearest support

The slope of the elastic portion of the load-displacement curve.

Where S=the span from a load point to the nearest support, L=the total span (c+2s), c=the centre span, F/y=Slope of the elastic portion of the load-displacement curve.

The fatigue test was performed on 9 samples. All the 9 samples were divided into 3 categories, 3 implant samples each. The load was distributed as per the mean yield load calculated in static bending test.

The load applied on the test samples as 25%, 50% and 75% load of mean Yield load determined in Static bending test and done on 3 samples for each load.

Finally, Torsion testing involves the twisting of a sample along an axis and is a useful test for acquiring information such as torsional shear stress, maximum torque, shear modulus, and breaking angle of a material or the interface between two materials.

Before starting the test, we have to fix either angle or torque but here we need to find out the torque applied on the implant at different angles from breaking point. We will fix the angle of 100 degrees to determine the torque. The test was performed on 5 implant samples. The testing was performed at a speed of 18°/min in position control (Figure 6). 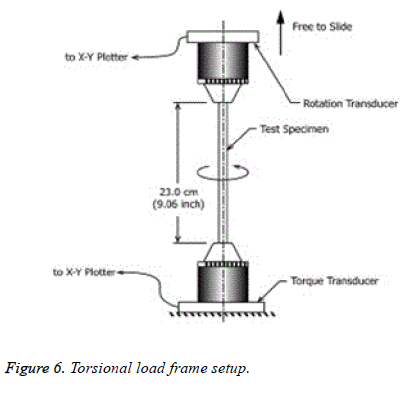 Interlocking Cannulated Tibia Nail of 8 mm diameter is selected for the test as worst case due to its lowest yield load and bending strength amongst all nail diameters.

During testing, the IMFD was set to be maximum angle i.e. 100 degrees, before reaching the maximum angle, all the nails were fractured at a definite torque. The mean torque is65.56 Nm.

Preliminary Finite element analysis (FEA), in our study provides us the validations for the use of nail of certain dimensions it has been used to predict the influence of different forces and for a better understanding of geometry [20]. Carlos et al.,suggested titanium as an ideal biomaterial for implants as it has a low density, high mechanical and fatigue strength, low elastic modulus and good wear resistivity (Figure 7). 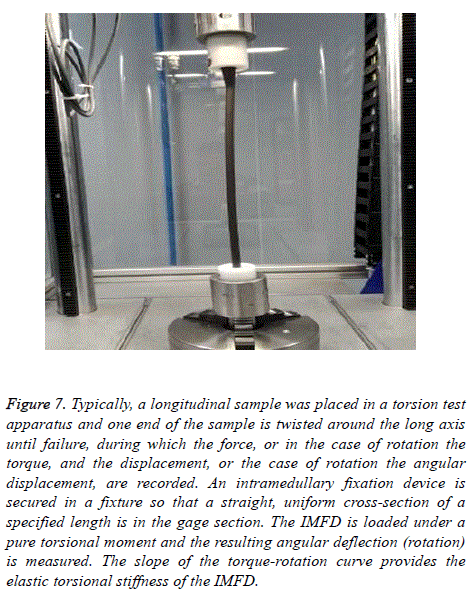 Figure 7: Typically, a longitudinal sample was placed in a torsion test apparatus and one end of the sample is twisted around the long axis until failure, during which the force, or in the case of rotation the torque, and the displacement, or the case of rotation the angular displacement, are recorded. An intramedullary fixation device is secured in a fixture so that a straight, uniform cross-section of a specified length is in the gage section. The IMFD is loaded under a pure torsional moment and the resulting angular deflection (rotation) is measured. The slope of the torque-rotation curve provides the elastic torsional stiffness of the IMFD.

This study requires several different multi-axis test fixtures. The correct implementation of the testing method requires a deep understanding of operation limits. The finite element analysis can be used for estimating alternative materials but only by doing validations of more practical models through representative study reveal us to real-world scenario [19]. The multi-axial loading used in this study offers a more accurate loading conditions for the motion of patient with a tibial fracture. This study also has some limitations like when we do a biomechanical study, exact biological processes cannot be simulated. The loading values are taken resembling loads on a knee joint. Thus we can assume that the loads taken are mechanically and physiologically realistic.

The major outcomes of our study which is done on tibial nails manufactured by Auxein medical Pvt. Ltd. are; mean bending stiffness was 120.62 N/mm while the maximum run-out bending moment was 22.8 Nm at 600 N load without any fracture under fatigue load. The mean torque was65.56 Nm when IMFD was set to be a maximum angle of 100 degrees.

According to Georg et al., with a short working length the implant’s loading strength can be increased up to the yield strength of material used. Furthermore, the strength of fixation also depends very much on the strength of locking screw, according to experiment by Hou et al., demonstrated the effects of the design and microstructure on the mechanical strength of tibial locking devices, test results showed that fatigue and yielding strength is directly depending on their section modulus of inner diameter of the locking screws. Thus we acknowledge that further studies are required to statistically validate the strength of the tibial fixation in real world by clinical studies [19,20].

In this study we demonstrated different load transmissions which then leads to different types of failure in the intramedullary tibia nail. Titanium (Ti-6Al-4V) is chosen as a test material due to its inert and biocompatible nature along with good mechanical properties. For the mechanical testing, four-point bending fixture was used for the static bending test and fatigue test but the torsion test, there was a different fixture were used so the multi-axis test fixture can be used to create a very accurate set of compression, bending and torque during a quasi-static test for the design of intramedullary implants. The results can be used for having an idea for further clinical studies.